The Cardiff four-piece pay homage to their classic-rock heroes on a quick-witted and resolutely unpretentious debut album.

The first months of 2022 have doubtless had many of us experiencing pangs for another, simpler time before Covid, apocalyptic storms and the terrifying prospect of war in Europe. Well listen up, because Buzzard Buzzard Buzzard’s debut album is a rejuvenating homage to unpretentious 1970s classic rock that steadfastly refuses to take itself too seriously.
The Cardiff four-piece, consisting of frontman and guitarist Tom Rees, his bassist brother Eddie, fellow guitarist Zac White and drummer Ethan Hurst, have been the subject of heady excitement since their debut EP The Non-Stop landed in July 2020.

We caught up with SG-toting Tom that summer and he confessed his obsession with Norman Greenbaum’s Spirit In The Sky. Since then, the band have doubled down on a shared love of 70s staples such as T.Rex, Queen and Steely Dan, bringing joy to the nation with a series of earworm riffs, relatable lyrics and choruses that burrow their way relentlessly into the centre of your brain and set up camp.

“You really can create a difference and a change with something as fickle as rock music,” contends Tom, and there’s little deviation from that defiantly optimistic approach on Backhand Deals, self-recorded in the band’s South Wales studio, where the band resolved to “just write fucking hits”.

From the album’s first words, “Like a poor old cow, has to graze all day/ just to stay alive, but ends up slaughtered anyway”, Tom Rees reveals himself as a smart observational writer, lamenting the harm caused by rampant capitalism and defending the right to protest. On You, elevated by muscular growling powerchords, he rails against corrupt political elites, leaving little to metaphor as sings “Cause there’s a clear distinction, Between Bishop and Eton, that lets me and my coked up buddies go all night”.

Occasionally, though, as on the breezy Good Day, the lyrical quality control is perhaps a little lax. The laboured rhyme “Feeling like Jay-Z but simultaneously lazy” isn’t one that will live long in the memory. 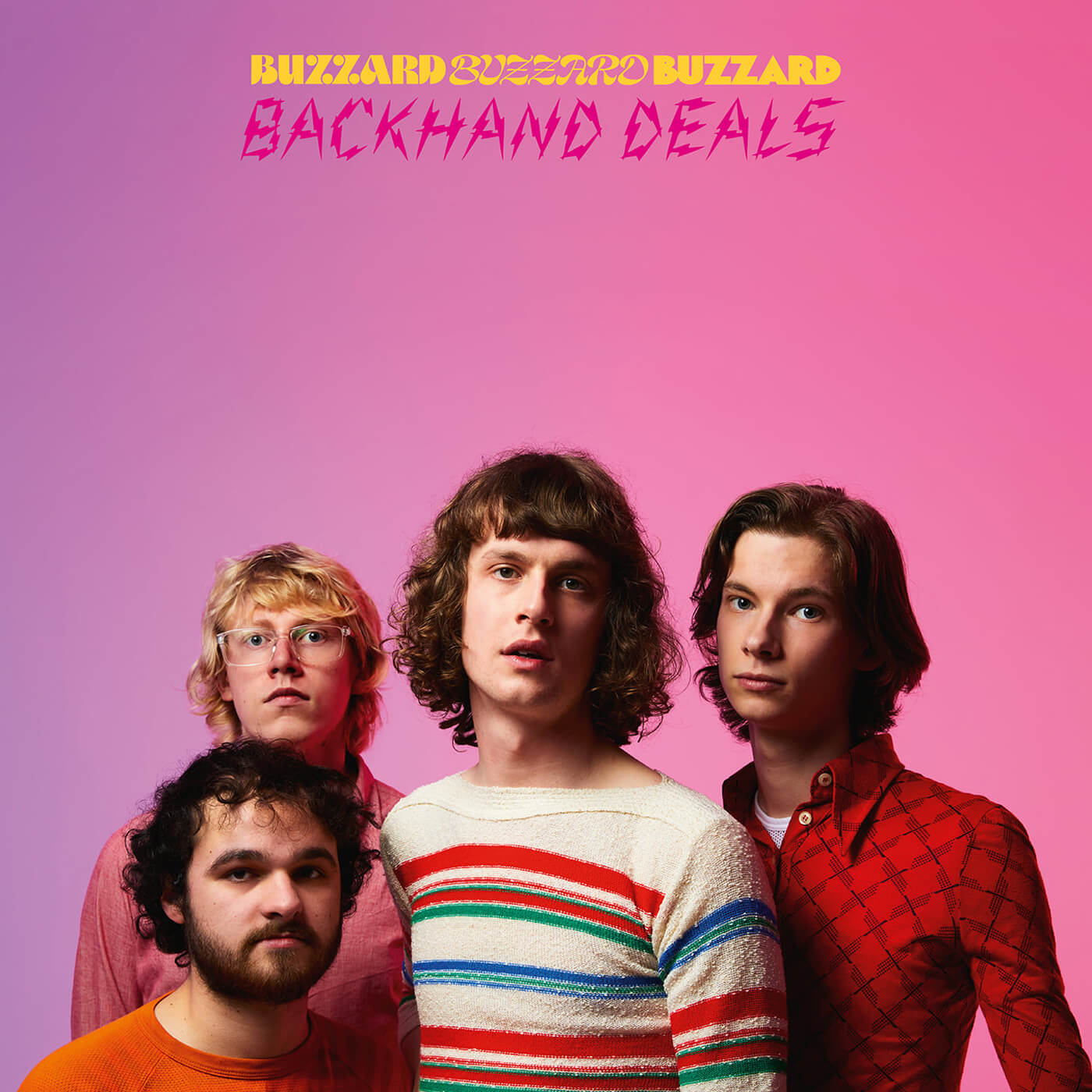 Crescent Man vs Demolition Dan takes aim at the incessant gentrification of our cities, before dissolving into a gently psychedelic mid-section then rising up to a grand, almost proggy, coda centred around some stellar riffing.

While 70s classic- and glam-rock glitter runs through the centre of Backhand Deals like a stick of rock, there are nods to the mid-90s, too. Faking A Living sees Rees critiquing Tony Blair’s infamous 1997 “education, education, education” speech, and the song’s sugary Britpop overtones tie it to the same period.

The only real pause from the power-pop onslaught comes on the album’s piano-led longest track, Yourself, Rees adopting a more reflective tone and doing his best Freddie Mercury impression. Lovelorn and lying awake as he paints the evocatively sorrowful image of a “happiness death camp that’s inside me”, the Buzzards rise around their frontman and a stirring sax solo runs away with the final minute.

Further Queen comparisons arise on the enjoyably glam Break Right In. After a sparse acoustic intro in which Rees observes, “Naturally you’d be surprised, at the wealth of living supplies you can find, at your nearest hardware store, or IKEA shop floor”, the vivacious organ chords and gleeful drum fills are suggestive of John Deacon’s You’re My Best Friend from A Night At The Opera.

In the chorus of that song, Rees hammers home the album’s defining mantra of not taking yourself too seriously as he implores “So get it up, and dance along/ and be the freak, that don’t belong”. When a joyous twin-guitar solo and brilliantly daft “break right in” BVs pile in, you can almost visualise the Cardiff quartet in their flares rocking a 1976 edition of Top Of The Pops.

The homage to Freddie briefly threatens to tip over into pastiche on the equally bouncy Feel The Change!, while On The Kill Again yields the album’s most exhilarating solo, executed with aplomb after the two guitarists have exchanged chugging powerchords, some nimble riffage and lusty yowls of feedback.

Buzzard Buzzard Buzzard’s debut album wraps up with A Passionate Life, complete with a “la-la-la” singalong and Rees’ concluding promise that “Swear I’m gonna try/ try as I might/ time after time/ to live a passionate life”.

Hats off to him and his band. It’s nigh-on impossible to resist their irrepressible sunny nature on a record which is, in essence, an affectionate love letter to the music of another era. At times, it wobbles along the line between inspiration and parody, but the incisive social commentary present in Tom Rees’ writing, the infectious melodicism and some inspired guitar playing save the day.