St Vincent – Daddy’s Home review: Her most organic and carefree guitar album yet

Annie Clark puts the guitar theatrics to one side and immerses herself in the warm, lo-fi sounds of her latest creative left-turn. 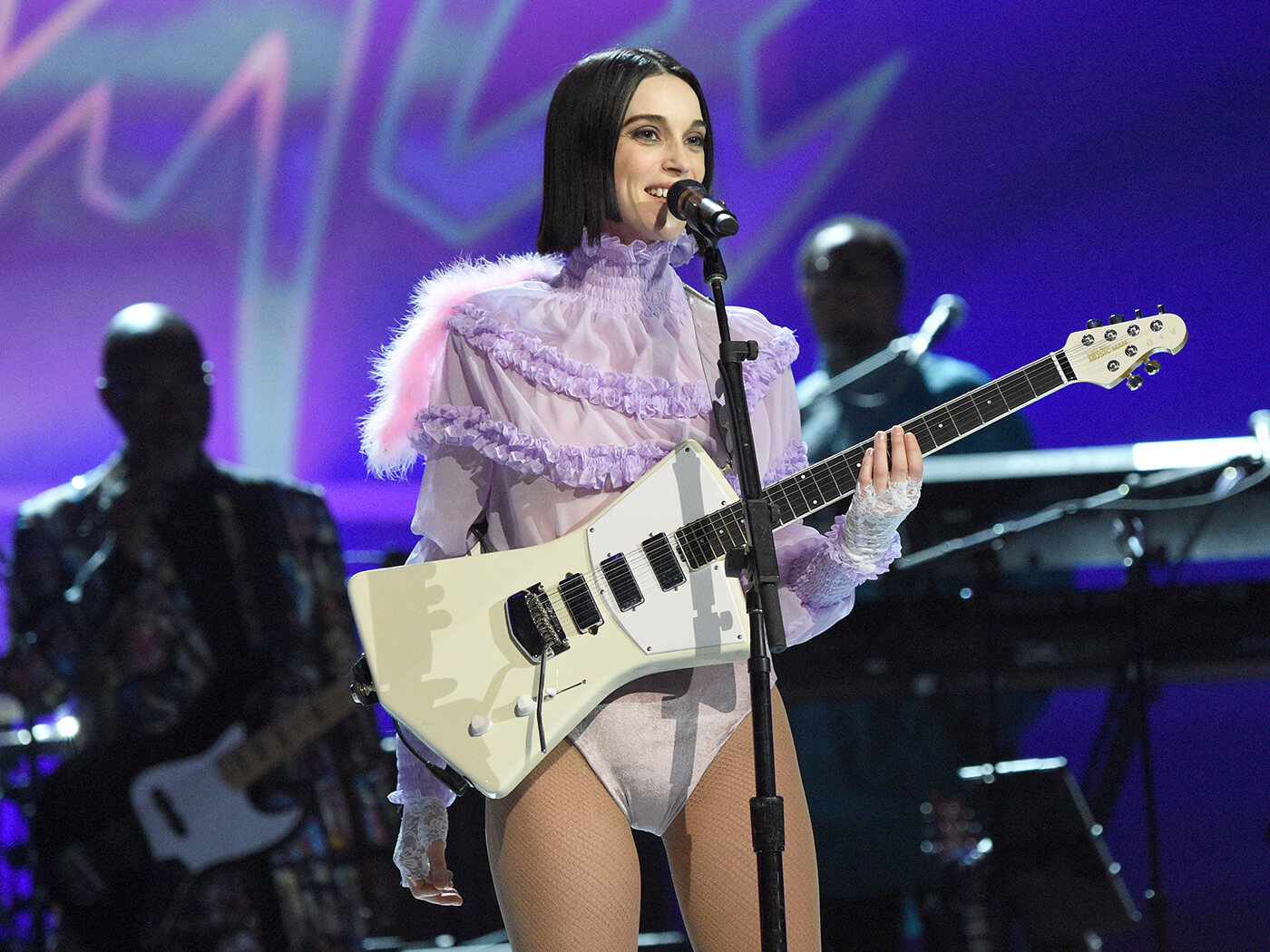 It’s not a record for ostentatious guitar moments, but the brooding 70s mood of Daddy’s Home gives Clark the space to create her most organic and carefree guitar album yet.

“You’re honouring the past, taking the knowledge that various people have cultivated and passed forward but also going ‘cool, we’ll take that, but let’s do something else, let’s find out what’s in the future’.” That was Annie Clark talking about her Music Man St Vincent signature model back in 2018, but she could just as well have been describing Daddy’s Home, the sixth instalment in a restlessly inventive and eclectic discography.

Clark began writing these songs in the winter of 2019, following her father’s release from a decade in prison for fraud, and the album is her attempt to wrestle the narrative around that back from the tabloids.

That’s not to say that Daddy’s Home is a straightforward one-subject record – the album takes us on a tour through the lives of a varied cast of downtrodden characters, with a warmth and compassion that has not always been present in Clark’s barbed observations.

“I think I wanted to write a record about people doing the best they could to get by,” she told Guitar.com about the album’s subject matter. “And I could write the record because I’ve been almost every one of the characters in it – I’ve been the girl on the morning train looking worse for wear in last night’s clothes, y’know? I’ve been the girl at the holiday party… I’ve been around the block, and across the street as they say. So I could write about it. Also, I don’t feel particularly interested in condemning anybody or anything, it’s more like life is complicated, and people are complicated. And I could study humanity and write about humanity and all of its facets and it’s contradictions for the rest of my life and never get bored.”

What is most striking about Daddy’s Home, however, is the huge stylistic shift from the fuzz-drenched future-pop of her last record Masseduction. We’ve become accustomed to Clark taking musical left turns with each album, but this might be her most unexpected yet. Loose, funky, psychedelic and signposted by a sepia-toned cover, it’s a discerning trawl through Clark senior’s record collection, the sounds of Steely Dan, David Bowie and Stevie Wonder accompanying snapshots of New York City in the first half of the 1970s. Clark wanted the 14 songs to feel like “Last night’s heels on the morning train. Glamour that’s been up for three days straight”.

Lead single Pay Your Way In Pain is a jolting electro-funk embodiment of the sleezy glitz she had in mind. Swaggering in from a rag time piano intro offset with ecstatic carnal gasps, it nods heavily to Bowie’s Fame, with an infectious synth groove more revealing of Clark’s enduring love of Prince. Her voice is thick with mischievous intent and dislocated alienation as she sings “So I went to the park just to watch the little children, The mothers saw my heels and they said I wasn’t welcome.”

It’s a devilish opener, but things are never quite as extreme on Daddy’s Home, with the rest of the record settling into a more relaxed, contemplative groove – and Clark’s guitar eschews the angular, rigid precision we’ve come to expect for a languid, loose style that feels entirely new ground. “The guitar playing and the style on Masseduction was a lot of right angles, and this record has way more wiggly lines,” she tells us.

That’s not to say that she’s thrown everything out and started from scratch – she still enjoys altered tunings, the occasional wild unorthodox riff and judicious use of the vibrato arm on her new Music Man model, Goldie – a guitar created for the record, complete with vintage-vibed gold foil pickups. But what Daddy’s Home has almost none of is distortion – Clark’s signature angular fuzz giving way to lush clean tones, often ornamented by lashings of wah – a pedal she’d never even owned before making this record. In the place of distortion, Clark turns to an unlikely source to add dissonance to her riffs – a 1967 Coral electric sitar that was a gift from the album’s producer Jack Antonoff (Lana Del Rey, Lorde, Taylor Swift). 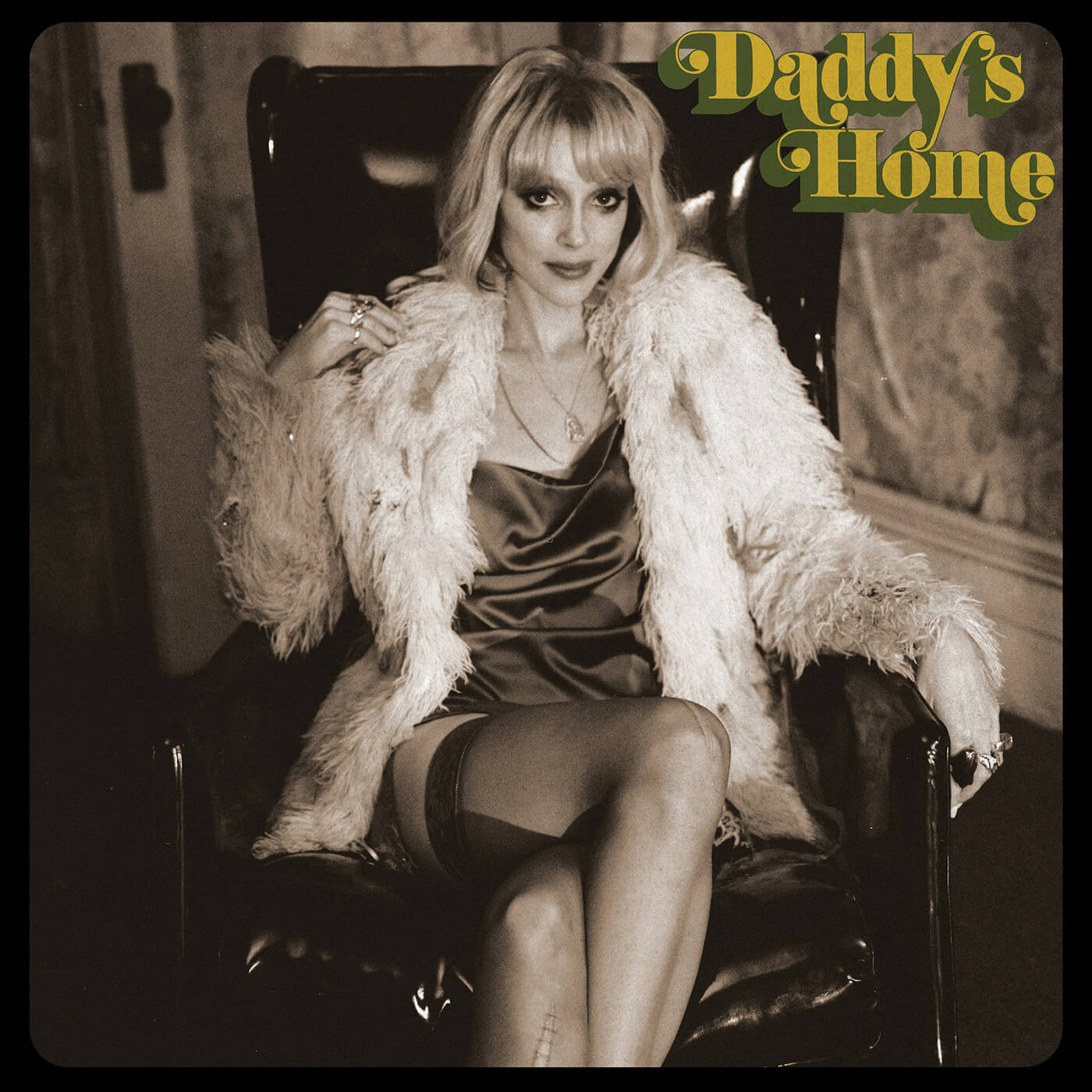 The sitar is first audible on Down And Out Downtown, an easy soulful shuffle ornamented by the instrument’s exotic swirl, slide guitar, sparkling acoustic chords and luxurious backing vocals, the somniferous air suggesting Gil Scott-Heron and Sly And The Family Stone.

We see Clark signing autographs in the prison’s visitation room on the steady-rolling title track against a period-correct backdrop of parping sax, Antonoff’s wobbly organ stabs, funky chopping wah and extravagant vocal screeches. It’s not clear whether the singer is referring to her father or herself as she ponders “Where can you run when the outlaw’s inside you?”

A more surprising but no less 70s reference point shrouds the meditative Live In The Dream, a barely veiled revisit of Pink Floyd’s Us And Them. Clark conjures a fine approximation of David Gilmour’s Uni-Vibe sound and her hushed cooing vocal is deeply lulling as she implores “you look tired, go on rest your head”. The Music Man is granted a moment in the spotlight as Eastern-tinged atmospherics and twinkling synth textures drop away to make space for first an abridged wonky guitar break and then as the song swells a second rip-roaring solo peppered with plunging slide runs.

Ever wry, Clark disarms the moment of Floyd reverence with a quick-witted callback, namechecking The Dark Side Of The Moon on the following The Melting Of The Sun, which has slight shades of Bowie’s Soul Love in its chorus-wet vocal tones. It’s a platform for Clark to pay her dues to female musical icons who inspired her such as Nina Simone and Joni Mitchell before rising to a dizzying choral outro that cuts to silence abruptly.

The tone is convivial throughout much of the second half of Daddy’s Home, Clark picking up an acoustic on the Beatlesy fingerpicked Somebody Like Me, the comely major/minor shifts, lap steel and orchestral flourishes sweetly appealing as she draws out the line “doesn’t make you a genius, or the fool of the week to believe enough in somebody like me”.

My Baby Wants A Baby is light-hued too, a funky 70s throb that rises to a grandiose peak with Antonoff playing Wurlitzer organ alongside a tapestry of wah, horns, gospel harmonies and sitar as Clark acknowledges her fears and weighs up a more traditional family existence: “My baby wants a baby, how can it be wrong? But I wanna play guitar all day, make all my meals in microwaves.”

There’s even an excursion to Laurel Canyon on …At The Holiday Party, the first track recorded at sessions that spanned New York’s Electric Lady and Clark’s studio in LA, percussive strummed acoustics, summery bongo rhythms and grand brass combining as she asserts “you can’t hide from me”. It feels like both a substantial departure and entirely natural in the hands of an artist who wears many masks with equal aplomb. It might be an album that looks back in a way that we’d never expected a St Vincent album to do, but throughout all of its emulation of another era, Daddy’s Home wins out because of Annie Clark’s peerless ability to surprise, adapt and continually defy categorisation.