Bea Kristi’s star has been rising since her fragile bedroom acoustic confessionals set the internet aflame, but her debut album pulls together myriad 90s college rock touchstones to propel her into the stratosphere.

“I get all these messages from girls that look like me when I was 15, and they’re like, ‘I picked up a guitar because of you!’” says 20-year-old Philippines-born British songwriter Bea Kristi, otherwise known as Beabadoobee. It’s safe to say her grunge-pop debut album, Fake It Flowers, is going to inspire thousands more girls (and boys) to pick up the instrument. It’s an exceptional record.

There had been ample signs Beabadoobee was going to be massive. Understated acoustic single Coffee (the first song she wrote) was a viral success in 2017, and got a second lease of life when it was sampled by Canadian artist Powfu on his song Death Bed last year (racking up 4.1 billion views in a month on Tiktok). But by that point Bea was well on her way to finding her own sound under the guidance of uber-hip indie kingmakers Dirty Hit (home of The 1975, Wolf Alice and Pale Waves) and that sound would be rooted firmly in the breezy teen movie-soundtrack-ready vibe of 90s American college rock.

Having taught herself to play guitar while listening to Sixpence None The Richer’s breezy 90s hit Kiss Me and taking inspiration from Daniel Johnston, Elliott Smith and Sonic Youth, we first got a glimpse of this radical and interesting genre shift with 2019 EP Space Cadet. Standout track I Wish I Was Stephen Malkmus showed she was happy to place her influences front and centre, but the overall sound was more expansive and confident, crashing in a visceral wave of overdriven offset Fender guitars and cathartic lyricism, or what Kristi describes as “bubblegum grunge”. The EP would allow Kristi to experience being in a band for the first time, touring the world, and picking up an NME Radar award along the way.

It was clearly a transformative experience for the 20-year-old, and one that led her back to her childhood bedroom to record the album that would set out her stall as an artist – one that takes the infectious grungey pop that hooked the world in with less breezy lyrical subject matter to offer an altogether deeper experience.

Fake It Flowers’ lead single and album opener Care certainly doesn’t hang about, crashing into its first heart-on-sleeve chorus and soaring guitar hook within 30 seconds. It’s a song, Kristi says, about “being angry at society, or people around me who I just don’t think know me and don’t care”.

There are parallels with Soccer Mommy, with whom she collaborated earlier this year, and the themes of teenage trauma and discord continue to dominate across 12 melodically pin-sharp tracks. Worth It’s explosive choruses and brief, serrated solo are joyous, while Dye It Red is an anthem to self identity and growth, aiming a series of retorts at a former lover who’s “not even that cute”. The lead playing is exhilarating and devastatingly concise. The insistent, rhythmic acoustic foundation of Charlie Brown’s verses opens out into a huge emo chorus, in which Kristi tackles the uncomfortable subject of self harm, concluding fatalistically in the bridge, “If I could die here a million times, then what’s the point in trying?”. 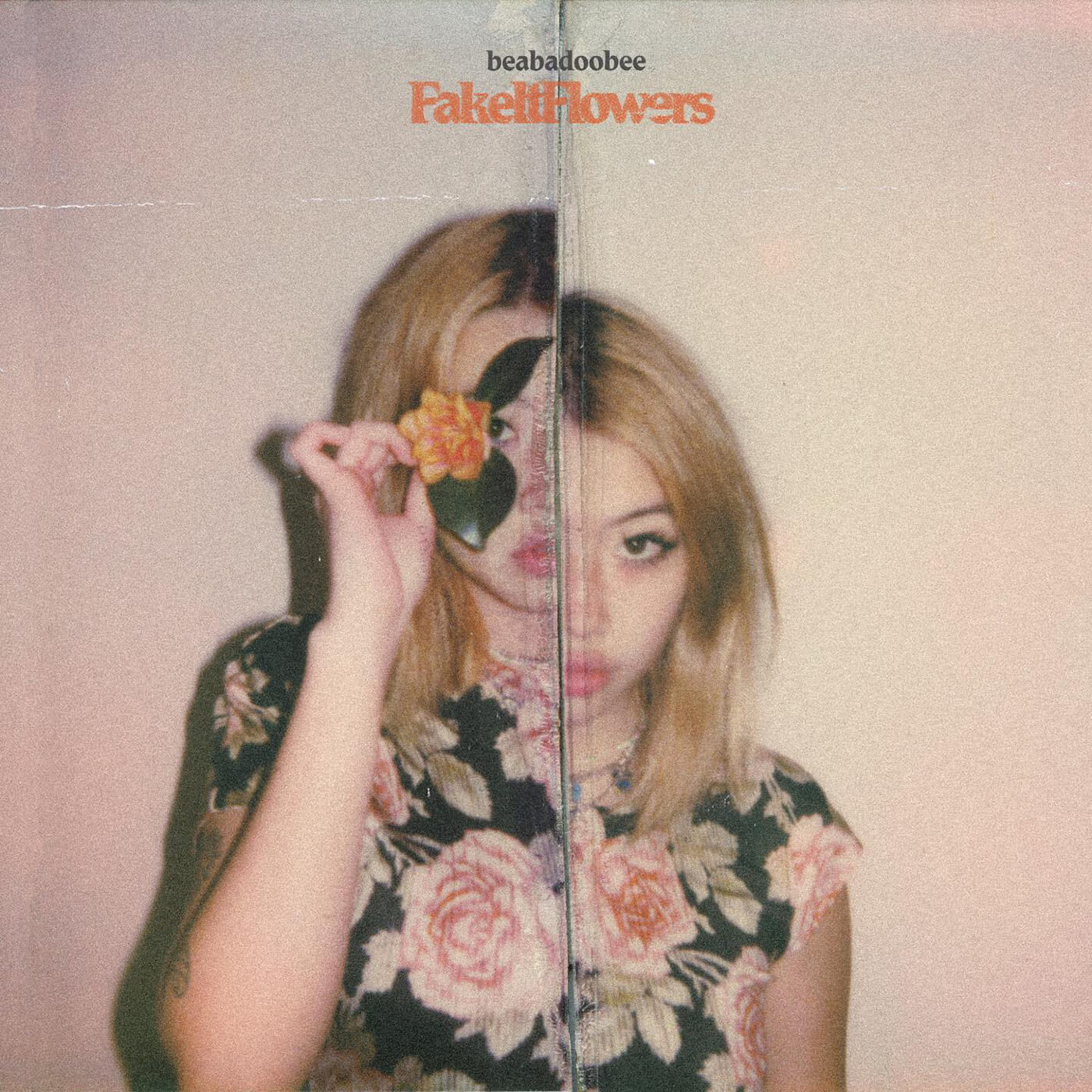 It’s not all three-minute angst-ridden bedroom pop, though, and Fake It Flowers should have an appeal beyond the teenage demographic it speaks to. The second half of the album sees the scope of the arrangements become more ambitious, with strings shading around the bittersweet imagery and two songs stretching out past the four-minute mark.

Swirling delay textures and a sparingly used military snare beat illuminate Emo Song, its writer lamenting her disappointment in dishonest men: “You call me up and lie again, like all the men I used to trust”. Sorry is an emphatic realisation of the 90s loud/quiet dynamic so influential on Kristi, strings adding gravity to its confessional verses before ferocious bursts of heavily distorted guitar drive home the message.

Further Away is better still, a stirring orchestral arrangement weaving through a patiently strummed verse that’s accented by decorative electric flourishes. Kristi sounds despondent: “Say what you want, it’s hard ‘cos it sucks, I’ll just pretend to give a fuck”, yet still brilliantly fork-tongued: “They say the moon’s miles away, but your brain’s further away”, some glorious aching open chords and a rising spiral of strings offsetting the withering burn perfectly.

While these expressions of vulnerability are endlessly earnest, Fake It Flowers is enabled, encouraged even, to be imperfect, levity allowed to permeate. It’s part of what makes it such a superb debut record. Yoshimi Forest Magdalene was recorded in a single take, mistakes left audible, How Was Your Day was captured on a four-track in her boyfriend’s garden during lockdown, dog bark and all. The latter’s simplistic honesty, boxy acoustic guitar just about in tune, is a charming juxtaposition to the emotive melodrama that precedes it. “Remember when we used to smile,” Kristi sighs, suddenly sounding old beyond her years, yet remaining entirely relatable.

There are signs, too, of a writer of considerable poise sharpening her craft, not least in Horen Sarrison, a spoonerism on the name of filmmaker and her aforementioned beau Soren Harrison, when she sings: “You are the smell of pavement after the rain, you are the last empty seat on a train”.

This may be a record in thrall to the 90s, Kristi has even said in interviews that she feels she was born in the wrong decade, but Fake It Flowers has its own distinct identity. It’s angry, smart and affecting in all the right places and makes you remember why you picked up a guitar in the first place.