It is, in fairness, a rather niche construct. A live album and concert film devoted to a rock opera concept album about the misfortunes of a fictional family in small-town America, released 17 years after the event. But then Neil Young is famously disinterested in pandering to public opinion.

Return To Greendale captures Shakey and Crazy Horse on the 2003 tour to support Young’s 25th studio album, Greendale, a 78-minute piece he billed as a “musical novel”, and which has already spawned a graphic novel and its own website. Neil Young seems determined to keep returning to the mythical Californian town where, through the vehicle of the Green family, he digs into his core themes of environmentalism, the ills of the Bush administration, anti-war sentiments and the insatiable greed of capitalism. The story’s narrative arc covers the accidental shooting of a police offer by young Jed Green, Grandpa Green suffering a heart attack and dying while trying to fend off news reporters, and his granddaughter Sun becoming an eco warrior. Like much of Young’s prolific latter-period output, where quality control has been a recurring issue, the original album divided critical opinion.

This 2020 release is accompanied by a DVD featuring the entire concert, with actors weaving in and out of Young and the band theatrically as the story develops. In truth, the whole thing probably makes most sense with that added visual context, but that’s not to say there aren’t some great songs on Greendale, and as live albums go, it’s a great-sounding record. Enough of the live atmosphere has been allowed to remain, and the serrated growl of Young’s Les Paul Goldtop sounds delectable throughout.

The idealistic Falling From Above is absolutely lovely, its misty-eyed verses interspersed with blasts of wailing harmonica. Young coos in its sweetly stodgy chorus: “A little love and affection, in everything you do/ will make the world a better place/ with or without you”.
For the remainder of a lengthy set, Crazy Horse lock into a steady, lo-fi blues groove, the chord progressions rudimentary. Moments that pin you back in your chair are thin on the ground, incendiary choruses and wanton soloing surprisingly rare. 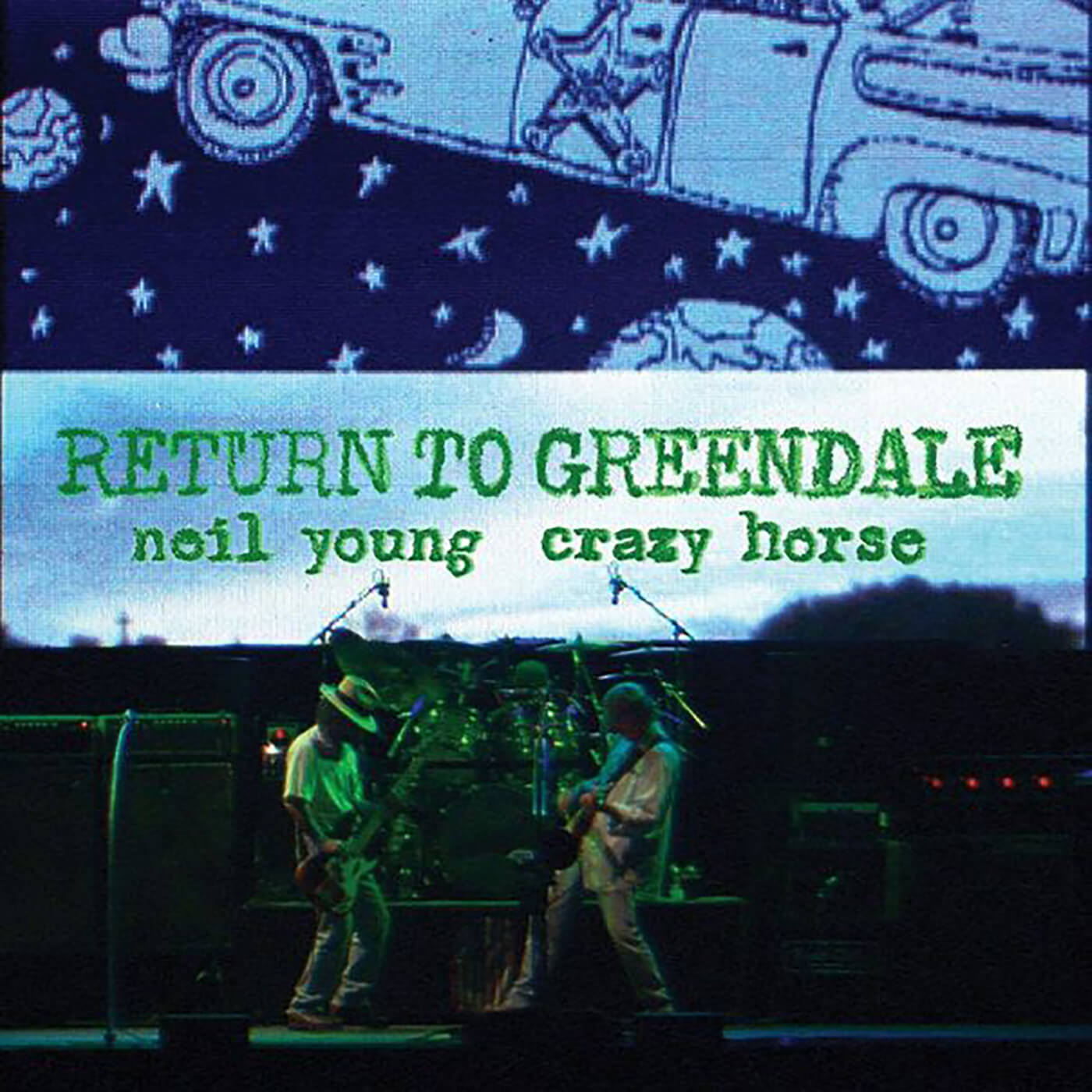 Young’s slow melodic phrasing on the shuffling blues of Double E draws an appreciative roar from the Toronto crowd, but it’s kept short, a chorus of backing singers throwing a halo around the lead vocal. Things turn darker on the swampy Leave The Driving, as Jed accidentally pulls the trigger on a cop, Shakey’s Gibson snarling throatily before being driven through a series of brief duels with a harmonica, the crowd delighting in his nod to “people who’ve taken pure bullshit and turned it into gold”. Carmichael, built on a ponderous two-chord pattern and deliberate, unreconstructed riffing, is heavily poignant. As the cop’s death comes to light, Young reports, “Carmichael was a credit to the force, and everything he did/ it’s like we’ve got a big hole in our side, where he fit”.

Even more touching is Bringin’ Down Dinner, as grandpa’s daughter hears of his death when she sees him on the news. That sorry tale is recounted in Grandpa’s Interview, unfolding across 12 minutes, the central riff picked out with a hefty attack and goodly amounts of fuzz, supported by the chiming accent of an organ. Young’s sparing glissando lead cuts to the core and grandpa defiantly shuns the slavering media, telling a reporter to stick her questions “where the sun don’t shine”, affording Young a side swipe at modern TV and journalism.

The most arresting song in the set sees a downtuned acoustic makes an appearance on the wistful Bandit, Young emoting in his plaintive falsetto “some day you’ll find everything you’re looking for” and referencing Bob Dylan as the biggest cheers of the evening pierce the sudden quietude.

Penultimate track Sun Green is lit up by roaring unison bends and strident closer Be The Rain is hugely anthemic, a steady 4/4 beat and a bank of vocals imploring us to “Save the planet for another day/ don’t care what the government say”, with Young bellowing worthy evocations into a bullhorn. It may be Sun Green preaching, “We’ve got a job to do/ we’ve got to save mother Earth”, but she’s clearly channeling Shakey’s own campaigning voice. It’s a smart conceit that you may find over-earnest depending on your personal cynicism levels.

Even by Neil Young’s lofty contrarian standards, Greendale is a substantial indulgence, but penetrate beyond the unusual concept and the sedate pace of some sprawling track lengths, and at the heart of this well-recorded live set are some fine songs. The characters are drawn adeptly, the sorrow of the family’s misfortune deeply affecting and the ecological message never far from the surface. At 80 minutes, it may test the patience of all bar the most loyal fans, but Neil Young has always rewarded the patient.