Months after leaving school, Ash emerged from the narcotic debauchery of sessions at Rockfield Studios with a classic power-pop debut teeming with naive teenage romanticism and soaring guitar moments. Can you believe it’s already 25 years old?

All our dreams coming true

It begins with the howl of a TIE fighter from Star Wars hurtling through space and ends with the sound of bassist Mark Hamilton being violently sick. In between those two odd bookends, Ash’s full-length debut is a sparkling 50-minute expression of all the wide-eyed hope, romance and boozy naivety of teenage life, 12 slices of unpretentious guitar-pop smashed out by a trio who’d just finished their A-Levels.

There were better, more complete and certainly more sophisticated records made in the mid-90s, but few if any of the albums that arose from the height of the frequently daft Britpop boom evoke a more complete sense of misty-eyed nostalgia for the era than 1977. It feels scarcely believable that it’s already a quarter of a century old.

Ash formed in 1989 at school in Downpatrick, Northern Ireland, initially as Iron Maiden covers band Vietnam. Singer and guitarist Tim Wheeler, drummer Rick McMurray and Hamilton followed the breathless grunge-pop promise of 1994 mini-album Trailer by heading into the studio with Oasis producer Owen Morris early in 1995. They emerged with Kung Fu, written in five minutes at Belfast Airport on the way to the sessions, Girl From Mars, penned by Wheeler at the age of 16, and Angel Interceptor. The latter was recorded using The Verve’s equipment, including a drumkit once belonging to John Bonham, with Morris still in the middle of producing A Northern Soul.

Suitably impressed by three storming singles lit up by Wheeler’s swashbuckling lead playing, the band’s label, Infectious Records, packed Ash off to Rockfield Studios in South Wales to record the rest of what would become 1977. Kicking off on New Year’s Day 1996, there was one slight problem. The band arrived without nearly enough material and were forced to write the remaining songs in the studio, where Morris was “gradually introducing us to drugs,” recalls Wheeler.

“I wasn’t really ready for it, although it was all I’d ever wanted,” the singer and guitarist told this writer years later. “It was a mad time, those whole couple of years. We meant to finish it in six weeks, but it ended up taking us about two and a half months.”

With the clock ticking and pressure from the label building, work continued as the band enjoyed snowball fights with the Boo Radleys, who were recording C’Mon Kids next door. Morris, meanwhile, was becoming increasingly hedonistic, taking acid, “throwing fire extinguishers through the studio glass and dancing on top of this £500,000 console,” according to Wheeler. On one particularly extra-curricular day, the producer sent the easily-led teenagers to a provincial village charity shop to buy women’s dresses to record in.

“Technically it was our first job out of school, but it didn’t feel like a job at all,” Wheeler told Vice. “It felt more like all of our dreams coming true at once.” 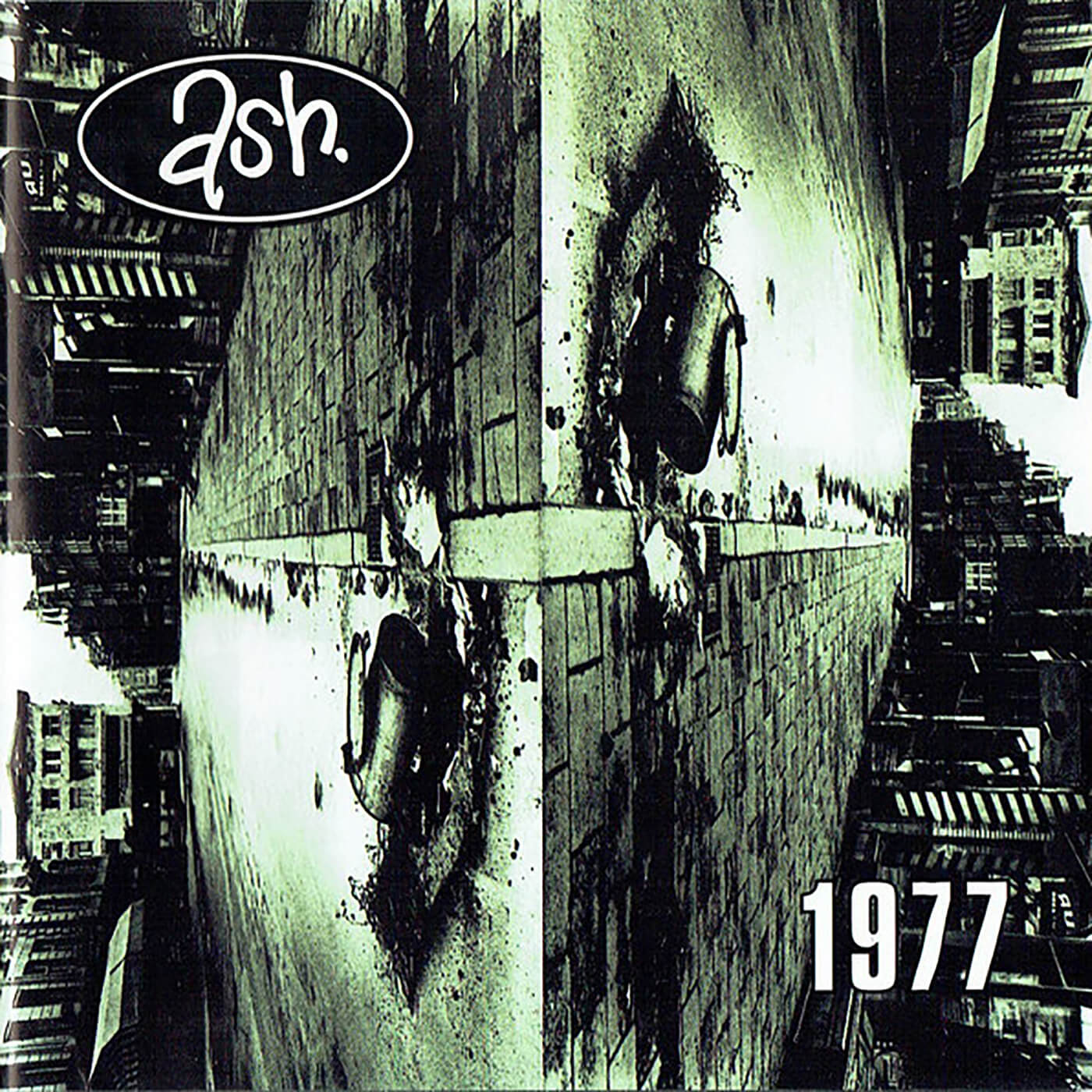 A punch in the face

While the three slightly gawky looking teenagers were becoming unlikely Britpop poster boys, they didn’t subscribe to the prevailing atmosphere of Beatles, Stones and Kinks reverence. Named partly in reference to punk’s landmark year (thankfully drunken working titles Look Girls, Cut The Shit And Suck My Dick and Women & Tits were quickly rejected), 1977 betrays Ash’s love of bands such as Buzzcocks, Ramones and The Undertones. It’s hard, too, to listen to the album without hearing the influence of Dinosaur Jr’s 1988 cult classic Bug and the romantic melodicism of Teenage Fanclub’s Bandwagonesque.

While he would go on to indulge his dual-guitar Thin Lizzy fantasies when Charlotte Hatherley joined the band in 1997 (check out their cover of Weezer’s Only In Dreams for the high point of that partnership), the playing on 1977 is all Wheeler’s. First picking up the instrument at 12, he left behind initial metal tendencies when he was seduced by the quiet-loud dynamics of Nirvana, Pixies and Sonic Youth. Ash’s frontman is a self-confessed Les Paul addict, with a 1960s Les Paul Custom Black Beauty his main studio guitar these days, and his favourite live instrument an early-80s Korina Flying V, but 1977 was surprisingly recorded using a 1995 Grestch Silver Jet bought on the band’s first US tour.

Wheeler doesn’t waste a second once the TIE has disappeared into the distance on opening “punch in the face” Lose Control before unleashing the Jet. He launches into a breakneck tremolo-picked ascending octave riff and returns for a frantic solo soaked in wah and dominated by huge string bends. There’s barely a pause for breath before arguably the best song the band have written – Goldfinger. It’s a universal story of teenage romance, the bittersweet grungey chorus built around the simplest of chord structures (B♭/G♯/B/F♯/B). Wheeler delivers another corking solo, overtaken by the soaring jet engine sound of a dimed phaser, as the rain lashes down outside and he waits for his love to arrive. We never find out whether she does.

The momentum is maintained as indie-disco favourite Girl From Mars crashes in, the first 10 bars strummed sweetly on an acoustic before being swallowed up by electric chords saturated with fizzing distortion. Wheeler again milks the wah throughout a rapidly spiralling guitar break that’s wantonly excessive in all the best ways.

From there, the speed with which the band’s chief songwriter filled out 1977’s tracklisting threatens to derail a dream debut that would in all honesty benefit from being 10 minutes shorter. Morris, fresh from helming Oasis’ (What’s The Story) Morning Glory?, deploys a strings section in an attempt to lend gravitas to the wobbly Gone The Dream, and Innocent Smile trails off into an elongated jam session, but only the most churlish critic could fail to raise a smile during 1977’s exuberant high points.

The carefree Jackie Chan-saluting 137-second powerchord romp Kung-Fu is riotous uncomplicated fun; Oh Yeah, an ode to summer romance with another glorious, lyrical Wheeler solo, is elevated by orchestral flourishes; and the lovely Weezer-esque Angel Interceptor is all dreamy “ooh-ahh” backing vocals, chiming harmonics and a dizzying cascade of trills that just about takes the prize as the album’s guitar highlight.

It’s probably not worth your while, though, hanging around for the five-minute secret track Sick Party, an aural snapshot of the debased scenes inside Rockfield as Hamilton and guitar tech Leif Bodnarchuk are noisily and horribly sick. But, hey, it’s all part of the coming-of-age fun.

On the eve of the heady, hopeful great British summer of 1996, Ash’s debut album crashed into the charts at No 1, knocking Alanis Morissette’s vastly more earnest Jagged Little Pill off the top spot and selling over 300,000 copies in the UK. Drowned In Sound’s Joss Albert quipped that 1977 was “an album by the young for the young”. MTV’s Michael Krugman noted that Ash were “teetering on the brink of maturity – only they’re plainly fighting it by throwing their weight in the other direction,” while AllMusic’s entry on the album enthuses: “It’s a melting pot of pop styles, basically because the members of the band are so young, they haven’t conformed to the standards of the indie and punk subcultures.”

By the time 1998 follow-up Nu-Clear Sounds arrived, Ash had employed a newly beefed-up, darker guitar sound with the introduction of Hatherley, but much of the innocent joy of their debut had been sacrificed. Free All Angels restored some of the melodic charm three years later, and a further four albums have since followed, but Ash are a band that were never supposed to get old and the wild, naive and unaffected spirit of 1977 remains their finest hour.

“It’s quite a nostalgic album,” Wheeler reflected on the record’s 20th anniversary. “I knew my life would never be the same, so there was that touch of nostalgia to it.” That sums up Ash’s full-length debut perfectly. Beyond the narcotic Rockfield all-nighters, thrumming powerchord riffs and exhilarating solos lies a wistful, yearning desire never to grow up. How on earth can it already be 25 years ago?

Kanye West’s label hits back at “underpaying” allegations, says it’s paying more for King Crimson sample than it has to