The Genius Of… Boston by Boston

The 1976 mega-LP wasn’t just a landmark in home recording, it also saw Tom Scholz build a custom guitar sound all on his own. And then lie to his own record company.

Tom Scholz is hardly your typical rock auteur. At a gangly 6ʹ6ʺ, he certainly didn’t look the part. When Boston was released in 1976 he was already 29 years old and, having gained a Master’s degree from MIT in engineering, he’d been working as a design engineer for the then-huge Polaroid Corporation. Still, he had his hobby writing and recording in his basement. He’d even work through the night. “There were days I didn’t make it into Polaroid in time… Most days actually. I was a horrible employee.”

But Scholz was responsible, in his leisure time, for crafting a landmark debut album in his basement. Boston by Boston was/is an utter phenomenon: it rocketed a ‘band’ that barely existed to arena headliners within six months, and soon became the biggest-selling US debut album ever… a title it held until Guns N’Roses’ Appetite For Destruction arrived 11 years later.

It was not as if Scholz was even a studious observer of the rock market. He said he’d stopped listening to ‘new’ rock around 1972 and reckoned he had just five LPs he regularly listened to or sought inspiration from: Jeff Beck’s Truth (with Rod Stewart on vocals), the first brace of Led Zeppelin albums, The James Gang’s Rides Again and the 1968 debut by proto-metal psychedelicists Iron Butterfly. Other than these, he listened to classical music: “Good vinyl symphonic recordings from the 50s are awesome.” More unlikeliness? Scholz only started playing guitar at all when he was 20 (his elder brother had a Fender Strat that Tom wasn’t allowed to touch until that age) but he was classically trained as a pianist.

In his own words, “I was basically a dork that hit the books and liked to build things and did all of the things that you weren’t supposed to do to be popular. But somehow I ended up onstage, playing guitar in front of everybody else.”

Boston were also atypical as they weren’t even a band. Scholz’s basement recordings were undertaken with drummer Jim Masdea: at the time, both viewed themselves pretty much as ‘hobbyists’ but with a dream of a rock band “with crystal clear vocals and bone-crunching guitars”.

They weren’t totally averse to live appearances: it was when Scholz was playing keyboards for local band Mother’s Milk that they discovered singer/lyricist Brad Delp, who had the elastic rock voice of their vision, but the Boston project was primarily a studio one. Scholz later argued, “Trying to get my music performed live by bar bands was a self defeating experience. It really just distracted me from what I should’ve been doing all along, writing and recording.”

In the live hotbed of the early 70s, this was out of the norm. Proto disco acts may have worked this way, and Scholz was quick finding out that Boston’s music didn’t fit in there anyway. He’d sent out dozens of demo tapes over the years of tunes recorded in his basement with Masdea and Delp, only to receive a string of resounding “No”s. But interest was starting to grow by 1976. A&M Records. Columbia, and Phonogram were all interested, but it was CBS/Epic Records – also home of Scholz’s hero Jeff Beck – who were keenest. A deal – notably with songwriters Scholz and Delp only – was struck. But Epic had two regular provisos. ‘Boston’ had to perform a showcase for label execs. And, all being well, they would re-record the tracks in a ‘proper’ professional studio. 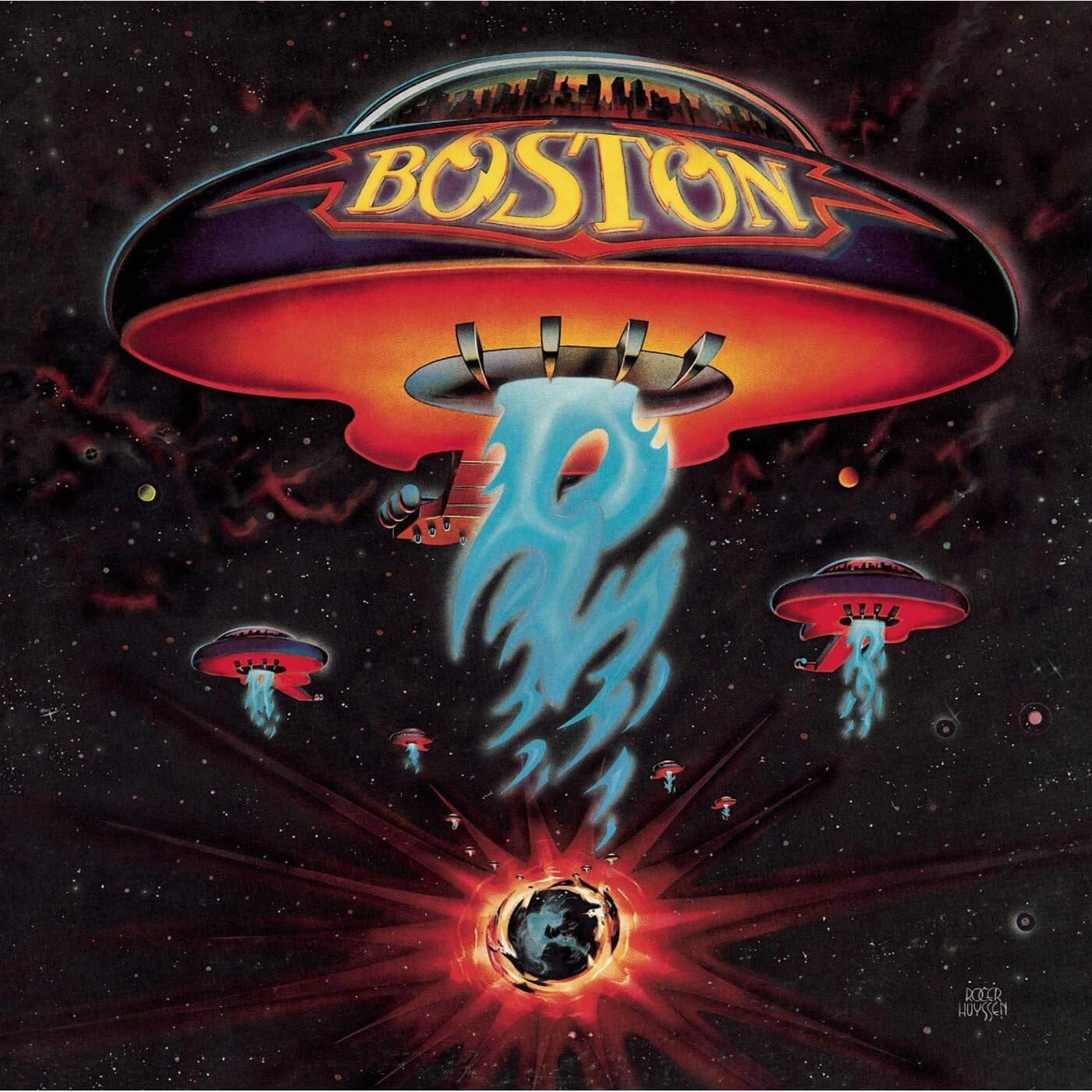 The thing is, Tom Scholz fervently disagreed. Some of his demos had been years in the making, perfected in his basement. Anyway, there was not “a band”. The demos (apart from the drums) were just all Scholz (and Masdea’s drums) with vocals added by Delp. Even Delp, Scholz claimed, didn’t realise this for 10 years… the singer just assumed there’d been a string of other guitarists, bassists and keyboardists at work on the epic-sounding demos. Then again, Delp himself only co-wrote two of the tracks: Smokin’ and Let Me Take You Home Tonight. What he was singing to was simply six years of Tom Scholz’s time.

The other Boston members – drummer Sib Hashian replacing Jim Masdea, plus second guitarist Barry Goudreau and bassist Fran Sheehan – only joined properly for the Epic showcase. The newly formed band passed the audition, and signed a deal for 10 albums over the next six years… as if! And it was only then that Scholz decided on a perfunctory band name he didn’t much care for: Boston.

More pressingly, Scholz knew a pro studio could not match his own elaborate demos. Part of it was simply practicality. His demos had made use of his own custom gear: he had built his own attenuator he called the Power Soak (so he could drive his Marshall head at low volume), the infamous Hyperspace Pedal (only two exist), a crude prototype of a chorus unit mounted in a cigar box, and numerous EQ racks that helped achieve his unique analogue sound. In the 80s, he’d bundle some aspects together in the hugely popular Rockman-brand headphone amp (Distortion+Chorus+Echo-in-1) and EQ racks.

The first Boston album is surely the only debut ever that was basically an R&D project, and Scholz later claimed his biggest thrill as an engineer was when he received two warranty cards for Rockmans from… Jeff Beck.

For the album, Scholz found an ally in producer John Boylan. He eventually agreed with Scholz that the LP would be best completed in a basement where the tall Tom even had to bow his head to get from one room to the second, and, in return for a 50/50 co-producer credit, Boylan had the new makeshift ‘band’ doing sessions (for tour practice, as much as anything) at Capitol Studios in Los Angeles and fielding questions from CBS/Epic. Scholz, meanwhile, was back in Massachusetts finalising his demos and transferring them to a professional, 24-track format himself. When Scholz was done, the tapes were taken to Capitol Studios for Delp to sing on, and for the album to be mastered. Even that didn’t always work. Delp found the LA smog disagreeable, and actually went back to Scholz’s basement to finalise some vocals.

For even an established band to pull-off this way of working was a ‘maybe’: for a debut album it was unheard of. Still, who cares, as Epic were happy with the new ‘professional’ recordings… even if they were 90 per cent identical to what they’d already heard. Seems Scholz was right: record companies actually knew very little about what they were hearing.

More than a single… a whole new sound

More Than A Feeling (in edited form) was the big breakthrough hit from Boston, of course. But the whole LP snared the public  consciousness. You can hear, in many ways, its long genesis. More Than A Feeling itself dated back to ’73 or ’74, The keyboard Foreplay (prelude to the rocking Long Time) was the first tune Scholz ever wrote back at the cusp of the ’60s/’70s, and you can hear the influence of psychedelia at work, or that of Jon Lord with Deep Purple. Rock & Roll Band was a purely fictional yarn about the ‘band’s backstory. “Playin’ for a week in Rhode Island, A man came to the stage one night, He smoked a big cigar, drove a Cadillac car and said,

‘Boys, I think this band’s outtasight, Sign a record company contract!’ Pretty lame lyrics about a situation that had never even occurred, but it suited the expected narrative better than a dork in a basement.

More than all that, it was the sonics. Boston mixed ultra-lush multi-tracked guitars, zapping melodic solos you could sing and almost bubblegum pop vocal melodies. It wasn’t ‘heavy rock’, or ‘heavy metal’ as anyone knew it, it wasn’t a jam band thing… at just 38 minutes long Boston was as pop as prog/hard rock was going to be. It would be lofty to claim Boston alone started the 80s AOR trend, but it doesn’t take a genius to hear echoes in what Journey, Foreigner, Def Leppard, Whitesnake (1987 era) and others would later do.

And when Scholz launched his own Scholz Research & Development company in the 80s and its Rockman series of products, they were a hit. The Rockmans sometimes delivered a later iteration of ‘the Boston tone’, but Jeff Beck (People Get Ready), David Gilmour (About Face), Joe Satriani (Surfing With The Alien) and Def Leppard (Hysteria) all had it in their sound-chain. There’s still an underground fanbase for the originals, and Dunlop/MXR (who later bought the rights) still make the Rockman Guitar Ace, Metal Ace, and Bass Ace. Some users claim it doesn’t sound good. But the Rockman is designed to be used with twin Seymour Duncan Super Distortion humbuckers. Yes, Scholz is that specific. And, of course, he’d modded his own 1968 Gibson Les Paul Goldtop anyway.

Boston’s ubiquity is now the stuff of folklore: from Nirvana jokingly tipping their hat by preluding a live …Teen Spirit with More Than A Feeling, to Kyle’s dad Gerald Broflovski losing his righteous shit to Smokin’ in South Park, the sound of Boston just won’t go away. The hi-fi purist Scholz is possibly part-appalled the lo-res digital Spotify gives him 6.7m monthly listens.

An AOR blueprint. Hand-built effects. Custom EQs. A landmark in home recording. One-man ‘dual guitar’ solos. The biggest-selling rock debut LP of decade… What did you do in your house today?