The Genius Of… Dude Ranch by Blink-182

Goofy, poppy and puerile but still raw in all the right ways, Blink-182’s sophomore album is the best encapsulation of their pre-internet California punk spirit.

Here’s a fun corner of the internet: footage of people talking about it in the mid-to-late 1990s. Witness Blink-182’s Mark Hoppus and Tom DeLonge doing just that around the time they released Dude Ranch. Tom thinks aliens are behind it, prefacing his mid-career swerve into extraterrestrial affairs, but generally everyone just seems bemused by the whole thing.

The presenters in the clip affect the air of polite superiority that a lot of people do when talking about pop-punk, with little interest in scraping below the veneer. “Don’t expect any deep philosophical insights at the official Blink-182 site,” one of them says as the camera rolls over the lyrics to Dammit and a line that came to define the band and the function they provided for their fans: “Well, I guess this is growing up.”

It’s true that Blink-182 didn’t do deep back in 1997 – they did dumb and relatable, which is its own sort of philosophy. Their songs were snotty, breakneck charges written by dweebs who were always pining after a girl who’d inevitably reject them. They were stupid, sometimes mean-spirited, sophomoric and fantastic in a loose, almost-there sort of way. They felt like growing up, fucking up, making up, and learning from the experience. The rough edges that would be sanded clean on their 1999 mega-hit Enema of the State were still present, and they still sounded like friends who happened to be in a popular band rather than full-blown rock stars.

When Enema of the State hit, dominating MTV rotations on its way to multi-platinum status, it felt to the wider world like Blink-182 had arrived fully formed. The truth is that they’d ridden a groundswell of support from simple beginnings as a garage band in Poway, California. Hoppus and DeLonge met in 1992 after being introduced by Mark’s sister. Inspired by Descendents, All, NOFX and the buzzing world of California punk, they started writing songs that DeLonge has regularly described as “nursery rhymes on crystal meth”.

DeLonge would break into local high schools and place flyers for the band’s shows in lockers. Meanwhile, Blink began selling demo tapes in their local record store – and people kept buying them. DeLonge’s frantic downstrokes and open-note riffs, the twin-vocalist style – the pieces were all there in these scattershot early recordings.

The problem was that the songs generally sucked and – even on their successful 1995 debut Cheshire Cat – sounded like they’d been recorded in a wind sock. Still, support kept growing both IRL and in the nascent world of online fandom, based around Blink’s harnessing of suburban ennui and their unthreatening entry point into fast, outwardly aggressive music. Before long, Epitaph, fresh from releasing The Offspring’s game-changing Smash and Rancid’s …And Out Come the Wolves, were on their tail, along with a handful of major labels. Blink unapologetically signed with MCA. 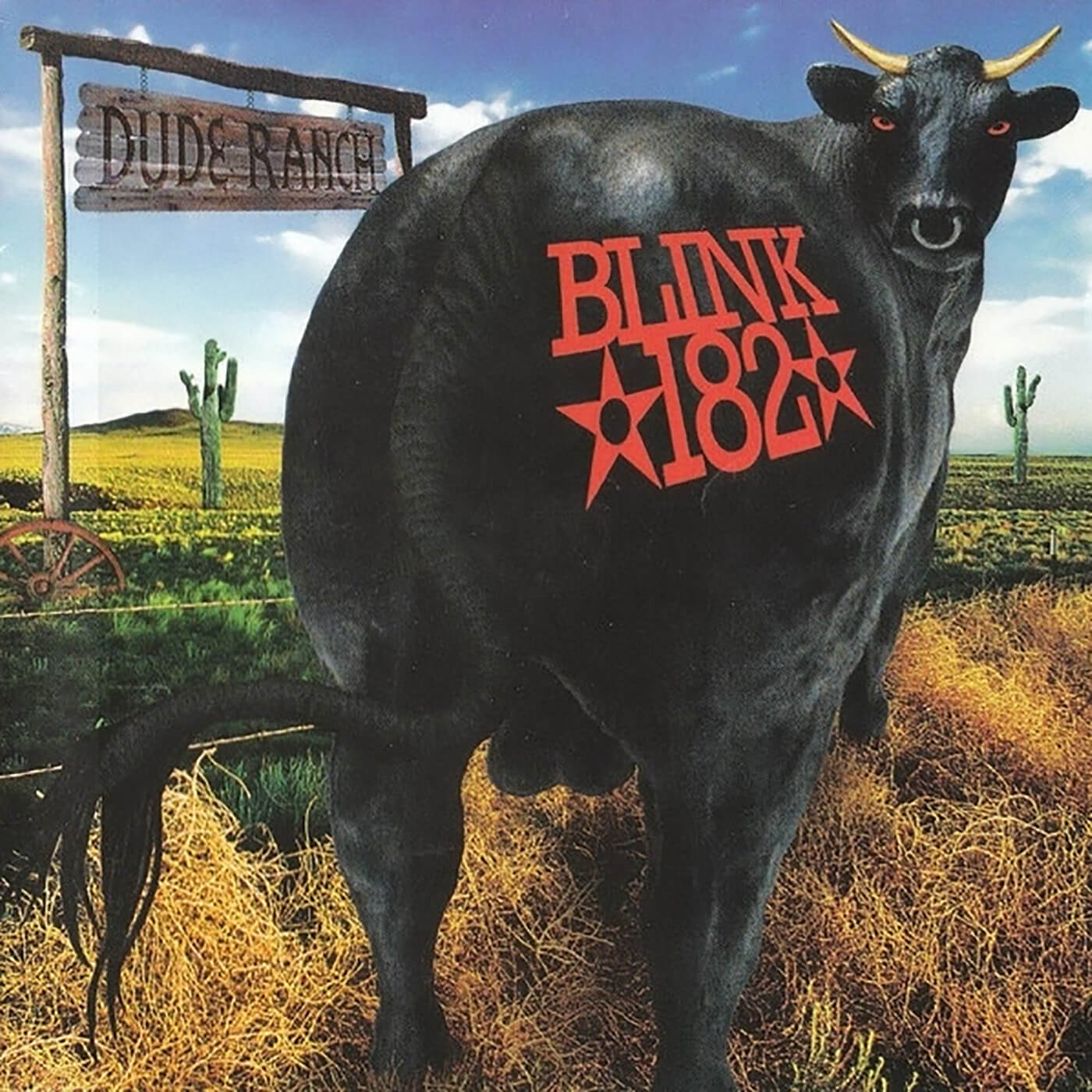 Learning on the job

Dude Ranch was recorded at Big Fish Studios in Encinitas, California, with producer Mark Trombino, who had played drums in Drive Like Jehu and worked on Jimmy Eat World’s 1996 LP Static Prevails, a Blink favourite. “Cheshire Cat had sold 70,000 records at the time we started making Dude Ranch,” Trombino told MTV News in 2017. “It was a much, much bigger record for me at the time. I was excited but also nervous and intimidated. I felt weird that there were these guys who had sold way more records than I had ever sold and I’m sitting in the producer’s chair telling them what to do.”

Trombino found a band who were switched on when it came to their trajectory and commercial ambitions, and also one that had settled into a songwriting mode that was more focused, lean and representative of what they were trying to achieve. Dammit is crucial to that. DeLonge uncorks a scattershot riff that still ranks as one of his best, followed by muted powerchords, a half-time chorus and quiet bridge, with the chorus slamming back into the room at the end alongside a descending keyboard line. All of these elements would be successfully repackaged in the band’s subsequent work – on everything from All the Small Things and Wendy Clear to Anthem, Part Two and Feeling This – making Dammit a two-minute, 40-second lightbulb moment.

Unlike these later high-water marks, though, Dude Ranch is scratchy and raw, and there’s a blown-out quality to the guitars that’s in constant combat with the vastly more refined vocal hooks. At this point DeLonge was playing a sticker-heavy Strat fitted with, if he remembers correctly, a Seymour Duncan Invader pickup. “​​When I first started playing, the Stratocaster just seemed like a cool-looking guitar,” he told us last year. “I took out all the pickups, just had one pickup and one knob. I was a punk-rock kid.”

Dude Ranch is the last time that the ‘punk’ in ‘pop-punk’ felt like the band’s dominant mode – Pathetic and Enthused rip more than almost anything in their catalogue, and could go toe to toe with any number of their more commercially reticent peers. Pre-Travis Barker, the band move in ways that are more obviously related to Face to Face or the Vandals, and only fleetingly do these songs suggest that this band is about to become one of the biggest on the planet.

That Blink would scale those heights while, for a time, retaining their goofy charm and unpretentious grounding in a years-old friendship is testament to the things they figured out about themselves on Dude Ranch. Everything went sideways later on – they broke up, reformed, DeLonge left again, with Hoppus and Barker persevering with Alkaline Trio’s Matt Skiba in his place – but 25 years ago their world was defined by dick jokes and an almost incredulous sense of possibility that spoke to kids who’d continue to grow up alongside them.