The Genius Of… Echo Park by Feeder

Kicking back against the encroachment of nu-metal and pop-punk in the early 2000s, Echo Park was bursting with Feeder’s strongest anthems.

“He’s got a brand new car… looks like a Jaguar…”. If you don’t know the rest, you probably weren’t a rock-obsessed British teen in the early 2000s. For more than 20 years, Feeder’s cardinal cut Buck Rogers has been a fist-in-the-air anthem. Its marriage of grunge-rock dynamics, hopeful yet oddball lyrics and its roaring guitar sound has made it the Newport band’s most beloved staple.

However, for Feeder’s chief songwriter Grant Nicholas, that top-five 2001 single was never intended to be the behemoth it became. “Buck Rogers is so simple it’s ridiculous,” Nicholas later admitted to Louder Sound. “But it’s the simple songs that connect with people. Sometimes you hit a formula and it just happens. You don’t always have to like it.”

Buck Rogers was the inaugural single from the band’s third record, Echo Park, which also sported the hit Seven Days in the Sun. While the explosive powerchords of this package-holiday documentation also crashed into the public consciousness, it proved much less popular than its spritely B-side, the infectious Just a Day. Released as a single in its own right at the end of 2001, Just a Day capped a year that saw Feeder become one of the UK’s brightest guitar hopes.

A different colour and shade

Slowly assembled across a year of relentless touring, the songs that would make up Echo Park were built with broader appeal in mind. But the record’s biggest hit wasn’t actually planned for Feeder at all. In truth, Grant had been writing the bones of Buck Rogers, then a lo-fi Pixies-esque noise-punk demo, for an entirely different outfit, then helmed by Black Francis and co’s regular producer Gil Norton. Sensing that something special was bubbling, Feeder elected to keep it for themselves – and keep Gil Norton for good measure.

While commercial success was an undeniable target, Nicholas’s penchant for coming up with towering choruses – previously demonstrated on the likes of 1997’s lost gem High – was balanced by a growing pessimism, borne out of a recent breakup. A mixture of moods was evident across the new material, spanning the likes of the assured We Can’t Rewind, the serene Satellite News and the introspective Turn, each bringing more shades to the table.

A longtime Jazzmaster aficionado, Grant had warmed to Fender’s iconic offset guitar from a young age, as he told us in 2019. “I just fell in love with the shape of it. I like guitars that have a little bit of weight to them, and also it being the longer scale. I love the Jag and the Mustangs, but the Jazzmaster just suited my playing more and suited my style.”

Throughout the writing of Echo Park, Nicholas was keenly aware of the variety of tones that his 1964 Silver Jazzmaster could conjure – particularly when switching pickups mid-song – in combination with his pedalboard.

By augmenting these expanded guitar sounds, Nicholas brought a wider assortment of instrumental textures to the arrangements. Check out the swerving sonic shape of opener Standing on the Edge, the hazy acoustics of Piece by Piece, and Oxygen’s cloudy B minor arpeggios – all further coloured by high-pass filters, lo-fi drum loops and sci-fi synth leads, respectively. 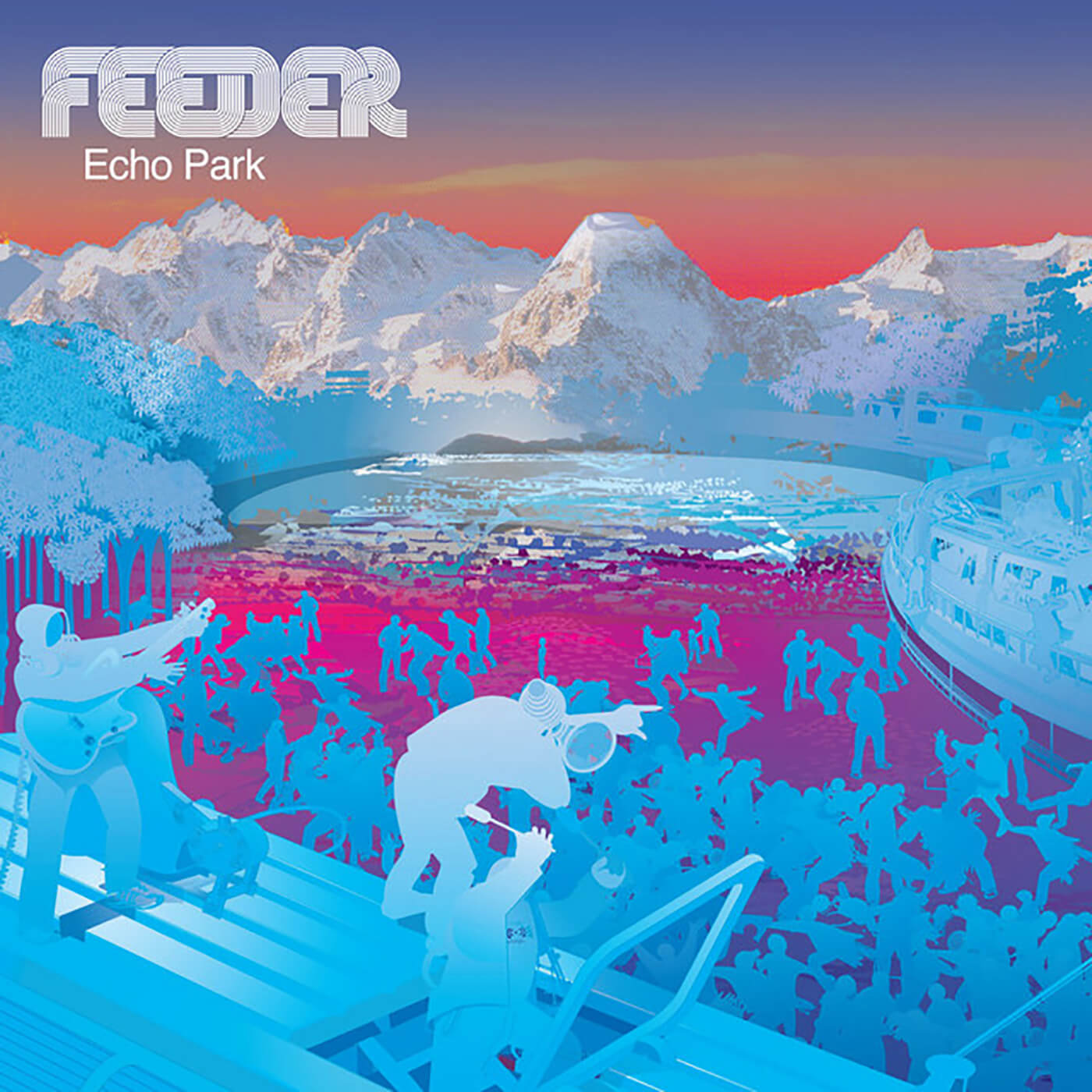 A place inside your mind

Released on 23 April 2001, the band beamed as the album sailed straight into the mainstream and secured a top-five placement in the UK album charts. Though meeting its objective, this fame resulted in a strange dichotomy for Feeder: they were suddenly alternative enough to grace the pages of Kerrang!, as well as accessible enough for the kids’ Saturday morning chart show CD:UK.

Perhaps due to Feeder’s cultural position being difficult to define in the music media, Echo Park has been overlooked in the two decades since its release. For British music fans at the time, though, Feeder’s third album was hard evidence of the teeth of homegrown rock. Alongside the likes of Muse and Ash, Feeder stood up to the weighty powerchords of the era’s other guitar bands, Limp Bizkit, Linkin Park and System of a Down. Hard-hitting Echo Park cuts such as the punky Under the Weather, chainsaw closer Bug and the ever-ubiquitous Buck Rogers bruised with the best of them.

The exhilaration of 2001 wouldn’t last however. The following year, drummer and founding member Jon Lee took his own life. Though the loss was devastating, Grant and bassist Taka Hirose continued on. With the elegant Comfort in Sound, the pair built an album that channelled their grief into a touching tribute that also signalled their creative resilience.

When we think of Feeder, however, we can’t help but think back to those giddy days when Buck Rogers and its parent album soundtracked our after-school hang-outs. For many British kids, Feeder’s third LP juggled the power of contemporary alt-rock with wider textures to reflect something a little closer to home than the work of their US counterparts. With references to Devon and Nurofen Plus, Feeder’s songs made far more sense than the majority of the California-aligned MTV2 fare of the day.

While the critics in charge of the rock canon uphold the familiars, the Is This Its, the White Blood Cells and those other early 21st-century rock touchstones, we’re not embarrassed to admit that Echo Park got more plays than them all.