The Genius Of… Electric Warrior by T. Rex

Marc Bolan more or less invented glam-rock 50 years ago this month, unveiling an album simmering with androgynous sexual imagery that hosted one of the most electrifying rock’n’roll riffs of all time.

A self-proclaimed “cosmic dancer”, who DJ John Peel nicknamed the “flower child with a knife up his sleeve”, Marc Bolan never suffered from a deficit of self-belief. “You play a C major chord and I hear 25 melodies and symphonies… it gushes out of me,” he once boasted of what he deemed super-human songwriting abilities. With his second album as T.Rex, the androgynous glitter-flecked pixie superstar could lay claim to inventing glam rock.

Electric Warrior was certainly the first glam album to top the UK charts, spending eight weeks at No.1 after its release in September 1971. Despite the unrefined 50s rock’n’roll fundamentals of Bolan’s riffing and the occasionally nonsensical mysticism of his lyrics, here was a revolutionary record that altered the course of rock history, unleashing a glam wave that would be surfed by David Bowie, Slade, Mott The Hoople et al deep into the 70s.

Despite his boundless confidence, the path to stardom was not without obstacles for Bolan (born Mark Feld). Initially a mod, his early adventures displayed a fascination with Bob Dylan – his first acetate, under the name Toby Tyler, included a cover of Blowin’ In The Wind, and he delivered his folky incantations with an acoustic guitar, sat cross-legged on the floor.

The full debut Marc Bolan single (featuring both Jimmy Page and Big Jim Sullivan) was tellingly called The Wizard and in 1967, Bolan formed acoustic duo Tyrannosaurus Rex with Steve Peregrin Took. Yet it was only when he ditched Took and the acoustic, shortening the band’s name to T.Rex, that Bolan’s career ignited. The new band’s debut single, Ride A White Swan “inadvertently founded glam rock mania,” claimed AllMusic’s Ned Ragett.

Bolan was by now playing a late-60s Olympic White Fender Strat with rosewood fingerboard and Ride A White Swan was a No.2 hit in January 1971, only kept off the top by Clive Dunn’s mawkish novelty record Grandad. With the wind now in Bolan’s sails, Hot Love and the lusty Get It On both climbed one position higher, at their peak each selling around 60,000 copies a day as Bolan prepared to roll out his first great album. It was the moment, wrote Chris Jones of BBC Music, that the Tolkien-obsessed troubadour took “the hippy-dippy lyrics and Larry the lamb vocal stylings and bolted them on to good old stripped-down, four-to-the-floor rock’n’roll.”

Bolan’s guitar odyssey began at the age of 12. A hungry consumer of Little Richard, Eddie Cochran and James Burton riffs, he later became obsessed with Eric Clapton and Jimi Hendrix. While he never developed technical chops in the same league as either of those pioneers, Bolan was an under-appreciated player who was brave enough to venture outside of existing pentatonic frameworks. Among his many A-list fans, Paul Weller has praised his style as “really unique… you know his sound instantly” and you can hear T.Rex’s influence on everyone from Prince to Primal Scream – not least Noel Gallagher, who pilfered the riff from Get It On for 1994 Oasis single Cigarettes & Alcohol.

Perhaps best placed to appraise Bolan’s guitar playing was his trusted producer Tony Visconti, who helmed Electric Warrior. Visconti believes Bolan is “criminally underrated”. He told Performing Songwriter: “Marc was a very innocent guitarist, and sometimes he would play very strange things. In his mind he might be playing a blues lick, but it might not have the flatted 3rd, or something would be not bluesy about it.” Rather than try to correct these idiosyncrasies, on Electric Warrior Visconti embraced Bolan’s excursions outside the box, instructing the strings section he’d enlisted to double his parts.

By the time he recorded Electric Warrior in New York and LA between tour dates, Bolan’s Strat had been joined by a Gibson Flying V and his famous ‘Frankenstein’ Les Paul, bought in 1970 and believed to be a 50s Goldtop. The guitar had already been fitted with at least one replacement neck and was refinished in a translucent orange hue its owner called ‘Bolan Chablis’, a nod to Cochran’s Gretsch 6120. 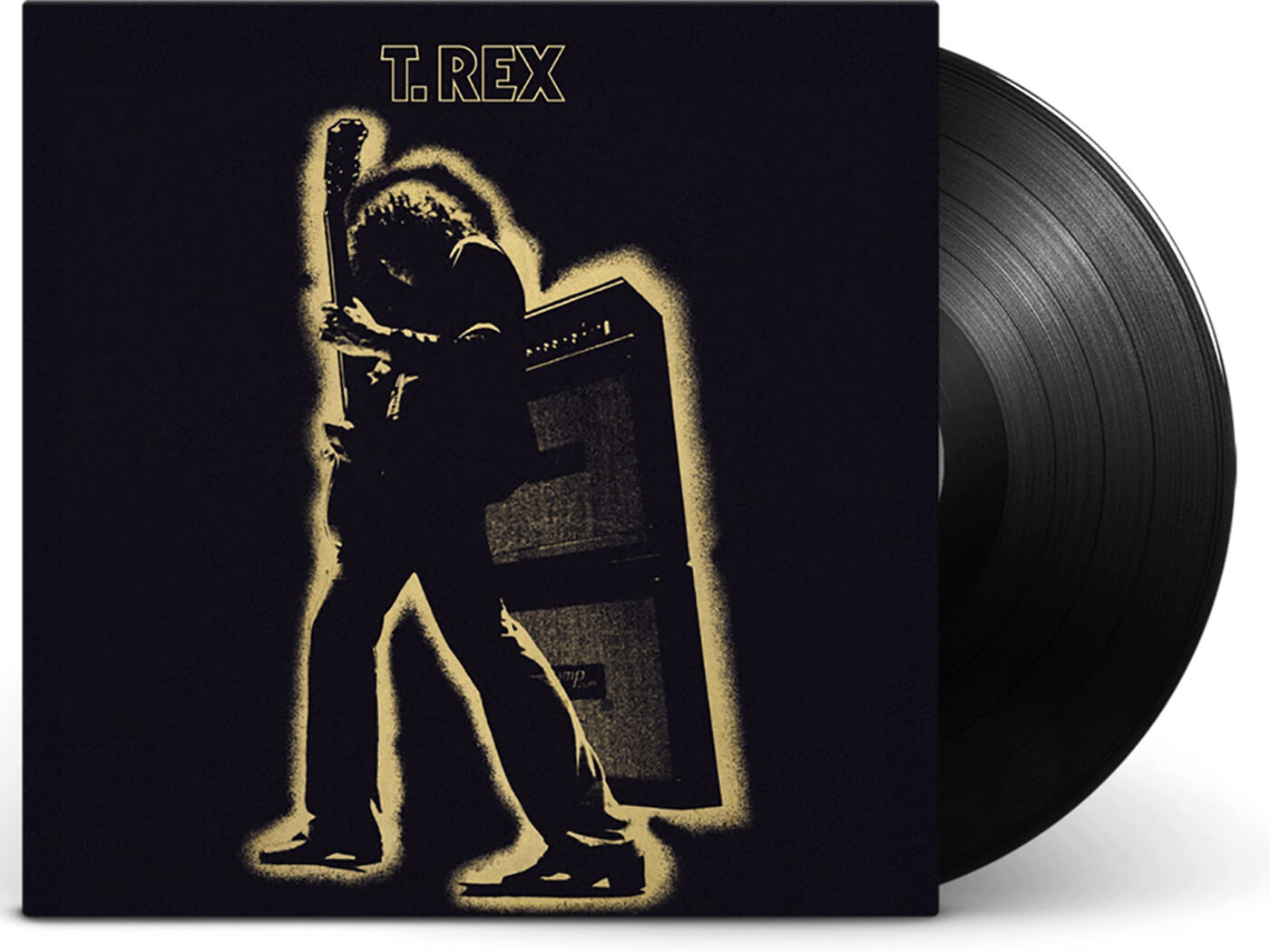 Driven from the outset by Bolan’s chugging boogie, Electric Warrior will always be remembered best for its singles. Get It On’s raunchy palm-muted powerchord shuffle in E is one of the most memorable riffs of all time. Borrowing from Chuck Berry’s Little Queenie, the wanton Les Paul into Marshall snarl is augmented by Blue Weaver’s electrifying piano glissando and romping saxophone interjections from King Crimson’s Ian McDonald. It’s pure sexuality, Bolan purring “you’re an untamed youth… you’re dirty, sweet and you’re my girl”.

Number two hit Jeepster, based loosely on Howlin’ Wolf’s You’ll Be Mine, is littered with barely veiled sexual metaphors and propelled by an insistent blues groove in A, with the chorus shifting into C. “I don’t sing the old rock’n’roll songs myself. I prefer to change the words and make new songs out of them. That’s all Jeepster is,” Bolan admitted of his mining of rock’n’roll history.

The thick dropped-pitch riffs and solos exploding around the simple G/D/A minor acoustic progression on the single’s flipside Life’s A Gas are typical of Bolan’s intrepid lead approach, and its pained opening couplet “I could have loved you girl, like a planet/ I could have chained your heart to a star” is sublime universal romanticism.

Away from the chart hits, Visconti’s string arrangements imbue Electric Warrior with greater depth. Just listen to the way Cosmic Dancer is elevated by the contributions of some 20 orchestral players, their dramatic cello stabs and shimmying violin phrases darting through the mix before Bolan’s otherworldly reversed soloing bestrides the outro.

Somewhat less urbane, The Motivator is Bolan covering himself – recycling the melodies from Get It On, with the addition of some bongos, and gushing “I love the clothes you wear/ they’re so mean, so free, they’re so handsome.”

Scorned in the USA

Released on 24 September, 1971, Electric Warrior ruled the UK album chart for eight weeks. “I feel as though I could go on writing number ones forever,” a typically assured Bolan told Record Mirror. “The majority of pop hits are a permutation on the twelve-bar blues and I’ve found one that works.”

Yet despite their adoration at home, T.Rex were never embraced in the US, where Bolan was met with cool indifference. According to Visconti, it was down to a perception that he wasn’t a “serious” musician. “Marc wasn’t the world’s best guitarist,” he told Performing Songwriter. “People saw something not genuine in him, the American public and media didn’t take him seriously.”

John Peel, so supportive of Bolan’s early career, was unimpressed that he’d abandoned psychedelic folk in search of chart success, but the importance of Electric Warrior is inarguable. Al Spicer nails it in the Rough Guide To Rock, describing “Teenage music at its best. Trashy, sleazy drug-induced nonsense, screamed as if it were the meaning of life.”

Alas, such vertiginous highs would be short-lived. T.Rex repeated the success of Electric Warrior with 1972’s strong follow-up The Slider, but by the middle of the decade the shine of Bolan’s satin-draped glam pomp had dulled. In 1977, he was living in the US with Gloria Jones and planning a bid to relaunch his career when the couple were involved in a car crash that ended his life. There’s a strange poignancy in the incongruous, sombre cello sweep that concludes Electric Warrior and the sadly unfulfilled words from one of its most memorable tracks: “It really doesn’t matter at all/ life’s a gas/ I hope it’s gonna last.”