The squall summoned by the late Matt Bellinger and Gared O’Donnell has never sounded more necessary than on Fuck With Fire. Here’s why there will never be another record like it.

It hurts to know that these voices aren’t with us anymore. Gared O’Donnell, and his barrel-aged rasp, left us last autumn. Matt Bellinger, his scratchy, unpredictable sparring partner in the early days, has been gone for almost five years now. But the music they made together in Planes Mistaken for Stars is impossible to forget, which means they are too, even to those of us who only knew them from CD booklets and cramped shows.

All hardcore, or post-hardcore, bands are heavy. But not all hardcore, or post-hardcore, bands rock. Rock like AC/DC rock. At almost every stage of their existence, Planes Mistaken for Stars rocked. “Their equipment was held together with duct tape and dried sweat,” journalist and former tourmate Jason Heller wrote in Westword back in 2004, describing some of their earliest shows. “And their music? It was a geyser of violence, a sloppy mess of sheer passion.”

Come on feel the Illinoise

Planes Mistaken for Stars formed 25 years ago in Peoria, Illinois, settling en masse in Denver, Colorado a couple of years later. In the late 1990s, post-hardcore in the United States was stuck between stations. On one hand, Fugazi were heading for the exit, and Drive Like Jehu and Quicksand were already on the slab. But, on the other, At The Drive-In were bubbling under and we were only a few years away from bands such as Glassjaw and Thursday breaking through, setting the scene for My Chemical Romance to ascend to massive commercial crossover success. Nothing was all that codified, so some real weirdos could slip through and make noise.

Bobbing in the choppy wake of Jawbreaker and Texas is the Reason, Planes Mistaken for Stars’ personal influences imparted something different to their stew. Bellinger was a punk with an ear for country and psychedelic rock, while O’Donnell grew up blasting the Santa Cruz ‘Streets on Fire’ skate film from his grandparents’ TV, scarfing down a scabrous formative diet of songs by Black Flag, Sonic Youth, Minutemen, and Firehose. They came up emo-adjacent – which is readily apparent on their brilliant early self-titled record and the Knife in the Marathon EP – but got the hell out of there before it stuck.

Along with gutpunch guitars and nihilistic abandon, it’s a later love for the Replacements that shines through when watching the Planes Mistaken for Stars film in reverse: they had the same bleak seam of Midwestern romance, and decent approximations of Bob Stinson’s livewire energy and Paul Westerberg’s desire to throw indelible hooks into the woodchipper, revelling in the gore. They often looked like hammered shit, but they looked like a gang. “We wanted to look like Black Oak Arkansas or Lynyrd Skynyrd or Thin Lizzy,” O’Donnell told Dan Ozzi in his Reply Alt newsletter a couple of years back. “We always felt like we had more in common with Thin Lizzy than, say, Sunny Day Real Estate.” 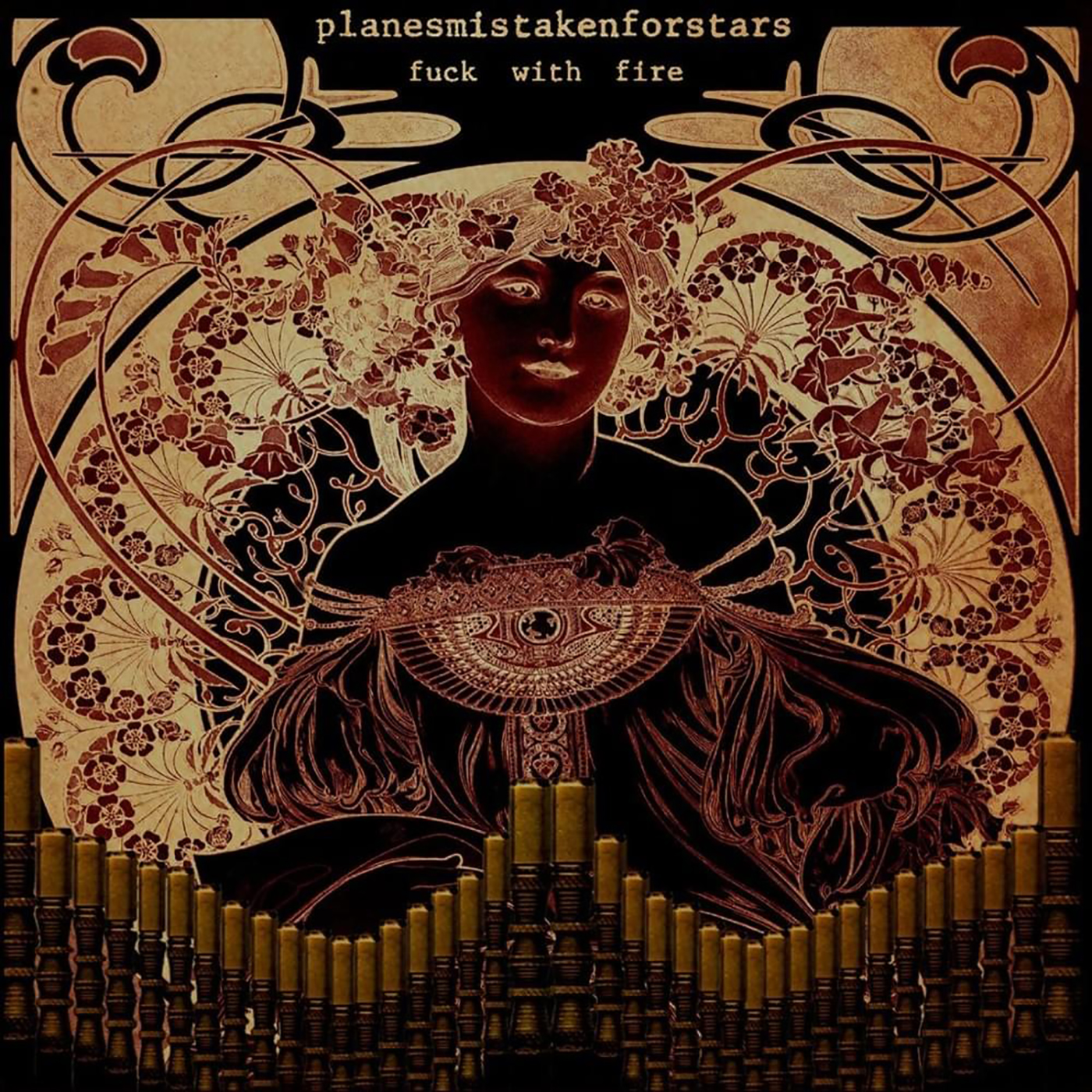 Released by the Gainesville punk institution No Idea in 2001, Fuck With Fire put open water between Planes Mistaken for Stars and the emo movement. It sounded hellish: grotty and visceral and unique. It had something in common with the gruff melodicism of labelmates such as Hot Water Music – see the first verse of Bloody But Unbowed – but where that band aspired to a sense of communal release, Planes Mistaken for Stars chose to present their work in a way that was deliberately confrontational. It would let you in on its secrets only if you put the time in.

The word for it is chaos, and you have to embrace that chaos. O’Donnell and Bellinger’s guitars slash and windmill across one another – all Gibsons, mainly SGs, molasses-thick and snarling – just as every one of the former’s bellowed hooks is answered by a screeching, wide-eyed counter-hook from the latter.

“We just wanted it to sound like a cacophony, and it does,” O’Donnell told Ozzi. “We achieved what we wanted but I think it made the record suffer in the long run, because there’s a lot of little intricacies that you cannot hear. Even if you remix it, I think it’d still be buried. The melodies and countermelodies Matt was doing were gorgeous and we just slammed through them.”

He’s totally right, but that’s not the full story. From an outside perspective, there is both an adrenaline-fuelled rush to contend with, and the knowledge that there are hundreds of flourishes that will only reveal themselves after multiple sessions of close listening. There’s something to be said for the reality of having to get in the shit with the band to understand the whole picture.

In this dynamic, the rhythm section is vital in keeping the listener rocked back on their heels. When O’Donnell and Bellinger come together with a riff or flurry of octaves, bassist Jamie Drier and drummer Mike Ricketts offer grinding, off-beat support, with spiralling snare rolls and cymbal splashes in place of anything recognisable as a groove. Until they decide not to do that anymore and instead lock together on the closing stages of something like Hollowpoint and Whiskey. Then, all of a sudden, the flailing fists of the bar fight are gone and you’re being stamped into a cold, hard floor that doesn’t care who you are or where you come from.

To argue that Fuck With Fire is the best record Planes Mistaken for Stars ever made would take some doing, but you’d probably find some vocal supporters. What it did was establish some parameters in which the band could refine and push their sound to fresh heights. With 2004’s Up In Them Guts they cleaned things up a little and found that they could still absolutely decimate a room without descending to the griminess and mayhem of its predecessor. On Mercy, their first release without Bellinger, who left the group in 2006 and tragically passed in 2017, aged 40, they riffed hard, bringing out elements of stoner metal to try and contend with O’Donnell’s vocals, which had never sounded better.

For almost a decade, that appeared to be it. But in 2016 Planes Mistaken for Stars returned with Prey, a record that proved they still had the tightest of grips on everything that made them so beloved by those who’d managed to catch their drift. O’Donnell died of esophageal cancer in late 2021. There will be more Planes Mistaken for Stars music, with incomplete recordings on their way to being finished by his bandmates, but there will never again be a moment when he and Bellinger whip up the sort of frightening, exhilarating storm that could exist between them. They’re sleeping now, in the space between a swing and a hit.

Planes Mistaken for Stars, Fuck With Fire (No Idea, 2001)