The product of an introverted genius, Neutral Milk Hotel’s second album is a tangled web of distortion and surreal imagery haunted by the ghost of Anne Frank. It was both the band’s defining and final statement.

Ghostly apparitions, Siamese twins trapped in a jar, dark suggestions of incest, the haunting presence of Anne Frank, an acid-addled brass band and an all-encompassing blanket of distortion… Neutral Milk Hotel’s second album is a dizzying vaudeville carnival procession that assaults the senses.

The story behind this enchanting and often unsettling fuzz-folk treasure began in Ruston, Louisiana, where Jeff Mangum formed the Elephant 6 collective, before unfurling across the United States as he accumulated a gang of misfit musicians who shared his determined DIY ethos.

The band’s 1996 debut album On Avery Island, produced by Mangum’s childhood friend and unofficial band member Robert Schneider, offered glimpses of the lo-fi yet expansive studio vision that would shape In The Aeroplane Over The Sea’s wild, unkempt beauty. “That’s how I learned to produce,” said Schneider of how he made the intricate sketches in Mangum’s head reality. “I totally had to let go of what I thought it should be like.”

Having left Louisiana behind, the impoverished band members lived for a while with multi-instrumentalist Julian Koster’s grandma in New York. “There were tape loops strung all over the apartment,” recalled Koster, “enormous loops that would go across the entire room.”

Later, they shared a house in Athens Georgia, where music filled every room as Mangum paced around with an acoustic guitar, perfecting his masterwork.

Mangum, who suffered terrifying nightmares and frequently sleepwalked, claimed he didn’t write the songs on Aeroplane so much as channel them. He became deeply obsessed with the spirt of Anne Frank, whose diaries he had just read, and the new songs somehow wove together his love of The Beach Boys, Sonic Youth, Daniel Johnston, music concrète, free jazz and a Bulgarian women’s choir, as well as upcycling sections of his own huge archive.

It was clear to all involved that something special was gestating as they began recording at Schneider’s Pet Sounds studio in a former fish processing plant in Denver in July 1997. “It was a labour of love for me,” Schneider told the 33 1/3 book series. “I wanted to make the perfect psychedelic pop, Revolver kind of record.”

It’s not so much the guitar parts Jeff Mangum plays on In The Aeroplane Over The Sea that make it such a singular record, it’s how those guitar parts were recorded. An owner of a Gibson ES-125 and an American Standard Strat, the majority of Mangum’s contributions came instead from a close mic’d acoustic. The raw, saturated fuzz-like distortion that permeates every captivating corner of the album was created not with a Big Muff or Pro-Co RAT, but by routing a Neumann U87 into an overloaded Bellari RP-220 tube mic preamp and recording everything to analogue tape.

Schneider didn’t stop at guitar, either. Flugelhorns, accordions, drums, banjos, a saw… pretty much every instrument swept up into the album’s complex arrangements got the same faux fuzz treatment.

Mangum’s vocals, meanwhile, were a breathless assault, cramming a seemingly endless cascade of syllables into each surreal, chimerical line. “A continuous stream of words keeps coming out like little blobs, usually in some sort of order,” he told the Puncture fanzine. Mangum felt the labyrinthine, cryptic puzzle he was assembling could never be truly complete, but by September it was ready, although he struggled to process what the band had created. “A lot of the songs on Aeroplane really freaked me out,” he admitted, “and it took other people to make me be comfortable with them.” 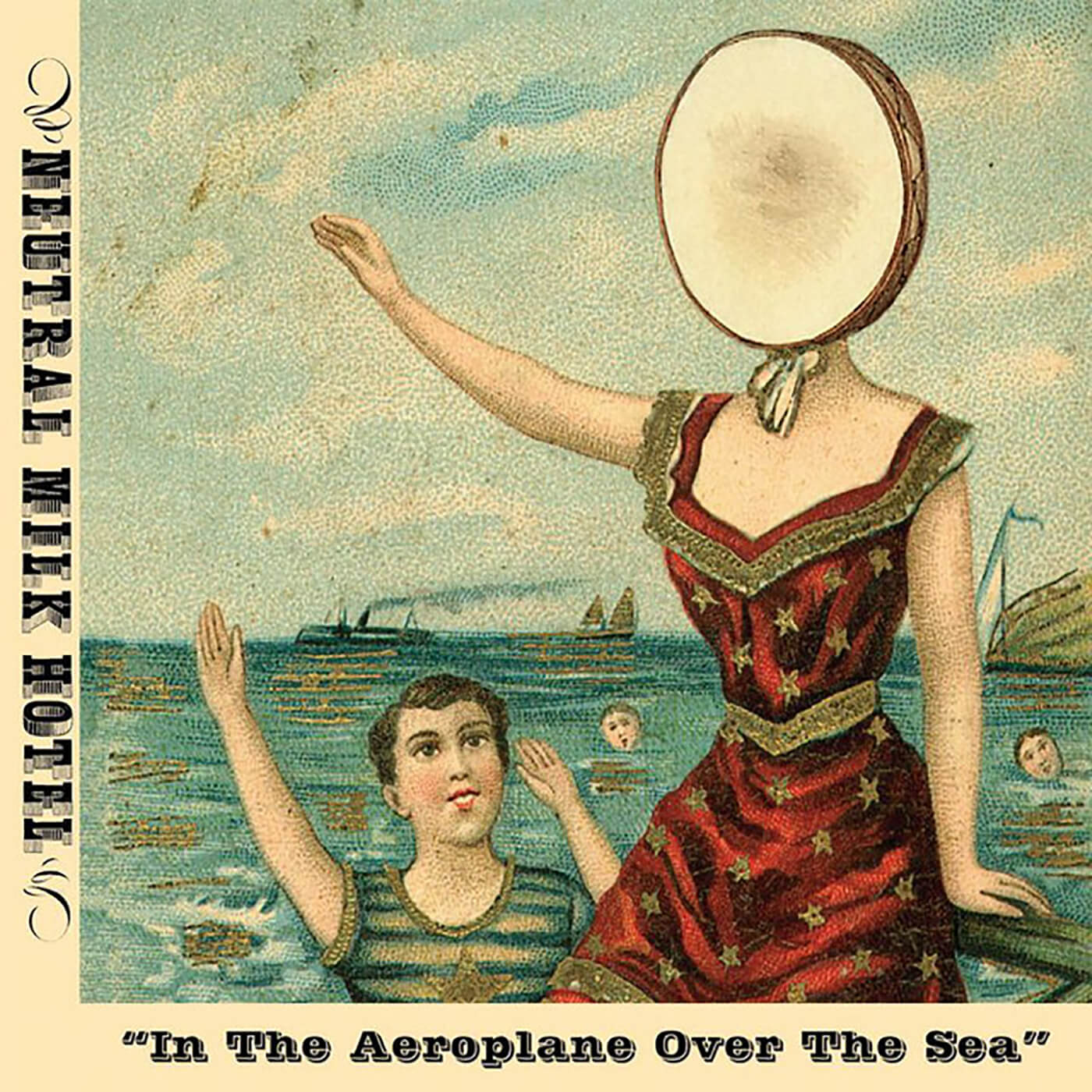 In your heart there’s a spark

King Of Carrot Flowers Pt. 1 is a gentle introduction to the untamed madness that follows. Mangum’s voice is muted and he plays only three chords – F, B♭ and C, his powerful strumming dominated by downstrokes and doubled by Schneider to beef up the sound. Lyrically, Mangum is back in childhood, re-immersing himself in formative experience as he sings evocatively “we would lay and learn what each other’s bodies were for”.

Things get a lot stranger as we segue into Pts. 2 & 3, Mangum’s voice a jagged rasp as he lays bare his faith with the opening lyric: “I love you Jesus Christ”. A lone trumpet salute pierces a fog of abstract noise and the song careers into distorted mayhem, Mangum conjuring bizarre imagery such as “the marriage of a dead dog sing, and a synthetic flying machine”. Koster’s overdriven (of course) bowed banjo was retained despite, or maybe because of, being out of tune.

The title track centres around a simple syncopated G, Em, C, D progression in 6/8, Anne Frank gazing down, her “ghost all around” and there are even more overt references on Holland, 1945. “I would go to bed every night and have dreams about having a time machine and somehow I’d have the ability to move through time and space freely, and save Anne Frank,” said Mangum.

Two Headed Boy cycles between G and B in the verses, the second major chord adding an air of discordancy, and Mangum’s writing as sharply surreal as prime mid-60s Dylan. His final verse is a thing of devastating beauty, as he sings “The world that you need is wrapped in gold-silver sleeves, left beneath Christmas trees in the snow.”

The album’s longest song, Oh Comely, again flooded with images of Frank and delivered with eviscerating intensity by Mangum, was recorded in a single live take and initially intended as a trial run. The control room burst into applause at its conclusion and you can just about hear horn player Scott Spillane yelling “holy shit” in amazement at what he’d just heard.

Two Headed Boy Pt. 2 emerges from a swirl of tape oscillation, before the first couplet yields a revelatory line that’s maybe autobiographical: “in your heart there’s a spark that just screams”. This final song feels like Mangum tying up some of the disparate threads he’s introduced over the last 39 bewildering minutes, although naturally he leaves us with as many questions as answers.

In hindsight, 1997 and 1998 were a mini post-Britpop golden period that saw the release of a series of cerebral alternative masterpieces. Radiohead’s OK Computer, Deserter’s Songs by Mercury Rev, Ladies & Gentlemen We Are Floating In Space by Spiritualized, Elliot Smith’s XO and Either/Or… In The Aeroplane Over The Sea is up there with the best of them. Yet the initial response to Mangum’s opus was somewhat muted, with Rolling Stone scoring the album a lukewarm 3/5. However, its legend has swelled incrementally. When it was reissued in 2005, Pitchfork responded with a rare 10/10 review, while Magnet magazine judged it the best album of the 1990s. Writing in The Vinyl List, Luke Winkie summed up In The Aeroplane Over The Sea’s enigmatic appeal perfectly: “It’s an album on the edge of a universe… nobody will ever be completely satisfied. And that’s why we love it.”

When they came to tour the record, the broiling intensity of Neutral Milk Hotel’s live performances often left their audiences scared and unsure what they’d just witnessed. It was beginning to prove unsustainable for the band’s members, too, particularly their leader. His partner and bandmate Laura Carter told 33 1/3: “He was in a position where all of his buddies wanted to keep going and he wanted to drop out and be like Robert Wyatt – be a recluse then come out with an album in 10 years.”

In October 1998, exhausted and alienated by the glare of minor fame, Mangum finally called it a day, a decision which immediately fuelled the mythology surrounding In The Aeroplane Over The Sea.

Neutral Milk Hotel reunited in 2013, touring for a further two years, including a transcendental Green Man festival headline show that rendered many onlookers shell-shocked. But it couldn’t last. They left us, again, with a brief message on their website: “Dear friends we love you but it’s time to say goodbye for the never ending now.”

Neutral Milk Hotel, In The Aeroplane Over The Sea (Merge, 1998)