The Genius Of…  Insomniac by Green Day

Why Billy Joe Armstrong tossed the sunny post-Dookie expectations in the bin for a “cocktail of bad vibes and a final bitter dalliance with the straight-ahead punk scene that had borne them."

Green Day’s Insomniac answers a very specific question: what happens when someone looks in the mirror and sees the same shitbag kid as before, but the world outside keeps telling them they’re not only a rock star, but a sellout rock star?

In 1994, punk exploded back into the mainstream, with Green Day’s rubicon-crossing major label debut Dookie and the Offspring’s Smash at the forefront of the conversation.  Very quickly, Billie Joe Armstrong, Mike Dirnt and Tré Cool became one of the biggest bands in America. But back home in Berkeley, California they were pariahs. “I felt like I was being run out of town,” Armstrong told Ian Winwood in Smash!.

Following their relatively painless exit from Lookout! Records, who had released 39/Smooth and Kerplunk!, Green Day were banned from the tight knit hub of 924 Gilman, the strict ethics-first venue co-founded by Maximumrocknroll’s Tim Yohannan, who had always hated their pop instincts.

“The last show before they signed the contract was in Petaluma at the Phoenix Theater,” Gilman regular Ben Saari said in Gimme Something Better, Jack Boulware and Silke Tudor’s oral history of Bay Area punk. “There were tons of people. Everybody knew the next day they were signing the deal with the devil and everything would suck. They would be sellouts, nobody could be friends with them, they would be on tour forever, they would blow up.”

But there was hurt on both sides of the debate. The band had learned the ropes at Gilman and owed more to Isocracy or Operation Ivy than they did to the Clash or Buzzcocks. And they still cared – they didn’t take their Lookout! records with them and the label’s bands (like Pansy Division and the Riverdales) continued to open for Green Day after they broke big.

Still, as Dookie smashed through sales ceiling after sales ceiling – five years after its release it went Diamond in the US – these sentiments festered. Green Day toured forever, and they blew up. Both things ate away at their mental health. They were strung out, exhausted. Their response to this cocktail of bad vibes was Insomniac – 32 minutes of spite released barely 18 months on from its blockbuster predecessor.

Insomniac still stands as Green Day’s most punk record, channelling outsider bile into a batch of songs that kick like a mule thanks to a studio stance that prioritised loud, louder, loudest. Having plugged his iconic, heavily-stickered Fernandes Stratocaster (nicknamed ‘Blue’) into a 1971 Marshall Plexi Super Lead belonging to producer Rob Cavallo on Dookie, Armstrong wanted something harder this time around.

Winwood notes that Custom Audio Electronics’ Bob Bradshaw was called upon to advise, adding in a 100-watt Marshall amp and an SE lead mod to provide bite. “[Billie Joe] thought it worked with the record’s unapologetic mindset,” the returning Cavallo observed. In the harrowing stomp of Geek Stink Breath and Brain Stew, and Jaded’s breakneck charge, they nailed the required buzzsaw mayhem. 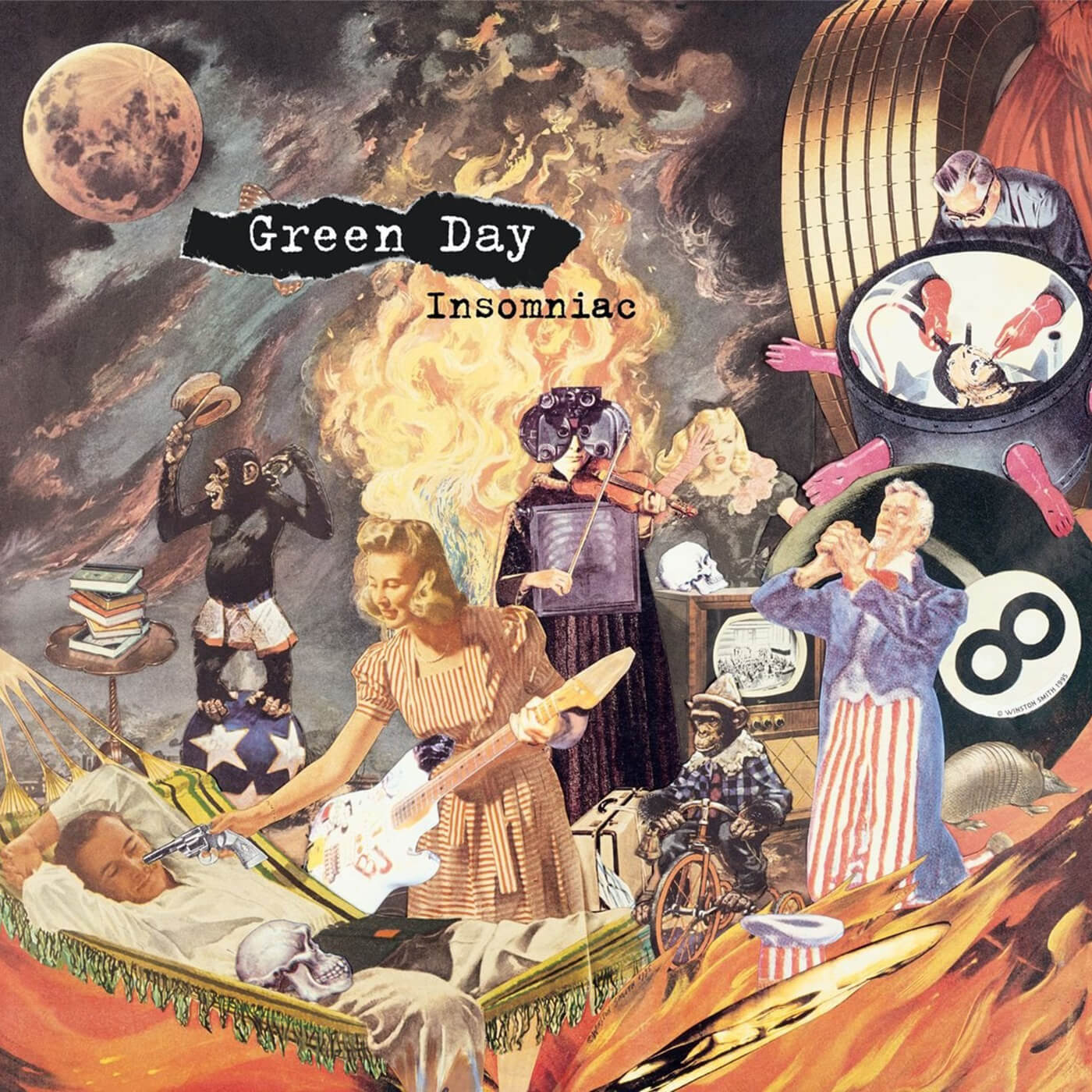 With Insomniac, Green Day sought to back up Dookie while giving voice to the gnawing alienation they felt after finding the promised land to be a web of contradictions. The two sides clashed headfirst on the snotty roar of 86, a song about Gilman that they performed in incendiary fashion on Letterman. “Exit out the back,” Armstrong sings of being ‘86’d’ from the scene. “And never show your head around again.”

The track comes alive in the exorcising chug of his guitar, and throughout Insomniac Armstrong plays as though he’s one step away from total implosion. The next cab off the rank, Panic Song, pushes that idea even further as Dirnt and Cool hammer at their instruments before Armstrong crashes in with another bug-eyed bubblegum hook. “Well, the world is a sick machine breeding a mass of shit,” he spits. “With such a desolate conclusion fill the void with…I don’t care.”

The reviews for Insomniac ranged from decent to tepid to insulting. Rolling Stone basically said it was good, for a punk record. Generally, it was viewed as Dookie without the sense of fun and that was reflected in its sales, which were massive, but not Dookie massive. The record peaked at No 2 on the Billboard 200 and by 27 February 1996 had gone double platinum in the States. “It’s not easy being Green Day… the sellout band that isn’t really selling,” ran a headline in the Washington Post.

Green Day hit the road again, this time as an arena draw. But this era didn’t lend itself to triumphalism. They cancelled the final batch of dates to return home to their young families, worn out and homesick. Insomniac remains an island in Green Day’s discography. They followed it with the sprawling Nimrod, home to outright ragers, novelty songs and heartfelt acoustic ballads, where the road to American Idiot’s concept sprawl began to light up before them.

But in these songs they bottled fear, hope and anger. They’re alive and exciting all these years later because they lay it all out there and don’t treat the listener with kid gloves. If punk rock is about honesty, then Insomniac is punk rock down to its bootlaces.