The Genius Of… New Miserable Experience by Gin Blossoms

By the time Gin Blossoms erupted on the radio, the band had already imploded, and its dynamite songwriter was lost at the bottom of the bottle.

“Tomorrow, we can drive around this town…”

There’s more weight hanging on that tomorrow than there might be in other circumstances. The chorus of Gin Blossoms’ Hey Jealousy is one of rock music’s great bait-and-switches – it promises freedom, abandon, rebellion, hit after hit after hit. But it’s a miserable song. Its giddiness is all surface. It’s really about regret, and missed chances. Thirty years later, it’s still about Doug Hopkins.

It’s always particularly cruel when a band or song blows up with someone on the outside looking in. Hopkins wrote Hey Jealousy in the late 1980s – it’s about drinking and missing someone who’s cut ties with you because you’re always drinking. It’s about Hopkins and his ex, and in 1992 it came to be about Hopkins and Gin Blossoms, who fired him as they worked on their major label debut​​ New Miserable Experience.

Hopkins took his own life with a pawn shop gun in December 1993, a few months after Hey Jealousy hit its peak on the Billboard chart. He was 32. The song’s success confirmed Gin Blossoms and his writing as a sleeper hit with folks who had angst to burn but maybe didn’t have the stomach for grunge. “It wasn’t the Blossoms, it wasn’t a gun, it was alcohol that killed Doug Hopkins,” his friend and bandmate Lawrence Zubia said at the time. “He couldn’t give it up.”

Hopkins co-founded Gin Blossoms with bassist Bill Leen in 1987 in Tempe, Arizona. By the following year, they were shuffling members around the place, with Jesse Valenzuela shifting from vocals to rhythm guitar, allowing Robin Wilson to go the opposite direction. Within a short while, they became something close to the house band at Long Wong’s in the city, rattling off wild, boozy sets on Friday and Saturday nights.

“They would play all night long… so you can imagine how many beers and whatnot made their way to the stage,” booker Sara Cina told Phoenix magazine’s Niki D’Andrea in 2014. “So by the end of the night, there were all kinds of crazy things. Robin and Doug would do chicken fights, and Robin would jump on top of Doug, and people in the audience would do the same thing, and they’d have chicken fights while Doug’s playing guitar and Robin’s singing.”

There’s some of this loose, wooly wildness in Gin Blossoms’ first LP, Dusted, released in 1989 by the tiny label San Jacinto Records. Here, with an amped-up and slightly too-fast Hey Jealousy at track nine, the band are more Replacements than chart certs. In that setting, Hopkins’ excesses would’ve been part of the furniture. But that wasn’t where this train was headed: they split for the majors early, not late, and in 1990 they signed with A&M. 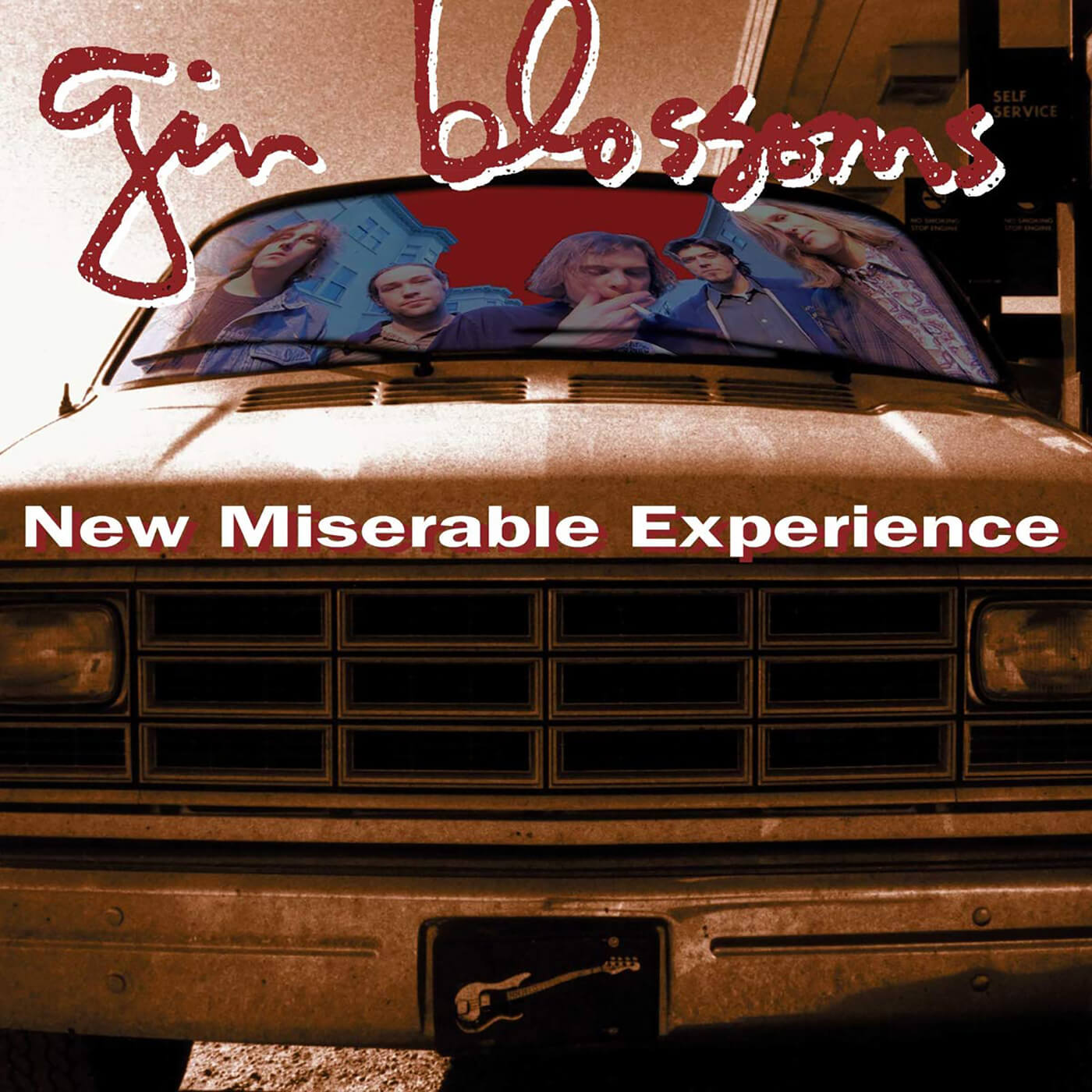 After spluttering to life with the EP Up and Crumbling, tracked in order to shake them out of a creative funk following disastrous sessions with disco titan producer Albhy Galuten, Gin Blossoms headed to Memphis and Ardent Studios, a place inextricably linked with Big Star and power-pop nirvana, to make a new record. Hopkins brought his guitar – usually an orange sunburst Les Paul – and his songs with him, along with a whole load of problems. Things went sideways fast.

Hopkins was apparently so blitzed during the sessions that he sometimes couldn’t, or wouldn’t, play. He tried to escape, D’Andrea reported, but got arrested at the airport for public intoxication. “Most of Doug’s guitar on the album was recorded when we were tracking drums,” producer John Hampton, who had engineered the Replacements’ Pleased to Meet Me at Ardent, later told Magnet.

“He was unable to re-record his parts. Have you ever seen the movie Leaving Las Vegas? Try making a record with someone like that. Maybe it was just the pressure of living up to all the expectations, but this was the opportunity Doug had waited for his entire life, and instead of becoming like Noel Gallagher and assuming a leadership role, he went in completely the other direction.”

The band – or their label, depending on who you believe – took the decision to 86 Hopkins, calling in another Tempe player, Scott Johnson, in the closing stages. “There isn’t a darker scenario to face than losing your leader in the middle of recording, and then having to move on without him and sort of reinvent the band,” Wilson told Phoenix. “There’s no heavier responsibility for a young group.”

Kick out the jams

This experience would leave its own scars, but the sadness found in New Miserable Experience is baked in and almost celebratory – it’s not alt-rock or grunge, it’s pure power-pop. It’s not a product of the trouble the band had making the album, it’s bubbling under all the way through, even if it rarely punctures the surface. The fact that the LP has a breakout single makes the way it maintains momentum and tone all the more impressive – despite its dark heart, the overall impression is of a band kicking out jam after jam after jam, keeping a crowd at Long Wong’s moving.

Crucial to this is the almost telepathic interplay between the guitars, Hopkins and a multi-tasking Valenzuela chopping in and out of rhythm parts as Wilson’s acoustic adds texture. Check out the opening minute of Mrs. Rita, penned by Valenzuela and Jim Swafford, to see this dynamic in full flow: there’s a picked lead that’s straight Dumb and Dumber-core, chord-based jangle, and gently overdriven solos that surge in and out. It sounds like flannel.

When Gin Blossoms slow down a little – see another Hopkins original in the hit Found Out About You – there is something of REM’s Peter Buck in their use of circular chord patterns, while on the other end of the scale the Hopkins-Wilson co-write Hold Me Down rocks in very simple terms. It has a chunkiness and grit that doesn’t appear forced as much as it simply feels like changing gears, and Hopkins is a master of transforming slashing, unruly lines into melodic counterpoints.

What came next was initially just a huge bummer on both sides of the ledger. Hopkins went home to Tempe, drinking, playing in promising bands and skittling through interventions and hospital stays and attempts to get sober. It got ugly financially with the band, too, and there was bad blood and mud-slinging over royalties on New Miserable Experience. The anger hung around, so did the drink and depression. At one point Wilson, on tour with Gin Blossoms, walked into Long Wong’s. “He [Hopkins] came up and cold-cocked me… slugged me in the face, knocked me down. He said, ‘You coattail-riding son of a bitch!’ Right in front of the crowd,” he told D’Andrea at Phoenix.

Gin Blossoms, meanwhile, had a dud on their hands. They returned to the road and, until Hey Jealousy almost improbably hit radio paydirt in California and one of its multiple videos got picked up by MTV, appeared to be going nowhere except the town at the end of their van’s bonnet. A year after it was released, though, the band had a hit song, and New Miserable Experience had more where that came from. Found Out About You became their second Top 40 smash, and the momentum kept rolling. Eventually, the LP went quadruple platinum in the US.

Post-Hopkins, things continued to be fractious at times, and the band’s new songs were more workmanlike. They didn’t have that roguish spirit – Hopkins was more Bob Stinson than Chris Bell, and you can’t replicate that kind of anarchic creativity. He got a gold record for Hey Jealousy shortly before he died, but smashed it. “I don’t think he cared, at that point,” his girlfriend Sara Quijas recalled to D’Andrea. “[Gin Blossoms] were driving away in his car, as he put it.”