The Genius Of… No Pocky For Kitty by Superchunk

The indie-rock icons turned up the pressure and leaned into their pop sensibilities – despite Steve Albini’s teasing. And the result was a remarkable artifact of a band at their potent best.

There has always been a documentary aspect to punk rock – the idea that the 7-inch or fanzine in your hand was proof that a band or scene existed and maybe mattered. In the 1980s that thread was tied around pins on a map of the US, linking together the out of the way hubs that sustained one of the great mass happenings in the history of underground music.

Superchunk’s Laura Ballance and Mac McCaughan know that dynamic better than most after more than three decades at the helm of Merge Records, a label with a back catalogue that might double as a list of indie mile markers in Chapel Hill, North Carolina. For a more immediate, visceral shot of time and place, though, look no further than the rapid-fire recording and release of No Pocky For Kitty in the months immediately before this grassroots network became an all you can eat buffet for major label execs.

The band’s second LP took a cinéma vérité approach to the record-making process, seeking to accurately represent what Superchunk sounded like live between  21 and 23 April 1991. Their condensed studio time, booked amid a nationwide US tour, allowed little room for rumination, and the end result is freewheeling, recklessly enjoyable and exceptional from a melodic standpoint. Between 21 and 23 April 1991, evidence suggests that Superchunk were a very good live band indeed.

The night after playing Chicago’s Czar Bar, Ballance, McCaughan, drummer Chuck Garrison (who’d leave before the LP’s release, to be replaced by long-time sticksman Jon Wurster) and guitarist Jim Wilbur, making his recording bow with the band, turned up at the Chicago Recording Company (previously home to records by Cheap Trick, Styx et al) to record overnight, 6pm to 6am, for three nights with Steve Albini, who was turning the elite-tier facility into a weirdo punk hub in his downtime. The engineer had crossed paths with Superchunk a year earlier in Chapel Hill, where he was running sound for the Jesus Lizard during a tour with Sonic Youth.

“We all liked Steve’s band [Big Black] and the records he’d made with other bands,” McCaughan told Magnet in 2015. “So, we asked Gerard [Cosloy, co-founder of Superchunk’s label, Matador] to put us in touch. We were excited that Steve would do it, and that he had a plan we could afford. We were intimidated, but we were also used to recording quickly. And we knew he was about capturing a band realistically, which fit with our aesthetic at that point.” 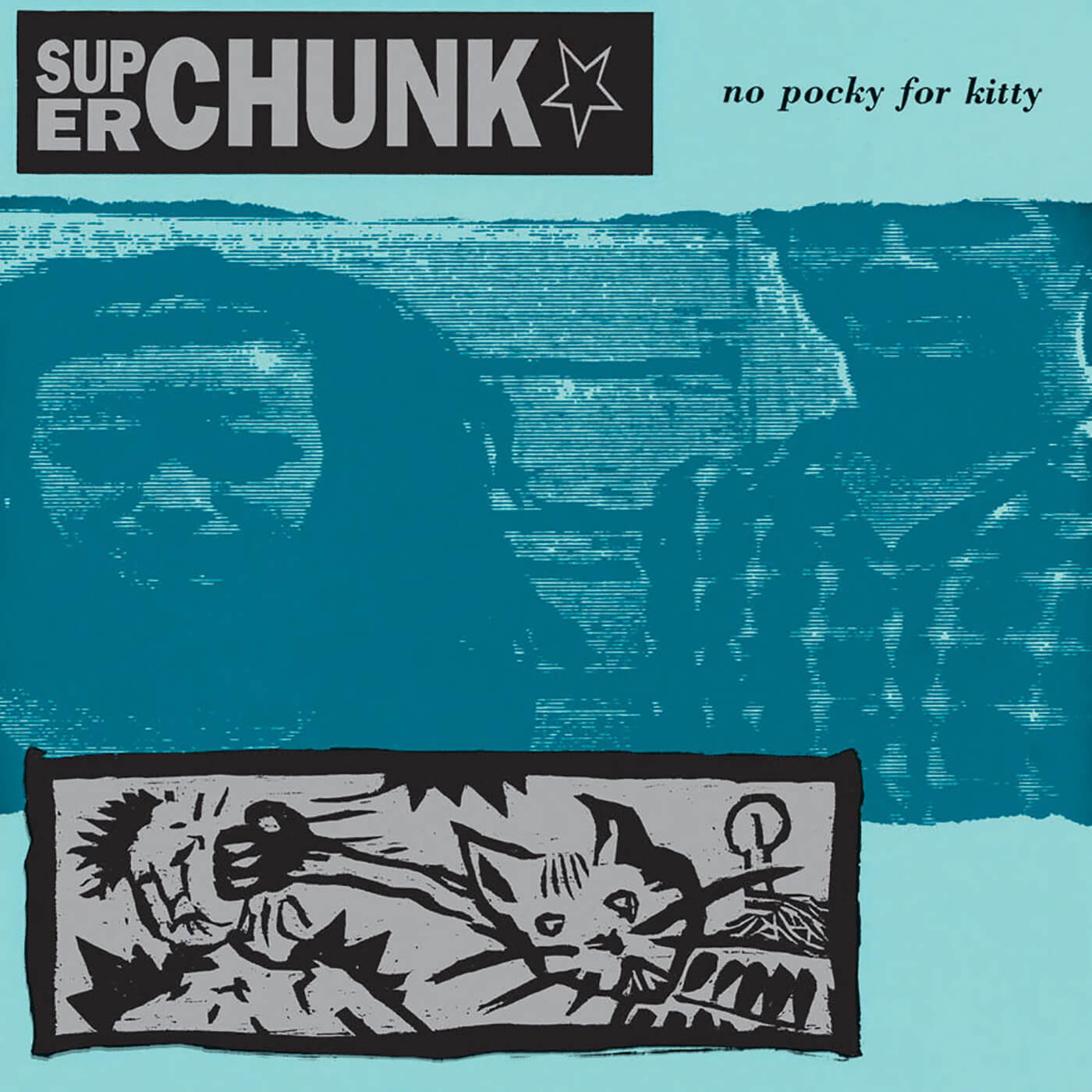 Pop is not a dirty word

In many ways, No Pocky For Kitty is the sound of Superchunk becoming a real band in real time, but in place of growing pains and dead ends we have musicians playing fast and loose but always finding a way to stick the landing. From the opening snare hit of Skip Steps 1 & 3 we’re riding shotgun as McCaughan and Wilbur seek to cram high-wire melodies into the limited space afforded by Albini’s minimalistic approach to overdubbing, jabbing and retreating from McCaughan’s yelped vocals.

These songs were written quickly, their screws tightened in rehearsals and then on the road, and they carry that wet behind the ears vibrancy with them. There are times when it feels like McCaughan is pulling choruses out of the air as they fly by the van window, but the tangle of guitars is more sure of itself than it was on the band’s self-titled debut (where Jack McCook served as second guitarist) even if it feels tossed off and exciting.

Wilbur, a long-time Les Paul guy, and McCaughan, playing a cherry red Melody Maker a few years out from trading it in for his Marauder, are in the early stages of developing their chemistry but they hit on plenty of moments that still fizz and pop all these years later: the wrong-footing delay on the final chord change in Cast Iron’s riff, the melody-countermelody jangle of Throwing Things, the scything Hüsker Dü-esque charge of Punch Me Harder.

Underpinning all of them are pop instincts that Albini mocked in the studio, without leaving much of a mark. “Steve kept saying my leads were like the guy from REO Speedwagon, which was intended as an insult,” McCaughan said in Our Noise. “But I secretly took a small amount of pride in that, because I was a big REO Speedwagon fan when I was 12.”

Superchunk have never made a bad record, but they’ve continually made records that hit differently from the previous one. On the Mouth is their best punk record, Foolish their emotionally raw indie-rock masterpiece, Majesty Shredding their power-pop peak. No Pocky For Kitty, crucially, carries the vitality of a young band realising what they’re capable of under pressure.

Albini’s no frills approach is perfect for these songs, pushing the squalling guitars to the fore and sucking a couple of grams of sugar out of the melodies—its balance of sharp and sweet is spot on, and hugely influential. As usual, though, he skipped his credit on the sleeve. The credits read “produced with eyes closed by Laura, who sat in the right chair” in what feels like an instance of boys’ club assholery. “I felt that was a jab at me,” Ballance told Noisey in 2017. “Clearly, I didn’t produce it. Maybe I was asleep? I don’t know.”

No Pocky For Kitty was released a month after Nirvana’s Nevermind, thrusting Superchunk and the wider Chapel Hill scene into the major label feeding frenzy. Superchunk always resisted the lure. Their Matador deal allowed them to release singles through Merge and after working with them Albini offered an introduction to Corey Rusk and his label, Touch and Go, which seemed like a good fit for producing and distributing Merge releases.

Rusk was into the idea and signed up to work on Tossing Seeds, a compilation of Superchunk’s early singles. They put out something in the region of 10,000 copies, well beyond Merge’s outstretched fingers at that point in time. By 1994 they’d left Matador and released Foolish themselves. They stayed in North Carolina, stayed indie, and on the way ushered Arcade Fire’s Funeral, the Magnetic Fields’ 69 Love Songs, Spoon’s Girls Can Tell and Neutral Milk Hotel’s In The Aeroplane Over The Sea into the world.

“We didn’t over the course of time become different people or start thinking about music in a different way,” McCaughan told me a few years ago in an interview for a magazine that doesn’t exist anymore. “Coming out of punk rock in the late ‘80s, if you grew up in that era you had a developed sense of when something started to seem fake or gross. I don’t know if you are growing up now if that’s as obvious, or maybe people accept it because so much is fake and gross.”