The Genius Of… Paranoid by Black Sabbath

With a 50th anniversary deluxe boxset about to hit the shelves, we look back at the dystopian visions, bludgeoning riffs and satanic myths behind one of the most influential rock albums ever made.

The other side of life

Just four months after the release of their eponymous debut album, recorded in a single 12-hour session, Black Sabbath returned to London’s Regent Sound studio in June 1970 with producer Rodger Bain. They didn’t know it at the time, but the follow-up LP they’d make would be the foundation stone on which the temple of British heavy metal was built.

The timing for the band previously known as Earth couldn’t have been better; nobody had heard a record like Paranoid before. Its lyrical content, primarily from the pen of bassist Geezer Butler, is unremittingly dark, touching on nuclear apocalypse, Vietnam, depression and death, at a time when the end of the 1960s had seen the idealism of the flower power generation come crashing to a halt.

“It was all the ‘flowers in your hair’ and we wanted to sing and play about the other side of life,” said Sabbath’s legendary left-handed guitarist Tony Iommi in documentary film The Last Supper.

With Iommi putting down his Strat and picking up a Gibson SG that he swapped with a right-handed player in a Birmingham car park, and adding a modified Dallas Arbiter Range Master Treble Booster to the mix, the stage was set. Sabbath had perfected the doomy riff-heavy sound previewed on their debut album and conjured a record that would see the Birmingham quartet, along with contemporaries Led Zeppelin and Deep Purple, change the face of British guitar music.

The genre-defining sound of Paranoid owes most to the super-human determination of Iommi, a man who would be a rich source of inspiration for countless heavy-rock players over the next 50 years. Iommi cut his teeth on British guitar greats such as Hank Marvin, Eric Clapton and John Mayall, but his pioneering playing style was forged out of necessity. In an industrial accident that’s become the stuff of rock legend, 17-year-old Iommi, on his last day at work in a sheet metal factory before becoming a full-time musician, severed the tips of his fretting hand’s middle and ring fingers. Told he would never play again, Iommi was spurred on by the story of Django Reinhardt’s recovery from severe burns to his hands suffered in a fire. Iommi fitted Fairy Liquid bottle tops to his fingers and initially used banjo strings before settling on 8-gauge sets for his SG, because they were easier to bend. He would later begin tuning down to C♯, too. In doing so, Iommi inadvertently invented the sludgy, dark sound of British heavy metal, his style full of techniques that became rock staples for years to come – chunky powerchords, rhythmic solidity, pentatonic licks, fluid vibrato and searing unison bends.

“I’d play a load of chords and I’d have to play fifths because I couldn’t play fourths because of my fingers,” Iommi later told Mojo. “That helped me develop my style of playing, bending the strings and hitting the open string at the same time just to make the sound wilder.” 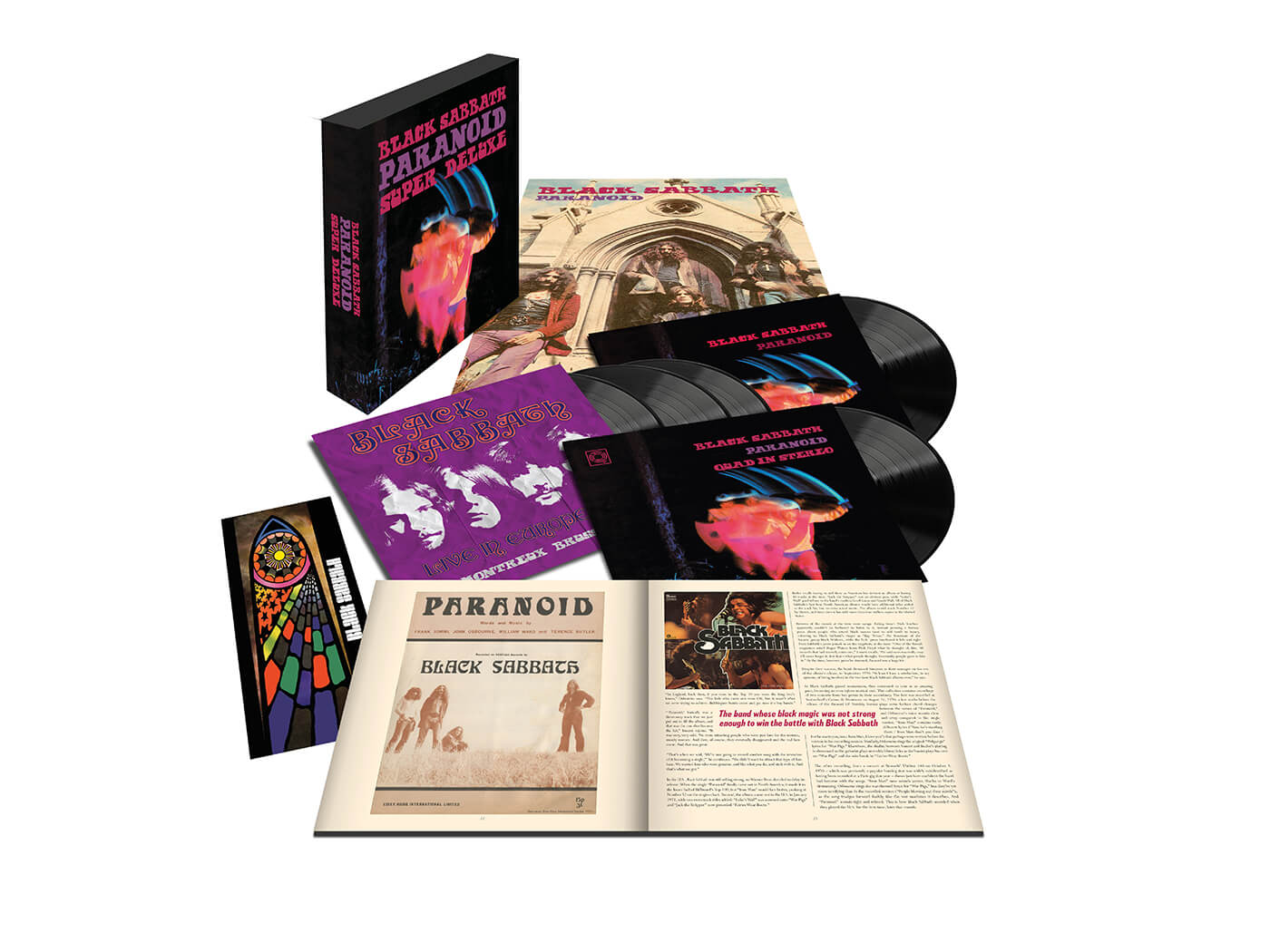 The dark riff lord’s work is all over Paranoid, right from the moment an air raid siren and his plunging bends ominously signal the opening of War Pigs, a song initially called ‘Walpurgis’, but rejected as a title by record company Vertigo for its Satanic overtones. “We changed it to War Pigs, and Geezer came up with these heavy-duty lyrics about death and destruction,” wrote Osbourne in his autobiography I Am Ozzy. “No wonder we never got any chicks at our gigs.”

The title track, the band’s only Top 10 single, was written and recorded in anywhere from 25 minutes to two hours, depending on who you believe, because the band didn’t have enough material to fill an album. Based around Iommi’s sizzling riff, which starts on an E5 powerchord played on the 5th and 6th strings at the 12th fret, it was, Iommi has said, “a bit of nonsense”. Butler had misgivings about including it, because he thought it sounded too much like Led Zeppelin’s Communication Breakdown. The label sensed a hit though, and while the album title was changed from War Pigs, the artwork wasn’t – hence the strange disconnect between cover and title.

Elsewhere, Planet Caravan is briefly incongruous, Iommi’s gentle soloing, a nod to Reinhardt, and Bill Ward’s gentle percussion making for a beatific respite as Osbourne sings through a Leslie speaker. The serenity is swept aside by the curdling Iron Man, with one of the most famous riffs in rock history based around a simple B/D/E powerchord progression. It was originally titled ‘Iron Bloke’, after Osbourne remarked that Iommi’s crushing chords sounded like “a big iron bloke walking around”. The drug-addled horrors of Vietnam are laid bare on Hand Of Doom and Butler predicts a grim, apocalyptic future on Electric Funeral: ‘Robot minds of robot slaves lead them to atomic rage’. Aside from, perhaps, drum-solo vehicle Rat Salad, there’s not a weak song on the album.

Released in October 1970, Paranoid reached No.4 in the UK album chart and No.12 in the US when it was released there the following March. Rolling Stone later named it the best metal album ever made, and it’s sold over 1.6 million copies in the US alone. Not everyone was so effusive. Robert Christgau called the record “bullshit necromancy” and Lester Bangs trashed “inane lyrics that sound like Vanilla Fudge paying doggerel tribute to Aleister Crowley”.

In the encyclopedic All-Time Top 1,000 Albums, Colin Larkin wrote: “Doom, death and destruction are Black Sabbath’s staple diet, which they devour with numbing intensity… Sabbath remain the quintessential heavy metal band.” Allmusic’s Steve Huey concurred, calling Paranoid “one of the greatest and most influential heavy metal albums of all time.”

Paranoid’s legacy is enormous and enduring. You can make a compelling argument that Black Sabbath invented heavy metal, and their influence is audible in everyone from Judas Priest, Nirvana, Slayer, Alice In Chains, Metallica and Slipknot, through to newcomers such as Pigsx7. As Dave Grohl put it: “Almost every band that made it big in the 90s owed a debt to them.”

Black Sabbath’s Paranoid 50th Anniversary Deluxe Edition is out 9 October, a five-LP collection that includes the original album, plus rare Quad Mix along with the vinyl debut of two 1970 concerts.