The Genius Of… Rid of Me by PJ Harvey

Cutting through the ’90s alt mob with mercurial guitar playing, Rid of Me presented PJ Harvey’s musical power at its unrestrained best.

From the autoharp of 2011’s Let England Shake to the haunting piano of 2007’s White Chalk and back to the disorienting frenzy of her debut, Dry, PJ Harvey’s nine-album catalogue is a wellspring of inventive ideas.

While that initial 1992 release was an early indicator of the artist’s insolent originality, as well as her brutal, dynamic guitar approach, it wasn’t until her second LP, 1993’s Rid of Me, that Harvey’s creative guile would be undeniably proven.

While 1992 was the first time the public at large caught wind of her burgeoning talent, PJ Harvey (real name Polly Jean Harvey) already had years of live work behind her at this point, having been a respected musician in various outfits in her youth.

Leaving the Bristol-based Automatic Dlamini – with whom she had played sax, guitar and vocals – Harvey established the PJ Harvey ‘Trio’ with former bandmates Rob Ellis on drums and Ian Oliver on bass (who would later be replaced by Steve Vaughan). Influenced by and incorporating a fusion of styles, Harvey’s early guitar playing darted between electric blues constructs and nimble-fingered folk arpeggios, as well lumbering grunge riffs and rapid-fire, lo-fi indie. At the core of this musical maelstrom, Harvey’s often impassioned vocals emphasised that she was something devastatingly new and necessary in facing down a then male-dominated rock landscape.

Debut Dry wowed the music press, reaching No.11 in the British album charts. Captivating singles Dress and Sheela-Na-Gig razed the established norms of sexual braggadocio in rock music and rearranged the ruins into a compelling new feminist manifesto. In guitar terms, Harvey’s convulsive chordal drives, which often spun on their heels and lunged into chaotic fire pits of distortion, demonstrated a confident command of the instrument. Her coruscating playing style became a hallmark of Dry’s Steve Albini-produced follow-up, released 14 months later. 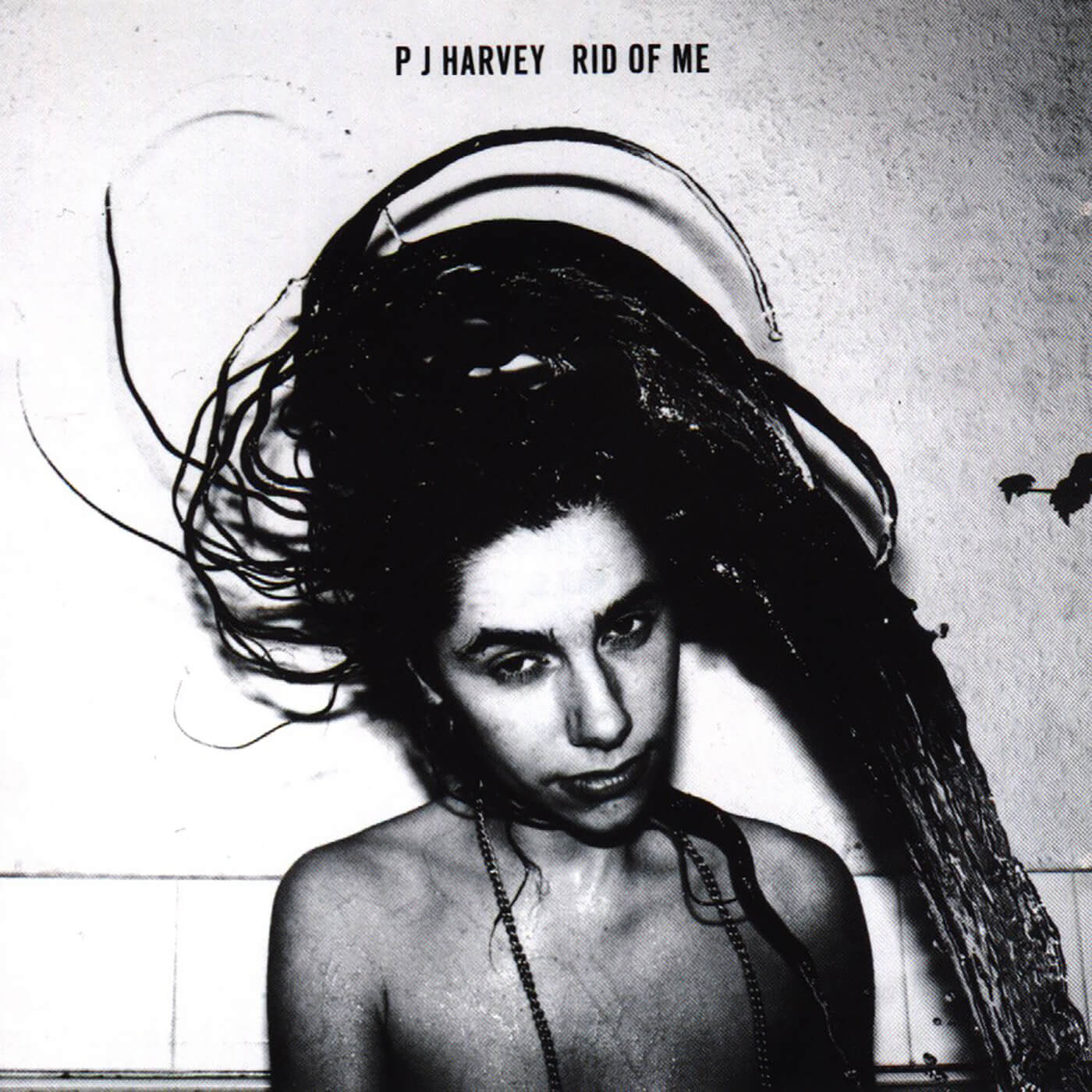 Stars at your feet

Rid of Me’s 14 songs were written during a turbulent time. A period of intense anxiety following relentless touring, as well as the rescinding of Harvey’s place at Central Saint Martins college in London, where she was due to study, saw the artist return to her coastal hometown of Dorset.

This bleak backdrop informed Harvey’s compositions, manifesting as violent anger in songs such as Snake and clawing desperation in the record’s title track. Resignation, too, appeared via the gloomy Am7 arpeggio of Missed and in the agitation of Hook’s pained fusion of warring melodic figures.

But Harvey’s state of mind also led to the assured conviction of 50ft Queenie, powered by her finest riff to date. A simple and effective drop D runaway train of a riff lassoed by a country-ish, quick-fire pull-off (from F), it sets the pace for an irresistible, motoring arrangement within which Harvey decrees herself “number one, second to none”.

Armed with her red Gretsch 7609 Broadkaster and 1960s Fender Telecaster (output through a Vox AC30), Harvey set to work recording her second album alongside Ellis and Vaughan in Steve Albini’s Pachyderm Studios near Minneapolis.

“I knew I wanted to work with Steve Albini from listening to Pixies records, and hearing the sounds he was getting, which were unlike any other sounds that I’d heard on vinyl,” Harvey told Spin. “I really wanted that very bare, very real sound. I knew that it would suit the songs. It’s like touching real objects or feeling the grain of wood. That’s what his sound is like to me. It’s very tangible. You can almost feel the room.”

With Harvey’s vocal and guitar, Vaughan’s bass and Ellis’s drums the only instruments in the mix, the extremes of Harvey’s playing were wrought by Albini to ear-shattering levels.

In making the record with Albini, Harvey further set herself apart from the rock cognoscenti. Ejecting any pretence of doling out traditional song structures or ostentatious solos, PJ instead used feedback, distortion (likely via the ProCo RAT and Boss DS-1, both staples of her pedalboard) and eerie dissonance to emphasise the record’s sunken depths. On the demented Legs, for example, unsettling feedback wafts into the mix in place of where you might typically expect a solo. Meanwhile, jagged tremolo-picked parts zig-zag through the murk.

Another of Rid of Me’s crucial tracks, the indignant gender-leveller Man-Size, is driven by a choppy, wave-like momentum, buffeting between G, F and A powerchords. This thrusting repetition builds tension, occasionally rising to overdriven highs before settling back into its groove, emphasising the circular monotony of its lyrical target.

Rid of Me sounded unlike anything else in 1993. Even today it remains a rollercoaster of often uncomfortable but always engaging sonics, perfect to house Harvey’s sketches of obsession, passion, sexuality, dejection and power. Its white-hot canvases were a major influence on Kurt Cobain. In the discussions that led to Nirvana’s In Utero, Albini presented Rid of Me as an example of a more raw-edged approach to recording guitar. Cobain was entranced. The dislocated sonics of Nirvana’s final LP were unmistakably informed by Rid of Me.

Trying to cause a riot

While Harvey’s later work may have brought her wider attention – and provided a less abrasive way-in for listeners – the savage thrill-ride of Rid of Me remains her most electrifying listen. Armed with just her guitar, a small ensemble and merciless determination, Rid of Me’s 14 tracks reconstituted Harvey’s hardships into resolute, growling proclamations.

“I had just come out of my teens and at that time you really want to make your mark on the world,” Harvey told Spin. “So I just wanted to say something that hadn’t been said in that way before. I was trying to cause a riot in one way or another”.