The Genius Of… Slanted and Enchanted by Pavement

Pavement’s pointedly shabby debut was an aural mess of dishevelled guitar noise, balanced by infectious hooks and a homemade aesthetic which set the indie-rock mould.

“Pop music catches on like a meme. It just takes a little bit of tinder, and it can become a phenomenon.” Pavement’s Stephen Malkmus astutely reflected in 2018. In the same interview (with Esquire) the then 52-year-old indie-rock godfather revealed that he was always keeping an ear to the ground, dissecting the modern pop charts mathematically to try to unpick its ever-changing, winning formula.

Little wonder that Malkmus is keen to decode the mechanics of success, his band’s unanticipated rise to the pinnacle of indie rock primacy some 27 years before wasn’t achieved via heavy major label promotion or deft chart-chasing, but by a conscious upturning of listener expectations. His breezy attitude to the recording process – and life in general – became central to Pavement’s slacker-rock appeal.

In 1991, the 24-year-old Malkmus was nervously putting the finishing touches to his band’s debut full-length album. Capturing the ramshackle sound of three young men pushing at the limits of listener tolerance, Slanted and Enchanted’s 14 tracks might have been intended as a wry 90s update of Stephen’s post-punk influences (The Fall and My Bloody Valentine in particular), but, through a combination of unkempt, dissonant chord structures, tangled, grubby riffs, tuneful, vibrant melodies and coolly delivered (but earnestly intelligent) lyrics, Slanted and Enchanted was a felicitous moment-seizer. And one which prescribed the DIY ethos of independent music for decades to come.

Formed by high school friends Malkmus and Scott Kannberg (aka Spiral Stairs) in Stockton, California, the pair’s initial ideas (aside from having fun playing local open-mic nights) was that they would experiment with freeform musical expression, and write material that evaded the howling anguish of the then on-the-rise grunge scene, or the pomposity of stadium rock. Malkmus and Kannberg were middle-class, suburban kids – and that’s what they wanted their own music to reflect. “Whatever soul you have being a suburban kid like us, what can you do that’s right that way?” Malkmus explained to MOJO in 1999, “Because we’re not Black Sabbath, we’re not working-class heroes and we can’t get away with that. Luckily we’re not hanging out at Met Bar, either, we’re not New York City hipsters or anything, so that’s our earthiness.”

Freeing themselves from the pressure of trying to be something they weren’t, the duo’s early sound fizzed with raw elements that would soon come to enthral the local indie scene. Early tracks such as the spritely jog of the heartbroken Box Elder or the ominous, angular spikiness of She Believes revealed Malkmus and Kannberg’s predilection for using their guitars as a diverse musical paintbrush. Complementing, and competing, with each other.

These songs, along with three others, were recorded at future drummer Gary Young’s ‘Louder Than You Think’ home studio in one four-hour session. The resulting first EP, Slay Tracks: 1933-1969, pulsed with Malkmus and Kannberg’s noise guitar, purposefully captured in tinny, near-transistor-radio quality (this was stressed by the wash of radio noise on EP opener You’re Killing Me. Pavement’s homespun production aesthetic was born. “When I first heard them, I did not understand it.” Young reflected in an interview with Vice in 2015, “I’d tell my friends in New York I just made this weird record and I don’t really know how to describe it.”

This gloriously sloppy debut EP was a riveting listen, organically shifting between furious squalls of guitar, and shaky arrangements that were barely able to stand, before decaying into abstract expressions of fury. Occasionally bolstered by an eccentric (and often improvised) rhythms – a result of Young’s spontaneous decision to leap behind the drumkit during the sessions. Another crucial ingredient in the developing stew, was Malkmus’s vocal delivery, which veered from a sardonic, idle cool, to a hormonal wail across the EPs run time.

Just 1,000 copies of Slay Tracks… were pressed, and released to surrounding independent stores by Kannberg’s self-run label Treble Kicker. This very first Pavement release was soon recognised as a word-of-mouth, underground gem by indie rock scribes and attentive devotees of their local Stockton scene. It was enough to pique the interest of Chicago-based Dan Koretzky, who was in the process of founding his own label Drag City. Recognising Pavement’s potential, he promptly signed the outfit, and two further EPs quickly followed.

Across Demolition Pilot J7 and Perfect Sound Forever Malkmus and Kannberg were given space to develop their sonic universe. At this point, Gary Young joined the Pavement ship full-time – squaring off competition from their then live drummer Jason Turner. 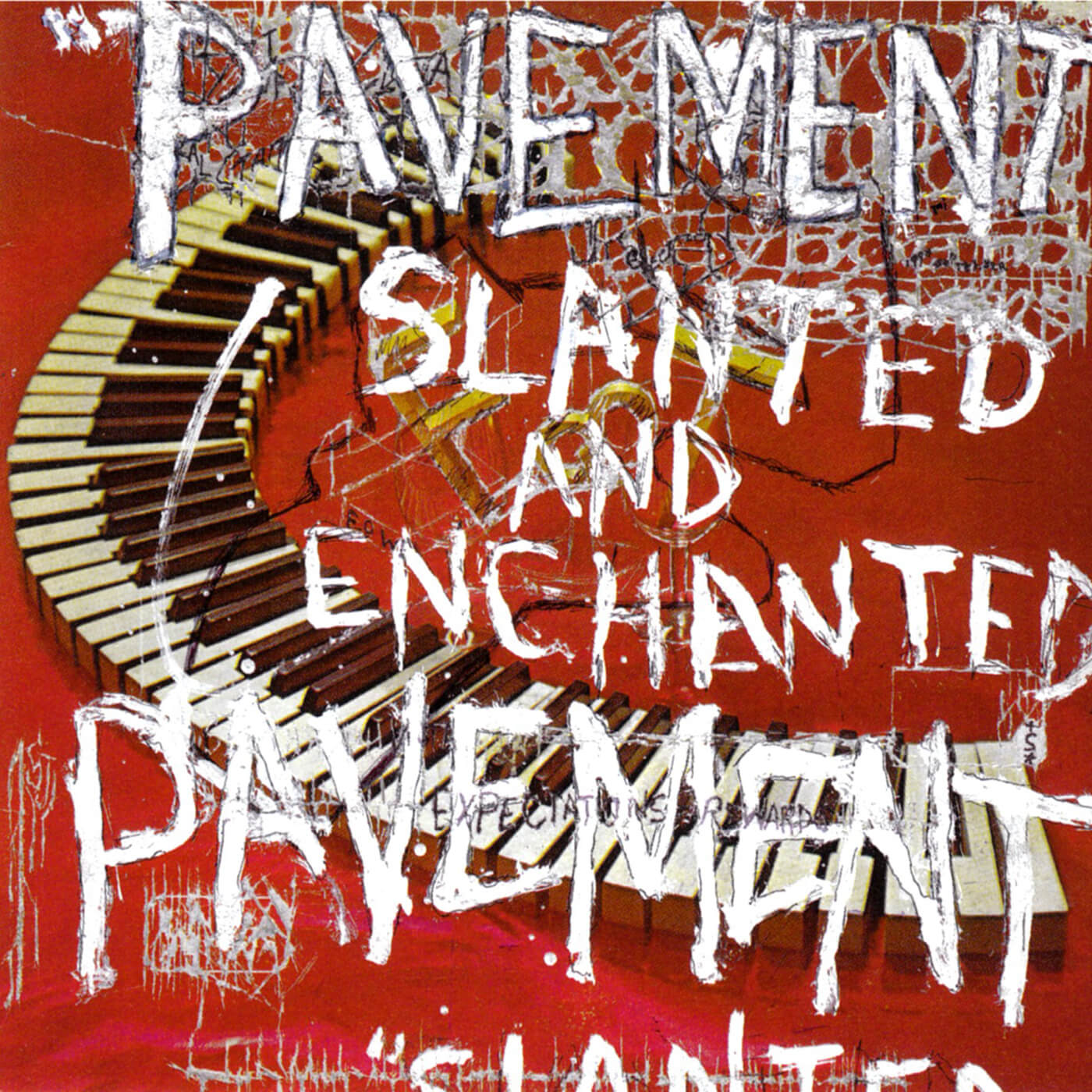 Now with an ardent backbone of disciples (largely off the back of their often mesmerizingly chaotic live performances) the band resolved to lock down a full length debut album. Returning to Young’s studio, the trio stuck to the same ethos that had defined the subterranean appeal of their initial EPs.

Enraptured by the potential of alternate tunings, Malkmus refined his dabblings with open-G and open-D into some stable, characteristic tunings. Of particular note was his CGDGBE tuning, which shaped the wavering harshness of In The Mouth a Desert, Loretta’s Scars and Jackals, False Grails: The Lonesome Era. The second ubiquitous tuning was in DADABE – responsible for the atmosphere of  Perfume-V, Summer Babe and Conduit For Sale! among others. These tunings have now become generally regarded as ‘slacker’ tuning, as a result of their heavy use through the record. “We didn’t have a bass guitar on the early recordings.” Malkmus told Guitar World, “So tuning down gave us a lower sound but also a fullness to the sound. That’s where I started. Then I simplified even more by bringing my G string up to A. I did a lot of things like that.”

Malkmus and Kannberg’s rigs were uncomplicated, and regularly tweaked during the Slanted and Enchanted sessions. Though he’d later be a renowned Jazzmaster-wielder, at this stage a Fender Strat was Stephen’s primary sonic paintbrush, while Kannberg would use (and share) a Fender Mustang and Gibson SG, running through very minimal pedal rigs. Both their signals were ably muddied up by a pair of ProCo Turbo Rat distortion pedals (and the occasional use of a Boss DS-1 distortion).

While Scott’s sound was output through a Fender Silverface Twin Reverb, Malkmus often chose to run through a small boutique Epiphone amp, borrowed from his friend’s father.  Following the aversion to bass on the band’s first three EPs, Kannberg took up the low-end mantle, adding a propulsive low-end to Summer Babe with an actual bass, while some tracks continued to feature de-tuned guitars filling in the the low-register space (Fame Throwa for example), others remained entirely bass-free (Here)

Across fourteen tracks, the band wove a varied tonal tapestry, which careered from the fast-paced, thrash punk of tracks like Loretta’s Scars, rumbling detonations of intense guitar (Trigger Cut) and quieter, more reflective pieces, such as sublime tearjerker Here – a restrained cut that demonstrated the band’s growing melodic competence.
The wiry pulse of opener Summer Babe (a song that had previously been released as a single) was a glorious entry point to the album, Malkmus’s chaotic guitar whelping in agitation at the joyful serenity of the lyrics. This tension is ultimately resolved by its memorable title-repeating hook. Though uninhibited experimentation was central to Pavement, the bubbling pop hooks that flowed throughout the record’s run-time served to anchor the ears. The dissonant chords which shape the captivating In The Mouth a Desert lead us into a fine example, as growling distortion hovers over the verse, snakey hooks periodically rise to have their moment in the sun, before receding into a wash of sound.

Taking just under ten days to complete, the recording sessions were treated with a characteristically relaxed, minimal take approach. Once twenty tracks were recorded, Malkmus embarked on a leisurely international holiday, while Kannberg whittled down the results, and concocted a working album running order – and attempted to get the album heard.

Aiming for wider (but still uncompromised and independent) exposure, the band reached out to Matador Records in New York. “I was living in New York and wanted to be on a New York label, it was easy for me to go into the offices.” Malkmus recounted in Rob Jovanovic’s Perfect Sound Forever: The Story of Pavement. Impressed, Matador agreed to put out the record, though it would take a gulf of fifteen months before Slanted and Enchanted saw the light of day, finally hitting shelves on April 20th 1992.

In the post-Nevermind landscape of 1992, the charts had found themselves suddenly welcoming of a more polished version of alternative music. Slanted and Enchanted’s crumbling arrangements and lo-fi production value meant it wasn’t aiming to compete in that domain. But, for the indie rock congregation, the record served as the most cogent rejection of those perceived compromises which had allowed select alt-rock artists a way-in to the arena of wider public acceptance.

As a defiant, homemade piece of work, Slanted and Enchanted helped cement the idea of rock music as art for art’s sake. In the UK, the record’s status was raised as a result of notable deification by revered trendsetter John Peel – and public derision by an irked Mark E. Smith, who deplored the band’s on-the-sleeve The Fall influence by saying “It’s just The Fall in 1985, isn’t it? They haven’t got an original idea in their heads.” Nevertheless, this high-profile attention helped the record shift a respectable 100,000 copies by 1992’s end.

In his retrospective review for Pitchfork, Chris Ott summed up the record’s importance “Slanted and Enchanted fortified and refocused the tired, exploited underground reeling from Nirvana’s co-option. It showed us that regardless of the suits and ties invading our world, there was plenty of room to operate beneath the mainstream radar.” Rolling Stone would go on to class it as “The quintessential indie rock album”.

Thought Pavement would adopt new members, and develop a more concise indie-rock sound (best exemplified by their 1994 anthem, Cut Your Hair) their debut’s ramshackle influence heavily lingered throughout the following decades, as the mainstream began to assimilate more and more indie acts into the fold. Just listen to Graham Coxon’s semi-improvised, untempered guitar parts on Blur’s Coffee and TV, or those half-formed arrangements that dominate the second half of The Libertines’ self-titled album. There’s also Modest Mouse’s more chaotic, free-flowing outbursts and even Animal Collective’s stream-of-consciousness lyrical delivery, all of which are knowingly doffing their cap to Pavement’s values.

Stephen Malkmus’s stature as the epitome of the 90’s ‘slacker’ generation is now a firm part of pop cultural legend, celebrated by 90s influenced young artists like Courtney Barnett and Beabadoobee – born after Pavement’s 1999 split –  who penned the overt dedication, I Wish I Was Stephen Malkmus.

Reflecting on the debut last year, Malkmus was typically low-fuss about its legacy, “Slanted and Enchanted was like our coming out party. We could finally tell our parents, ‘Mom, I’m in a band and it’s going to be okay.’ I was living in Brooklyn, or maybe Jersey City, and I went back home to Stockton, California, for Christmas break, and I just kind of bashed out the songs.” He said, to guitarplayer.com, “I’m grateful that people liked it. It saved my life from working in bars.”