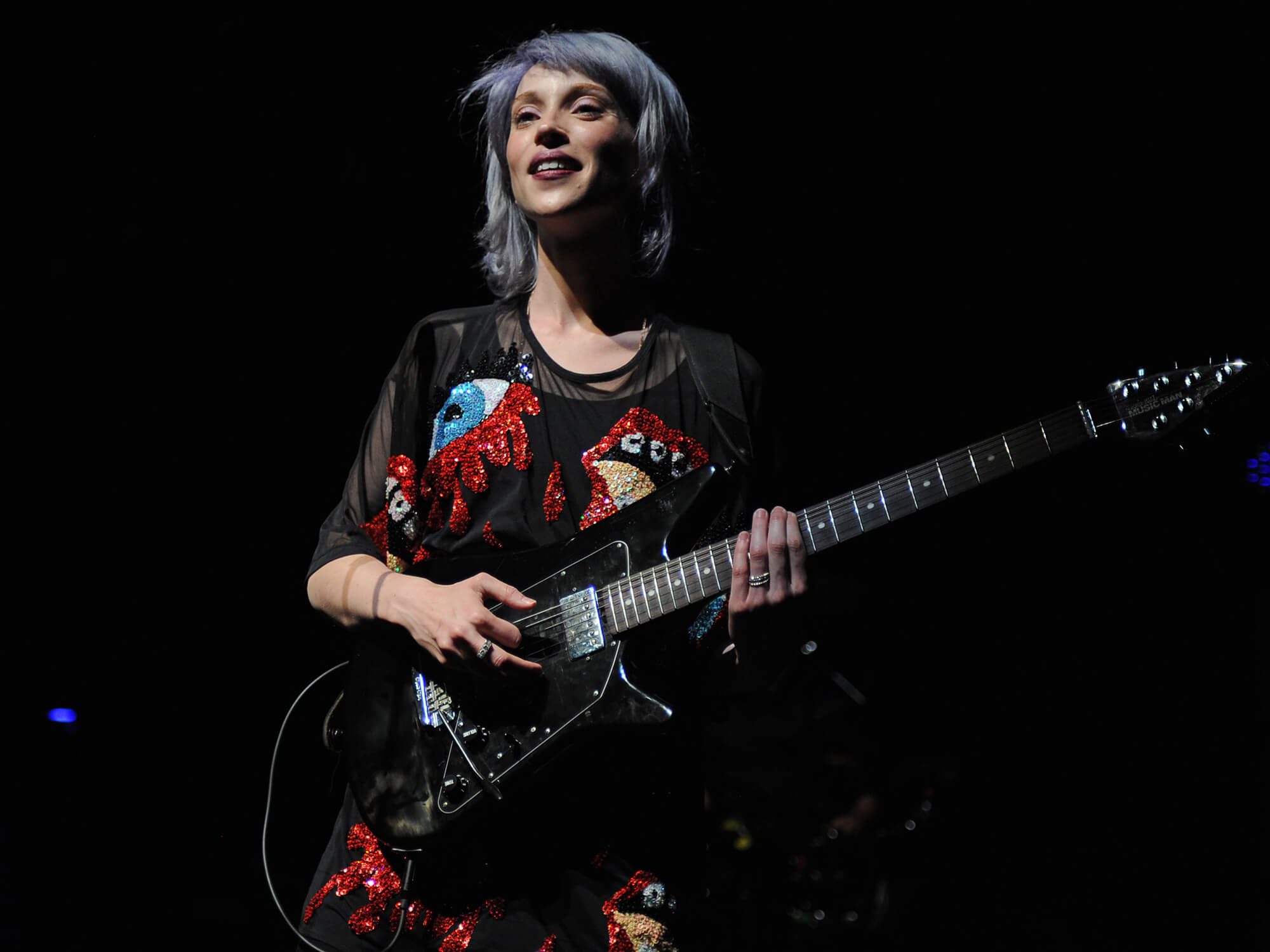 On her sublimely crafted fourth record, St Vincent cemented herself as both high-profile musical titan, and a singularly inventive guitarist.

One of the most expressive guitar wielders of the modern era, St Vincent’s metamorphosis from relatively obscure multi-instrumentalist songwriter into bona fide guitar icon (complete with modern-classic Music Man signature guitar) has been nothing short of extraordinary. On her latest move, 2021’s Daddy’s Home St Vincent (aka Annie Clark) took a conscious step away from the technicolour post-modern pop of her 2017 global smash hit Masseduction, incorporating a 70s rock and funk aesthetic.

But Clark’s major breakthrough came with 2014’s self-titled, Grammy-scooping fourth album, released shortly after a notable collaboration with David Byrne significantly raised her profile. Largely written when touring with Byrne for the brass-band incorporating Love This Giant project, the bones of the album that would push St Vincent into the public consciousness were gradually assembled. “I wanted to make an audio scrapbook of where I’d been, just so that it felt even more real.” Annie told The Skinny, “I had a year’s worth of nights out, and people I’d met, and places I’d been, which I wanted to synthesise.”

Enlisting her trusted producer John Congleton, the St Vincent record was tracked and engineered at Elmwood Studios in Dallas. Congleton had first encountered and befriended Clark when she was filling the guitarist role with the Polyphonic Spree, and had overseen her prior two records Actor and Strange Mercy. The pair had established a firm creative relationship. When he heard Clark’s initial Garageband-sketches for album number #4, it was clear that her songwriting and musical fortitude had considerably strengthened, in-step with her audience-size. “By the time we were making that record, there was obviously an audience and we were aware of that. But it didn’t really change the process too much” John told Consequence of Sound of the six-month recording process.

Underpinned by restrained and compressed rhythms, opener Rattlesnake built into a tidal wave of noise. An arc-like, hyper-fuzzed solo swooped in with an unnatural and rich sustain. It was this painterly application of guitar, slithering itself through a broader mix landscape that also included synth, processed vocals and throbbing beats, that came to define large swathes of St Vincent. 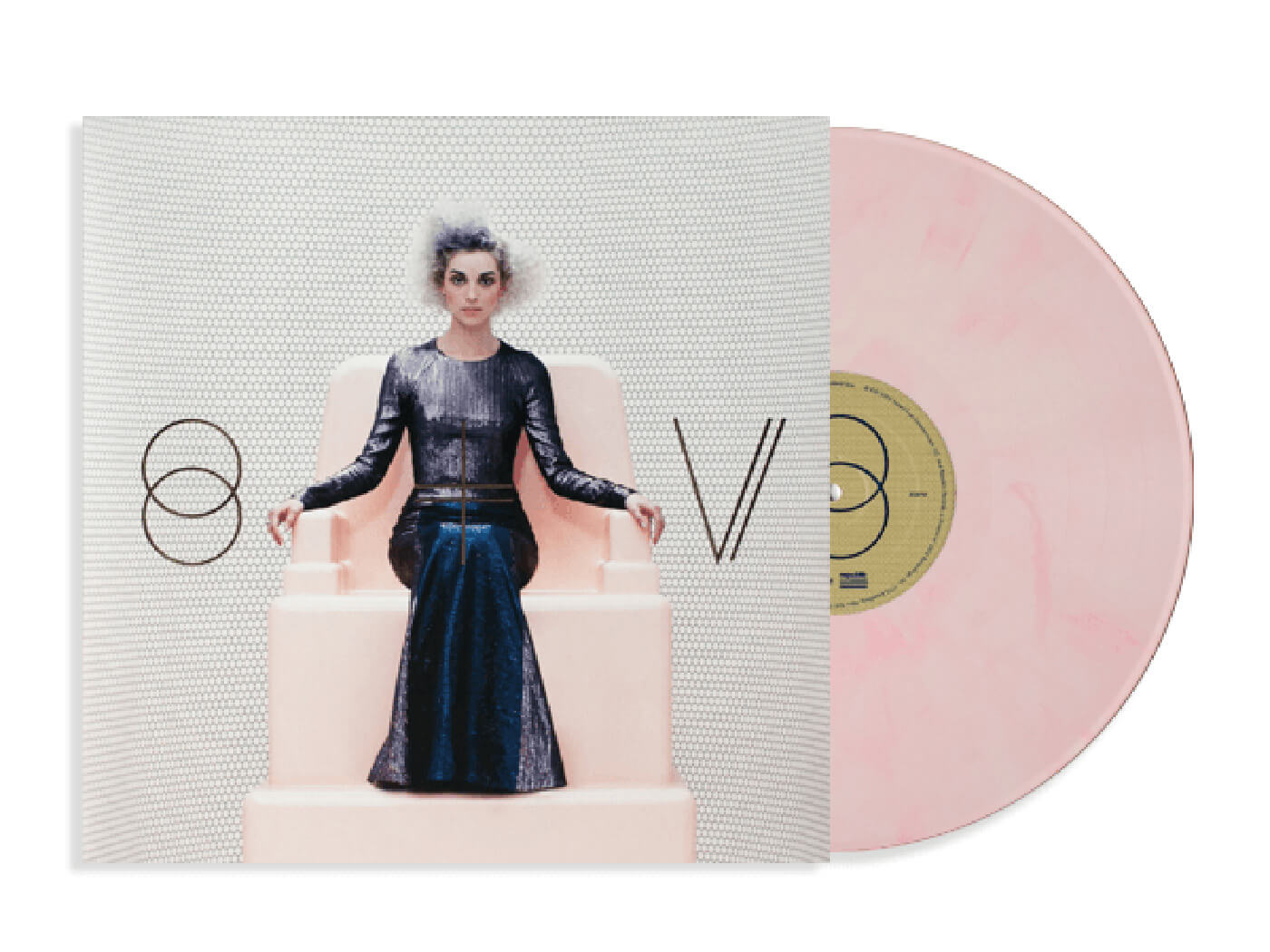 Further gems included the brilliantly infectious, modern-age savaging single Digital Witness, the more conventional power-chord drive of Regret and the shimmering beauty of Huey Newton, a track which hard-swung from its icier verse into a brutish riff-oriented piece.

Annie’s guitar of choice on this record was a special Thurston Moore edition Fender Jazzmaster, owned by Congleton. The simplicity of the instrument’s single volume knob suited Clark, who was trying to avoid getting bogged down with too many permutations. Much like the Sonic Youth pioneer, Clark typically avoided open E tuning. “I use a lot of alternate tunings. I never play in standard E. I drop everything down a whole step, so it’s D G C F A D. That just ends up being better for my voice.” Annie told Guitar World “For songs like Regret and Birth in Reverse I was playing around with some tunings that had multiple strings tuned to the same note”

While the Rattlesnake solo is the first evidence of Clark’s characteristic scene-stealing ultra-sustained fuzz tone, the guitar takes on a number of different sonic personas across the album’s forty minute runtime. There’s the lo-fi, post-punk angularity of Birth in Reverse, with its jerky rising and falling motif. There’s the subtle emotional prickles that underpin I Prefer Your Love and then there’s the cyclic repetition of Every Tear Disappears’ core riff, which also sports some effective octave shifts. Fixated with the effect that the onrush of modern technology – particularly the internet – was having on the human psyche, St Vincent ably reflected its theme via its aural merger of human and machine.

In her quest to paint her guitar tones with more primary colours, a selection of key pedals were incorporated into her chain. For that indelible sustain, Annie harnessed the Electro-Harmonix Micro Synthesizer – re-shaping her guitar tone to mirror the glitchy electronic intensity of an angry analogue synth. For more conventional distortion, the Bixonix Expandora EXP-2000R was brought out of John Congleton’s pedal cupboard (Clark would later purchase her own). A pair of Eventide H9 Harmonizer multi-effects units provided extra sonic scope, but effects are only half of the story…

Much of St Vincent’s distinctive guitar character came from her extraordinary play style, which incorporated furious high-speed runs, hitting behind the neck, a penchant for wiry, single string riff-writing and deploying convention-breaking harmonics.

Released to overwhelming critical acclaim, and scooping the Grammy Award for Best Alternative Music Album, St Vincent wasn’t just Clark’s mainstream watershed, it also proved that she was a singularly eloquent and creative guitar player. Just two years later, this was further spotlighted by the release of the Ernie Ball Music Man St Vincent HHH guitar. Based on the Albert Lee HH model that she used on the resulting tour for the record, the distinctive, African Mahogany/Rosewood model was designed by Clark herself, becoming the first female artist to design her own line of guitars for the mass market from the ground up. Rarely seen without this tailor-made model, St Vincent continues to cut a captivating silhouette as one of the 21st century’s bona-fide guitar heroines.