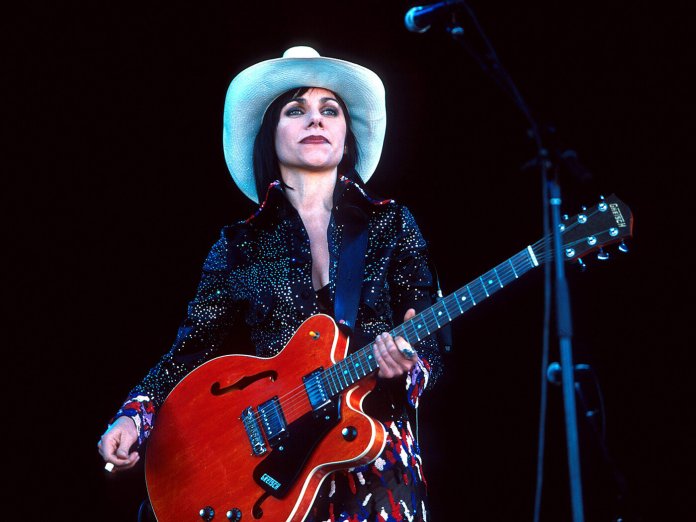 Stories From The City, Stories From The Sea is often characterised as Harvey’s ‘pop’ album. True, it’s certainly bolder and brighter than the preceding and somewhat muted Is This Desire? (1998) or than the gothic chanteuse vibes of To Bring You My Love (1995), which brought comparisons to Nick Cave with whom she would soon collaborate on Murder Ballads.

But the follow-up to the Stories… album, Uh Huh Her (2004) was a completely solo-played album recorded on 4- and 8-track at home, and different again… as was 2007’s piano-driven White Chalk (2007). In truth, it’s difficult to pinpoint what Harvey’s ‘norm’ really is. She’s endlessly changing, which is one of the reasons she’s perpetually fascinating.

There’s certainly no suggestion Harvey was ‘coerced’ into making a shiny pop record by her label, Island. True, To Bring You My Love had seen her break out as a ‘pop’ star, a frontwoman who would perform live without her trusty guitar and subsequently wowed a new audience while dressed in a vivid red ballgown or a fuchsia catsuit and fake lashes. But that was no third-party-led contrivance either. It was just Harvey playing, again, with her own persona.

One-time Captain Beefheart and Tom Waits guitarist Joe Gore, who was enlisted for the previous To Bring You My Love, reckons that “every album has a theme” and that “Polly is like Tom Waits. An auteur in the classic sense. One time, Tom was talking about another artist and he said ‘it sounds like she’s taking her songs to the hairdresser and the make-up artist.’ He was saying that it was the producer that was giving their songs the style and the artist was relying on somebody else to find the gestalt of the project. It’s not like that with Polly. She knows what she wants.”

Previous producer Steve Albini, ‘recorder’ of Nirvana’s In Utero and Harvey’s own Rid Of Me, concurs. “Polly is not someone who leave the details to other people. She’s immediately involved in the sound quality decisions.”

So the pop moves of Stories From The City… were her own doing, no question. It was only later she admitted she wasn’t entirely comfortable with her own judgement. “I felt like I got lost around that record,” she later told Mojo. “I wanted to try writing lots of perfect pop songs. It’s great to set oneself projects, but they also have to ring true to your heart and soul. Pop music isn’t where my heart is at.”

Outside the discomfort zone

All this is relative, of course. This may have been “pop” for Polly, but compared to Oops!… I Did It Again, the defining female pop album of 2000 by Britney Spears, it most certainly wasn’t. Indeed, it’s actually a very simple record, with big bold melodies and minimal personnel – Polly Jean on guitar and vocals, Rob Ellis on keys and drums, and the Bad Seeds’ Mick Harvey on organ, bass, and drums. All three co-produced, and there’s a notable flash of superstar glitz in guest vocals by Radiohead’s Thom Yorke. And how ‘pop’, anyway, is a song like Kamikaze? Not very.

The title itself alluded to the songs’ creative birth: half written between Europe, London and her home in Dorset; the remainder were penned in New York, where Harvey lived for seven months prior to recording. With the cover picturing a gold-handbagged Harvey (sunglasses on: at night, natch) amid NYC’s neon streets, one might surmise big city glamour was reflected in the whole project, but that’s not strictly true either. Her time there may have informed a share of the songs (yet most of those songs are about escaping), and it was recorded in six weeks at the genteel English setting of the 17th-century Great Linford Manor recording studios, the nearest metropolis being the totally un-rock’n’roll Milton Keynes. At a push for hell-raisin’ cred, you can claim Marshall make amps down the road at Bletchley. 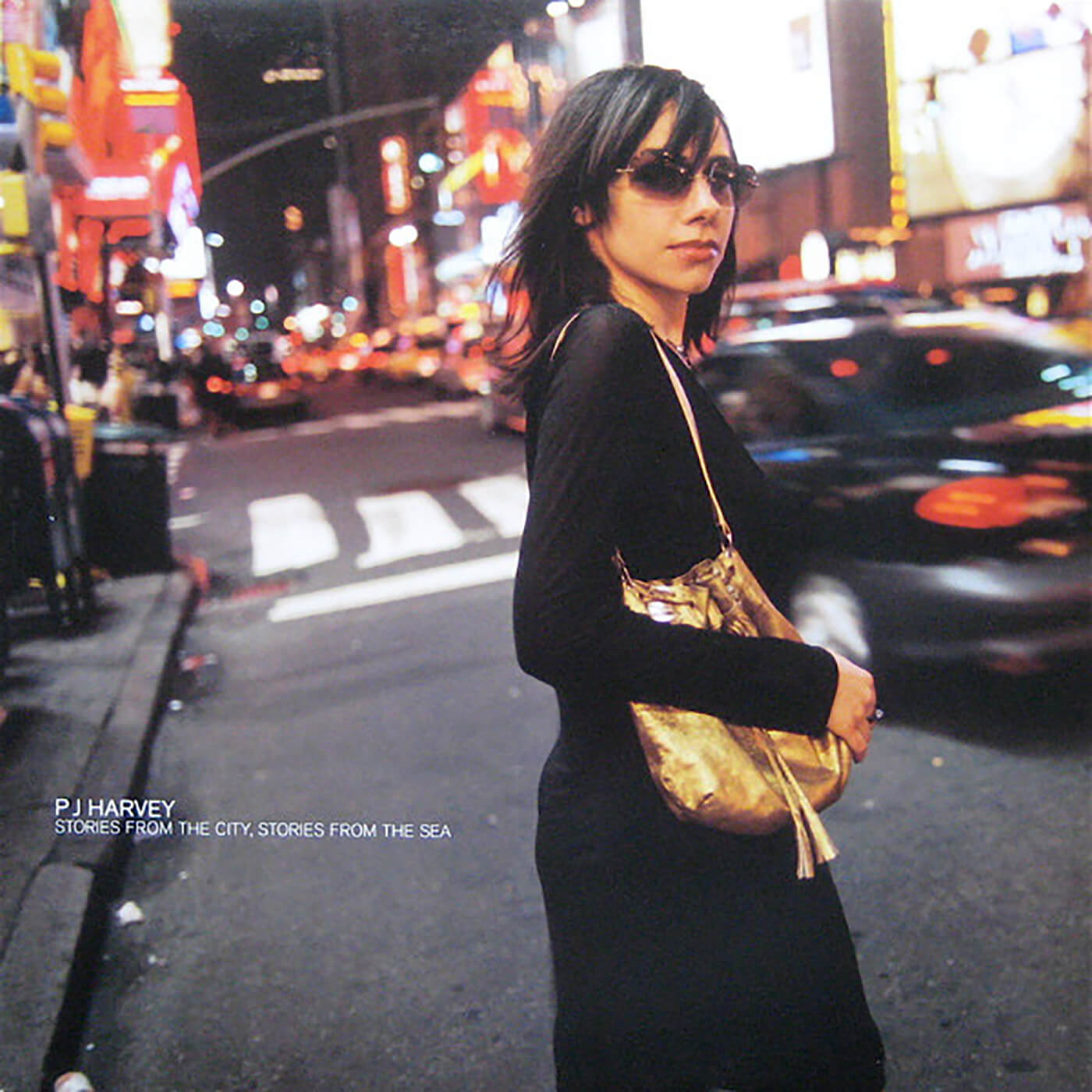 “I wanted everything to sound as beautiful as possible,” Polly once said of the album’s sonics. “Having experimented with some dreadful sounds on Is This Desire? and To Bring You My Love – I was really looking for dark, unsettling, nauseous-making sounds – Stories From The City… was the reaction. I thought, No, I want absolute beauty. I want this album to sing and fly and be full of reverb and lush layers of melody. I want it to be my beautiful, sumptuous, lovely piece of work.”

And it was. Of all PJ Harvey’s album’s Stories From The City, Stories From The Sea is perhaps the most instrumentally vivid. And her voice has rarely sounded more elastic. It kicks hard from the off. Opener Big Exit (“too many cops / too many guns!”) is clearly informed by life in the USA, and its clear-as-a-bell G-F-G-F riff grips like a choke-hold. It’s sparse, though. It’s only when the bass kicks in (defining a Dm) than any chordal identity really takes hold. The Whores Hustle And The Hustlers Whore is cut from similar rags, being a harsh-riffing disapproving stare onto the urban underbelly that seems to prompt flight not fight.

That ‘escape’ can be found in the overtly romantic A Place Called Home (“One day there’ll be a place for us / And the bells keep ringing… / and the girl keeps singing”). Meanwhile, This Is Love is downright dumb-sex lusty. Over a great deep fuzz riff, it doesn’t pretend to be anything more than a paean to happiness-in-sex. This, it should be said, is a good thing. Good Fortune is another “exit” song in which “I fantasize of our leaving / Like some modern-day gypsy landslide / Like some modern-day Bonnie and Clyde”. If all these songs were written in New York, it doesn’t sound like she much fancied anything more than a temporary visit.

Harvey’s guitar playing doesn’t often garner attention, but it’s to the fore on Stories… and not amid the grungeoid blast of her earlier records, bar the exception of hidden track This Wicked Tongue. A big part of Stories… was the bell-like tones of her 60s Gibson Firebird, though she still plugged into the 335-alike Gretsch Broadkaster used on her early records. She also used a rosewood board Fender Telecaster, like collaborator John Parish. Her amps are trusty classics: various Marshalls, Fenders, Mesa-Boogie, Vox AC-30s… Great Linford Manor would have had its own anyway.

What is clearer on Stories… is her sense of rhythm: it’s all based around her voice and seems to adjust accordingly. And at times she’s got a lovely touch of dynamics: witness the waltzing melody of You Said Something, or the delayed partial stabs in The Whores Hustle And The Hustlers Whore. She credits long-time mentor John Parish with much: she played guitar in his own band Bristol band Automatic Dlamini from 1988 to 1991, before her talents became too evident to serve as a mere sidekick. But she admits, “He used to tell me how to play things on that level – exactly how much emphasis I should put on a note, how I should move from one note to another.” 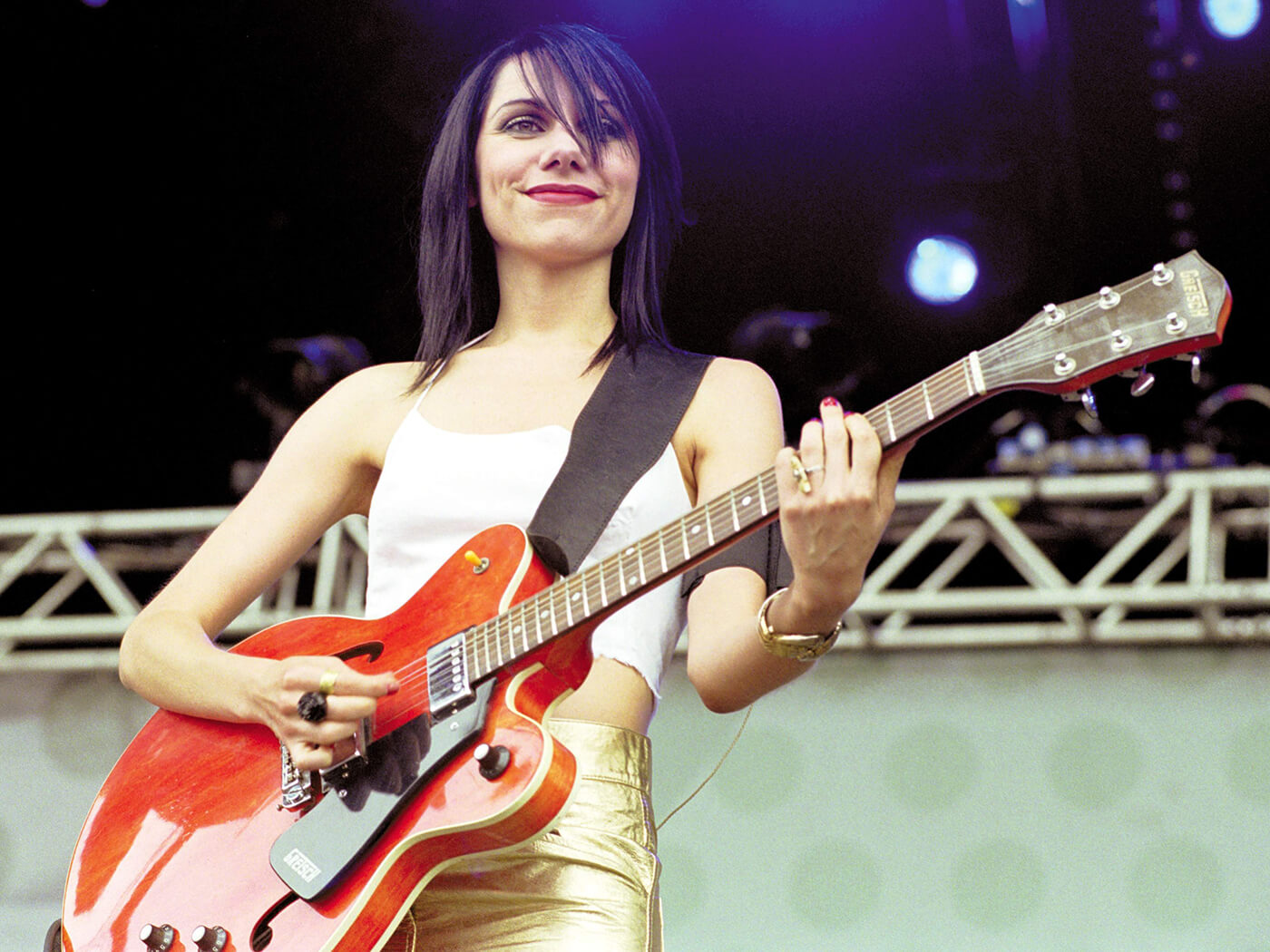 It’s perhaps no surprise that Thom Yorke ended up being on a PJ Harvey album. The two emerged as forces in the same year, 1994, and ending up writing to each other as well as inevitably socialising on the gigging circuit. Yorke’s presence on Stories… certainly served a few headlines, and possibly even some succour to Radiohead fans reeling from the same year’s almost guitar-less Kid A. Although the main track they work together on, The Mess We’re In, isn’t much of a collaboration at all. Harvey wrote it all for two characters, and told Thom to sing his designated part. As is her wont.

“I’d long been interested in the idea of somebody else singing a whole song on a record of mine, to have a very different dimension brought in by somebody else’s voice,” she explained. “It adds so much dynamic within the record to have this other character coming in. I get tired of my own voice. It’s nice to hear somebody else’s.”

“People are often saying that, ‘It’s a return to your roots,’ or whatever, which I don’t see it as,” Harvey told the LA Times on the album’s release. “It’s very different musically to the first couple of albums. It’s very melodic, and it’s much rounder and fuller. The earlier albums were very black and white in some sense, very extreme. Melodically, this is much more sophisticated than those records. It kind of feels like a combination of every album I’ve made so far rolled into one.”

And in that sense, Stories From The City, Stories From The Sea is a perfect introduction to the wonders of PJ Harvey. She has on occasion sounded somewhat dismissive of it, but can we not go against the artist’s own judgement, once in a while? Yes, we can.

It’s accessible, dare we say ‘commercial sounding’, but also highlights her own unique guitar playing and finely-honed sense of composition in a simple format. Not everyone likes it, of course. The credder-than-thou taste-makers of Pitchfork labelled it “tepid” and guilty of “style over substance” but that’s to miss the point of its position to Harvey’s overall career arc. If she spent her whole career writing songs about twisted relationships as on Dry, one would probably fear for her wellbeing. Stories… is thankfully happier than that.

It was a hit, understandably, becoming her first Platinum album in her homeland. Uh Huh Her eventually sold better in the USA, but you could argue Stories… did the groundwork. The album also won the Mercury Music Prize, and with 2011’s Let England Shake repeating the feat, Harvey’s the only artist to ever won this critics’ hi-five twice. Not bad, for something that supposedly wasn’t her forte. 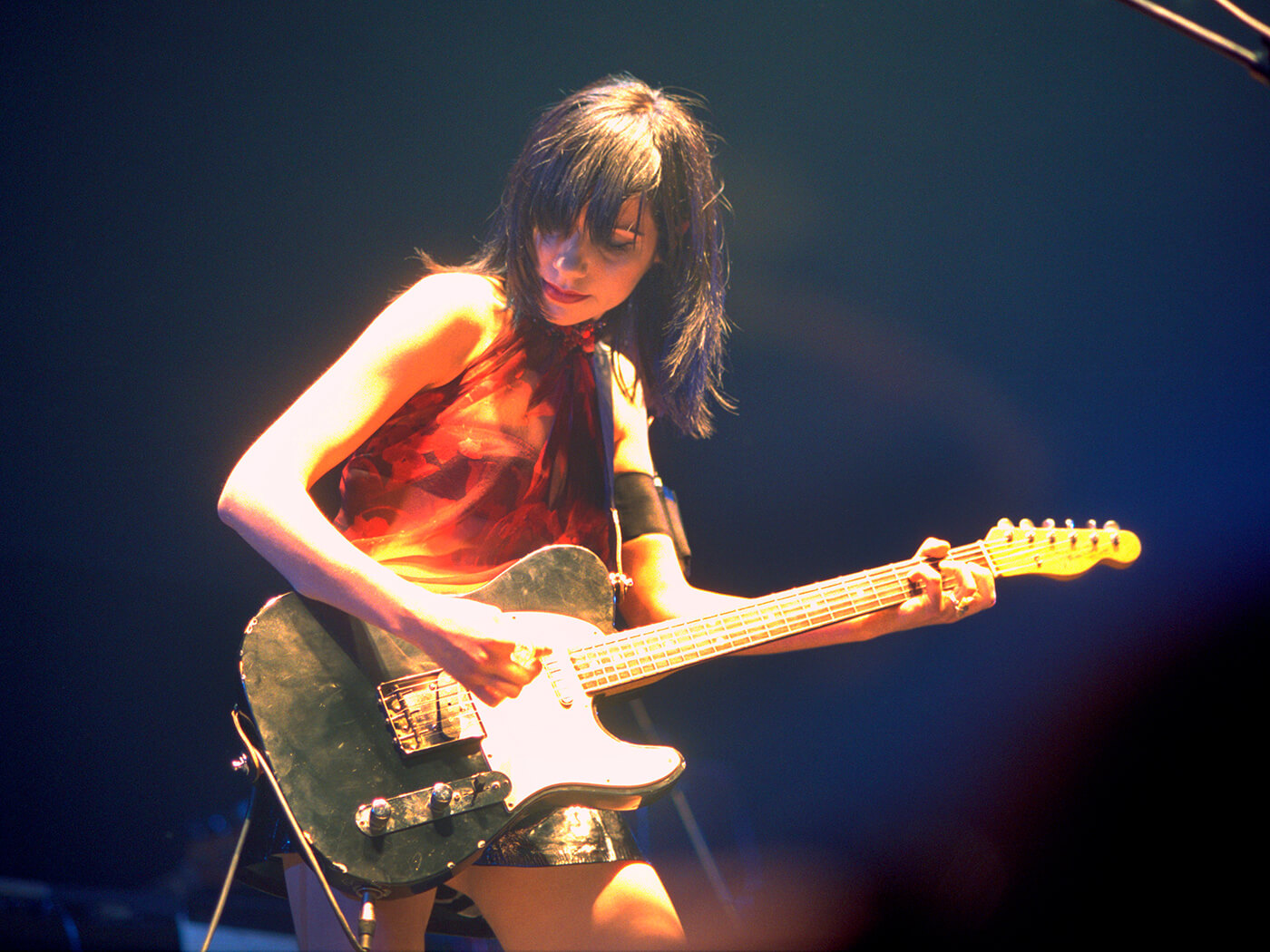 The Whores Hustle And The Hustlers Whore