The unstoppable eddies of surf rock permeated pop in the 1960s, and its reverb drenched, tremolo-picked sound all stemmed from one man. Dick Dale’s bewildering guitar work defines his, still jaw-dropping, debut LP.

It’s just possible that we might have been guilty, one or two times in our history, of being too hasty in labelling guitar players of yesteryear as ‘pioneering’. While it’s true that the story of popular music is a tale of constant inspiration, and cue-taking from forward-thinking experimenters, it does seem that terms like ‘influential’ or ‘groundbreaking’ are all too frequently called upon (and not just by us, mind) that the true meaning of those terms, when applied to those genuine innovators, is diluted.

The reason we’re emphasising this at the outset, is because Dick Dale’s astonishing abilities, highly distinctive sound and eardrum-shattering volume had an overwhelming impact on electric guitar players the world over. Though, many of whom weren’t even aware of the man himself. Despite a short recording career, Dale’s often-overlooked impact on the instrument set off a chain reaction of influence that continues to this day.

The significance of Dick Dale’s revolutionary approach to the instrument – in both performance and technological terms – ignited much of what we love about the sound of our favourite instrument. Beginning as a spur-wearing rockabilly act, Dale’s completely idiosyncratic way of holding his instrument and fretting notes coupled with a fortuitous partnership with guitar manufacturing supremo Leo Fender. This would result in the birth of the energised drive of surf rock, and a more front-and-centre role for the guitar in general.

“I’m not a guitar player. I don’t know what an augmented ninth or thirteenth is” Said the 72 year old Dick Dale in an interview with The Intertia. “I don’t give a shit. I make my guitar scream with pain or pleasure, and that’s what it does.” Dale’s rejection of musical orthodoxy is perhaps why even today, mesmerizingly modern-sounding guitar outbursts like Misirlou Twist and Let’s Go Trippin’ still have the power to enthral.

But, Dale hadn’t embarked on his musical career to try and redefine anything. Born Richard Monsour in 1937 to a Polish mother and a Lebanese father, the music-obsessed youngster had a keen interest in the cultural and musical traditions of both his parents. Though he studied piano at age nine, and loved playing the tabaraki, it was the guitar that he eventually gravitated towards. Being left-handed, Dick held a standard right-handed instrument upside down, and didn’t re-string (so his heavy E string was at the bottom of the instrument). This unusual way of handling the instrument, as well as his interest in incorporating more Arabic forms of melodic construction, similar to the ones he’d naturally grown up listening to by virtue of his family heritage, were key to his unconventional development.

We also have Dale’s father to thank for encouraging his young son to take up live performance; “My father tricked me into being on stage. He wanted to see how tough I was.” Dick told Alibi, “He had this friend of mine join up with a talent show. He told me my friend was going to play the guitar too, so there would be two of us. I didn’t want to do that, but I got up on stage anyway. [The other kid] ran off the stage to see if I’d panic, but I didn’t. I don’t back down from anything in my life. I won the contest.”

After moving to El Sugundo, California with his family in 1954, the teenage Dale became completely enraptured with both surfing and the youth culture that had sprang up around this most American of pastimes. When not chasing waves, the young musician began establishing a name for himself as a country-tinged rockabilly in local bars (and had re-christened himself as the cowboy-ish ‘Dick Dale’). It wasn’t long until Dale’s love of surfing started manifesting itself in his songwriting, and, crucially, his guitar playing. 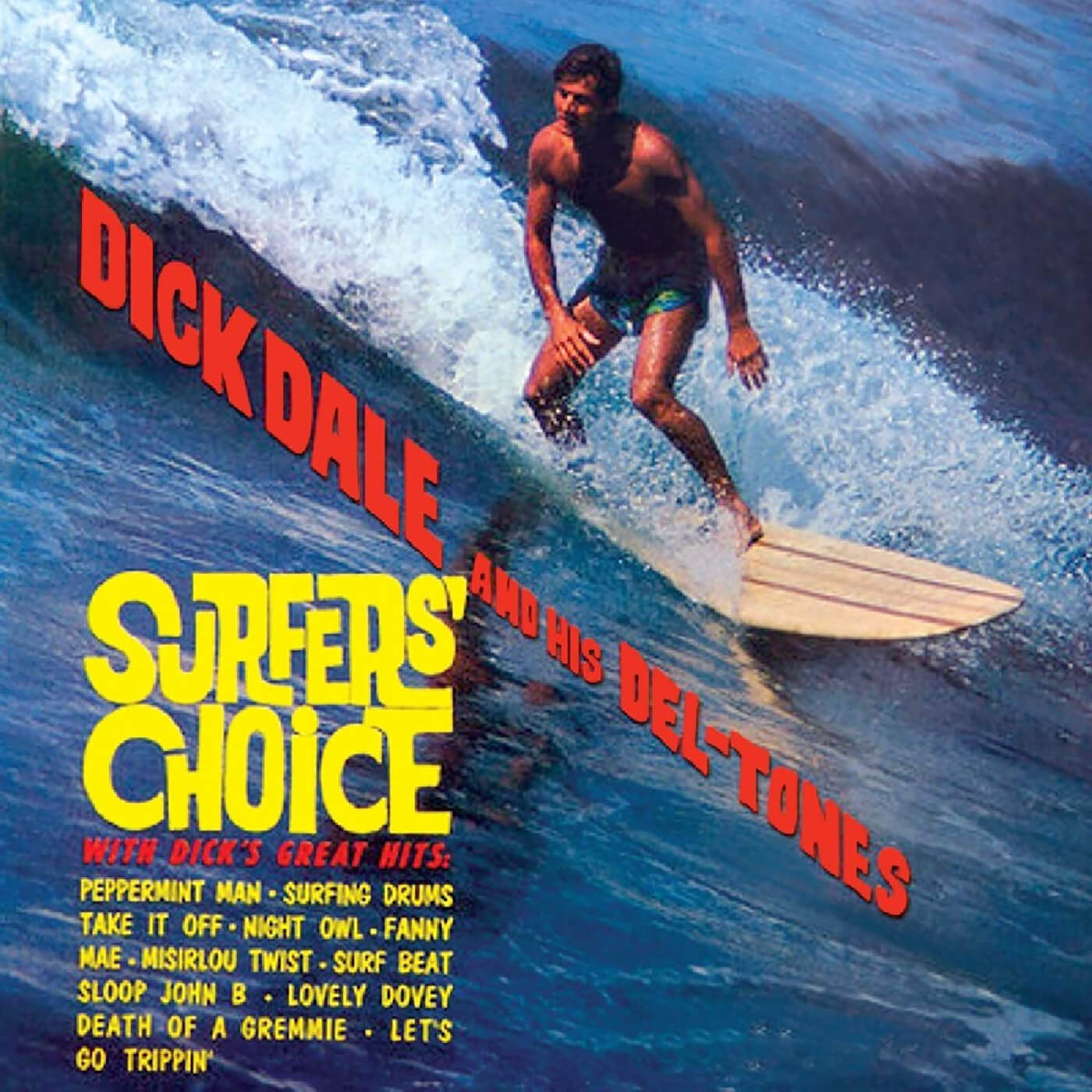 Dale’s new original sound would eventually be dubbed surf rock – a guitar-oriented style of music that sonically intends to conjure the rushing surge of waves via a propulsive forward momentum and a spacious, ocean-sized reverb. It was also very, very danceable. Dale made sure that his instrumental cuts such as Surf Beat and Surfing Drums were rooted in a relentless pulse, with snaking single-note riffs that glide across the arrangement like the musical equivalent of a speedo-wearing hunk. Amassing a small cabal of fellow musicians (dubbed, the Del-Tones) Dick Dale’s local success – as the originator of the latest musical craze – exploded.

Dale’s hip congregation would gather at Balboa, California’s 3,000 capacity Rendezvous Ballroom to shimmy and snorkel dance to the band’s deafeningly loud sound. The band played at such volume that at various performances, the amplifiers blew. Thankfully an old friend could help him with that.

Leo Fender had met Dick Dale at a young age when, as a determined youngster, Dale had introduced himself to the guitar-building legend. “When I first met him I said ‘my name’s Dick Dale and I’ve got no money and no instruments, can you help me?’ Leo looked at me and said ‘take this guitar, and play it’. That was a Strat, it had only been out for a year.” Dale recollected to Creative Worx. Fender and Dale remained in contact as the years had progressed, with Dale’s signature left-handed Stratocaster – dubbed ’The Beast’ a personal gift to the former resourceless lad, now taking Southern California by storm.

Upon hearing of Dale’s amp-blowing woes, Leo provided him with some prototype high-wattage new amps, stating “When it can withstand the barrage of punishment from Dick Dale, then it is fit for the human consumption!” After decimating fifty such amps, Dale and Fender eventually struck gold with the 85-watt Fender Showman. This collaboration with JBL sported six preamp tubes and a humongous closed-back cab. Thusly, they could be cranked up to just the ear-splitting level that Dale and his throng craved.

The incorporation of Fender’s new reverb unit quickly became another facet of Dale’s sound. Dale used the effect creatively to make his guitar sound seem at times cavernous, imposing, haunting and liquid. Very few others were able to reproduce this studio production effect in a live context, but Dale showed the world how to use reverb – and the very notion of a stompable signal chain effect –  as a sonic plaything.

King of the surf guitar

The best document of this period is Dale’s 1962 debut LP, Surfer’s Choice. The album, partly recorded live at the Rendezvous Ballroom, is largely considered surf rock’s year zero. Aside from the thrilling intensity of the performances captured here, the album provides undeniable evidence of Dale’s matchless guitar playing abilities. Of particular note is Dale’s frenetic tremolo picked riffs which assuredly slide across the fretboard. Their implacable, drilling sound is the result of the extremely heavy plectrums he used, along with thick-gauge strings.

Examples abound on Surfer’s Choice, though the most well-known is the high-octane Misirlou Twist. Based on an old Greek song that dated back to the days of the Ottoman Empire, Dale’s version was founded on an arrangement that his uncle performed to him as a child, with its overt hook being a blazing one-note riff.  Dale told The Guitar; “I realised I could possibly play Misirlou… on one string. After plucking out the melody, it sounded a bit boring. I thought, wait a minute, I’ve got to play it with a Gene Krupa (jazz drummer)-style rhythm.”

Dale’s arrangement, navigating the double harmonic major scale (also known as the ‘Byzantine’ scale), would become globally beloved three decades later, when it was used as the theme music of Quentin Tarantino’s Pulp Fiction. “Having Misirlou as your opening credits is just so intense.” The eccentric director explained in the liner notes of his soundtrack collection, The Tarantino Connection “It’s so loud and blearing at you. A gauntlet is thrown down that the movie has to live up to; it’s like saying ‘We’re big!’.”

As Tarantino’s comment attests to, Dale’s fingers generated some spellbinding tracks. Dale’s unrelenting tremolo picking technique was further demonstrated on the jagged wobble of Take it Off and the wondrous Shake ’N’ Stomp. These two tracks both leap octave waves, swerve unexpectedly and maintain an assured balance – akin to a surfer hanging loose out in the big blue. While the album does contain some tamer, conventional fare, such as Dale’s take on Sloop John B and Alonzo Willis’ Peppermint Man, the LPs overriding blows are made by Dale’s electrifying riff-dominated work, which must have been truly provocative for contemporary listeners. They’d almost certainly not heard anything like this before.

The album’s closing number is also its most pivotal. Let’s Go Trippin’ had been released as a single the previous year, and had been regarded as Dale’s signature cut, sending the Rendezvous into a craze whenever Dale elected to perform the buoyant instrumental. Though rooted in a simple jazz progression in E Major, Dale’s irresistible high register leads evoke the incandescent golden sands of a California beach. Its mythical status would inform The Beach Boys (who covered it, in 1963) and Jan & Dean.

Following the release of Surfer’s Choice, Dale released four more LPs, though the ‘surf rock’ niche had subsequently grown into a more radio friendly variant that added layered vocals to proceedings (as popularised by The Beach Boys). Sadly, Dale’s career was put on hold due to a diagnosis of colorectal cancer in the mid-sixties which he was able to overcome. After years out of the limelight, Dale returned to the stage in the 1980s and continued performing right up until his death in 2019.

Despite the relatively small window of time when Dale’s star was at its brightest, his influence on guitar playing was indubitably seismic. The first notable player to actively push for technology which could match his volume level, reverb and musical ambitions, Dick Dale established the all-important link between player and technology, conjuring his pulse-quickening sound from his then-state of the art rig. The ferocious intensity of his playing did much to set the guitar hero mold. It foreshadowed both the overdriven heaviness of electric blues, and the rapid movement of heavy metal.

Upon his death in 2019, Dale’s significance was finally acknowledged outside of the worlds of the numerous high profile guitar players he had influenced. “His was a transportive sound: it just felt like the ocean. wrote Pitchfork, summing up Dale’s life and work. While The Guardian aptly described his attitude to his instrument – “He may well have been the first person to realise the electric guitar could be used not merely as a melodic instrument, but a bludgeon.”

For Dick Dale, playing the guitar was not about fitting into some established orthodoxy, but using it as a tool to carve out the sounds that he alone had conceived. Dale’s single-minded drive to up the ante of the guitar, and for it to take a front-and-centre role was an ideal his inspired devotees would push even further. Namely, noted Dale aficionado, Jimi Hendrix.

Without Dale, it’s very likely that the guitar’s evolution – and how we think about the instrument in a performative context – would have been quite different. Dick Dale’s attitude underscores that our modern notions of the guitar’s ‘rules’ were all established by people who elected to try something different, and push beyond what was then acceptable. Or, as Dale told Alibi “Walk your own path, no matter what people say to you.”