The Genius Of… Up the Bracket by The Libertines

Tipping the balance of the garage-rock revival back towards the UK, The Libertines’ debut still sports the essence of Britain’s punk and indie heritage

Twenty years ago, Up the Bracket lit the spark that saw Britain go up in a blaze of skinny jeans and leather jackets, with similarly minded indie acts flourishing alongside The Libertines throughout the 2000s.

Back in 2002, though, the Camden kings’ Anglo-leaning ethos set them apart from a set then spearheaded by The Strokes, one of most exciting new bands on the planet. The Libertines were nipping at the heels of Britpop’s heaviest hitters, ready to seize the torch from Oasis. They were fresh, determined and spoke to an unbridled hedonism that helped them earn the loyalty of their tribe. With their romantic veneration of Britain’s rock and literary canon, Pete Doherty, Carl Barât, John Hassall and Gary Powell were primed to become the country’s next obsession.

Marrying the blunt fury of The Clash with the poeticism of The Smiths, and the nicotine-stained thrill of early Suede with the pissed-at-the-piano rockney knees-ups of Chas & Dave, The Libertines were radically out of step with 2002’s musical landscape. Up the Bracket landed a year after The Strokes’ debut Is This It, which cemented the New York act as the most effortlessly cool on the scene. This was the Libertines’ response: with The Clash’s co-architect Mick Jones helming their debut (and Suede’s Bernard Butler producing the band’s non-album singles), Doherty, Barât and co were positioning themselves as the successors to the UK’s hallowed indie lineage.

Clocking in at just over half an hour, Up the Bracket hit like a hurricane. Recorded mainly live, Barât and Doherty’s fuzz-soaked, galloping guitars ran roughshod over Hassall and Powell’s solid rhythm section. Throughout the album’s 12 tracks, the Libs’ leading lyricists painted a warring picture of twin dimensions of Britain. Their songs were set amid vomit-soaked pubs and featured street-stalking debt collectors, hotel room hook-ups, and ride-or-die debauchery. Barât and Doherty also conjured visions of a long-lost, half-dreamed, mythical Albion, particularly on their penultimate manifesto The Good Old Days.

Purposefully lo-fi, Barât and Doherty’s wilfully imprecise approach to guitar masked their true ability. Typically toting a Gibson Melody Maker (or SG), Barât’s penchant for seemingly spontaneous but actually well-mapped solos and riffs resulted in some of the record’s fiercest guitar work. Just listen to the white-knuckle closer I Get Along. Meanwhile, Doherty, then rarely seen without his Epiphone Coronet, demonstrated a remarkable aptitude for songcraft that underpins every minute of Up the Bracket.

Though the barbed wire riffage of Vertigo is an effective starting point, it’s on the album’s second track, Death on the Stairs, that the clearest indication of The Libertines’ musical and emotional breadth can be found. Built around a swerving chord sequence, Barât’s jibing A♯ riff keeps pace with the arrangement, as he and Doherty exchange lead vocals. The only let-up comes during the chorus section’s sublime six-note motif.

On the heels of the unrelenting Horror Show, the magisterial Time for Heroes bursts out of the speakers with punchy Smiths-esque chords, lurching from a bright D major to a troubled F♯m to a six-beat, punctuated G. The song’s intensity builds with each successive verse before it erupts with Barât’s frenzied solo. Yes, their exterior was rickety but any band that could pen a song as vital as Time for Heroes had to be worth your commitment. 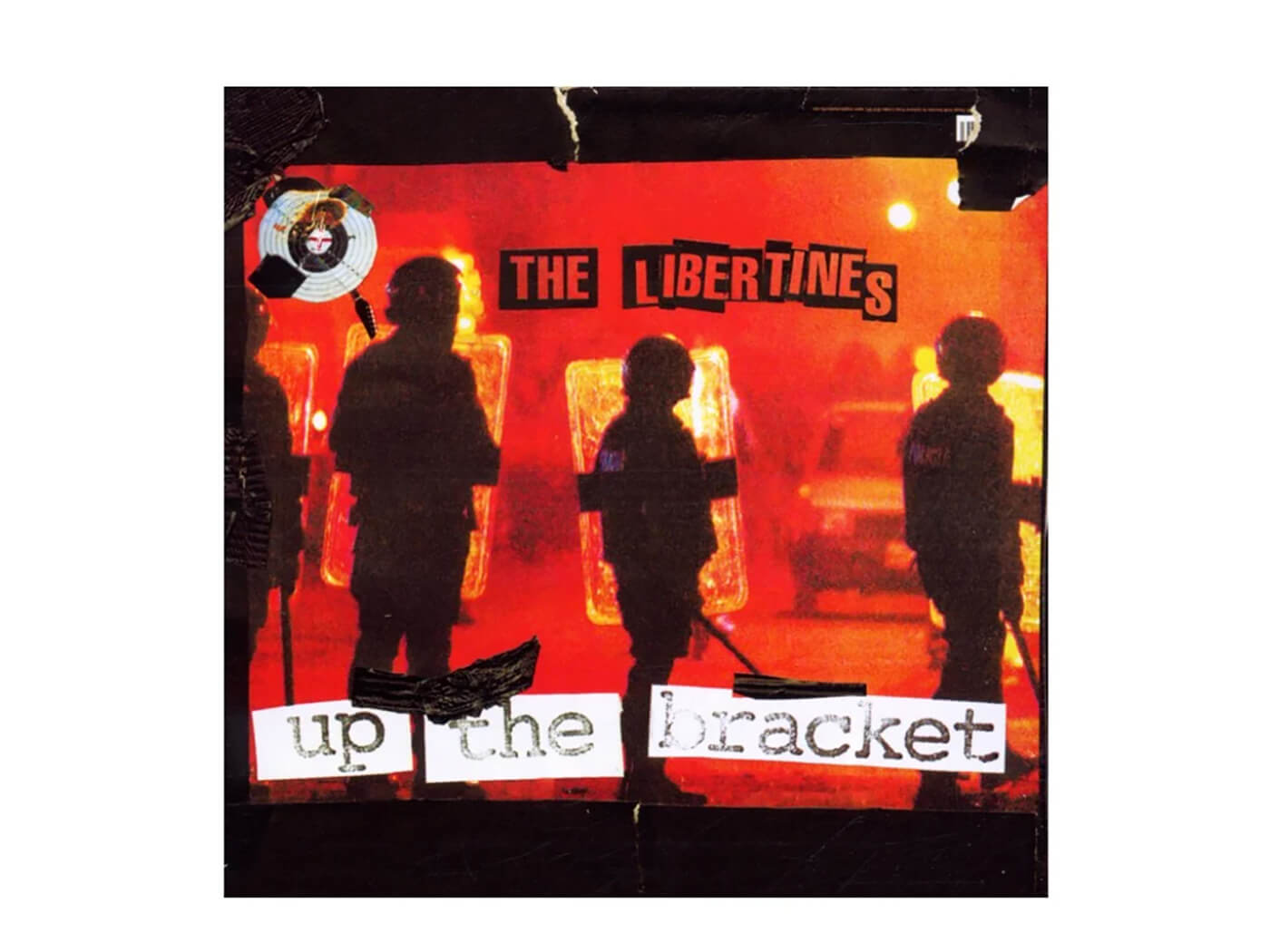 Pin me up or put me down

The Libertines’ own distinct character is all over Up the Bracket but it’s an album clearly assembled from a well of influences. There’s the Clash-like truculence of the whirlwind title track, and the dreamy lull of Radio America, which elicits a misty image of Syd Barrett. Then there’s the bawdy strut of Boys in the Band, which The Libertines: Bound Together author Anthony Thornton describes as “The Jam soundtracking a late Carry On movie in a suitably saucy, British seaside-postcard kind of way”. Up The Bracket balanced thrilling bluntness with an astute grasp of what had gone before.

Though it reached only No. 35 in the UK album charts upon its release in October 2002, The Libertines’ growing ubiquity in the press would see its sales rise as the decade progressed. The band’s next two records featured delicacies of their own but it’s across Up The Bracket’s 12 songs that The Libertines skirted true greatness, even if it was always slightly out of reach.

Up the Bracket was the wake-up call that many of the soon-to-be players in what was called the ‘indie renaissance’ by some and ‘indie landfill’ by others desperately needed. Now established as The Libertines’ central text, Up The Bracket remains a rousing listen 20 years on.

The Libertines, Up the Bracket (Rough Trade, 2002)

Death on the Stairs