The Genius Of… Walk Among Us by Misfits

Misfits (kind of) debut album has been ripped off and repackaged many times but it remains a schlocky slice of shock-rock proto-hardcore.

That’s Glenn Danzig hitting the nail on the head in Steven Blush’s indispensable 2001 book American Hardcore. No-one, from crowds to labels, knew what to do when the Misfits emerged from Lodi, New Jersey in the late 1970s, bringing schlocky theatricality, a decent Elvis croon and bulging biceps to bear on a New York punk landscape more closely attuned to poetic sleaze and artiness than gonzo proto-hardcore.

“Teenagers from Mars and we don’t care,” Danzig hollered. They might as well have been, and it’s a good thing they didn’t.

It’s odd to think of the Misfits – one of the most successful post-breakup marketing exercises in the history of alternative music – casting about for an identity. But it helps to remember that their initial moves were conducted amid the churning uncertainty of punk’s early days.

Danzig was fronting a version of the band as long ago as mid-1976, playing keys through a distortion pedal before they settled on a guitarist. The following year he was joined by bassist Gerald ‘Jerry Only’ Caiafa and drummer Manny Martínez and they tracked their debut single Cough/Cool.

The B-side She would become one of the band’s enduring songs and was re-recorded in 1978 for the Static Age album. With Frank ‘Franché Coma’ Licata on guitar and Jim ‘Mr Jim’ Catania replacing Martínez on drums, the Misfits assembled one of the great debut LPs of all time and then, as hard as they tried, couldn’t find anyone willing to put it out. It sat on the shelf until 1996, its songs filleted for a series of singles and EPs.

As they hit roadblock after roadblock, the revolving door kept turning. Coma and Catania left before ’78 was out, with Bobby Steele and Joey Image stepping in. Both would soon be gone too, with Image quitting during a disastrous 1979 UK tour with the Damned, which might have but didn’t lead to a run with the Clash, and Steele fired before forming the early NYHC greats the Undead. In Image’s place came drummer Arthur Googy, while Steele’s spot went to Only’s hulking kid brother Paul, who’d become known as the none-more-ripped guitar legend Doyle.

By the time the Misfits came together to record Walk Among Us they had generated a great deal of notoriety, if not fame. They still weren’t loved in New York but their outsized stage personas had begun to catch on.

“I remember coming to New York and saying, ‘I like the Misfits,’” Necros vocalist Barry Hennsler told Blush in American Hardcore. “Everyone was like, ‘You’re obviously a midwest bumpkin if you like ’em. Us kids from Detroit said, ‘Fuck you, they’re great.’” 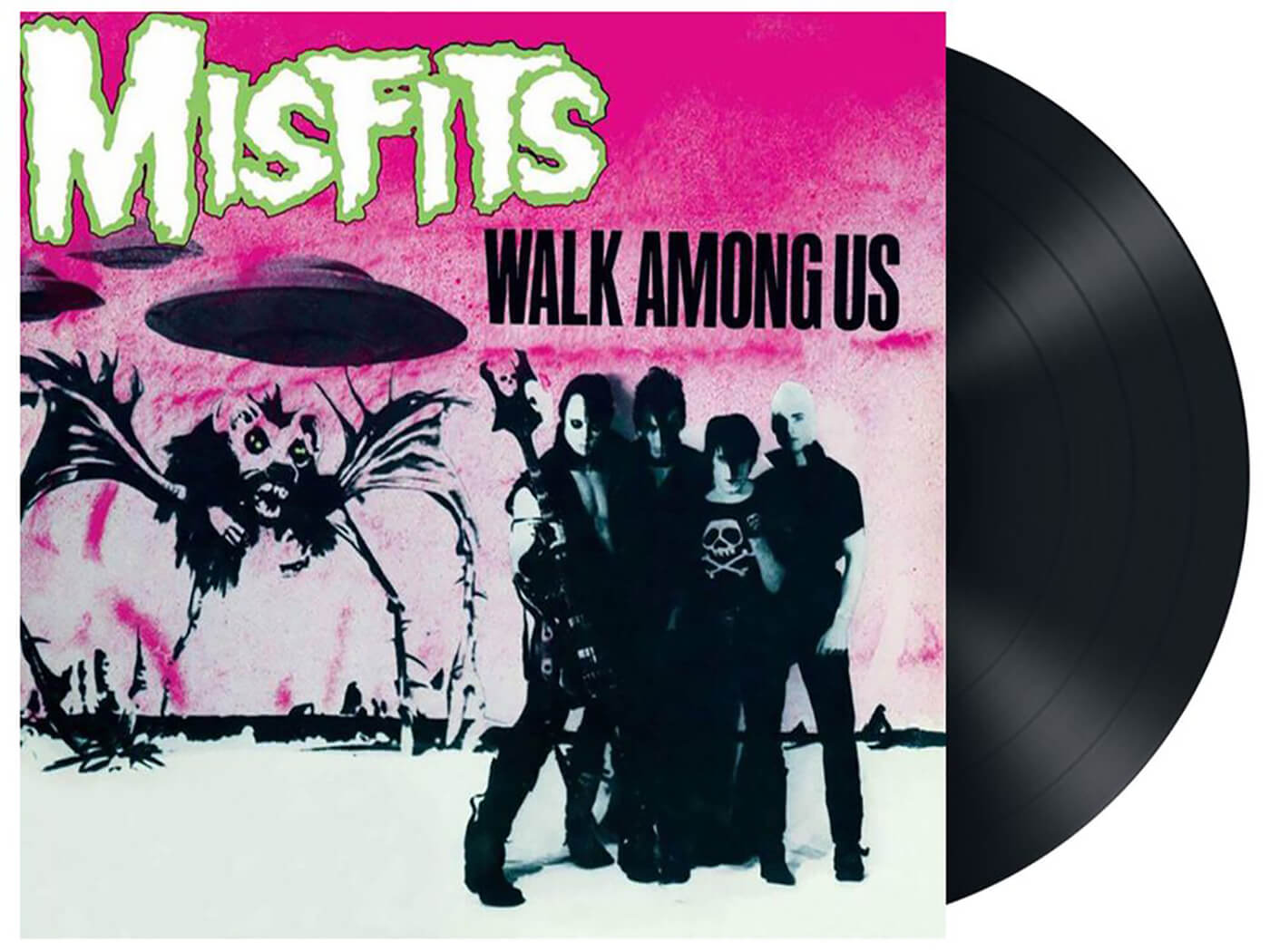 The thing about the Misfits is that the music and the image are closely tied together but not entirely representative of one another. They had a handle on elite pop songwriting and low-culture cool, from the flying saucers and grisly murders of Danzig’s lyrics through to the make-up and distinctive devilock hairstyles sported by Jerry and Doyle. Danzig purred like a rock ’n’ roll pin-up but the band looked like they were about to powerbomb someone through the Spanish announce table.

With Static Age languishing in the twilight zone and further sessions yielding some classic songs but no album, the band had to prove their mettle all over again on Walk Among Us. Remarkably, despite recording in multiple studios across a protracted period of time, they managed to assemble one of the great debut LPs of all time – again. Danzig’s writing is charismatic and scalpel-sharp, retaining some influences from pre-British Invasion rock ’n’ roll while kicking Ramones’ bubblegum hooks up a gear.

All about the grind

The songs are fast, frantic and short, and Doyle’s playing is a strange sort of ace. He has long been known for his wild Annihilator guitar – a design he came up with in high school and later built himself in his machine shop before it became a signature model with Oktober and Dean. But back in ’82 it was likely he was playing an Ibanez Iceman and perhaps the odd Les Paul. He’s not flashy but his work is grinding, thrashy and persistent.

Danzig added overdubs using a Gibson Les Paul Junior, a Vox Phantom (with a screwdriver as a tremolo bar) and a ’57 Gretsch Country Gentleman borrowed from “this Beatnik guy called George”.

“He had put in Super DiMarzio pickups which he later rewound himself,” Danzig later told Ultimate Guitar. “According to George, he used to be friends with Les Paul and George Benson and all these guys so learnt how to do all of this through them. And he also put this extra volume knob on this old guitar too.”

As clean-cut as the melodies are on songs such as Vampira and Hatebreeders, anything outside of the rhythm chug is played as though Doyle and Danzig are attempting to drill through the listener’s head, with rapid, Johnny Ramone-styled downstrokes and hammered repetition adding a weird edginess to songs that are, in so many ways, outwardly pop.

See you in court

The Misfits were never this good again but when lightning has already struck twice that might be expected. Their next record, Earth AD, pushed them further into the world of hardcore. But it was too fast, maybe even too forced. Its influence on metal – from Metallica to Cradle of Filth – was pronounced. But the album’s brute force left many of the band’s most enduring traits, most notably their affinity for melody, trampled in its wake.

They split soon after its release, with Danzig going on to front Samhain and later the band that bears his name, moving into heavy metal. Years of litigation over the use of the Misfits name followed, eventually leading to a settlement that allowed Only and Doyle to tour and record under the moniker.

In 1997 they released American Psycho and continued to tour with Michale Graves on vocals. Then the unthinkable happened, with Danzig, Only and Doyle, along with drummer Dave Lombardo and guitarist Acey Slade, reforming as the Original Misfits in 2016 and playing reunion dates at Riot Fest in Chicago just as they will this summer, running through Walk Among Us in full for its 40th anniversary.

All this chopping and changing, all this mess and bad feeling and missed opportunities, all these perfect songs that lasted against the odds. The Misfits have been ripped off and repackaged time and time again, even inspiring essential punk bands such as AFI and Alkaline Trio. But you can’t beat the real thing.