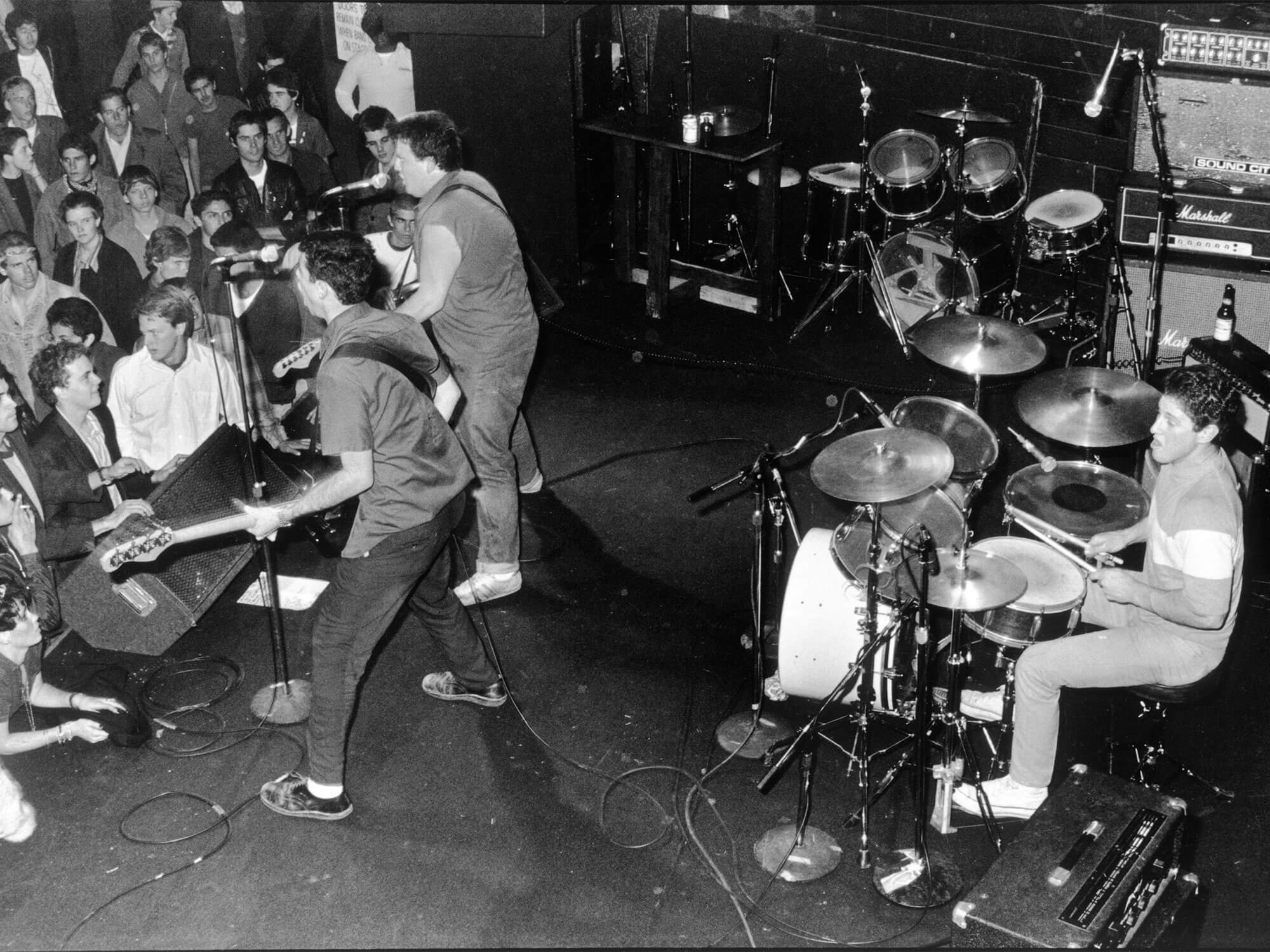 A power-trio like no other, Minutemen thrived in the space between a street fight and a ballet routine: D. Boon’s guitar, Mike Watt’s bass, and George Hurley’s drums always seemed to be at each other’s throats, but one didn’t work without the other.

Boon’s kind of noise was all treble, and punishingly loud. He played very few chords, sticking to scratchy, aggressive picking and a constant weirdo barrage of notes, and essentially skipped distortion entirely. Watt’s answer was complex, mashing together skronky funk with thunderous chords and countermelodies. Hurley attacked his toms and lurched from rhythm to rhythm. They were always separate, but always together.

Boon and Watt were childhood pals from the blue collar enclave of San Pedro, California who learned to play on pawnshop gear bought by Boon’s mother to keep the pair out of trouble. After a short while learning meat and potatoes rock covers, their instruments (neither initially knew the difference between a guitar and bass beyond how many strings they had) allowed them to discover a different kind of trouble: punk rock and the idea of “jamming econo”. Econo is Pedro slang for doing things on the cheap, but Minutemen turned it into a vital philosophy.

They made do with what they had at their disposal, they kept songs short and budgets low without surrendering their sense of ambition. “The punk rockers picked up on that, the idea of scarcity and just using what you got,” Watt told Michael Azerrad in Our Band Could Be Your Life, a book named after a Minutemen lyric.

Released in 1983, their second album What Makes a Man Start Fires? isn’t the band’s most famous work. That would be their sprawling, 40+ song 1984 double album Double Nickels on the Dime, which is not surprisingly judged to be their masterpiece. But…when has a double album ever been able to compete with a lean, mean single LP? Double Nickels… feels on one hand like an idea, a dream, and on the other a weighty anthropological document. Its predecessor is just a killer record by a charismatic band who know what they’re about: for the first time jamming econo is equated to creating art that feels boundless.

Minutemen sounded fully formed fairly quickly. On their scrappy first EP Paranoid Time – released by Greg Ginn’s SST label in 1980 following a chance encounter with Black Flag outside a Clash show – all the pieces are in the right places, from Watt’s wandering bass to Boon’s history-lesson-with-footnotes rants and lacerating leads.

Boon played a cobbled together Strat made from parts that were maybe Fender but probably weren’t and a single-cutaway Melody Maker. “[He] put a Strat pickup in that,” Watt told Premier Guitar. “He got that from Dezo – Dez Cadena – of Black Flag. He had a buddy make him a pickguard out of sheet aluminium so it wouldn’t break. It just had a volume knob and that one Stratocaster bridge pickup. He played that for a few years until I got him his first Telecaster, because he always wanted a Telecaster.”

Released the following year, Minutemen’s first LP The Punch Line sounds like a race to the finish, packing 18 songs into 15 minutes, and it was recorded that way: in sequence and essentially live. Its follow up would be almost twice as long for the same number of songs and it felt bigger, more sure of itself, without actually changing much sonically.

What Makes a Man Start Fires? was again recorded with SST’s in-house engineer Spot, who managed this time to get a better grip on the dynamic interplay between Boon and Watt. It’s also more outwardly melodic and, in the ringing chorus chords and ripping solo of 99, even indebted to the band’s roots in worshipping Creedence Clearwater Revival and Blue Öyster Cult.

The opening salvo – Bob Dylan Wrote Propaganda Songs into One Chapter in the Book – is a pulse-quickening delight, with Boon’s skeletal guitars spiralling around Watt and Hurley’s propulsive playing. Minutemen records are supposed to be scarfed down whole, and here the sequencing is expertly carried off, with odd interludes such as Beacon Sighted Through the Fog (which features guitar improv from kindred spirit ​​Joe Baiza, of the influential Los Angeles punk band Saccharine Trust) and Split Red jutting between pensive jangle-pop (Mutiny in Jonestown) and head-spinning funk freakouts (The Only Minority). 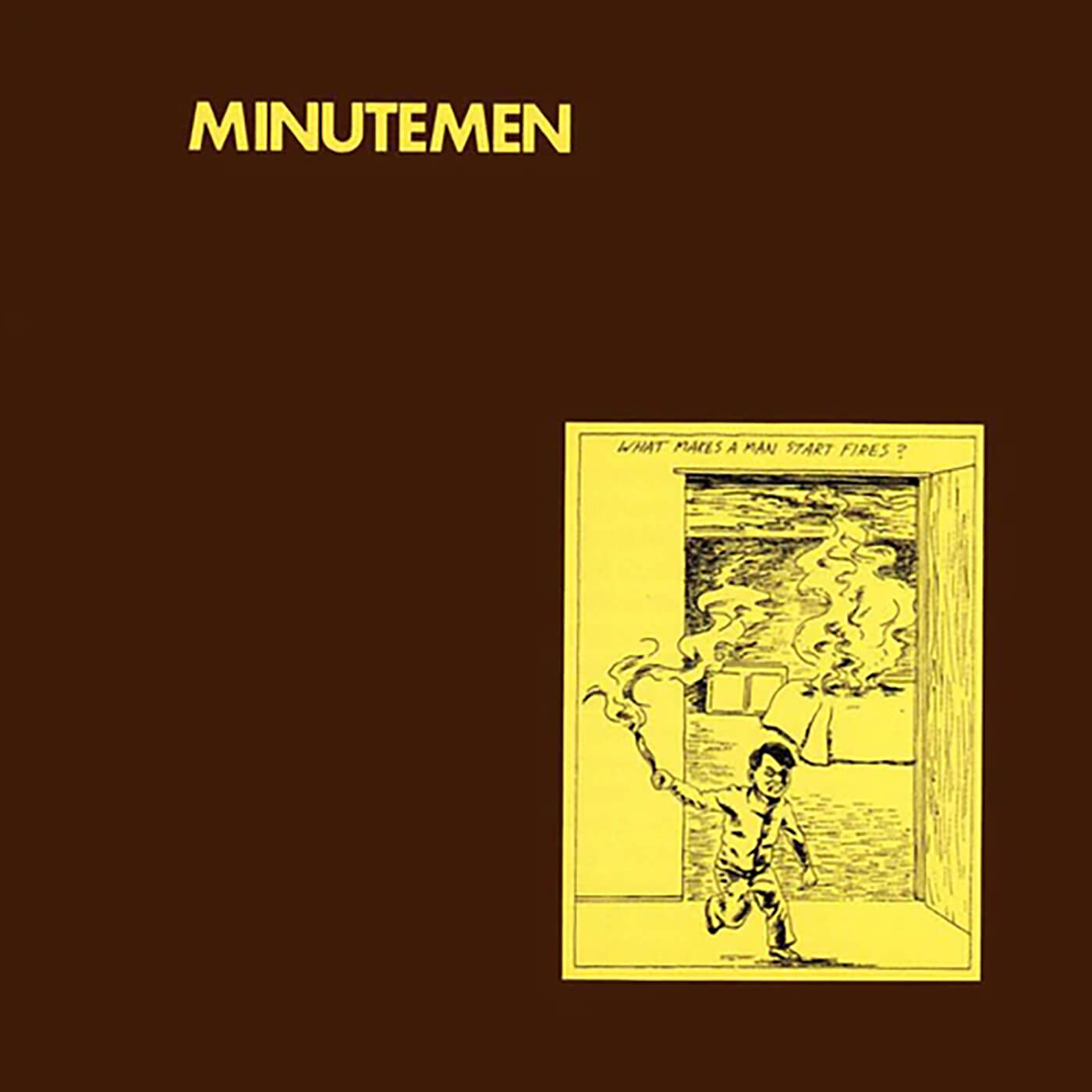 It’s funny, and very Minutemen, to think that a record as sharp and direct as What Makes a Man Start Fires? could be seen as bloated but, according to Spot, that’s the conclusion Watt came to during its construction. “Paranoid Time and The Punch Line were done on a 16-track machine,” he told Premier Guitar.

“What Makes a Man Start Fires? was 24-track. But somewhere in that whole thing, Mike was grousing about the multitrack stuff. He was a guy who, kind of like me, was very much influenced by the jazz approach, where you go into the studio, do it live, and don’t worry about any of that other stuff.”

Jamming econo meant that overdubs were largely verboten, and Spot observes that sections of the ensuing Buzz or Howl Under the Influence of Heat EP were committed to two-track tape live at Total Access Studio in Redondo Beach.

Only one D. Boon

D. Boon died in a car wreck in December 1985, aged 27, soon after the release of a covers-heavy fourth album called 3-Way Tie (For Last). Minutemen split immediately, because they had to. There has perhaps never been another band more closely tied to the personalities of its members. It could never have functioned without him. Watt formed the dual-bass outfit Dos with Black Flag’s Kira Roessler, while he and Hurley went on to shared acclaim with Firehose, including a brief spell on a major label.

Minutemen’s legacy is ethical as much as it is musical, for a couple of reasons. On one hand, the idea behind jamming econo remains a foundational tenet of DIY. On the other, no band could hope to sound like Minutemen. You just have to accept that they were a one-off: a bassist who couldn’t sit still, a drummer who wouldn’t sit still, and a guitarist with a tone designed to slice clean through the front two rows. J. Mascis once said they were the most punishing live band he ever saw, and if anyone should know…