Yola – Stand For Myself review: the work of an extraordinarily gifted vocal talent

After wowing us with 2019 debut Walk Through Fire, the Nashville via Bristol vocalist delivers a second collaborative album with producer Dan Auerbach.

Two years ago, Yolanda Quartey’s debut solo album, Walk Through Fire earned the singer four Grammy nominations. You have to wonder how many the follow-up might get, such is the potency of the songcraft, the devastating power of the Bristolian’s colossal soulful vocal and the uninhibited diversity of musical styles she tries her hand at. Having relocated to Nashville, the British singer looks destined to become a massive star.

Black Keys guitarist and A-list producer Dan Auerbach has been confident of that fact for some time, producing and co-writing Walk Through Fire at the guitarist’s Easy Eye Sound studio in Nashville. He’s at the helm again here, although determined not to be surrounded solely by white dudes in denim, Yola played a more active role in selecting the co-writers and musicians.

It’s an astute move, because Stand For Myself sees the 37-year-old exploring every corner of the record collection she grew up with. In her own words “a paradigm shift”, Yola’s second album delves into soul, R&B, disco, funk, gospel, Americana, lavishly orchestrated pop and country, the influences of Tina Turner, Minnie Riperton, Barry Gibb and Elton John equally apparent.

This second record in three years began to take form when the pandemic forced the cancellation of stadium dates with country superstar Chris Stapleton. Recording took place across a series of late-night sessions in autumn 2020 with a rhythm section including Dap-Kings bassist Nick Movshon, who worked with Amy Winehouse, and drummer Aaron Frazer.

While Yola has been playing guitar for almost a decade, as well as spells fronting country-soul outfit Phantom Limb, singing with Massive Attack and playing Sister Rosetta Tharpe in Baz Luhrmann’s Elvis biopic out next summer, she concentrates on vocal duties on Stand For Myself. Taking care of business alongside Auerbach are Billy Sanford, Tom Bukovac, Russ Pahl and Dan Dugmore.

A delicious lick on the verge of breakup and divine harmonies weave around the singer’s mighty yet nuanced voice on glittering opening track Barely Alive, a meditation on the importance of existing in the moment and taking your chances when they arrive – something the west country singer appreciates more than most, having spent time homeless on the streets of London. “When will you start living, Now that you’ve survived?” she poses in a radiantly melodic chorus with its roots in early-70s soul. 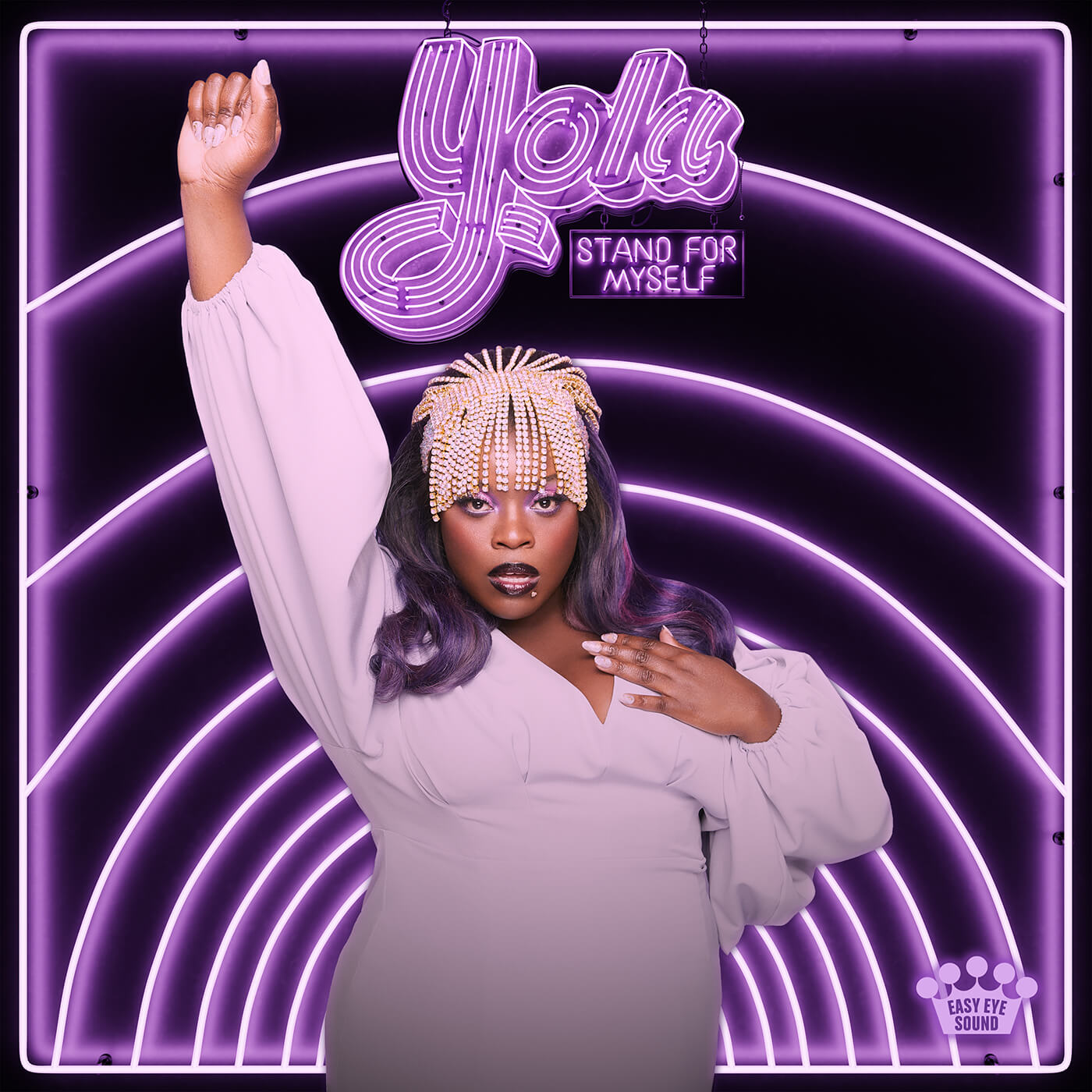 Dancing Away In Tears, co-written with Auerbach and Yola’s fellow Highwoman Natalie Hemby, begins with almost Bacharach-esque horns and settles into a disco groove with sprightly decorative percussion. The lovelorn chorus melody is superb, whipped up from that rich soup of influences as Yola emotes “Breaking up is always hard to do, One last dance is all I want with you”. There’s something of a Motown feel about Diamond Studded Shoes, barrelling in on a joyous bassline, augmented by Pahl’s vocal slide runs with their roots in Tennessee. Lyrically, it’s a rejection of cruel austerity politics, the breezy infectiousness juxtaposed with sobering indignation: “we are the poor ones, rowing up against the tide, burning our reserves of courage”.

A love of country is audible on Be My Friend, a rousing duet with Brandi Carlile that’s an ode to companionship, the pair’s towering vocals joined by a sweet lilting guitar break. Great Divide, meanwhile, is a slow-waltzing soul ballad founded on piano and acoustic guitar. An unhurried melodic slide solo, announced by a pregnant pause, is right on the money, and the aching bends on the outstanding, bluesy Starlight and serrated tremolo stabs on If I Had To Do It All Again are equally absorbing. An early Barry White disco energy Yola referenced in interviews is all over Now You’re Here, featuring The McCrary Sisters and a delectable recurring riff. As is so often the case on Stand For Myself, the chorus is sublime.

Some of the songs on this sophomore album have been with Yola for years. Sparked by the death of her mother in 2013, Break The Bough surprises with its exultant mood, Raymond Mason’s horn playing and the driving rhythm section at the centre of a storming band performance. The tribute is made all the more heartbreaking by the vivacious tone, as she tells her mum, “Fall into the deepest sleep, dream of mangos on the tree, Sugar cane and shoeless feet”.

There’s evidence of a sharp, sardonic observational writer on the penultimate Like A Photograph, as Yola muses “whoever said life was like a river that was going to roll on forever, had to have been out of their mind”. As strings and horns swell, the phrase becomes a mantra. Yola is an artist who has dealt with great hardship, both personally and professionally, and she appreciates that life is fleeting.

The tremendous closing title track is a defiant philosophy for life and autobiographical tale of meeting pain and injustice head-on. Bukovac’s percussive acoustic opening and Yola’s stirring falsetto suggest Fleetwood Mac and a spitting fuzz riff encourages the band to rise around an impassioned cry of “I used to be nothing like you, I used to feel nothing like you,” by this time the Bristolian singing for all she’s worth. She reaches the conclusion “Now I’m alive, it’s hard to explain, It took this much time, it took this much pain, You can get here if you’re willing, Let go of yourself for a new beginning”. That’s the experience she’s lived and only the coldest-hearted cynic could fail to identify.

Having endured through the sort of adversity that would debilitate lesser artists, Yola’s star is rising at pace. Her second album’s arrangements are more expansive, the use of that once-in-a-generation voice more nuanced and controlled, and despite the wealth of musical styles she inhabits, it’s an empowering, uncompromising statement of self. Or as Yola puts it: “This is who I’ve always been in music and in life. There was a little hiatus where I got brainwashed out of my own majesty, but a bitch is back.”

Yola’s Stand For Myself is out now.