They’re all hand-made with high-quality components, custom transformers and finger-jointed cabinets, but that’s where the similarities end. We sample three contrasting slices of boutique American pie… 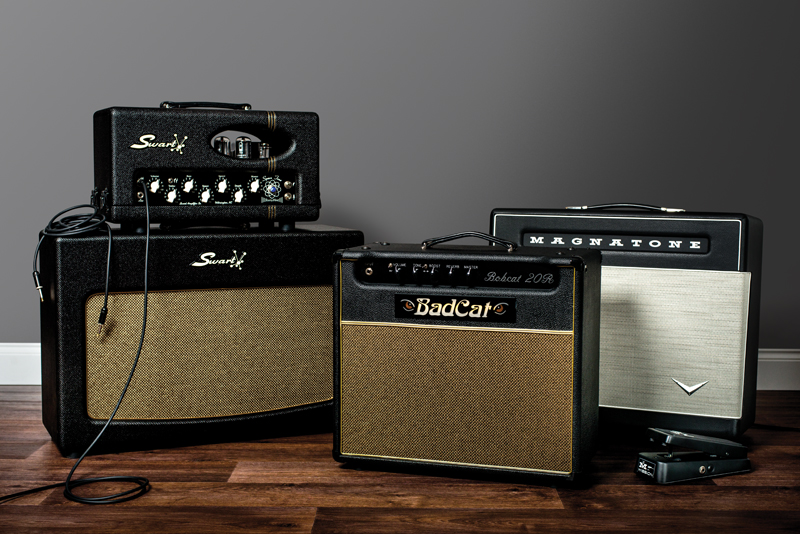 Although many boutique amps still have a retro vibe, it’s no longer enough to simply rehash vintage designs. These days, boutique amp buyers can expect more features, greater versatility and real-world practicality. For those of you with the necessary funds, it keeps getting better.

In order to get an overview of what the contemporary US boutique amp scene has to offer, here’s a trio of amplifiers with very different sounds and cosmetics from brands with a reputation for high quality where it counts. Admission prices start off at reassuringly expensive and quickly blast off into the stratosphere. Strap yourselves in… 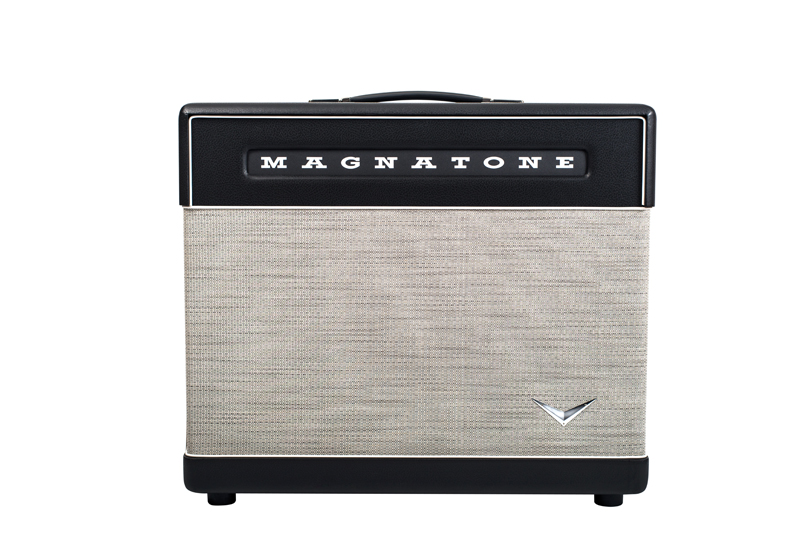 Magnatones have been used by everyone from Buddy Holly to Slash and damn near every tasty and rootsy player in-between, but the Magnatone sound remains synonymous with the guitar hero’s guitar hero, Lonnie Mack. It’s not about sparkling cleans, or even an identifiable overdrive characteristic ± the defining element for Mack and Magnatone is `FM vibrato’.

Developed with input from Billy Gibbons and launched as part of the brand’s 2013 revival, the Super 15 has a `British inspired’ amplifier circuit running two EL84 power valves and a GZ34 rectifier, combined with Magnatone’s varistor vibrato/tremolo circuit. Inside the plywood cabinet, there’s a 12-inch Warehouse ET90 speaker, with carbon film resistors and a mixture of Sprague and Mallory 150 capacitors loaded on a printed circuit board.

The controls are restricted to gain, tone and master, along with speed and intensity, with an expression pedal that also controls speed. In case you’re concerned, the FM/AM switch doesn’t determine the type of unwanted radio interference the amp picks up. It’s a frequency/amplitude modulation switch to select tremolo or vibrato. 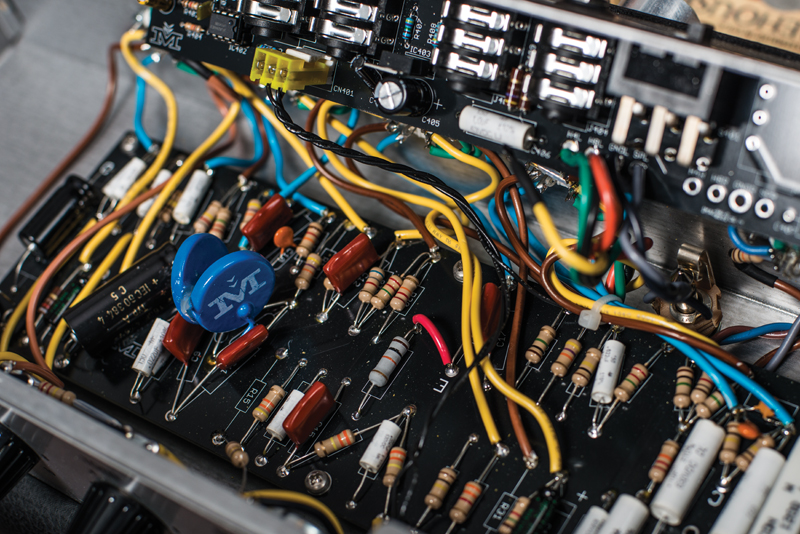 Overall, the finish quality is presentable rather than exceptional, but the mid-century modernism impresses. The grille cloth wouldn’t look out of place covering a Mad Men sofa and they’ve even used mini bulbs to backlight the Magnatone lettering.

The 15-inch speaker and the Vox-inspired circuitry define the overall tone. It’s a big-sounding speaker that can fill a room with warm, syrupy tones, but it doesn’t have that much high-frequency sparkle.

Although not an especially versatile amp, the Super 15 is capable of some very pleasing clean and overdriven tones, but they’re all variations on a theme rather than a smörgåsbord of sounds, and things can get a tad ragged when the amp is pushed to its limits.

The limited tone-shaping capability means you need to be bold with the treble roll-off. With humbuckers, I managed to dial in some woofy ZZ Top-style grind by maxing out the gain and master and turning the tone fully down. At more sedate settings, semi-hollow guitars sounded woody and deep, and the only issue was keeping low-frequency feedback in check. 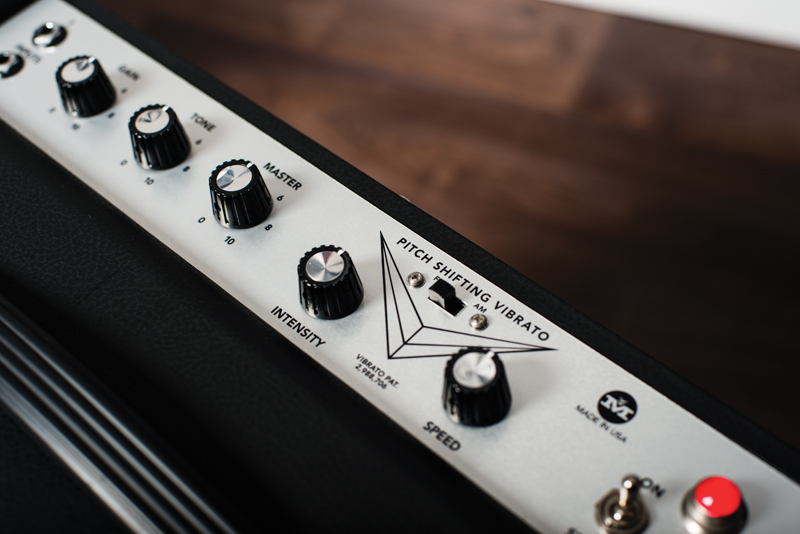 The Super 15 is all about the vibrato, and to a lesser extent the tremolo. The beautiful vibrato has a swirly and slightly phasey quality that falls somewhere between a rudimentary chorus (without sounding dated) and a Leslie speaker (without the swoosh).

The tremolo is so deep it feels like a heart massage, and the player-friendly rise and fall characteristics permit heavy settings without excessive choppiness. Rocked fully back, the expression pedal sets the speed to zero, which is the same as turning the effects off. I had fun swelling modulation into fading chords and adding just the right amount of burble to picked arpeggios.

As 15-watt amps go, the Super 15 is fairly loud and produces a big, room-filling sound. With onboard spring reverb, it would have been Twin Peaks in a box. It undoubtedly nails the Lonnie Mack vibrato, but so do affordable pedals such as the Bigfoot FX Magnavibe. That said, you can use a pedal in front of any amp, but you won’t get foot control. The tone is certainly pleasing, but without the effects, edgier players may find it slightly uninspiring. 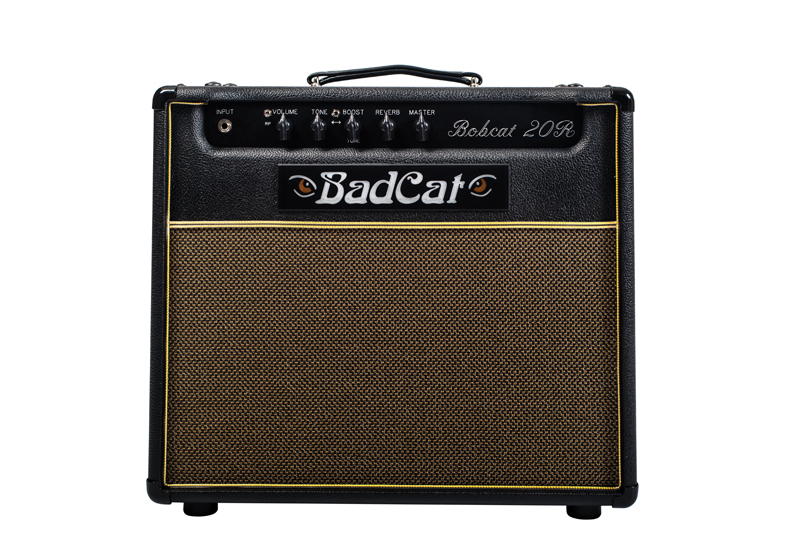 Don’t let the two 6V6 power tubes and the open back 1×12 combo cabinet mislead you into thinking this is some 5E3 wannabe. Bad Cat has opted for a large early-50s style dual triode preamp tube, called a 6SL7. There is one 12AX7 but it’s used for phase inversion, and solid-state circuitry drives the spring reverb.

On Bad Cat’s website, you can find two different power ratings – 15 and 20 watts. A quick peek inside led me to conclude the Bobcat 20R is actually a 15-watt cathode biased amp and the lower figure is correct.

The chassis is obviously used for several different Bad Cat models and plastic plugs blank off non-required holes. The insides may look a bit chaotic, but it’s actually quite neat for an amp that is mostly wired point to point. Other nice touches include an illuminated display and gold-plated connections for the reverb.

The main controls are gain, tone, reverb and master volume, which should be self-explanatory. A boost switch bypasses the tone control and works in conjunction with a rotary boost control. This feature is also footswitchable. A second panel switch engages the rip circuit for yet more gain and there’s a passive series effects loop. 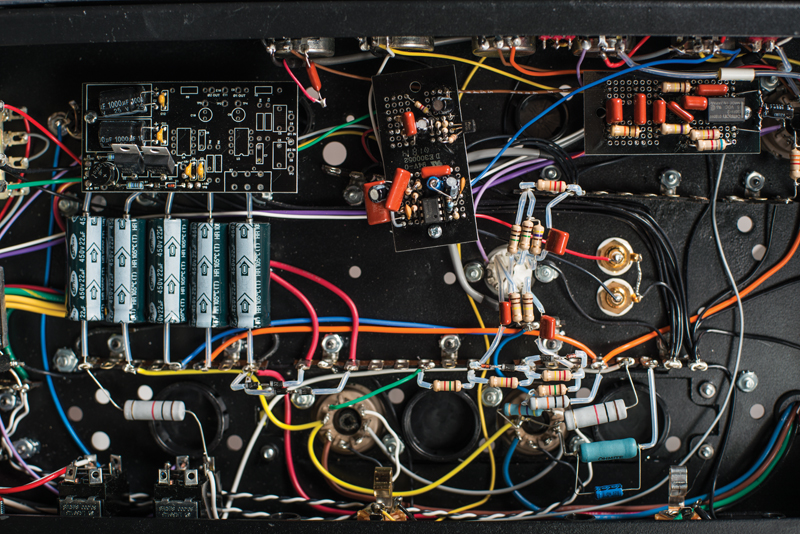 The 12-inch Celestion speaker is described as `Bad Cat proprietary’, although a small label reads `Vintage 30′. With a plywood cabinet and chunky transformers, the 20R weighs 40lbs.

It takes a while to get used to the Bobcat’s way of doing things because this is a bright, loud and belligerent little critter that is capable of getting a bit edgy if you let it.

Towards the upper limits of the master volume, the sound gets noticeably brighter. About three o’clock seems about right if you want the tone control to remain effective. The rip switch boosts the front end for more gain and crunch, but you can achieve the same result by simply increasing the volume, and you may find the tone is a little sweeter.

Boost has a far more noticeable effect on the sound and dynamic response. I noticed a loss of treble, along with a thicker and boxier midrange honk. There’s a lot more overdrive, too, and the response is softer and more compressed.

If the tone is too thick and muddy, there are two options. If you turn up the master volume, the sound becomes more defined as fizzy harmonic overtones join the fray. Alternatively, you can turn the boost control down and compensate by increasing the gain setting. This overcomes the boxiness and improves the clarity of the sound by de-emphasising the midrange. 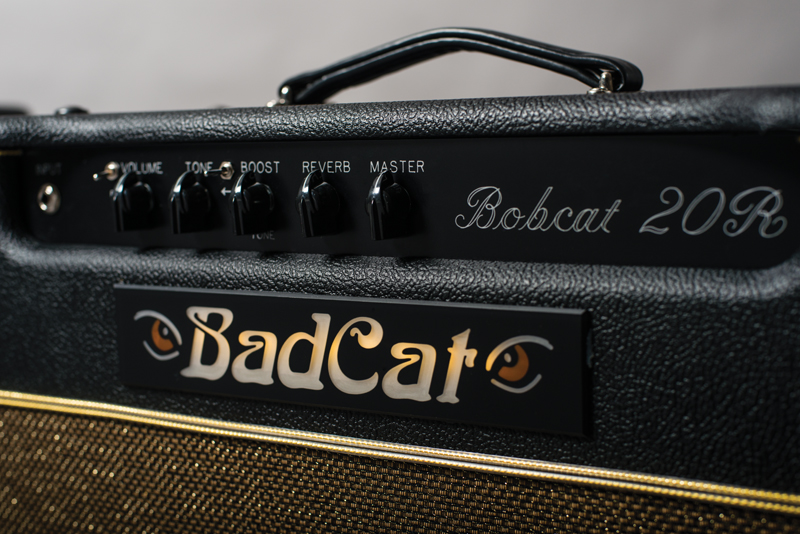 The onboard reverb sounds huge and bright, but the reverb control is a bit on/off. Despite producing some very decent and chimey clean tones, the Bobcat 20R’s real forte is punchy, aggressive overdrive and crunchy distortion. It’s not exactly subtle, but it’s fun. Many people associate the term `boutique’ with smooth, refined tone based on vintage designs and well-proven circuitry; the Bobcat 20R takes some of those elements as a starting point, and then veers off on a rockier road.

Its naturally toppy and punchy character may be a tad full-on for single coils, but rockers with humbuckers will enjoy the crunch, sustain and tightly controlled bass. 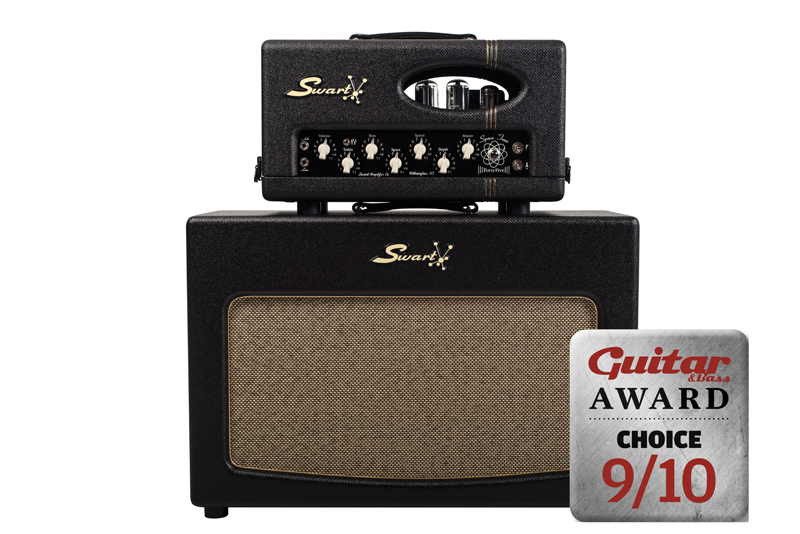 The looks and specs epitomise the notion of a `boutique’ amp to such a degree that the Swart feels almost like a parody of the genre. We’re talking carbon composite resistors and Mallory signal capacitors hand-wired onto turret board with star grounding, cloth-covered wire and zero negative feedback.

This valve-rectified 45-watt Class AB amplifier has reverb and tremolo and all the valve heaters are referenced to ground. Power valve bias test points are mounted on the back panel and Swart provides instructions for setting the bias.

Incorporating 1950s comic book sci-fi motifs and a control layout like something from a mad scientist’s laboratory, this is amp design as art. Black tweed with gold piping adorns the pine cabinet, but the most imaginative feature is the head’s lift-off lid, which comes away to reveal the valves and transformers.

Besides looking fantastic, the idea is to make valve swapping easier. It would probably be OK to experiment with different preamp triodes because they’re all 12AX7s, but Swart recommended trying a 5Y3 instead of the GZ34 rectifier. 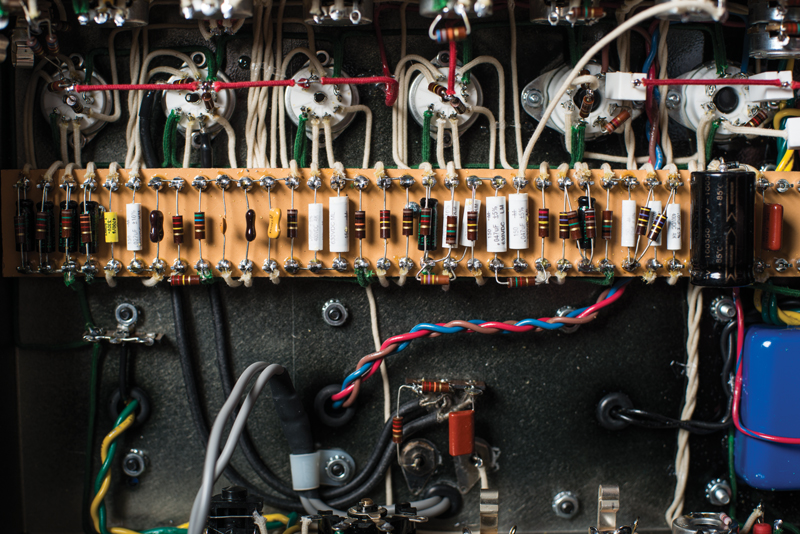 This amp represents a departure from Swart’s small and simple formula. It’s the most powerful amp the manufacturer currently offers and the first to have treble and bass controls, and fixed bias. We tested it with a matching Swart 2×12 cabinet loaded with Celestion Creambacks.

In addition to the tone controls, there’s volume and master, plus speed and depth for the tremolo, space for the reverb and a three-way treble voicing switch. This may appear simple, but things are unusually interactive.

Put simply, the volume and master settings determine the treble content, as well as preamp and poweramp levels. With the master fully up and the volume around halfway, you get a clean and transparent tone that’s also fairly bright. Even players who appreciate bright and spanky tones may feel inclined to roll the treble right back and select the darkest setting on the voicing switch.

Everything changes as you reduce the master and increase the volume, with the mids filling out and the treble rolling off dramatically. Together, the treble control and voicing switch enable you to set the upper-frequency response with minute precision.

In essence, the Space Tone 45 sounds like medium-power tweed with a world-class tremolo, `blackface’-style highs and 5E3-type touch dynamics. The reverb has a more distant character, sounding fairly dark and sitting behind the dry signal. Interestingly, like the Bad Cat, you can turn the volume right down and still hear a fully wet reverb signal, which suggests the reverb works on a side chain. 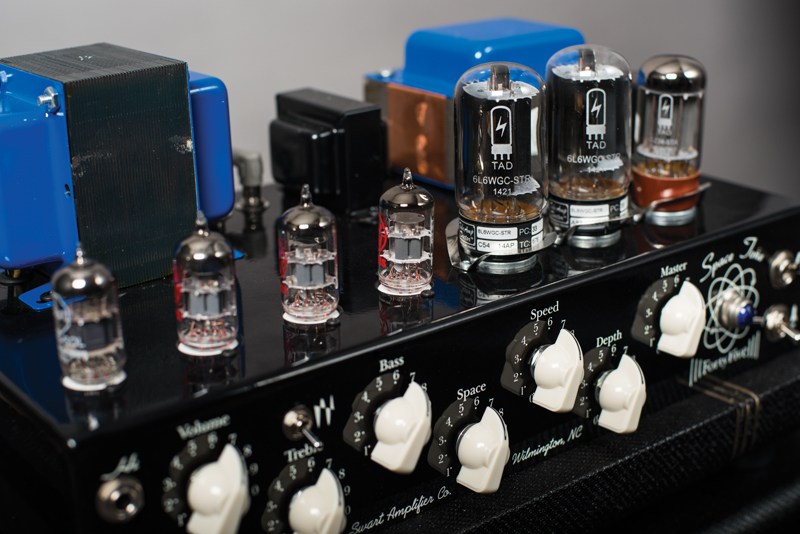 Even so, it’s far removed from the cavernous drip of a Twin, or indeed the ‘verb onboard other models in the Swart catalogue. You can combine chewy, touch-sensitive overdrive with chiming highs, or roll back the top for barking, bluesy honk.

I couldn’t decide whether I preferred the incandescent shimmer of the GZ34 or the spongier, grungier and tweedier delights of the 5Y3, but either way the ST45 seems to bring out the best from every guitar, and it’s a valve amp tweaker’s delight.

The Space Tone 45 is resolutely rootsy in an all-American sort of way. Although the overdrive can really bark, it’s by no means a high-gain amp and pedal assistance is required for creamy, single-note sustain. Reverb obsessives may be underwhelmed, but for general playing duties it renders pedals superfluous, and I’m chalking the Space Control 45 up as one of the finest amps I have played. 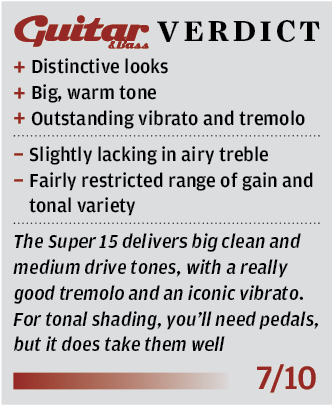 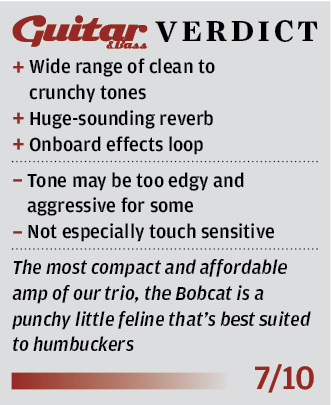 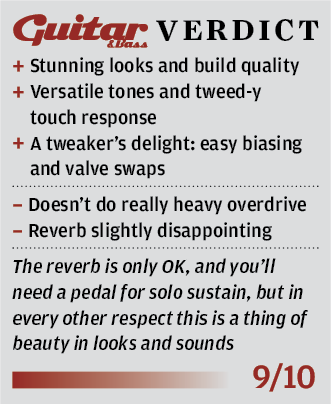