IK Multimedia TONEX Max review: is this the budget amp profiling software we’ve been waiting for?

With Kemper and Neural DSP changing the game for digital amp recreations, this new software from IK Multimedia offers a quality profiles of the world’s best amps and the ability to digitally recreate your own equipment – all for a fraction of the price of the competition. Surely not… 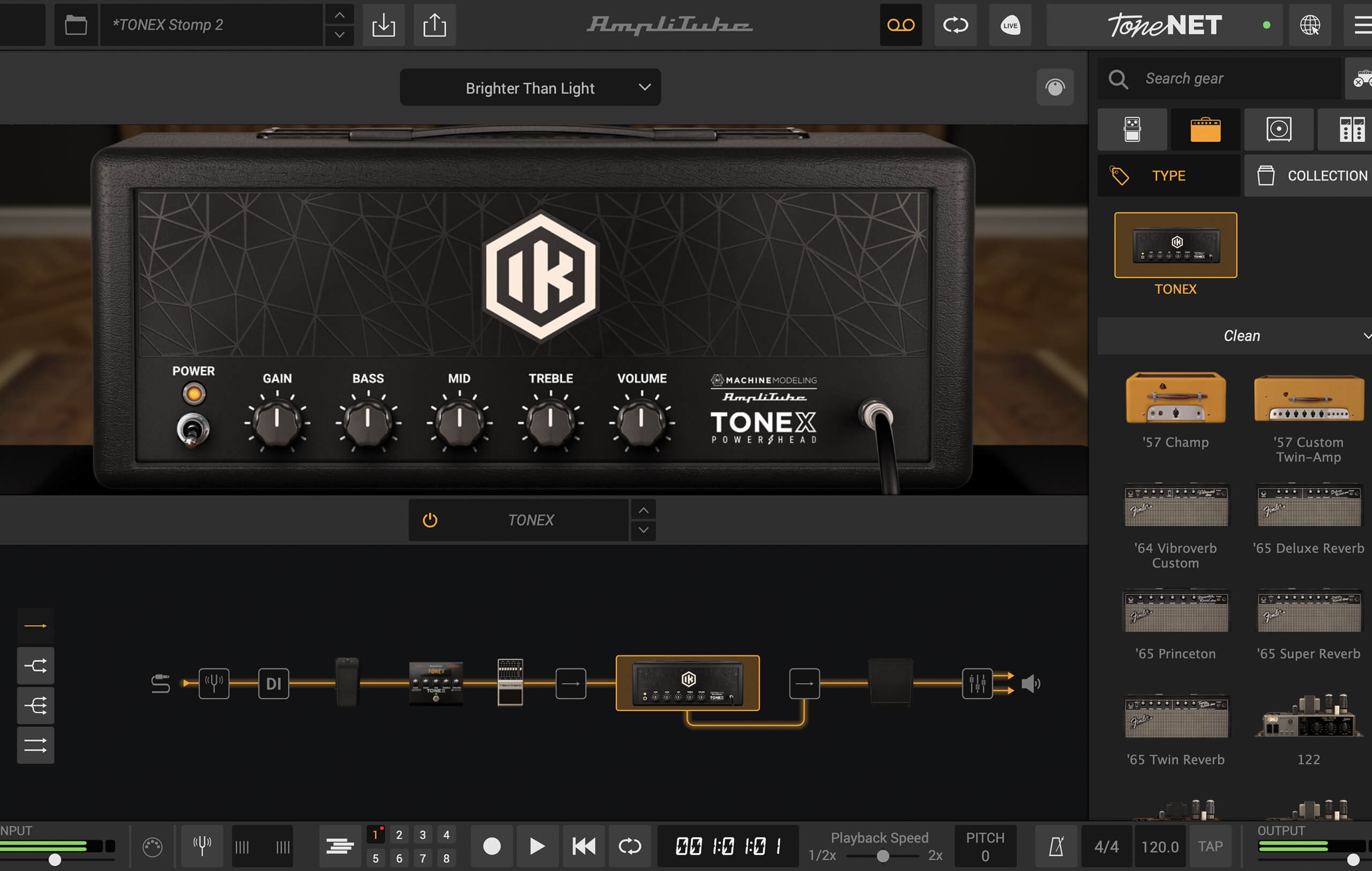 Not quite the profiling game-changer we’d hoped but this is still an impressive piece of software that offers a huge breadth of quality guitar tones, especially when paired with AmpliTube.

As you get older, keeping up with technological developments can feel like a burden – who really understands the difference between the new iPhone and the old one, really? And even then, is there any point getting excited about the new one when another will be along to replace it any day now. Being a guitar player has been a little like that in the last few decades – no sooner had we got our rackmount units meticulously situated and ready to roll, it was back to amps and pedals again, then it was the turn of digital modelling amps and multi-effects, before we went back to rackmount gear (this time in modelling form) and on and on it goes.

For many recording and gigging guitarists in 2023 however, the solution is software – the era of plugins and direct recording has made the amp superfluous for many, and the game-changing ability of hardware solutions like Kemper’s Profiler and Neural DSP’s Quad Cortex to faithfully capture a digital reproduction of any real amp you put in front of it has blurred the line between the two.

What does TONEX do?

It’s into this era of blurred lines and digital facsimiles that IK Multimedia has released TONEX – a ‘software-based ecosystem for creating, sharing and downloading Tone Models of guitar and bass gear, powered by IK’s new AI Machine Modelling technology’. Effectively, it promises to do what Kemper and Neural DSP’s hardware units do, all on your laptop or phone, for a price as little as free. 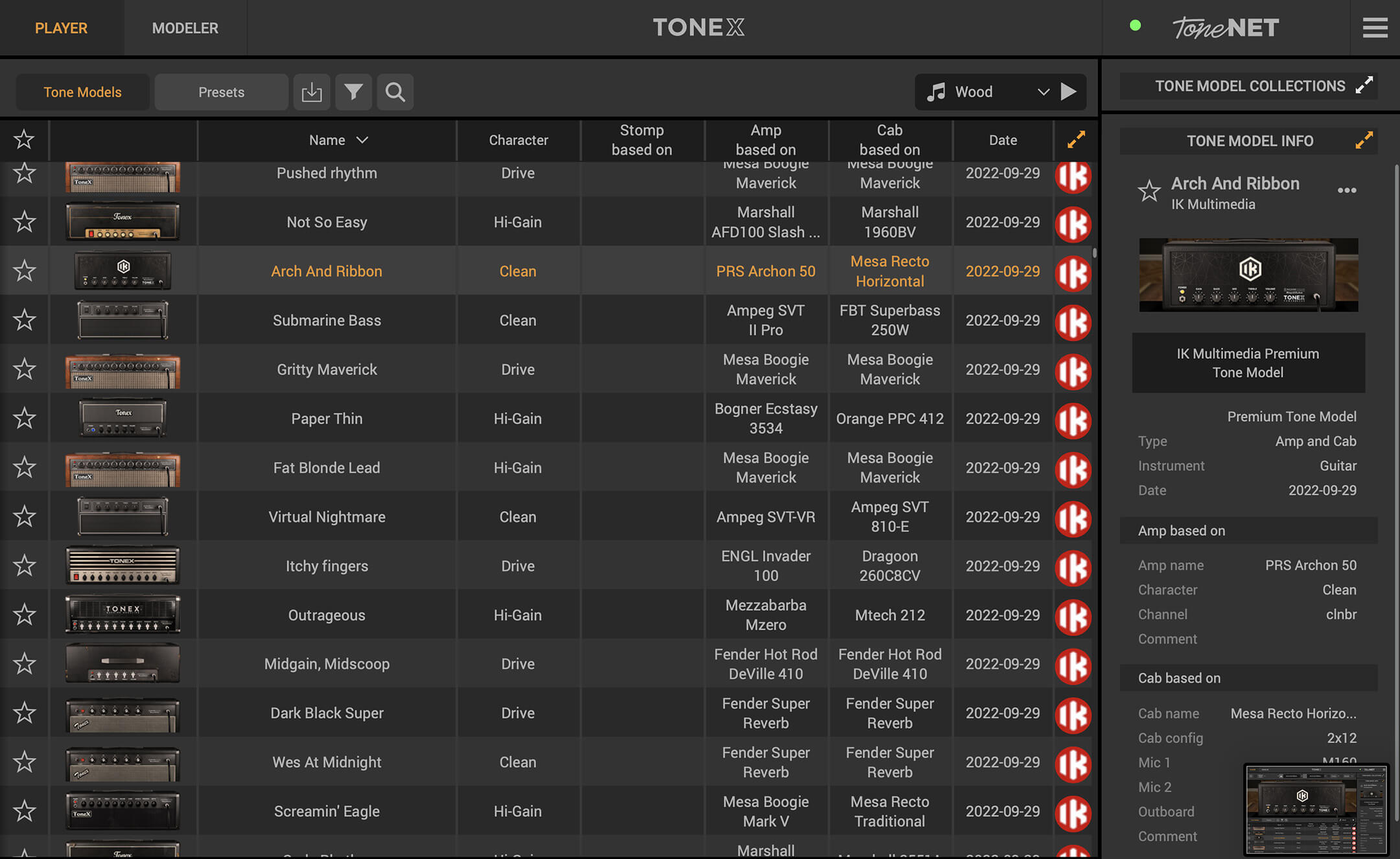 There are three versions of the TONEX software each offering more amps and features than its financially inferior counterparts. The free CS version offers just 10 ‘Tone Models’ and a limited amount of editing and functionality, the SE version (€49.99) that has 200 models and the standard version (€149.99) with 400. We’re getting to grips with the ‘Max’ version (€249.99) that offers 1000 Tone Models and unlimited access to user-created Tone Models via IK’s ToneNET user community. 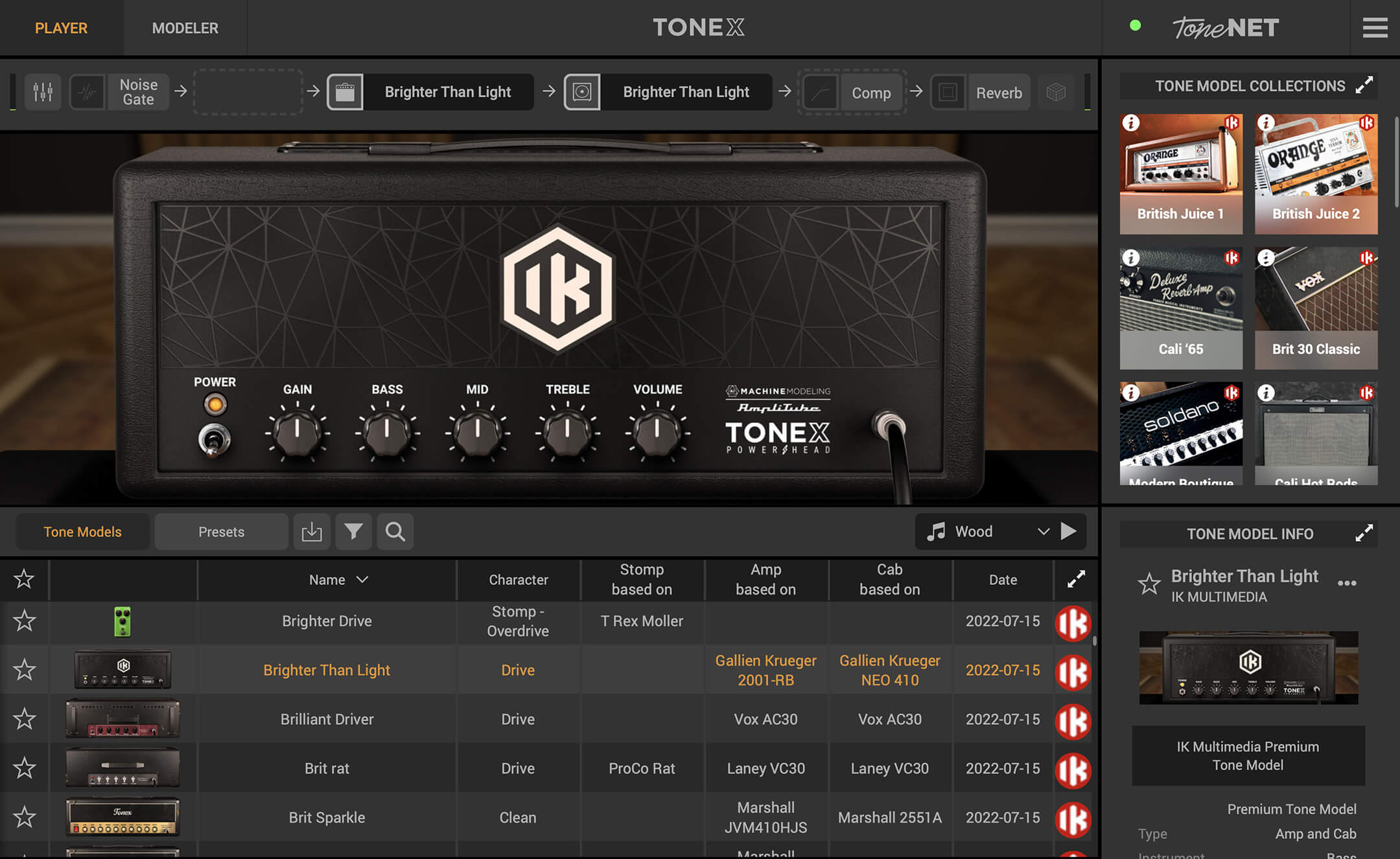 The models are accessed via either IK’s standalone TONEX Mac/PC editor, or via the TONEX mobile app, and have been captured using IK’s own AI Machine Technology, which claims to have the ability to ‘model the sound of any amp, cabinet or combo, plus pedals like distortion, overdrive, fuzz, EQ or boost, all with accuracy that’s virtually indistinguishable from the real thing”. With the purchase of any of the paid versions of TONEX you also get the ability to use this AI Machine Technology to capture your own equipment in the style of a Kemper or Quad Cortex. We shall see…

How Easy Is It To Start Using TONEX? 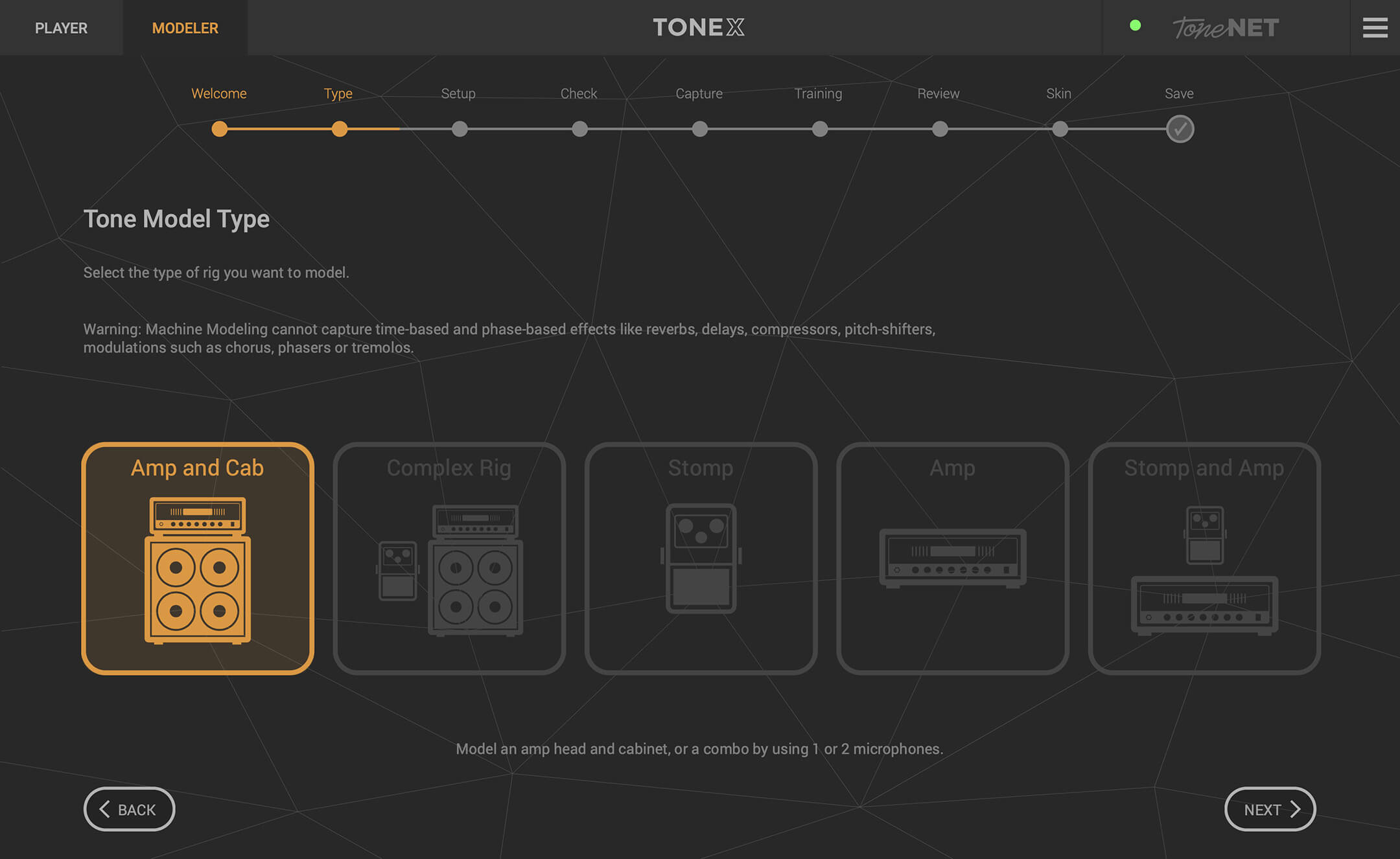 Following a quick installation of the Mac software, we’re confronted with an uncluttered interface of which we’re able to decipher without extensive use of the manual. The top menu allows us to toggle between using TONEX in ‘Player’ or ‘Modeller’ mode. Further to the right we have the settings button, used to enable the identification and routing of our soundcard’s inputs and outputs. This top bar also features access to ToneNET.

The second row concerns our signal chain. First in line is the ‘Advanced Parameters’ button which as its title suggests concerns the advanced parameters of the ‘Amp Model’. The vast majority of these feature on the amps’ GUI below, though there are a number of specialised knobs such as ‘Mid Q’ – a knob that sets the q of the mid frequencies. Next is a noise gate followed by a compressor in ‘PRE’ position (in front of the amp and cab modules), then follows the amp module and cab module, and a slot for a compressor in ‘POST’ position. Bookending this chain are the input and output meters

The next row is the ‘Amp View’ which features a graphical representation of the amp model selected. The default loaded ‘Black Angus’ model with his familiar black and gold hardware give us a perfect indication of its influential provenance. In this area you we can choose to set dials in the traditional, albeit virtual way,

The last row is the ‘List view’ which lists all the available Tone models and presets. Nine columns detail the specifics of the model such ‘character’, and ‘amp’ and they can be filtered and searched to hone-in on specific tone types.

To the right are collections of amps such as ‘modern boutique’ and ‘Brit 30 Classic’ and selecting one of these populates the models included in the ‘List view’. 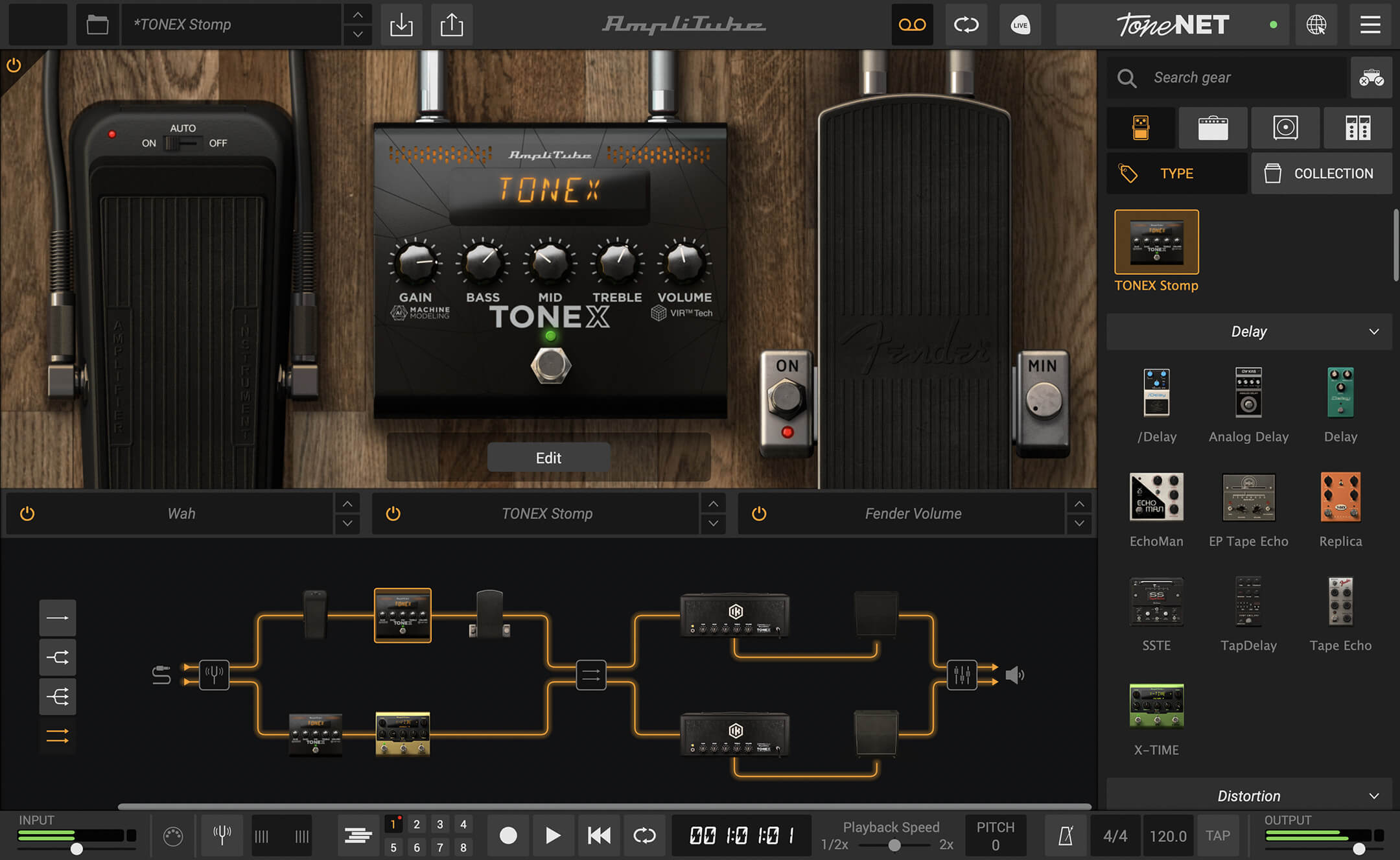 We plug into our soundcard and immediately seek out the Plexi collection. While we’re greeted with its trademark crunchy overdrive, we are a little underwhelmed at this first Plexi-style Tone Model encountered: the crunchy doesn’t feel crunchy enough and its distinctive treble has been curtailed a little. However, as in the analogue world, the signal input has a significant effect on the sound from the amp, so we turn up the gain on our soundcard things begin to cook. Voila – we are in Plexi territory! The soundcard’s gain is crucial is seems and a guide to optimum input level would not go amiss here, as we see bundled in with STL’s plugins for example.

A/B’ing our own Dual Rectifier through a UA Ox with the TONEX profile reveals the profile to have captured all the trademark low end flub and rich power section of Dual Rec. We often use an overdrive in front of the amp to focus and tighten up the low-end but unfortunately, unless the Tone Model has been profiled with a stomp box already, we can’t add one in the chain. Fortunately, we have two remedies. The easiest and quickest is to simply to connect to ToneNET and use the search function to seek out a user’s Tone Model based on our requirements. Within seconds we have a number of models to choose from and the one we select immediately provides authentic Black Album style heaviness.

How do you capture your amp sounds using TONEX? 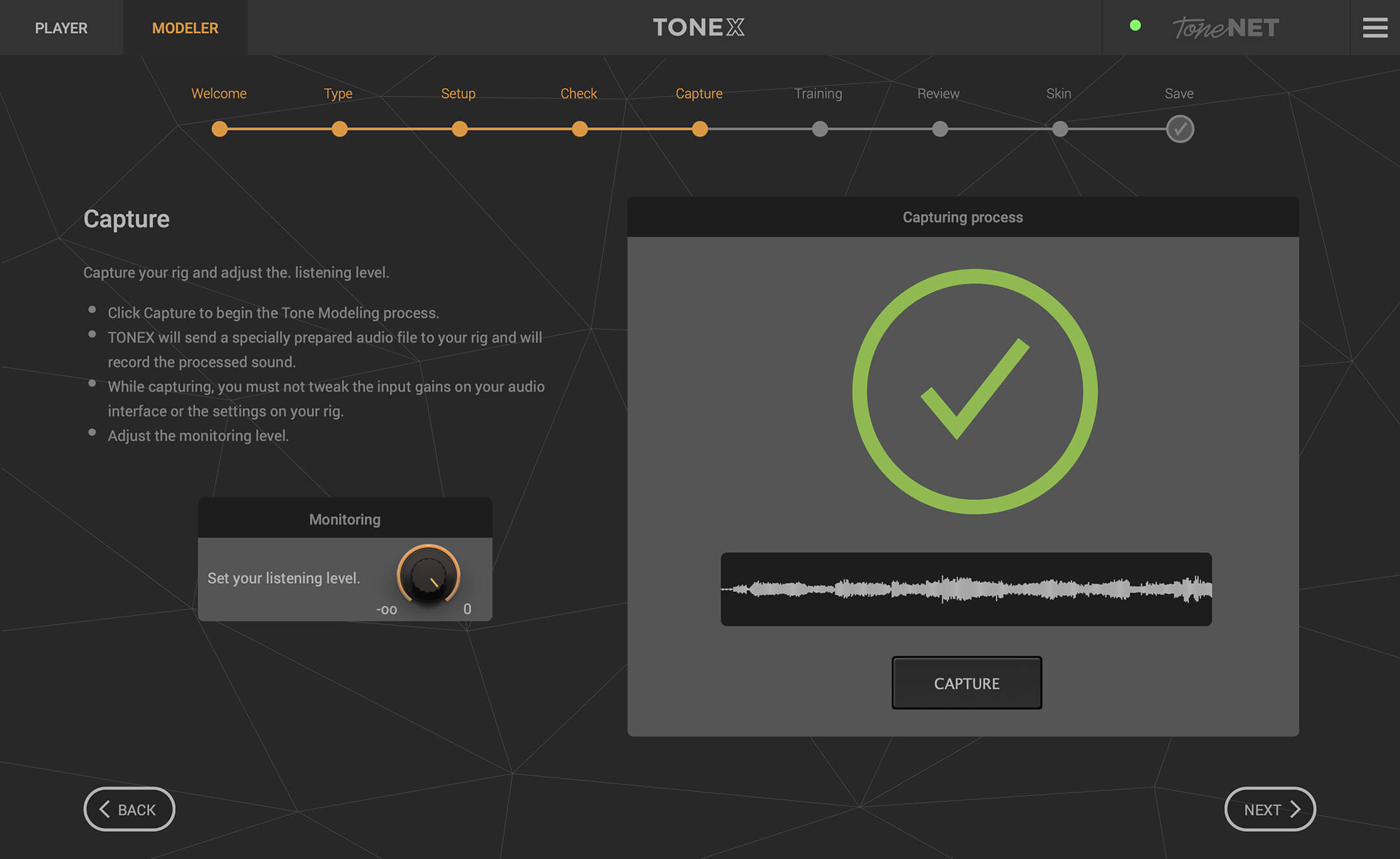 The second remedy is more labour intensive but potentially much more fun – it’s time model our own Dual Rectifier using the TONEX’s AI. Although IK states that ‘custom hardware is not required’ to do this, in practice a re-amping device is necessary, and if modelling the cab as well the amp, so are good quality microphones. We used Radial’s X-AMP Active Re-amper to capture our model, but if you don’t have something like that kicking around you may need to factor that into your expense calculations.

The TONEX modelling software offers five different modelling options: Amp and Cab; Complex Rig; Stomp; Amp; and Stomp and Amp. Not wishing to make things easy, we choose the ‘complex rig’ option right out of the gate in order to to profile a Dual Rectifier with TS-808 in front, going through a Cornford 2×12 cab with Celestion V30s.

After making all the countless connections from the hardware to the Radial, we follow the step-by-step on-screen guide and complete the profiling process. We A/B the results against a previously direct recording of the amp and we have to say, we are mightily close to the real thing. The only discrepancy is ours is slightly weightier in the bass department. Still that’s very impressive.

What’s less impressive is the time it takes to capture a profile – it took us the better part of 90 minutes to do the whole thing, which in today’s world of short attention spans feels like an eternity. On the plus side you can still use the player portion of the program while it’s working, but it still feels positively glacial – especially compared to the quick job a Quad Cortex would do with the same rig. There are faster options available, but with the sacrifice of fidelity of the modelled sound – and who in their right mind is going to pick the option that sounds worse? 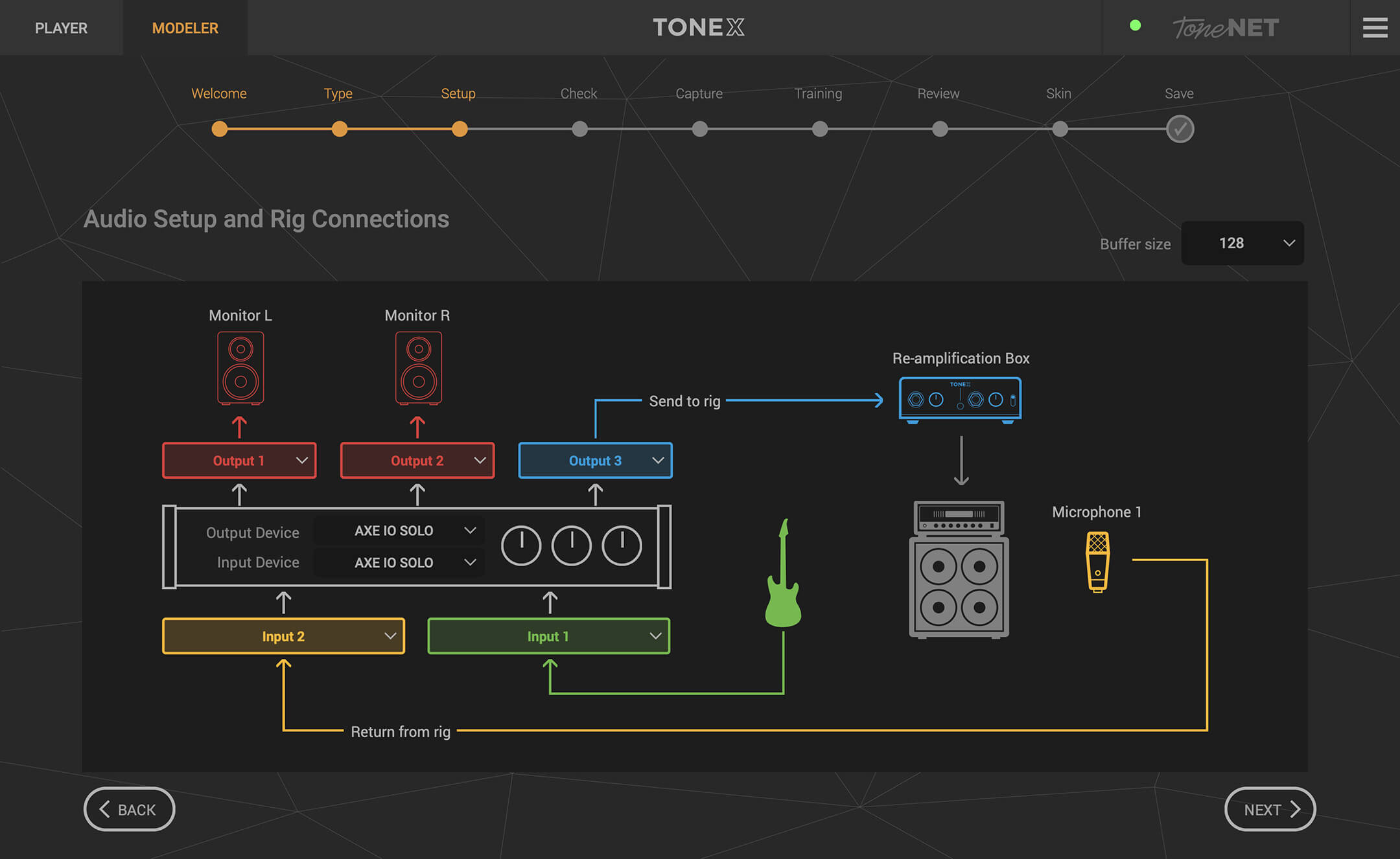 The amp sim plug-in market is thriving, and while they might not model real world gear like TONEX does, for many users who don’t even have an amp to model the difference will be academic. Simply put, there is a huge amount of competition out there for TONEX from the likes of STL, Positive Grid and Neural DSP if you’re just looking for a great sounding digital amp to record and play through. There’s also a distinct lack of available effects within the TONEX environment, limiting you to just compression and reverb. Of course, this isn’t a problem when you plug TONEX into IK’s hugely popular AmpliTube software  (or using it as a plugin to your DAW of choice) – and pairing the two opens up a world of complex rig opportunities. While some will be happy with the 10 basic effects offered by the free CS version of AmpliTube, for most of us that will mean additional expense in some form or another.

And that is the slight sting in the tail of the TONEX offering. It may be a sixth of the price of a Quad Cortex or a Profiler, but it’s also not as cheap as it might initially appear to do what you want to do with it. When you add in the cost of buying a re-amping unit it, and potentially the cost of AmpliTube or something similar for the effects, it pushes that price up considerably, while also adding extra layers of hassle. IK’s TONEX Capture hardware unit streamlines some of this faff of course, but that’s another €250 expense.

All that being said, it doesn’t take away from the fact that TONEX offers you the ability to profile your own rig, with the added bonus of a wealth of professional quality tones on offer, for a price that is vastly more affordable than the competition. Impressive stuff.