Northampton’s finest has overhauled its best-selling range for 2019. Here, our attention turns to a 20-watt combo with a low-power mode that will hit the sweet spot for many players. 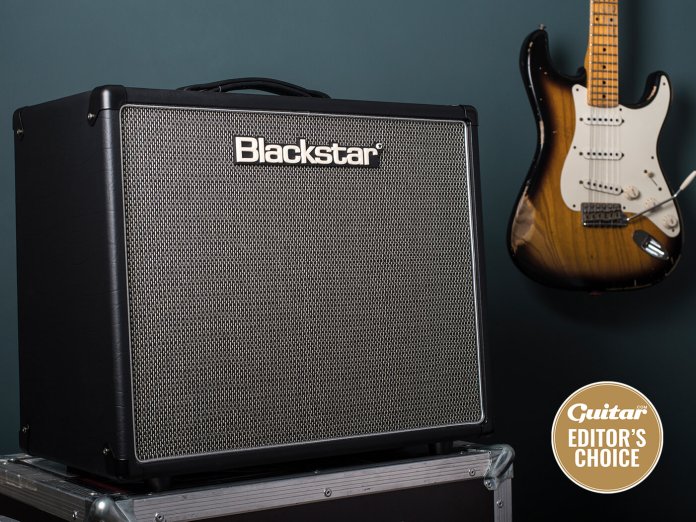 Replacing Blackstar’s HT Studio 20, this 1×12 combo carries a handful of features over from its predecessor – then adds quite a few more in the shape of footswitchable alternative voicings for each channel, emulated USB, headphone and XLR outputs, plus a switchable power output to facilitate driving the twin-EL84 power section hard at sociable volumes.

Along with its facelifted retro-British styling, the control panel has been relocated to the top of the cabinet for easier access when reaching down to tweak settings from a standing position, as many users certainly will. From left to right, there’s a single quarter-inch jack input, then the clean channel’s volume control. Then we find the clean channel’s two-position voice switch, for selecting the basic character of the tonestack – more on this later. A single tone control allows for fine tuning of the selected voicing.

Next up is the OD select button. Like the voice switches, this can also be activated with the supplied two-button footswitch. As with the clean channel, we have gain, voice select and volume, but a much more detailed EQ section, featuring the usual bass, middle and treble, plus Blackstar’s patented ISF control, for advanced shaping of the midrange character. The digital reverb and master volume controls are positioned immediately to the right, followed by another switch for selecting either two or 20 watts output, then finally, the sturdy metal power switch.

The rear panel offers a similar level of versatility. After the mains input on the left, there’s a range of possibilities for connecting external speakers, as an alternative to the in-house-designed internal 12-inch unit. The options are single eight- or 16-ohm, or twin 16-ohm, so you can run this combo through two 4×12 cabs if you so wish.

If you’d prefer to appease the sound technician by going direct into the PA system, there’s an XLR connection next in line, offering the choice between 1×12 or 4×12 cab emulations. These are also effective when using the headphone output found close by. An MP3/line input facilitates playing along with backing tracks, followed by a mono effects loop with a +4 or -10 dBV level switch, so rack or stompbox effects can work equally happily. After the footswitch connection socket, last in line is the USB audio connection, compatible with any recording platform and offering stereo cabinet emulation with reverb.

Firing up the clean channel, voice one delivers a wide band, American-style tone with lots of headroom – though when pushed hard with the volume and tone controls, it will eventually start to break up at the edges. There are plenty of usable tones here, beautifully enhanced by the well-voiced digital reverb.

If edgier tones are what you’re after, press the voice button (or footswitch) and the bright-green light tells us we have selected voice two. The tone takes on a much edgier ‘British’ character, with added high mids helping to push the amp into a natural overdrive slightly earlier on the dials. There’s a wide choice of flavours available using both humbuckers and single coils, and it’s particularly gratifying to be able to access these sounds via the two-watt setting, at what could just about be considered bedroom levels!

Selecting the OD channel, the amber light illuminates, and we now have access to the gain and EQ section, really making the most of those two ECC83s in the preamp. Voice one offers a smoother, slightly lower gain range (though there really is plenty here for most applications), which can be comprehensively shaped via the EQ and ISF controls. There’s no presence control, but the treble and ISF do a pretty thorough job, so there’s plenty of choice when shaping the high frequency character and ‘cut’.

Selecting voice two ignites a red LED and the gain is moderately boosted; there’s extra high-mid detail and what Blackstar describes as a “looser, more aggressive sound due to reduced power amp damping”. We’d concur, but add that in practical terms, the net effect is very much like driving an older valve head with an overdrive pedal in the time-honoured style, so there’s plenty of focus for modern metal riffs.