Blackstar has teamed up with the singer-songwriter Jon Gomm to create a smart new solution for gigging acoustic musicians.

Successfully amplifying your beloved acoustic guitar can be a considerable challenge for players at any level. Acoustic instruments have sensitive souls and the kind of kit capable of doing them justice (namely high-end microphones, preamps and hybrid pickup systems) can often be a bit beyond the fiscal range of most gigging players.

Cue Blackstar Amplification. The Northampton company has collaborated with British singer-songwriter Jon Gomm, one of the world’s most gifted and tonally demanding acoustic guitar players, to create the Sonnet series. More information on the R&D process is revealed in our interview with Gomm but, here, we’re taking a close look at the 60-watt model, in a dapper combination of cream and copper. More traditional black cosmetics are also available, as is a 120-watt model (£479) with additional features, including effects loops and phantom power. 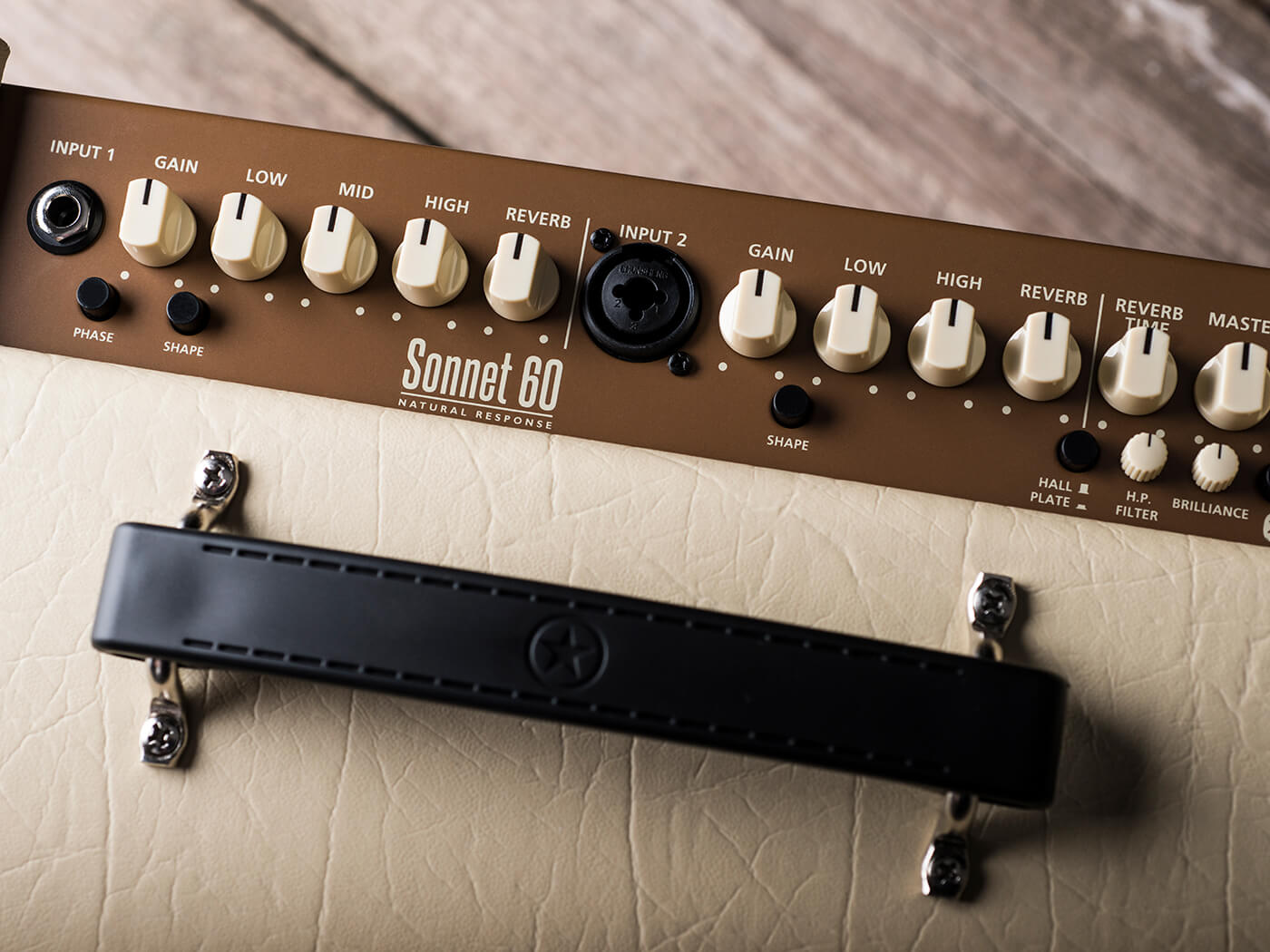 The Sonnet 60 is a twin-channel amp, which in the acoustic world means you can run two input sources through it, rather than there being different gain stages. Channel one has a jack input and an independent gain knob, and features a three-band EQ alongside a reverb knob with which to dial in either plate or hall-flavoured ambience. Channel two features a combination jack/XLR input and forgoes the three-band EQ in favour of low and high knobs. Both of the channels feature a ‘shape’ switch, which provides a mid-scoop when engaged.

More experienced acoustic-amp users will have noticed the control layout’s resemblance to the venerable AER Compact 60, which has been the industry standard for many years. There are, however, some subtle differences, such as the Sonnet’s high-pass filter and brilliance controls, low-latency USB out, Bluetooth connectivity, and global phase switch to help prevent feedback.

We start with an undersaddle-pickup-equipped Takamine which, while not known for its subtlety, certainly proves the Sonnet 60’s capabilities when dealing with the spiky transients typical of piezo systems, giving us a strummed sound that’s almost quack-free.

Next, we introduce a nylon-string wildcard in the shape of a silent Yamaha SLG-100, which sounds better through the Sonnet 60 than our usual (and considerably pricier) gigging amp, and brings out all the beauty of nylon-strung bossanova. The neck humbucker of a Gibson L-5 confirms our initial impressions of the Sonnet 60 as an exceptional amp for jazz: the sound is warm and detailed, with extended chord harmony and fast runs coming through clearly.

Finally, we plug in a supreme example of the luthier’s art, a Kostal Modified Dreadnought in mahogany from The Tree and German spruce. Usually, we would use an external condenser mic when amplifying this guitar but, in its 60-watt form, the Sonnet does not offer phantom power (you’ll need the Sonnet 120 for that). That said, it does a splendid job of reproducing this instrument’s huge natural sound, taming the passive K+K Sound pickup’s upper-midrange hump and bringing out much of the immediate response and full sonic spectrum typical of a good modified dreadnought.

The Sonnet 60 is a strong performer by any standard but its competitive pricing
(less than half that of the AER Compact 60) makes it even more attractive.