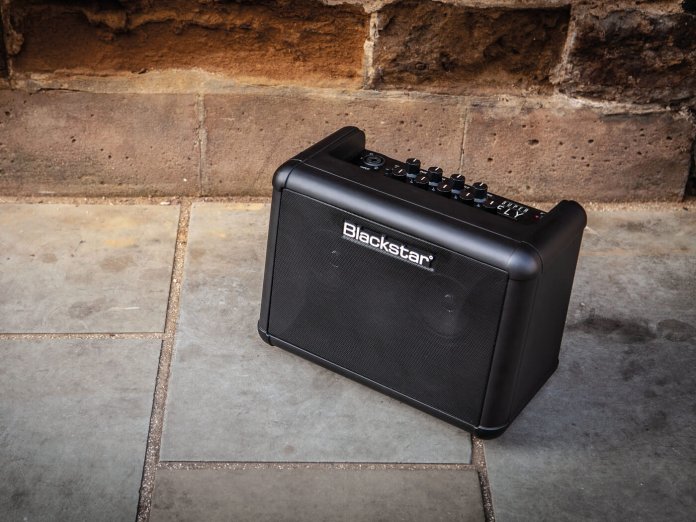 The big brother of Blackstar’s game-changing Fly 3 mini-amp, the Super Fly is aiming to bring some of that Fly magic to buskers, street performers and open-mic’ers. Roughly double the size of its forebears, the Super Fly also sports twice as many three-inch stereo speakers and, at 12 watts, four times the output power.

While many modern digital amps are too complex for their own good, the Fly’s brilliance was its simplicity and stellar tones that belied the tiny form factor. While the larger Super Fly is simple and straightforward, there’s obviously more going on here.

So we get two separate instrument inputs – a standard jack for electric and acoustic guitar, and an XLR combo input for mics and line-level instruments – each with their own volume, two-band EQ and control for the digital reverb, while the guitar side adds a switchable overdrive channel and a gain knob. There are also 3.5mm line-in and Bluetooth options for playing over backing tracks – something solo performers are increasingly making use of.

In front of the control panel, there’s a recessed hand grip for one-handed carrying, while the bottom of the cab sports a small kickstand. Power comes courtesy of eight AA batteries, or you can fork out for the optional PSU-2 power supply to keep you plugged in at home. If it’s optional extras you want, the Super Fly offers everything from the Super Fly ACT powered extension cab and a padded carry case, to a portable battery pack and a top-hat PA stand adaptor.

This is the first Blackstar amp in recent memory without the company’s ISF mid-shaping control, but upon plugging in an electro-acoustic, we’re glad of the two-band EQ. With the tone controls both at 12 o’clock, the bass is a little unbalanced and we instantly reach for the treble to even it out. It’s the same story when plugging in a Les Paul on electric mode – this thing certainly isn’t lacking low-end punch.

With the EQ tweaked, things are much smoother and it’s apparent that the Super Fly shares the same space-filling characteristics as its forebear, even at low volumes. Turning up the wick, things remain clear and articulate almost until the very end – with impressive volume and projection. You’d easily be heard over a busy open-mic night, café gig, or even a polite drummer.

Electric-wise, cleans are punchy and sweet, while the all-out distortion of the OD side has no business sounding as good as it does through such a small cab. The reverb, on the other hand, remains very polite and with a very short decay, even when cranked to max – don’t expect instant spaghetti-western tones.

Plugging in a mic, the stereo speakers cope well with voice and guitar in unison and adding a Bluetooth backing track doesn’t muddy the waters. There’s some background hiss when you’re not playing, but that won’t matter a jot when you are and it isn’t noticeable through the headphone out.

Anyone wanting a beefed-up version of the Fly won’t be disappointed, but this offers plenty more besides. With great sounds, easy portability and a seriously competitive price, the Super Fly instantly takes its place at the top table of go-anywhere performance amps.