If you’re Hughes & Kettner, there’s only one way to improve on a programmable 200-watt amp with valve-emulating analogue tone and on-board effects: turn it into a stompbox. 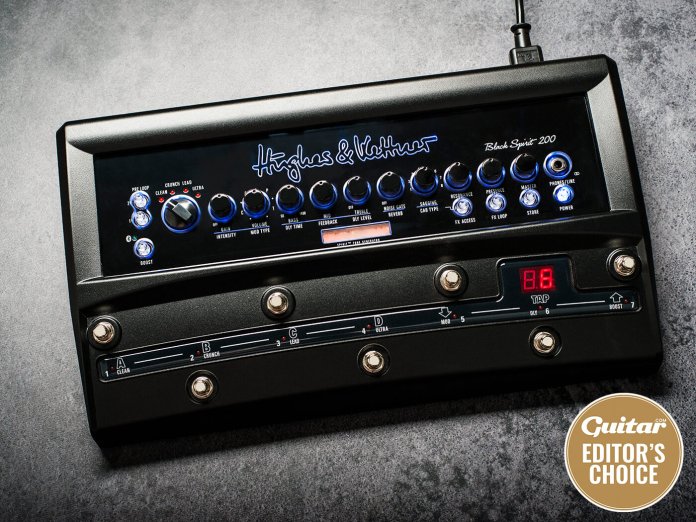 It’s obvious when you think about it. Why bother having a separate multi-channel amp and foot controller when, with the benefit of an analogue tone-generating tech solution that doesn’t require the bulk of real valves, you can plonk the whole thing on the floor?

That’s the thinking that led Hughes & Kettner to design this pedalboard version of its 200-watt Black Spirit head. It looks like a standard multi-effects unit, maybe with some preamp and speaker emulation options; but no, the H&K Black Spirit 200 Floor isn’t an alternative to your amplifier – it is the amplifier. Which just leaves two questions: does it perform well enough to replace your usual heavyweight head… and how long is your speaker cable?

Setting aside the minor practical issue of having your amp at the front of the stage (while your cab is presumably at the back), the basic specs suggest this device isn’t so much a Swiss Army knife as a Red Army tank regiment, with the power and range to cover most players’ needs both live and in the studio. That’s not least because of its 200-watt output, which is switchable down to 20 or two watts and is accompanied by a DI out with eight cab emulations. 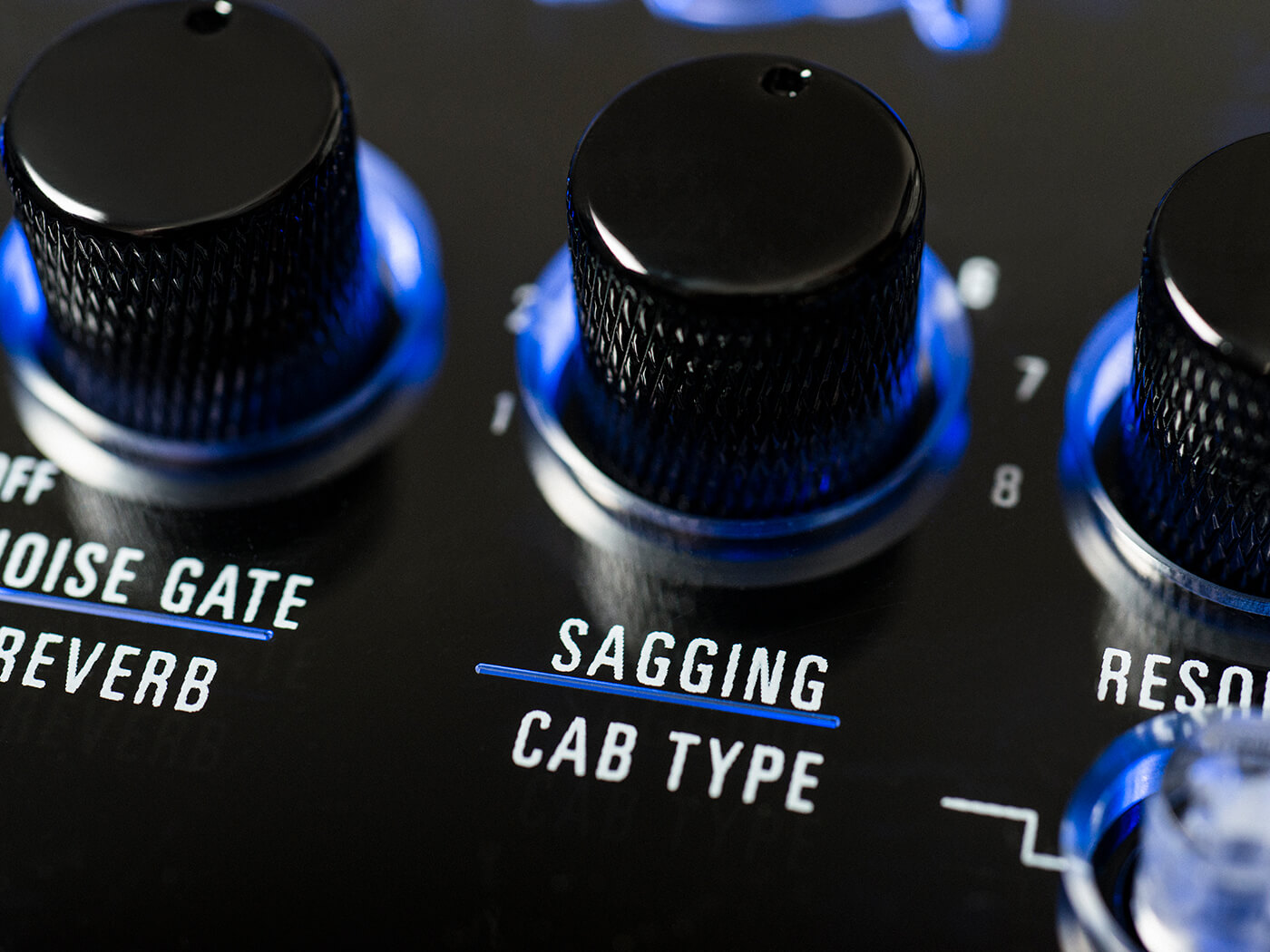 And it’s programmable – with 128 editable presets – but it’s analogue, with H&K’s proprietary Spirit technology claiming to recreate the tone and feel of valve-based circuitry in a much smaller, lighter format. We don’t know exactly how the tech works, but we do know where it lives thanks to the mysterious glowing orange bar right in the middle of the unit.

The footswitches can be used in three different ways: preset mode has you scroll up and down through 32 banks of four sounds each (selectable via switches A to D); stompbox mode engages straightforward channel switching (clean, crunch, lead and ultra plus three effects); and ‘direct 7’ mode lets you assign seven favourite presets and flip between them.

In terms of connectivity, you’re properly spoilt – this thing’s got more holes than a vintage Emmental. The back panel’s most important features are two speaker outs plus an effects loop and H&K’s familiar Red Box DI module, while the guitar input is on the left edge of the unit along with ins and outs for, unusually, two more effects loops. These are ‘pre-everything’ – the idea being that pedals you wouldn’t want to put in a post-preamp loop can be switched in and out en masse using the Black Spirit’s presets. Finally, on the right side, next to the footswitch mode selector, there are two inputs for expression pedals. 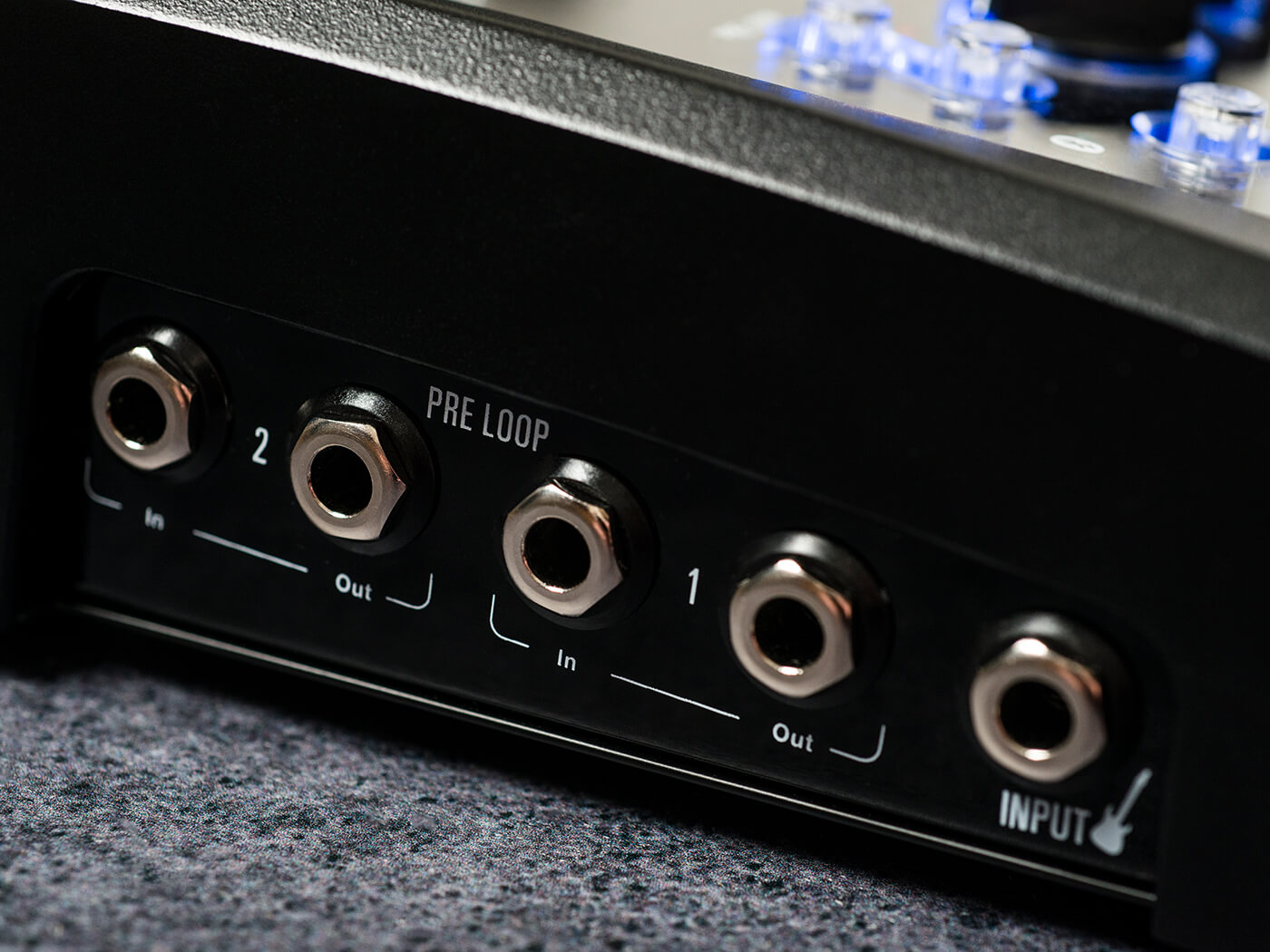 Now we come to the controls. The key feature to note here is that seven of the knobs are dual-function, controlling either amp settings or, when the ‘FX access’ button is engaged, effects. There aren’t many of those – it’s really not the focus, as you might have guessed from the inclusion of all those loops for your own pedals – but you do get a full set of three controls for the delay, while the modulation dials allow a limited amount of adjustment within each of the four types: chorus, flanger, phaser and tremolo. There’s also a boost, which is voiced differently according to the selected channel but is fixed for level.

Arguably the most interesting controls are those marked sagging, resonance and presence – these mimic the variable characteristics of valve output stages, letting you alter the overall character and responsiveness of the amp.

And there’s one more feature to mention: Bluetooth. Yep, in theory you can control the Black Spirit 200 Floor via an Android or iOS device. We say ‘in theory’ because ours refused to connect to either; but honestly, we can’t see that there’s any genuinely useful functionality here, other than the ability to give funny names to your presets. 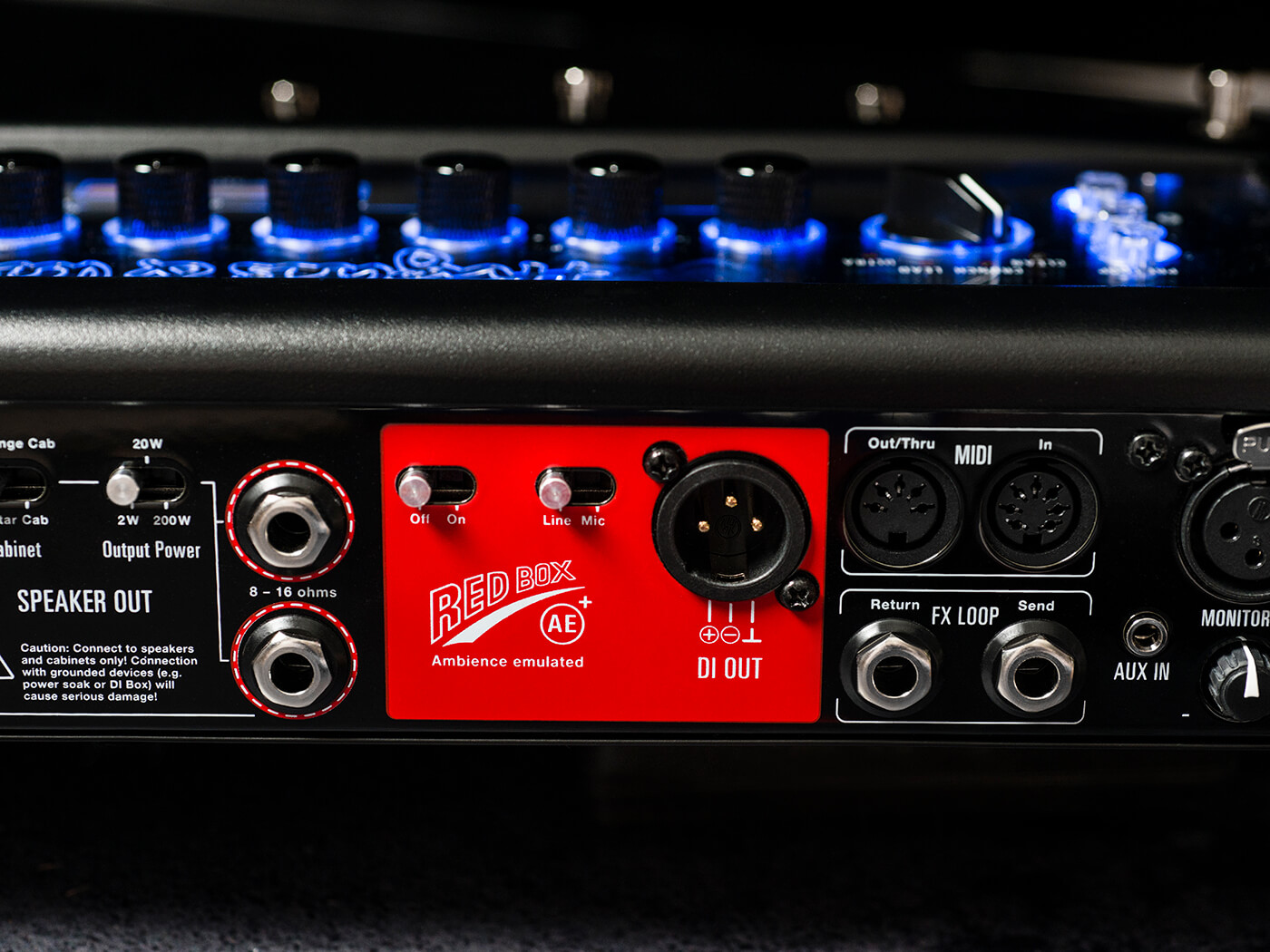 Pretty much everything on the Black Spirit 200 Floor can be assigned to presets. So you can set it up to hop from a clean tone with light tremolo to a high-gain scream with phaser, delay, boost, less sag, more presence… and all 15 of the fuzz pedals in your effects loop switched on. That’s an extreme example – please don’t feel obliged to try it out – but you get the idea.

Inevitably, most of the factory presets sound over-processed and really not very nice. But they’re easily edited – and the core amp sounds are remarkably good. Ideally, you’d have a wall of cabs to do them all justice, but even through the same 1×12 you could easily lose an afternoon scrolling through Blackface-style cleans, rock-riffing crunch tones and many, many flavours of shred-friendly high-gain indulgence.

Maybe the cleaner stuff doesn’t quite stack up to the very best in terms of purity and touch-sensitivity, but it’s more than decent – and those extra controls for the output stage are a genuine bonus. Presence crisps things up in the usual way, sagging lets you dial in authentic squishy saturation, while resonance allows the low-end to be as loose or tight as you want it. It’s all very ‘valvey’ and makes this just about the most versatile non-digital amp we’ve ever used. 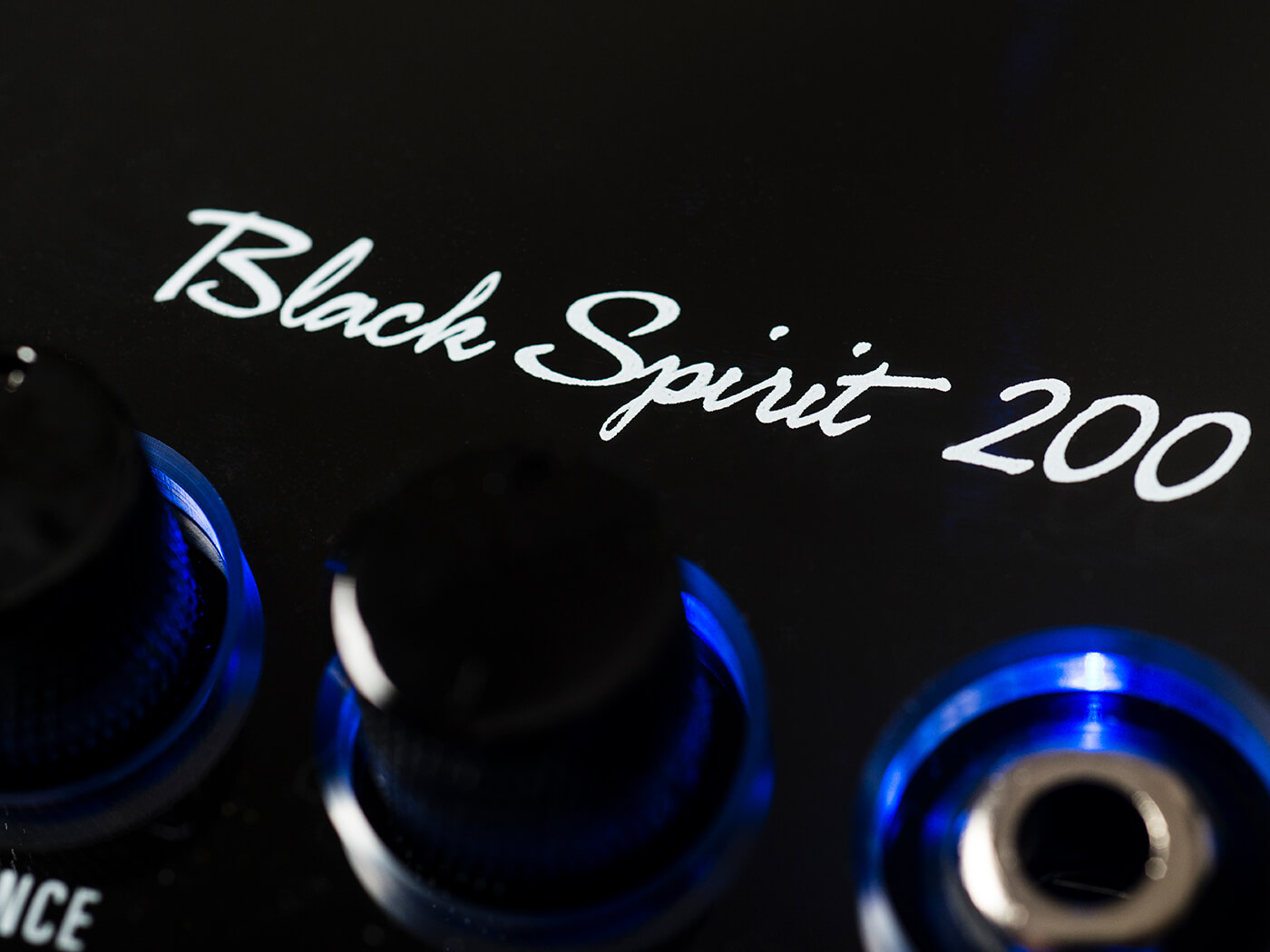 Of course, not everyone insists on plugging into a cab – which is where the Red Box output comes in, either for direct-to-PA live use or as a silent recording tool. And H&K’s little circuit sounds better than ever with that eight-way ‘cab type’ control. All the bases are covered, including four different 4x12s, and all eight are distinctly useable.

The only potential snag with the Red Box is that it doesn’t do instant switching – new sounds actually fade in after a moment of silence. We’re guessing this is a safety measure to protect PAs from sudden leaps in level, which is a thoughtful touch but does mean DI isn’t really an option for mid-song channel-hoppers. Thinking you could get away without that extra-long speaker cable after all? Sorry!