After five years of R&D, British blues guitarist Aynsley Lister’s quest for “my sound, in a box” has been fulfilled. We get the lowdown from Aynsley and Rift main man Chris Fantana and put the results of their collaboration through its paces. 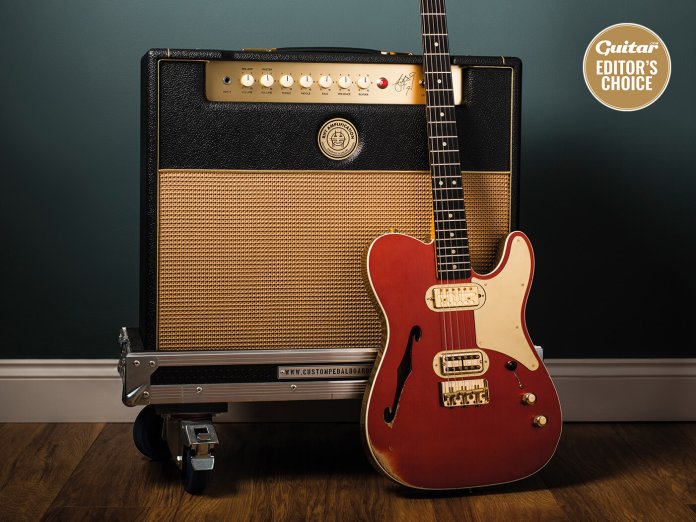 Like many of the best things in life, it all began with lunch. Aynsley Lister has been a customer of Rift Amplification’s Chris Fantana for a number of years, bringing in various pieces of vintage gear for service and repair. “We started talking about doing a signature amp over lunch one day and what that might look like, what tones it needed to capture,” Chris remembers. “Crucially, it needed to offer Aynsley the touch response and feel that he wanted, being one of the handful of guitarists who rarely, if at all, uses pedals.”

Initial inspiration for the circuit came from Bletchley, via Switzerland. “Aynsley found a very rare 1979 Marshall JMP 50-watt 2×12 combo, model 2144, in a music shop in Switzerland,” Chris reveals. “The 2144 is unique in that it was one of only two Marshall amplifiers from that era to have onboard spring reverb, the other being the 100 watt head, model 2959.

“A few years later, he took it into Marshall for a service and the tech looked at it and proclaimed: ‘That’s not right, at all!’. It had, as he then discovered, been modified away from the original circuit in the past. Incredibly, these modifications are not that well thought out, nor engineered in a particularly learned way. They were most likely done in a hurry to get the amp working again when it was on the road, using parts available at arm’s reach and the like.

“I cannot imagine any circuit designer deliberately choosing to operate the circuit in this way, yet it works wonderfully. When asked if the amplifier should be returned to its factory specification, the answer was of course, no. A/B’d next to a stock 2144, the differences are immeasurable. The modified amp sings in a way that the stock model cannot. The harmonics seem to jump out of the amp with incredible ease, the clean tones are not that far away from the big-wattage Blackface Fenders of the mid 60s, yet the overdrive tones certainly nod their head back towards Plexi.”

Chris and Aynsley agreed that using this modified Marshall as a foundation would be an excellent starting point, but there was room for improvement. “I think it’s worth pointing out that the modded 2144 isn’t the perfect amplifier,” Chris says.

“We wanted to work on the areas where we felt it could be improved. We noticed that at low volume settings, the amp can become quite bright, so adding a bright switch is a simple yet extremely effective change, along with the added benefit of improving the amplifier’s ability to take pedals and therefore be an excellent pedal platform. We also added a switchable series effects loop for users of time-domain effects.”

Real-world testing played a huge part in the R&D, with Aynsley “road-testing the life out of” a series of prototypes. “I remember he once phoned me during the interval of a show in Germany to tell me the mids weren’t quite right!” Chris laughs. “Whenever he would come to the workshop, we would A/B against his modified 2144 to see if the tone had changed, either for better or worse.

“We spent a lot of time trying various values of resistors and capacitors trying to get the amp to sound and play the way we wanted. Interestingly, the components in the signature amplifier aren’t all the same as his modded 2144, yet the tonal signatures are frighteningly similar.”

Although the vintage Marshall 2144 is a 50-watt amplifier, Aynsley’s signature model is rated at a more practical 35 watts. “These days, onstage volumes have been brought down a lot,” says the guitarist. “Even in smaller clubs, it’s normal now for everything to be mic’d up. Of course, when an amp is cranked, there’s lots of things coming into play here – the speakers are shifting some air and maybe compressing a bit, the valves are nice and hot and the whole thing is alive.

“It’s always going to be a compromise, but in a lot of venues now, having an amp cranked is just not possible. So I needed to make sure it still sounded good at lower volumes, that it would still sound fat and still have the harmonic qualities and not sound thin at all.”

And when it comes to volume, the way the amplifier interacts with the guitar’s onboard volume control was of huge importance. “I use the volume on the guitar a hell of a lot to vary between clean, crunch and full-blown overdrive,” Aynsley reveals. “A lot of the time, when I’m playing rhythm stuff, the guitar’s on about three, for a nice kind of clean tone. And then, when you bring up the volume, it’s almost like an overdrive control for me, so I don’t want a massive change in volume.

“What I’ve found with a lot of amps I’ve tried over the years, when you’ve got the guitar on full, it sounds great. But as soon as you turn the volume down from 10, the whole thing just falls flat. One of the big things for this amp was to make sure it responds to the volume well.”

Aynsley’s signature amplifier also features a bespoke reverb circuit that accentuates the mid-Atlantic accent of the modified Marshall from which the Rift design drew inspiration. “I think it fair to say that the West Coast spring reverbs of the 60s are the benchmark,” says Chris, “and those from this side of the pond have always lacked somewhat, whether it be depth, space, decay, or they are simply just dull.

“The downside of the Fender reverb is that unless you want the surf sound, you’re really limited to no more than three on the dial. I developed a unique reverb circuit for this amplifier using just a single valve, the low-gain 12AY7 usually found in the front end of tweed Fenders. This allows me to send a higher percentage of the guitar signal through the circuit, without overdriving the reverb tank.

“This allows the player to get a huge depth and space across the whole dial range, without ever becoming splashy or getting in the way. We had to design and have manufactured a high-impedance custom reverb transformer, as nothing was available off the shelf that would allow me to under-drive the tank in this way.”

With a head, 1×12 and 2×12 combos and matching extension cabinets available, there’s a format to suit a variety of applications. For the purposes of this review, however, we’re taking a look at the 1×12 combo.

Echoing the boutique cosmetics of Fantana’s other original amplifier design to date, the Hawker, the black-and-gold colour scheme here is especially smart in combination with wheat basketweave grille cloth and cream ‘cupcake’ knobs. The Baltic birch ply cabinet has been dressed expertly in black textured vinyl (white is also optional) and the build quality is even more impressive inside the chassis. Chris’ characteristically orderly wiring sees the lion’s share of the components neatly spaced out on one central board, with a satellite PCB purely for the series buffered effects loop.

Cable ties keep everything tidy, and in the unlikely event that anything should go wrong, all Rift amps come with a lifetime warranty for the original owner. The power valve complement comprises a pair of JJ EL34s, while the preamp features a 7025 dual high-gain triode, a pair of ECC83/12AX7s and a 12AY7. The 7025 is a close cousin of the 12AX7 that was developed by RCA to be quieter and more robust, shortly after the Second World War.

“The 7025 low-microphony preamp valve is used in the first two gain stages of the amplifier, sitting either side of the preamp control,” Chris explains. “Each stage produces quite a large amount of gain, yet does so in very different ways to help shape the harmonic content of the preamp.

“The idea here is to amplify, EQ, and attenuate the signal as carefully and as controlled as possible so the following stage, the tonestack, can work on the frequencies that we choose without taking away from the unique sound of the amplifier.”

Rectification is solid state and should you crave additional ambience beyond the valve-driven onboard spring reverb, the aforementioned effects loop provides not just quarter-inch send and return jacks, but also an on/off mini-toggle and an FX level control. It’s also footswitchable, and can act as a useful additional level boost or cut.

The front panel is all very self-explanatory, with the bright switch accessible via the push/pull pre-amp volume control. The circuit was specially tuned to work with Aynsley’s preferred 12-inch speaker, Eminence’s The Governor, an efficient 102.3dB ceramic driver that Eminence describes as “a versatile guitar speaker that’s great for Southern rock or blues.” Time to hear it in action…

Although Aynsley gets most of his light and shade by riding the guitar’s volume control, it’s important to emphasise Chris’ earlier point that this is an amplifier that’s equally valid for pedal junkies.

Aynsley and fellow Brit blues-rocker Chris Buck demonstrated this at the amp’s public unveiling at The Guitar Show in Birmingham, back in February. The pair showed how two players with different approaches could make the amplifier sing just as sweetly, whether their lead tones were sculpted by pedals or the amplifier alone.

Back at Guitar.com HQ, the quality of the guitar playing might not be nearly as stellar as that of Lister or Buck, but we find instant gratification by plugging straight in, sans stompbox effects, and bathing in harmonically rich, dynamically responsive cleans with a gorgeous halo of reverb that augments rather than dominates. Plug in a decent Strat, flip to the neck pickup and be prepared to lose a few hours – if the Rift just did this and this alone, we’d already be sold.

Switching over to an ES-335, the experience is similarly joyful, and it’s also noticeable that Aynsley’s comments about how responsive the amplifier is to your guitar’s onboard controls ring true, even at relatively clean settings. If you want to roll back your guitar’s volume and enjoy noodling around in the onboard reverb at home friendly levels, you can. Mains hum becomes a little more audible in this context, but it’s not intrusive.

Pulling the pre-amp volume control rolls off some highs if they are too much for you, but we find that winding back a couple of notches on our guitar’s tone control is more than sufficient, as it retains much of all that lovely harmonic content in the treble frequencies.

Turn up the pre-amp volume and the circuit starts to fatten up; we begin to hear some of the rounder, creamier tones that we heard from Aynsley back in Birmingham. Wind up the wick even more and the amp’s vintage British blues and classic-rock DNA is impossible to resist, but your guitar’s controls still give you several gears within that realm, with clarity and juicy harmonics intact. In addition, the level jump from clean to dirty when you ride the guitar’s volume is about perfect for the transition from raunchy rhythm to singing lead in a band scenario.

Chris and Aynsley have created an amplifier that covers an awful lot of ground, from characterful cleans with a Californian twang, to a trip through late-60s London at the moment when pop got the blues and rock was born. It’s even excellent for rootsy Americana, too. The brief might well have been to deliver Aynsley’s sound in a box, but there’s plenty of scope here to find your own voice. Impressive.