An all-valve combo with tone-tweaking options worthy of a modelling amp? 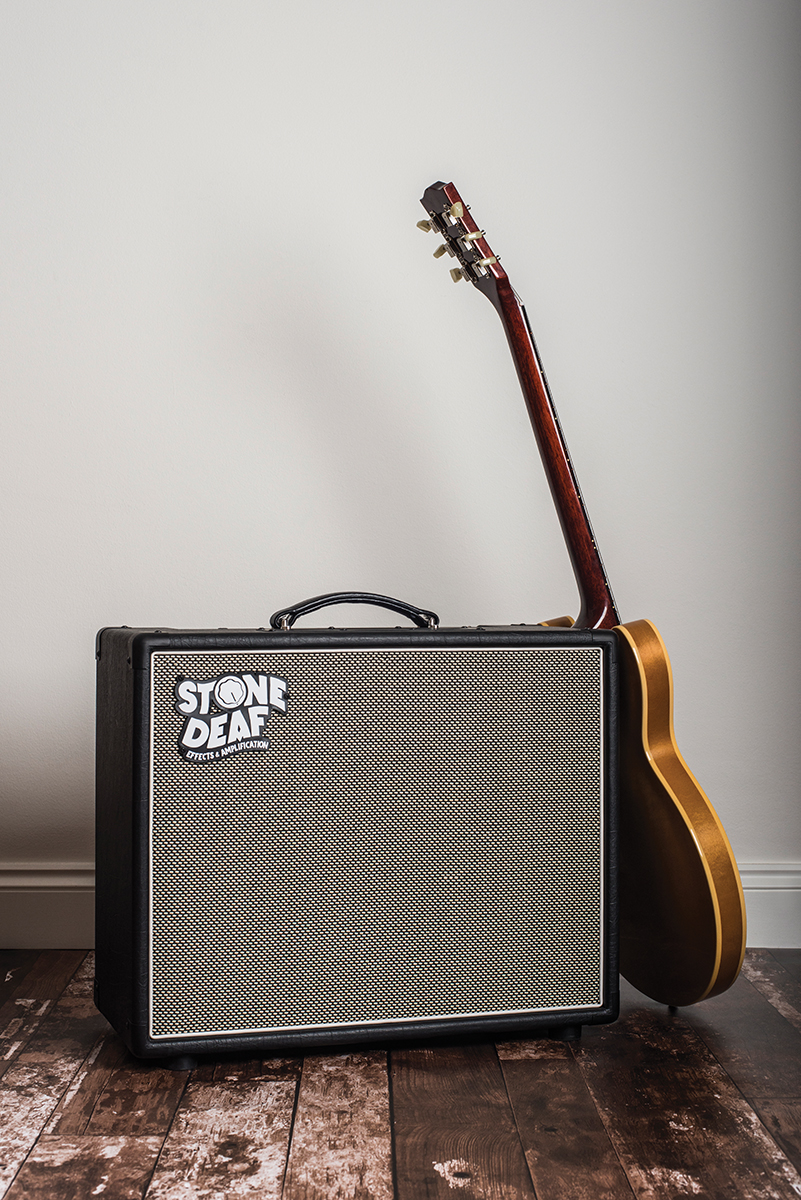 As any drummer will tell you, Hegelian dialectic involves fusing an existing theory with its antithesis in order to establish a new paradigm. Well, the designers at Stone Deaf must be big fans of German idealist philosophy, because their amplifiers are about as Hegelian as they come.

The general theory is that amps should be all-valve and all-analogue; but modern digital technology is better for flexibility – so is there a third way? Well Stone Deaf says that you can just as easily smash those two ideas together, and the result is the SD30 Combo.

Stone Deaf is a small operation with workshops in Oldham and Huddersfield, and we were seriously impressed by their latest stompbox, the Tremotron – a dual tremolo with a fully analogue signal path and ultra-twiddle-friendly digital control. The SD30 works on the same principles: it’s a proper all-valve amp, powered by four EL84s and with a real spring reverb tank at the bottom; but instead of being controlled by a line of potentiometers and maybe a switch or two, its analogue tones are manipulated digitally – either by the knobs and switches on the top panel, or remotely via MIDI.

The key word here – one that you’ll never hear mentioned in relation to a normal tube amp – is ‘presets’. The SD30 can store up to 128 of them; and while you shouldn’t expect the kind of circuit-swapping versatility of a modelling amp, it is closer to that degree of control than you might think.

As well as the usual gain, EQ and reverb settings, presets can include some of the geek-level details that modellers often try to emulate: valve or solid-state rectification, fixed or cathode bias, and Class AB (30 Watts) or Class A (8 Watts). And let’s just reiterate – this isn’t emulation. It’s controlling the flow of electrons through actual, glowing valves.

There’s also an effects loop that can be engaged or bypassed as part of each preset, and you don’t need MIDI to explore all this capability: you can toggle through presets, and save new ones, by pushing in the knobs on the top panel and watching the lights change colour accordingly (the gain control works as a clean/dirty channel selector in the same way).

Adjustments can easily be stored to new presets, but you will need some sort of MIDI device with a five-pin output to change anything remotely – ideally a multi-switch foot controller, though even a cheap keyboard will be able to help out if you know how to programme its data functions.

Hold on, though – we’re getting hypnotised by all this high-tech sorcery and forgetting the most important part: the amplifier itself. It’s a serious lump of backline, and still would be even if they’d forgotten to put all the digital stuff in.

So, first and foremost it’s a 30-watt 1×12 combo with three 12AX7s, four EL84s and a GZ34 rectifier. Components have been sourced from the UK wherever possible, and a couple of the key ones haven’t had far to travel at all: the speaker is a custom-voiced Fane, made just down the M62 in Castleford, and the transformers are supplied by Huddersfield’s Pennine Radio. 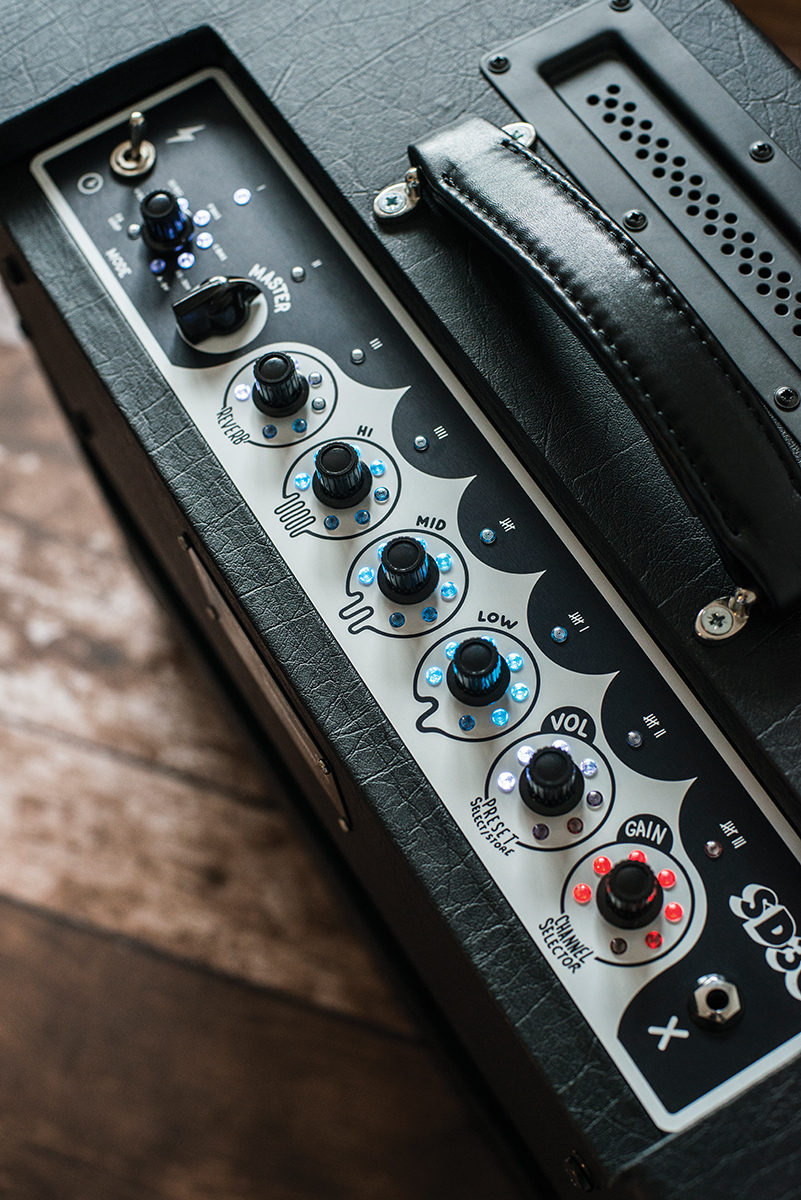 Poplar has been used in the cabinetry to keep the weight reasonable; and though there’s not much to report from inside except that almost everything is attached to one huge PCB, it is an exceptionally tidy build.

What else is there to play around with? You’ve got three EQ controls, which have been designed not to be interactive at all, giving fully independent control over the different frequency ranges; and there’s a balanced DI output, which is raw and unequalised for re-amping.

In Use
How do you navigate 128 presets on a gadget without a screen? Following colour-coded lights isn’t quite as simple as scrolling through a list of named sounds, so we might just leave that side of things until we’ve got our sonic bearings. Finding a basic clean tone is easy enough, and the usual tweaks are really no different to how they’d be on a traditional amp.

And that basic clean tone is good. Four EL84s, cathode biasing, valve rectification, no negative feedback loop… remind you of anything? It is indeed pretty Voxy – rich, sparkly and spacious, compressing sweetly when pushed – but with a more solid midrange that takes us some way in the direction of Orange.

With channel volume at full, turning the master control past halfway only really adds saturation and compression, but it’s plenty loud below that. You’re not going to struggle for stage volume. 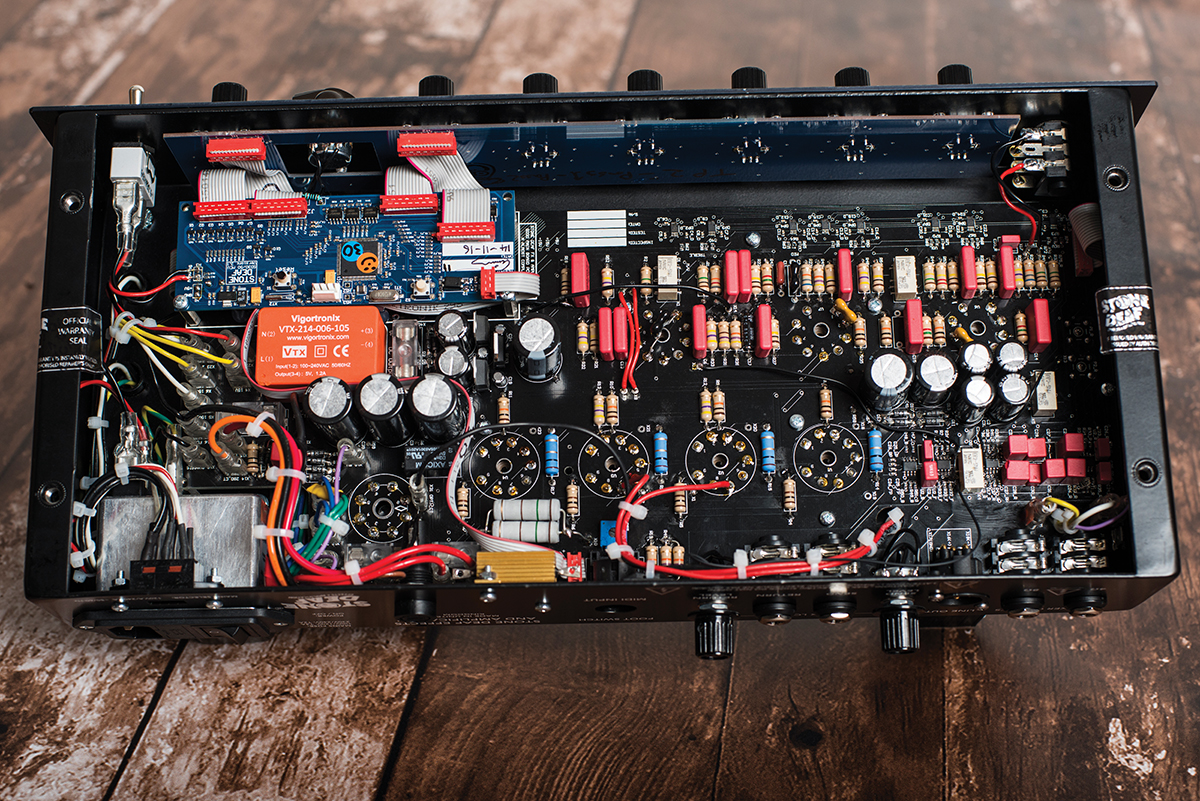 Switching to Class A makes things a lot cleaner as well as quieter, while selecting fixed bias has a distinct stiffening effect – say goodbye to AC30-like sponginess and low-end bloom. As for the rectifier switch, it’s the least dramatic of these three circuit mods, and we wonder if switchable negative feedback might have been a more useful option.

The solid-state rectifier does open up a teeny bit more headroom with high-gain sounds – and my, what fine high-gain sounds they are. This is big, tight, classic EL84 overdrive, and we could happily thrash away at it all afternoon. The separate volume dials allow plenty of control over the gain structure, and maxing out the high and low EQ with mids fully down, high-output humbuckers can deliver some massive metal tones.

The reverb is lovely, though on our review amp a hint of it would sometimes leak out when bypassed.

So what’s it like to skip your way through all these sounds via MIDI? Much depends on the hardware you’re using, but having the ability to save and recall so many preset tones is a rare treat – especially with a real valve amplifier of so many voices.

A lot of players will undoubtedly prefer the more intuitive feel of a less ambitious amp with two or three channels and maybe reverb; but if you need lots of different tones, you’re happy working with MIDI, and you like to see your equipment light up like a fairground, this could be your dream Brit combo. 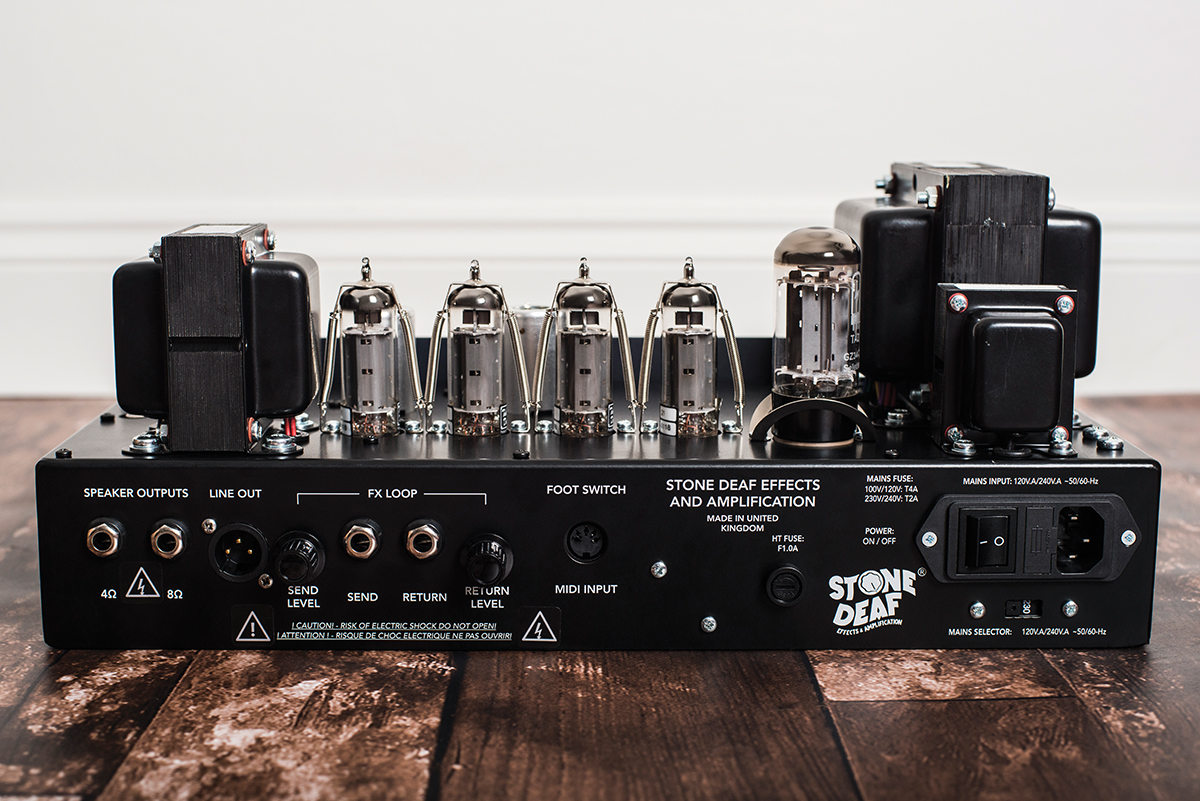 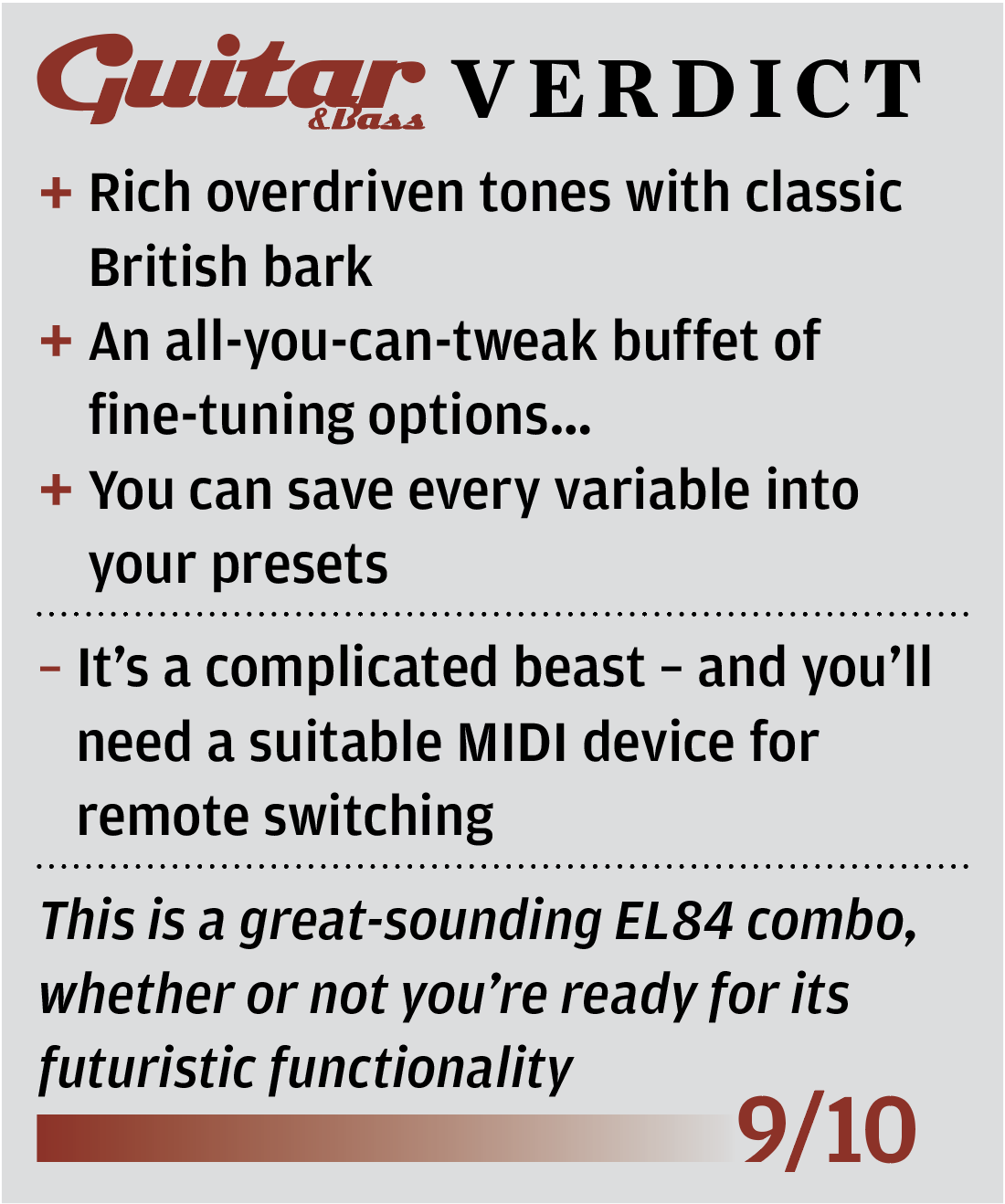