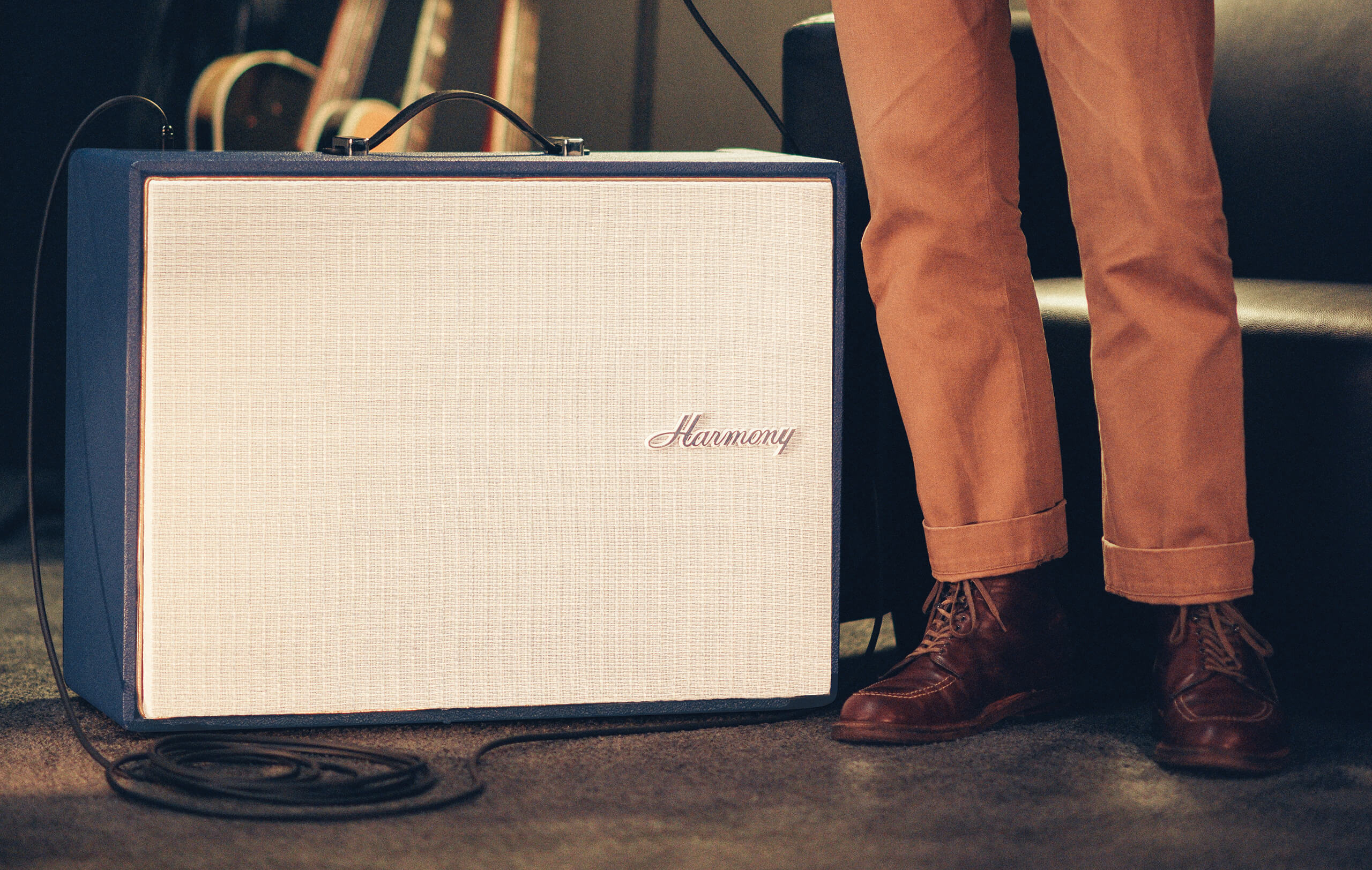 Another brand from the rock ’n’ roll era has been revived, and new Harmony guitars are followed by three handsome and supremely affordable valve combos offering 5, 20 or 50 watts of retro-inspired crunch.

A few issues aside, these are gorgeous-looking amps with bags of character and impressive versatility.

We’re well past the honeymoon period with the new generation of Harmony guitars, so here’s a balanced and dispassionate evaluation: they’re awesome. Amplifiers, however, are a very different proposition.

Back in the catalogue days, American brands such as Harmony, Supro and Danelectro would often sell budget amps alongside their budget guitars… and the 21st century garage-rock revival has sparked fresh interest in these pawnshop raspers and rattlers. But that’s not quite what’s going on with the Series 6 combos.

Like Harmony’s modern six-strings, these amps may take some design cues from the 50s and 60s but they’re altogether more upmarket in execution. That much is clear from the finishes, combining dark blue vinyl with white grille cloth and discreet gold piping. It’s a very, very classy look. 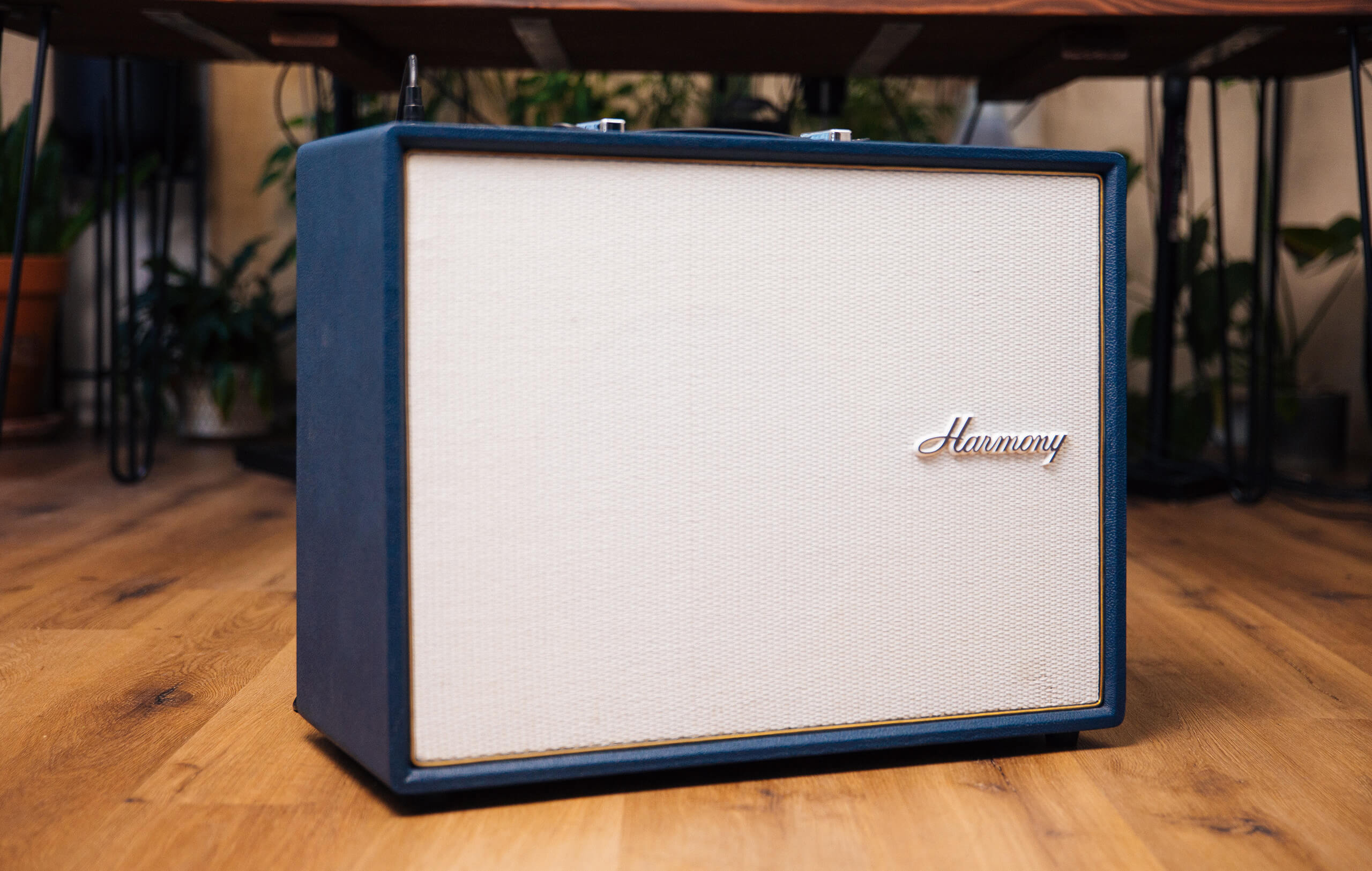 We’re not talking ‘boutique’ here – the amps are made in China and are PCB-based – but they’re solidly built and you’re getting a lot of features for your money: all three combos include real spring reverb and effects loops, while the 20 and 50-watt models also have onboard tremolo. And each amp comes with a pair of cute little dual footswitches for engaging the reverb, the tremolo (where applicable), the loop and a fixed gain boost.

We like these silver-topped white knobs almost as much as we do the cupcakes on Harmony’s guitars, and you’ll notice that the control panels are pretty much full cabinet width. This is necessary because they all include master volume, presence and gain plus a three-band tonestack. 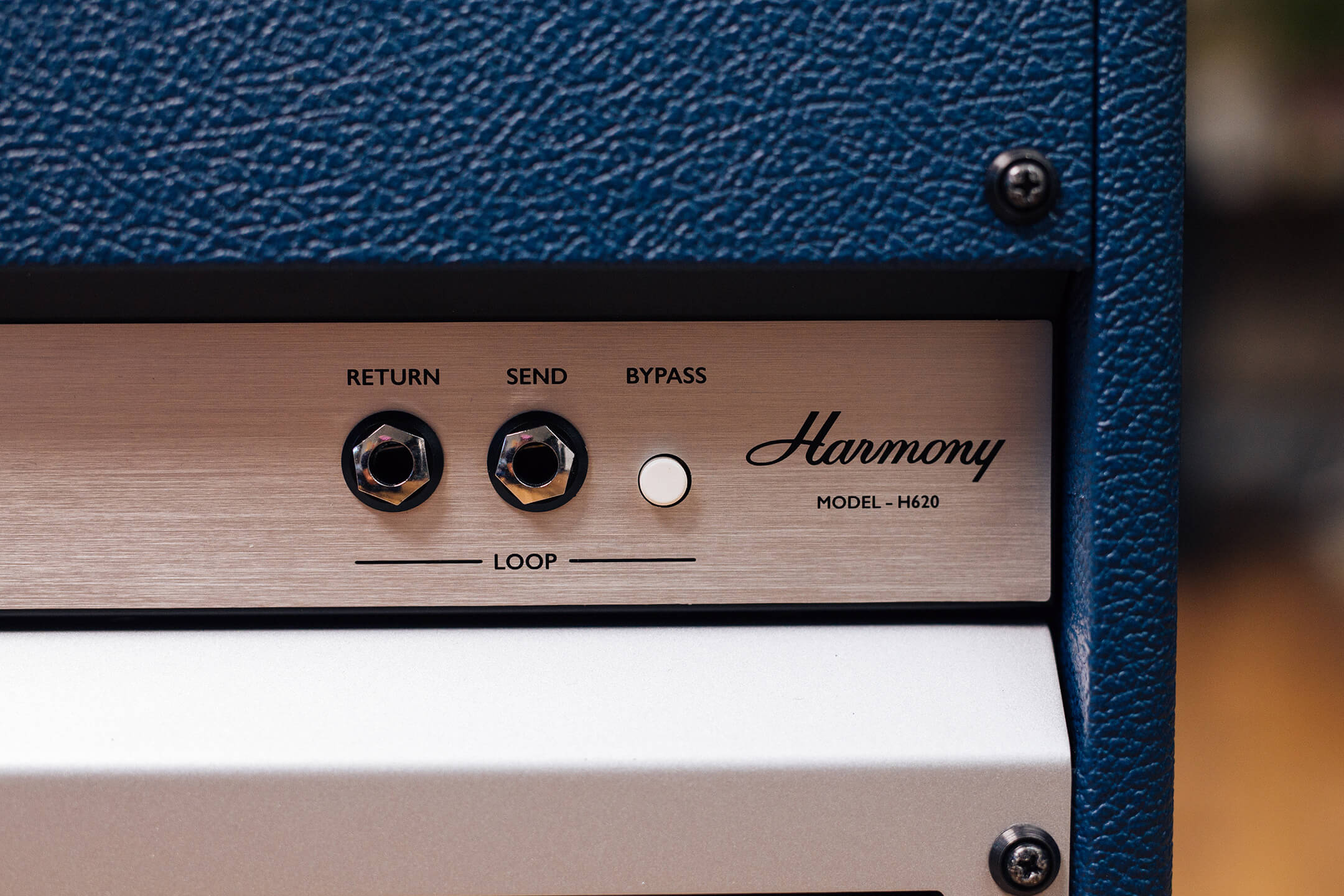 Round the back, meanwhile, you’ll find a four-way rotary attenuator switch, letting you drop the output down to one watt, 0.1 watts or zero for silent recording via the line output. Certainly in the case of the little H605, it’s hard to think of another five-watt valve combo that packs in so much functionality.

The output stages of all three amps use 6L6s: a single in the H605, pairs in the H620 and H650. Removing the back board of each amp reveals that the valves are mounted to the front of the chassis, facing out into the void behind the speaker baffle. This does make them a tad inaccessible, but don’t start ripping out the whole chassis in a fit of rage just yet: they can be reached from below if you unscrew the vented metal panel at the bottom.

We’re getting an early sight of these amplifiers because Harmony’s parent company is BandLab Technologies, which also happens to own Guitar.com. Note, however, that we haven’t yet been told of a UK release date, so for now we’re testing US-voltage amps with the aid of a step-down transformer. 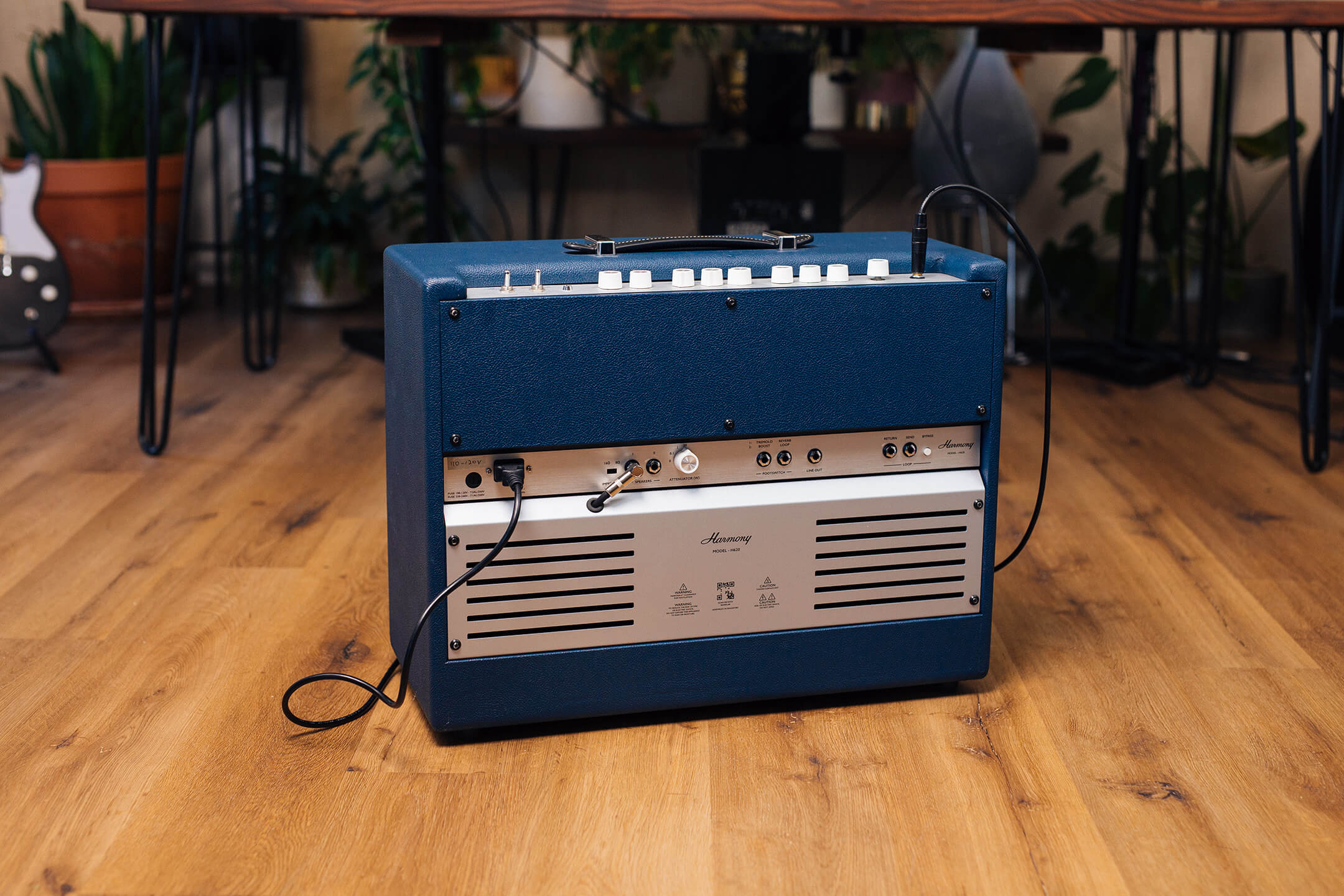 To avoid carrying out this entire testing process through a haze of tinnitus, we’re going to start with the lowest-powered amp and work our way up. And the first thing to say about the H605 is that, for a five-watter, it’s not small.

This is a 1×8 combo packing a diddy Jensen P8R, yet from the front its dimensions are a rough match for a 1×10 Princeton rather than a Champ; and when you add to that a depth of 27cm, you get an amp that’s a full 50 per cent heavier than the Fender ’68 Custom Vibro Champ Reverb we reviewed in June. The Harmony designers could easily have fitted a 10-inch speaker in there, probably even a 12-inch, if they’d really wanted to.

After five minutes of playing, however, we can see why they didn’t bother. This has to be the fullest, warmest bottom end we’ve ever heard from a single 8-inch speaker. 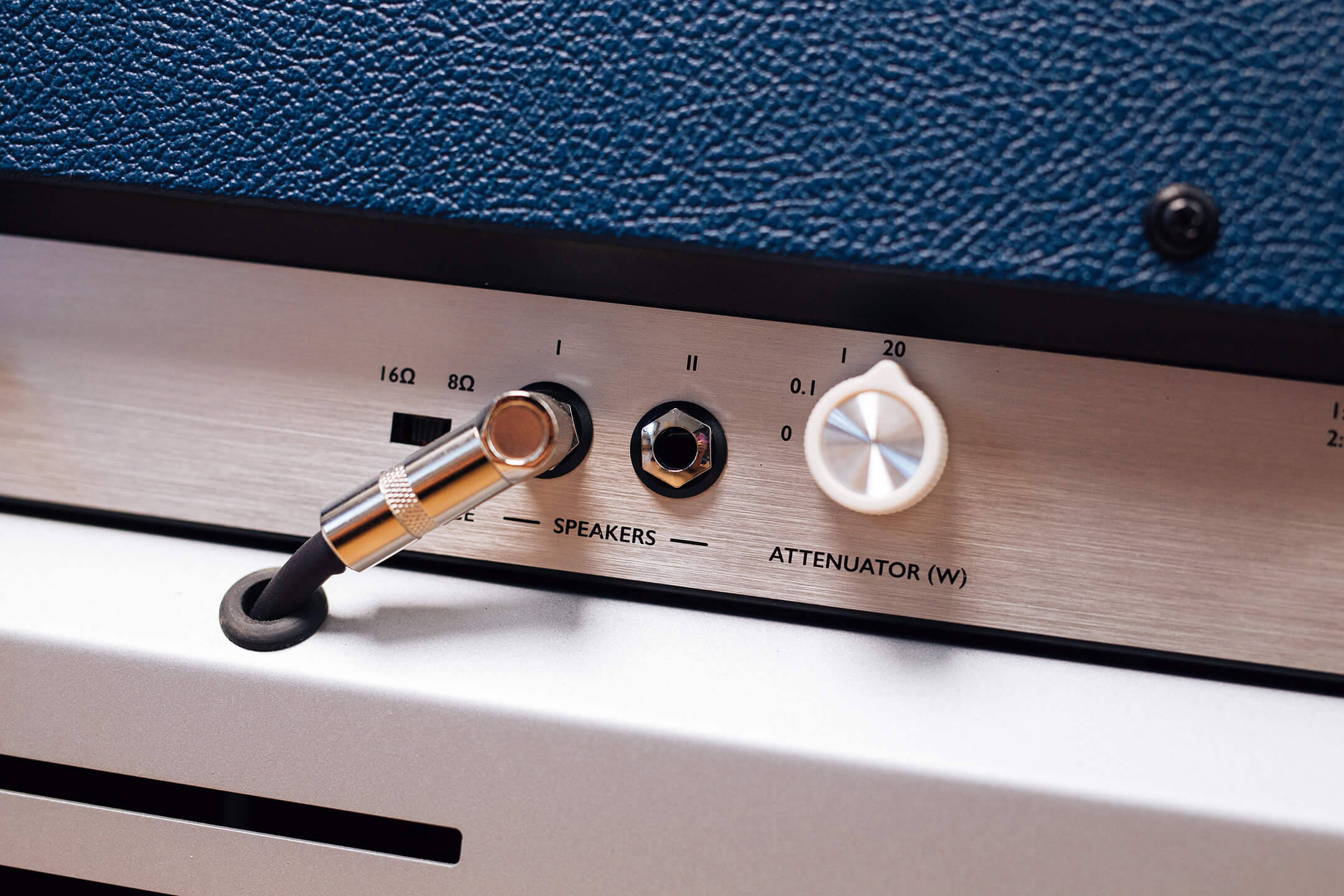 Nobody buys a five-watt amp for shimmery clean tones, so we’re hardly surprised by the lack of headroom on offer here. But that doesn’t mean we’re hurtling straight into frazzled fuzz: with preamp gain and master volume both set conservatively low, we get a well-balanced tone with just a modicum of scuzz around the edges.

The playing feel has that relaxed intimacy that so often makes single-ended combos feel like an extension of the guitar, and this is coupled with an almost inaudible noisefloor. Things can get scratchy on the transient attack with brighter-toned guitars, and we find ourselves leaning towards humbuckers rather than single-coils to avoid that, but it’s less of an issue when we turn up the gain – or even better, pull up the knob to engage the boost.

There’s a lot of hard-rocking entertainment to be had in this amp’s angry zone, with special mentions going to the presence and mid controls for their ability to reshape its voice just about however you want it, and to suit whatever guitar you’re playing through it. Note also that the boost makes a big difference even when the gain is already set high, allowing you to flip from chunky but snappy to ever so slightly out of control. We’re not quite so enamoured with the reverb, which is so deep and resonant that it can get overbearing. 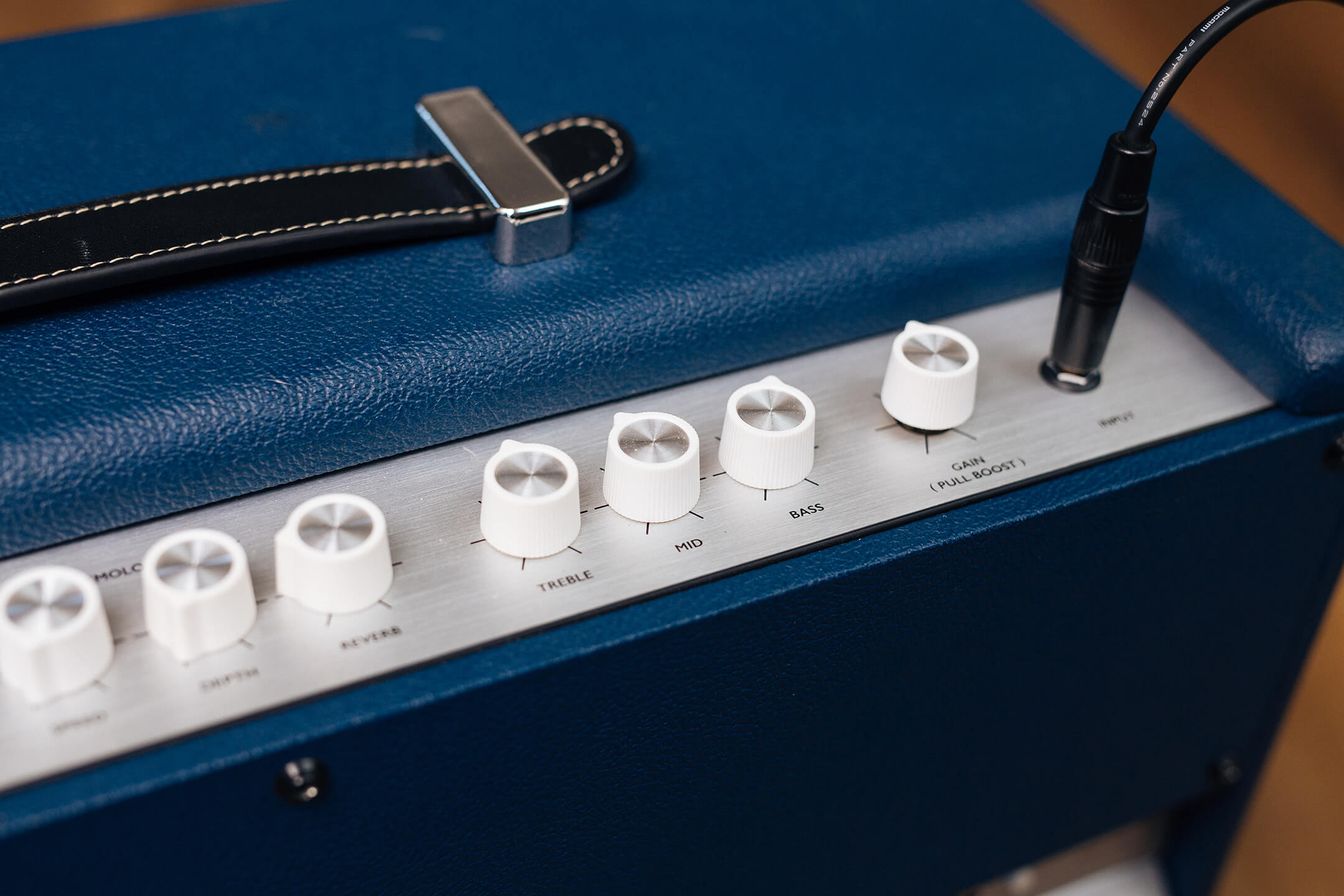 Recording clean tones from the H605 using the line output is a bit of a non-starter, but the overdriven stuff scrubs up nicely once you run it through a decent impulse response. We should also mention the effects loop, which works fine and sounds impeccable.

Now we move on up to the H620, with double the output valves, four times the wattage… and eight times the fun? Not exactly.

That extra power does lend our 20-watter a lot more clean headroom but it’s still eager to get down and dirty – which is fine, except that the core tone of this amp is less immediately likeable than that of its little sibling, characterised by a more pronounced midrange that flirts with honkiness. 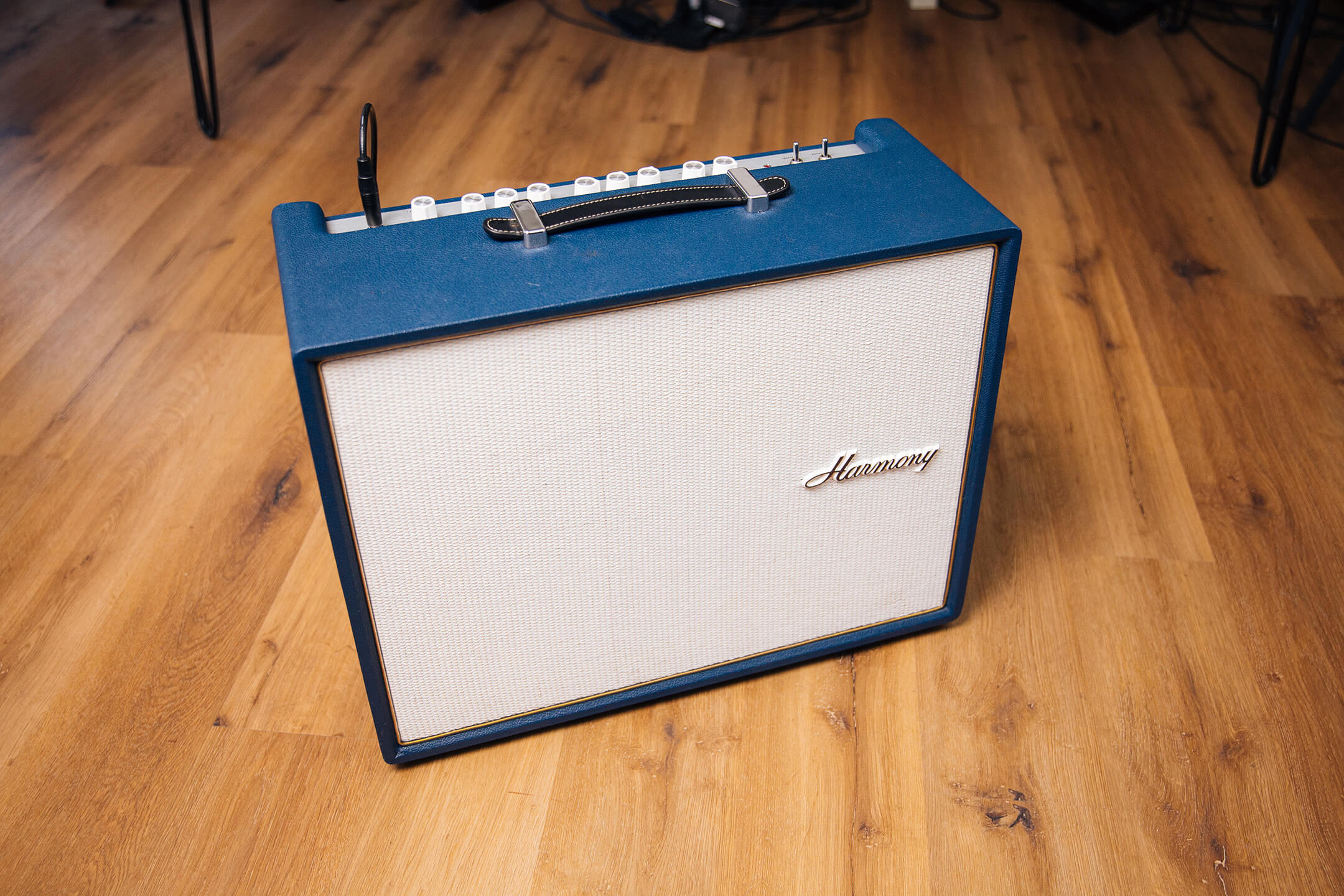 The reason for this, it turns out, is the speaker. Because as soon as we unplug the internal Jensen Falcon 50 and patch out to the Jensen Tornado Stealth 65 in the H650, everything opens up beautifully. This is odd but judging by the sound samples on the Jensen website it’s to be expected: the Falcon is distinctly darker and more middly than the Stealth. Is it too late for a rethink on this, Harmony?

Otherwise, the H620 does more or less pick up where the H605 leaves off in terms of overall performance, bringing on the crunch in the same way – only a lot louder, of course – and requiring the same kind of caution when playing clean-ish with single-coil pickups.

The reverb is again rich and bloomy but feels more manageable this time, and now we also get some powerful tremolo to mess around with. This has a generous range in both speed and depth, and is capable of producing some extreme effects, though its most obviously appealing use is for adding a moody throb to slow and spacious rhythm playing. Plug both of the dual footswitches into this thing and you might even be able to give your pedalboard a night off. 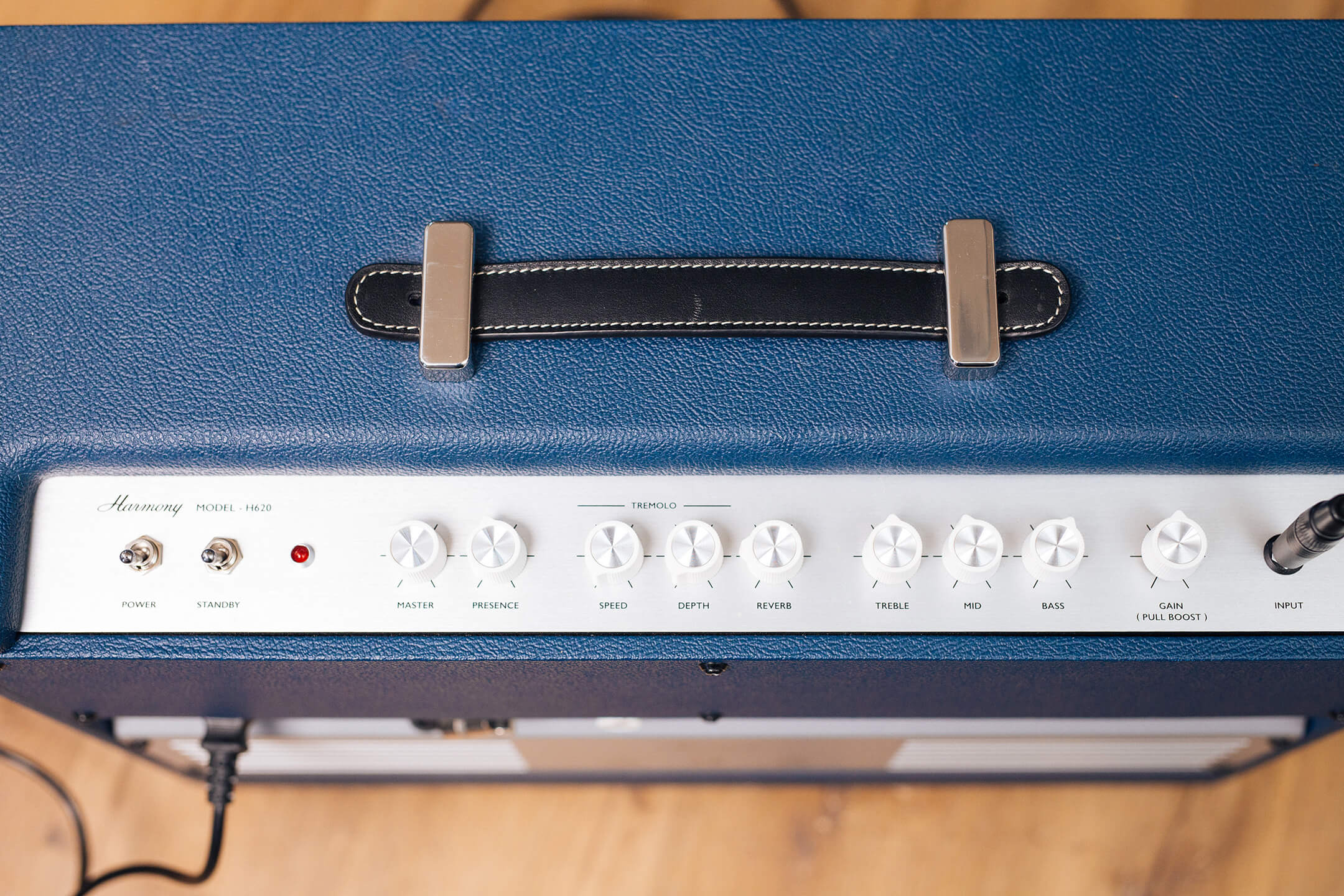 What does that leave us to say about the H650, which basically takes all the features of the other two amps and turns them up a notch or three? Well, in practice, the 50-watter turns out to be arguably the most all-round useful and desirable member of the Series 6 trio.

It’s only slightly bigger and heavier than the H620, which is a good start – and as we’ve already seen, there’s nothing controversial about the speaker fitted here. The result is an amp that simply sounds nice… and continues to sound nice even when you’re not playing at anything like 50-watt levels.

We’re still not talking about epic Twin Reverb cleans – and yes, that single-coil scratchiness is still there at semi-clean settings – but the extra headroom in this model gives real authority to airy strumming and booming low notes. Even so, it’s only at properly overdriven settings that the H650 really gets to enjoy itself. Again the controls bring supreme tonal flexibility, and again the onboard boost sounds fantastic, but the extra power available just makes this amp a more stimulating companion when it comes to punky chords and high-energy riffing. 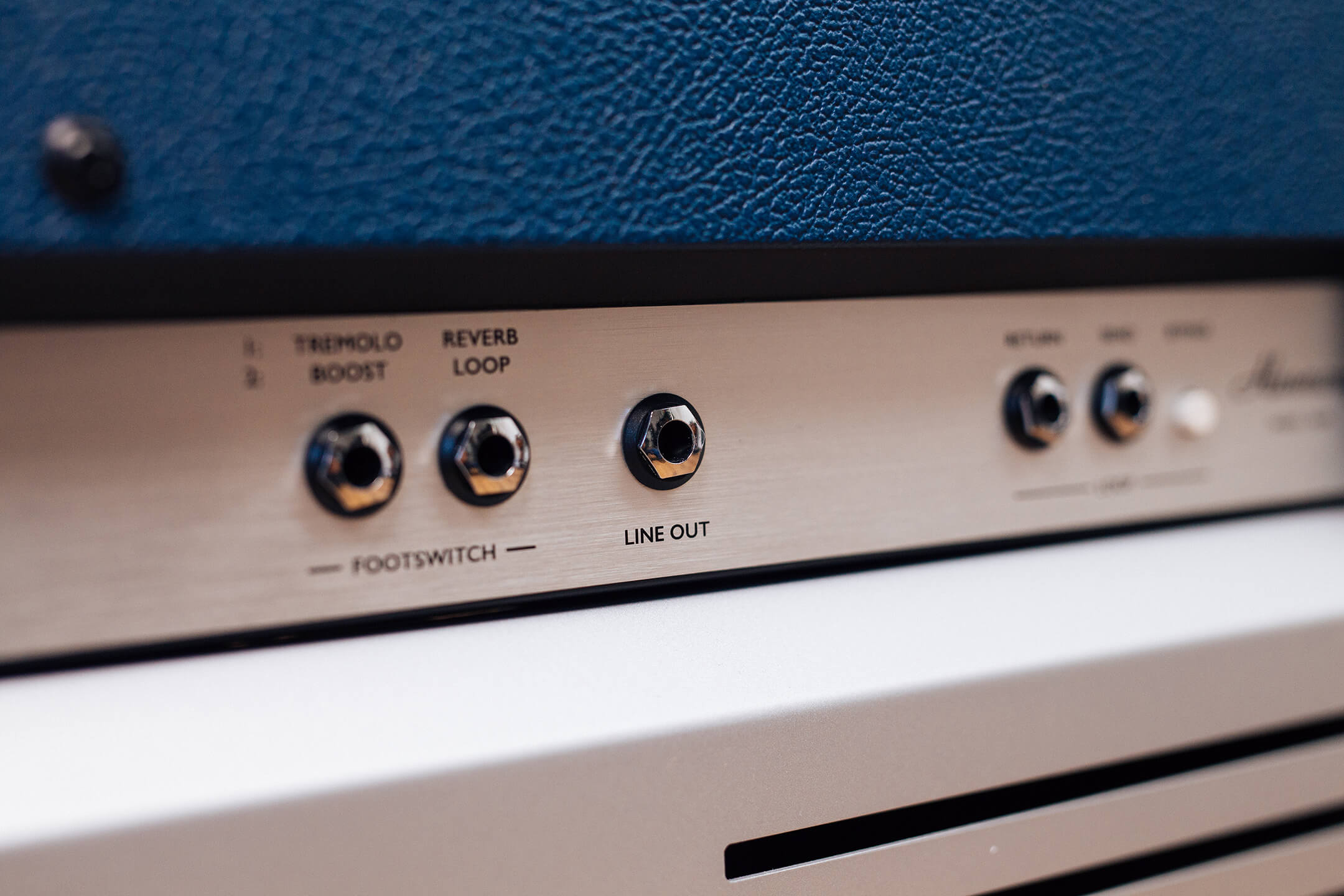 As with the other two combos, there’s a fair chunk of extra drive unlocked by pushing the master volume past halfway, but a key point when dealing with this kind of wattage is that it still sounds perfectly agreeable when set much lower than that.

The relative weediness of the reverb suggests a minor fault with our review sample (it uses the same Ruby Tubes tank as the H620), which is a pity, and so is the fact that the attenuation doesn’t offer any options louder than one watt: it sounds fine, but inevitably a wee bit flat. We’d love to hear this thing growling away at 10 or 15 watts.

We’re not dealing with sonic perfection here… but you could argue that, in the spirit of garage rock, we ought to embrace the flaws – well, at least some of the flaws – in all three models. Bottom line? If you’re after nothing more than the throaty all-American roar of pre-Hendrix rock, you’ll find a generous triple helping of it in these gorgeously styled amps. 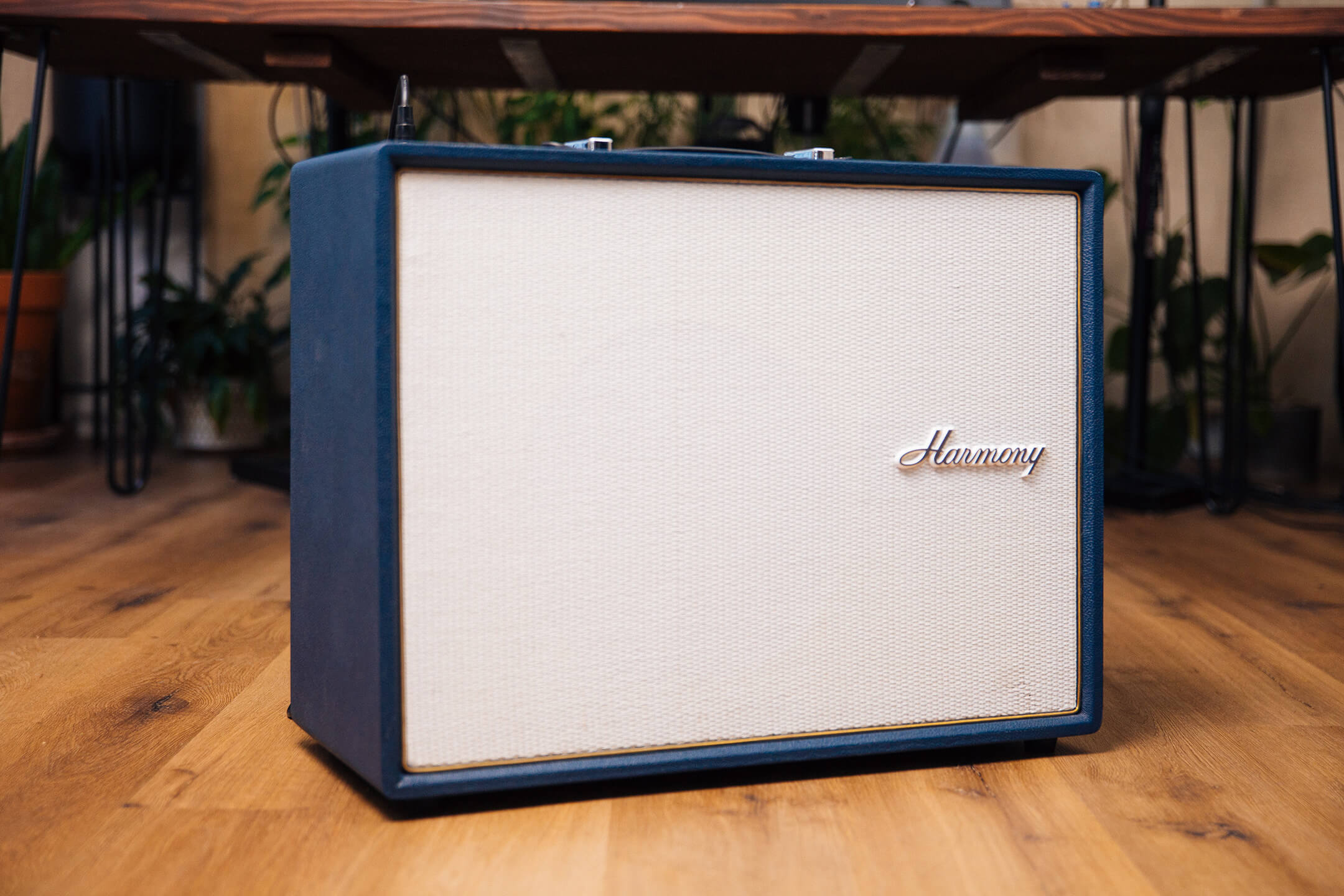