If the big-bottle and big-iron sound is your thing, but a 100-watt power stage is too much, check out this medium-sized solution from California. 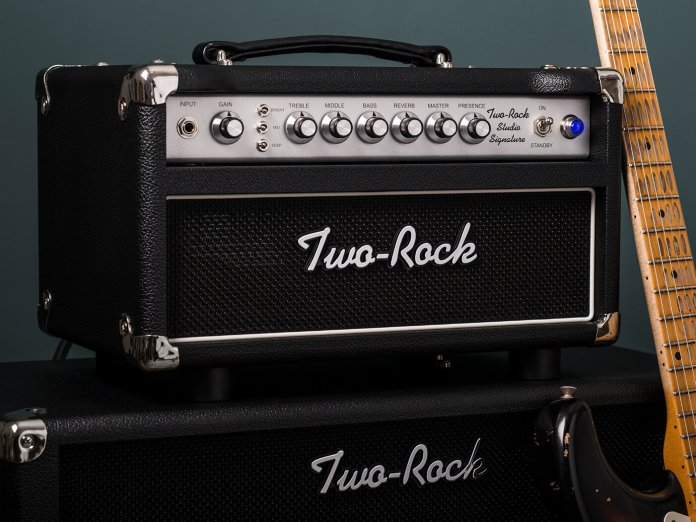 With an emphasis on high-wattage Dumble-inspired designs, there’s a slight sense that Two-Rock has been kicking against the low-volume zeitgeist. That said, when we reviewed the Classic Reverb Signature back in 2017, it turned out to be the most player-friendly 100-watt amp we’ve ever tried.

Even so, how many of us really need a 100-watt amplifier these days? Recognising this, Two-Rock introduced the Studio Pro 35 and that has now been facelifted and updated to create the Studio Signature. Two-Rock describe it as a lower power version of the Classic Reverb Signature, but it’s downsized, more portable and produces 35 watts from a pair of 6L6 output valves.

The controls have been simplified, with custom-taper potentiometers and no push/pull switches. Instead, three frequency-boost switches are located on the front panel, right next to the three-band EQ. There’s a presence control, too, along with gain and master and both the head and combo version (£2,899) have spring reverb.

On the rear panel, there’s a reverb send control that sets the signal received by the spring tank. It’s there to provide different decay times and tonal characteristics. Next to that is a three-way gain structure switch (Blackface, Traditional Two-Rock, Schofield Signature), effects-loop connections and three speaker outputs for four, eight and 16 ohms. For testing, the Studio Signature is paired up with a Two-Rock Black Bronco open-backed cabinet (£599) with a WGS 12-65 speaker – Warehouse’s version of a Celestion G12-65.

Two-Rock describes the Studio Signature as a versatile clean amplifier. The operative word here is ‘clean’ and as such, this amp may not conform to everybody’s idea of versatility. Even so, Two-Rock’s claim has some justification, because it offers a lot of scope for fine-tuning frequency response and dynamic feel within the context of a very high-end, medium-power pedal platform.

There’s more to it, of course, because the Studio Signature is also capable of producing some classy overdriven tones, even if they might come at the expense of your hearing! In large part this is because the gain and master controls don’t really operate in the way you might expect. The gain knob isn’t a wide-ranging control that takes the Studio Signature from clean to crunchy and the master isn’t intended merely to control the beast. If you want this amp to overdrive, both have to be set fairly high and that means you’re going to get blasted.

Let’s begin by establishing how much clean headroom is available. The gain structure switch is set in the up position to select Two-Rock’s ‘traditional’ front end, the master is maxed out and we slowly edge up the gain control. Using the middle pickup of a 60s Strat, the gain can’t be pushed much beyond nine o’clock before we hear overdrive creeping in. That may not seem like a lot of leeway, but by that point, the Studio Signature is really shifting some air.

Next, we turn the master control down a touch and compensate for the volume drop by increasing the gain. Rather than getting an immediate increase in overdrive, we find that the gain control can now be advanced beyond 10 o’clock before overdrive onset and an accompanying midrange push makes the tone fatter and slightly smoother.

Going back to our original cusp-of-overdrive sound, we flick through the gain structure settings to get a sense of what they do. It really is mostly about gain and touch sensitivity rather than frequency response, with the Matt Schofield signature setting immediately putting the Studio Signature into overdrive and the Blackface setting sounding cleanest of all. We can imagine the latter being a good bet if you’re looking for clean tones with hotter pickups, but we find the Traditional Two-Rock front end best suited to Fender-style single coils. It’s that bit louder, clearer and more dynamically responsive.

The way the tone controls operate and interact with the frequency boost switches is key to what the Studio Signature is all about. Although straightforward to operate and understand, there is clearly some sophistication here. Because the amp’s core tone is so good, the tone controls aren’t merely there to help you dial in a useable sound. Instead, they provide seemingly endless variations on crystalline clarity and refined excellence, because wherever you set them, you’ll find wonderful tones.

Similarly, the three frequency boost switches impress because there’s no attempt to justify their inclusion by making them too powerful. Two-Rock has targeted three genuinely useful frequency centres and provided just a sufficient boost. Used in conjunction with the equalisation controls, the Studio Signature finesses a guitar tone much like a high-end recording channel handling a microphone signal.

Combining Schofield mode with mid-boost is the easiest way to coax the Studio Signature into overdrive. It doesn’t do metal, but if clear and smooth overdrive with impressive sustain and harmonic bloom sounds appealing, that’s what you get. Unfortunately, you only get it with the gain and master controls cranked.

The half-power option was a feature we really appreciated on the Classic Reverb Signature – spending most of our time in 50- rather than 100-watt mode. The Studio Signature only has a push-pull pair of 6L6s, so a similarly configured power switch isn’t an option. If used as a pedal platform, it’s not an issue. However, if you like to get some or all of your overdrive from the amp, you need to consider whether the venues you play will allow you to run the Studio Signature at the required volume levels.

Using an attenuator may be the solution at smaller gigs, and we manage to get some great results using ours. Then again, the Studio Signature sounds just as good with overdrive pedals, which is entirely as expected.

If you like your guitar tones rocky and rough edged, this isn’t the amp for you. But it’s a stellar pedal platform and offers pristine clean and edge-of-breakup tones in the contemporary West Coast style, with the addition of lush and three-dimensional reverb.

Jen Majura “still in shock” over Evanescence firing, thought it was a “bad joke” at first

“I wish I were the type of person who could sell a guitar”: Jamey Arent on the versatility of the 335 and being sentimentally...