Yamaha’s THR range popularised the lifestyle amp format – but do you really need one for your acoustic guitar? 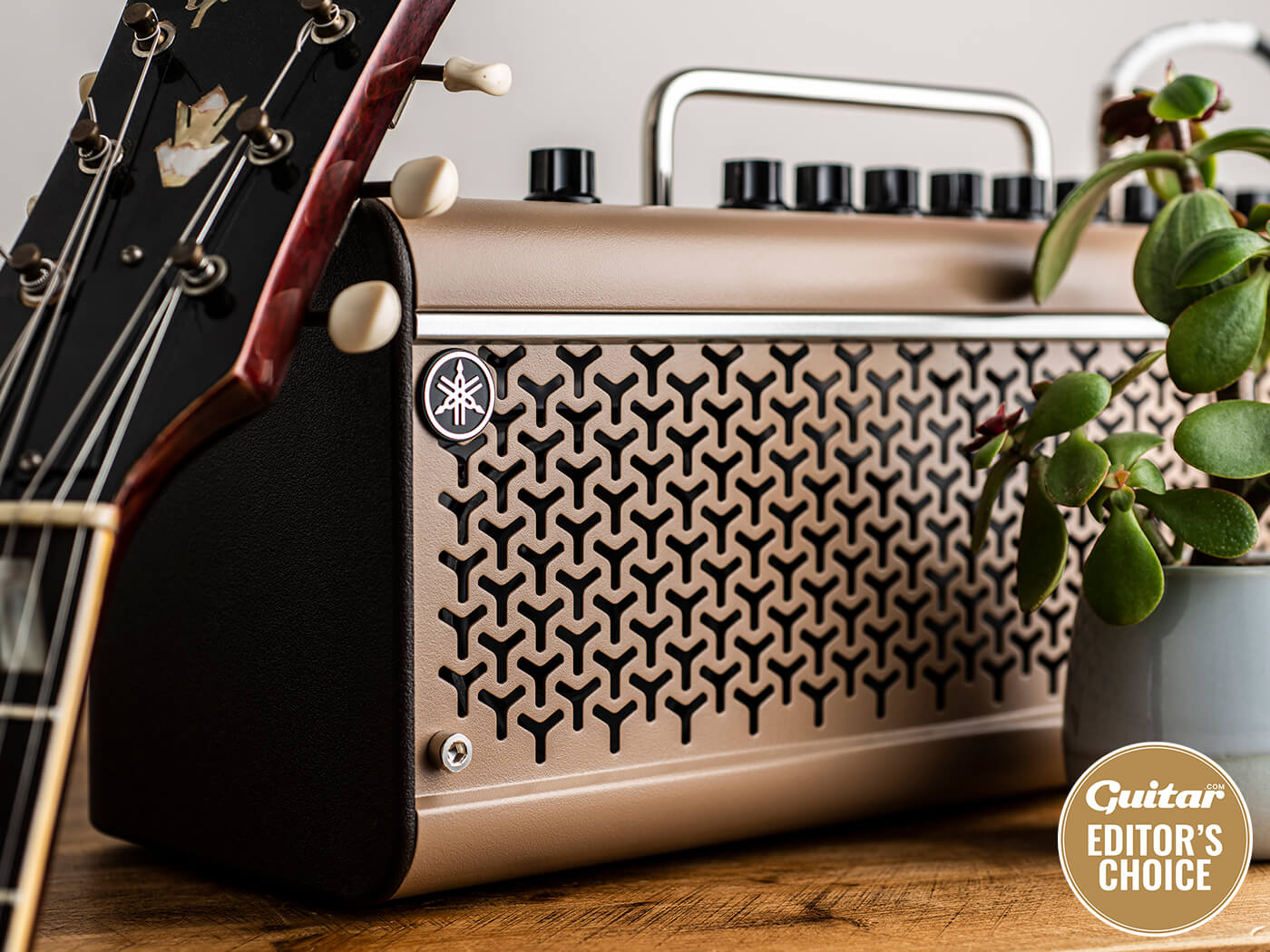 An impressive hybrid of lifestyle product and gig-box for intimate venues.

Blurring the lines between dedicated line-array acoustic amp, mixer, digital audio interface and portable lifestyle sound system, the THR30IIA is a visually striking unit in a browner shade of beige than its siblings in the Yamaha THR-II series. Though it looks great in a living room, the front grille and metal handle mean it’s robust enough for use in the wild, while the control panel bristles with more bells and whistles than most players would associate with acoustic performance.

There’s a separate mic/instrument channel with Yamaha’s combined D-Pre XLR/jack input and its own dedicated gain, reverb and volume controls which could come in handy for vocals or a stereo pickup system but the lion’s share of the amp’s functionality, at least on the surface, belongs to the guitar channel. This features a four-section approach allowing you to get tonally involved on an almost molecular level. 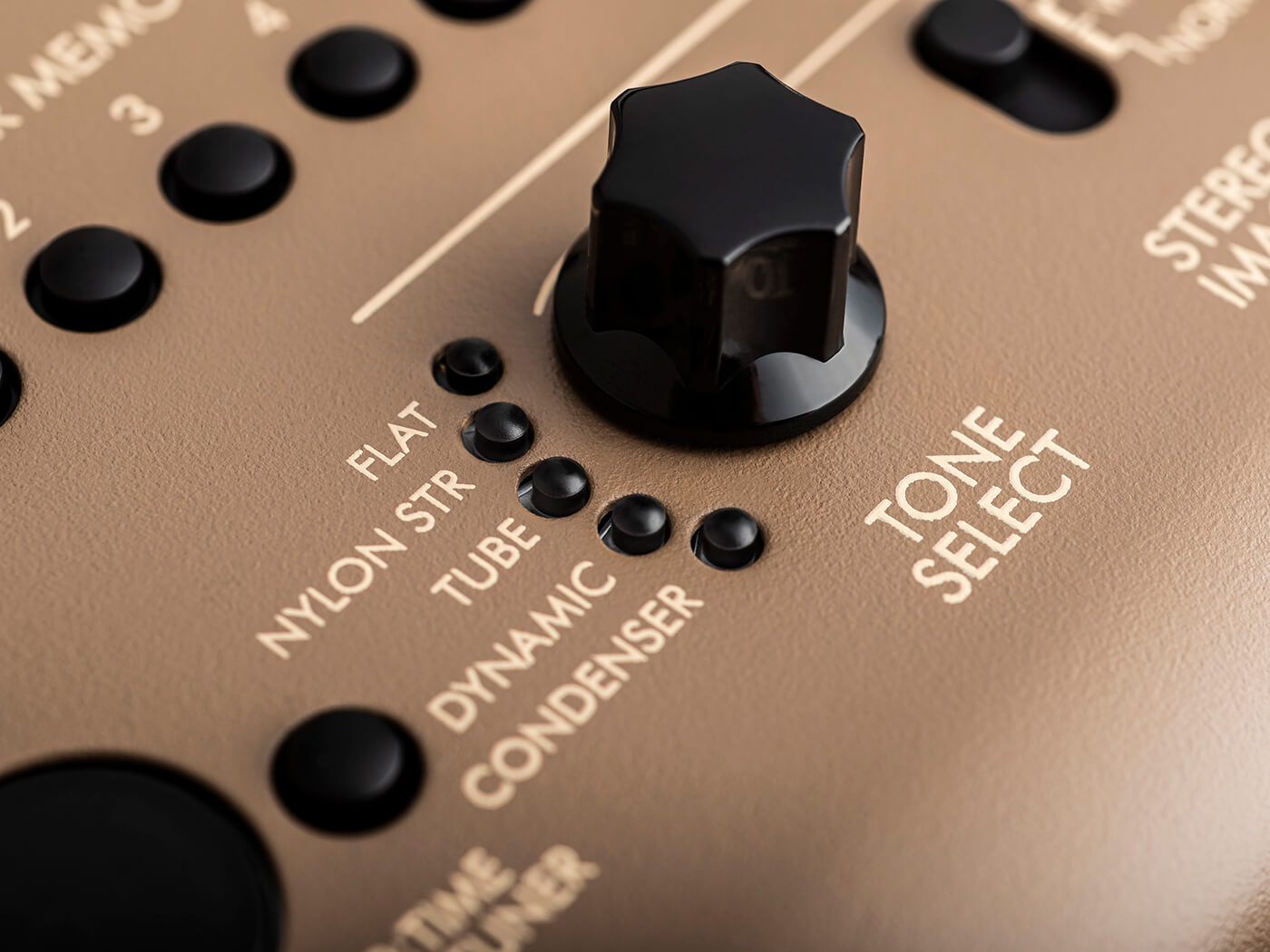 At the heart of the guitar channel is the tone select control – a deeply naughty piece of machinery which allows access to three blendable simulated microphone sounds (more on which later), a dedicated nylon-string voice and a flat setting for use on the off-chance that the sound coming straight from your guitar is just too delicious to tamper with.

Next up is a small three-way stereo imager switch which, as the name might suggest, takes advantage of the THR’s twin speaker/twin horn design to offer varying degrees of spread from normal to wide, to wider. This is coupled with a three-band EQ section, an effect control offering varying degrees of chorus and/or delay, and a reverb control boasting both long and short-tail varieties. In addition, the master volume should have you covered in a wide variety of acoustic settings but wait – there is more. 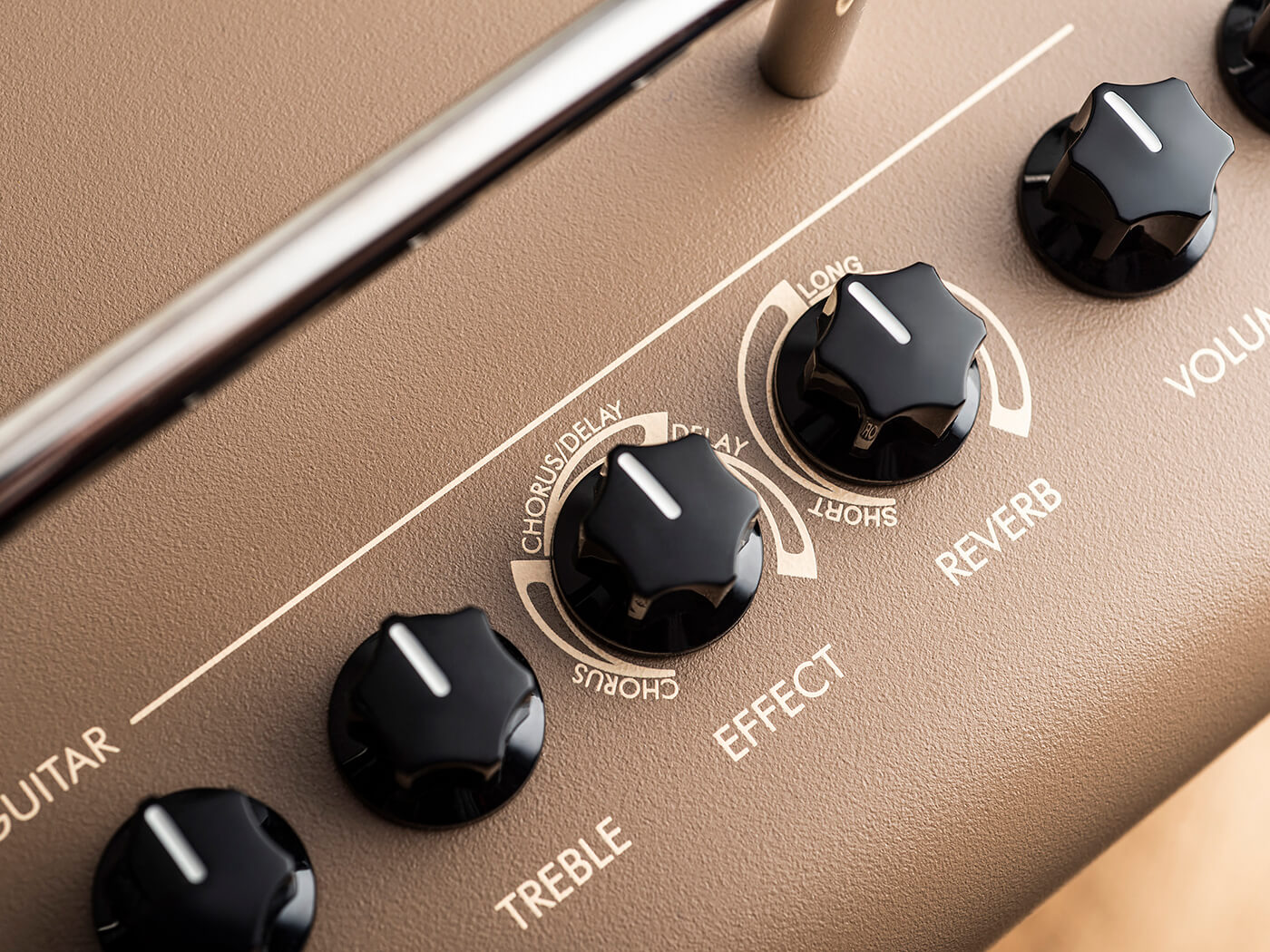 Do you want immediate access to up to five assignable presets? Want to play along to backing tracks via Bluetooth or an auxiliary input? Fancy using a Line 6 Relay G10T wireless transmitter so you don’t have cables trailing across the room? Want to plug straight into your Mac or PC via USB and record using the bundled Cubase DAW? Go ahead – it’s all there.

Those looking to further immerse themselves will find the accompanying Yamaha THR Remote app almost irresistible as it offers an even deeper level of control via smartphone or tablet. We download the iOS version and get ready. 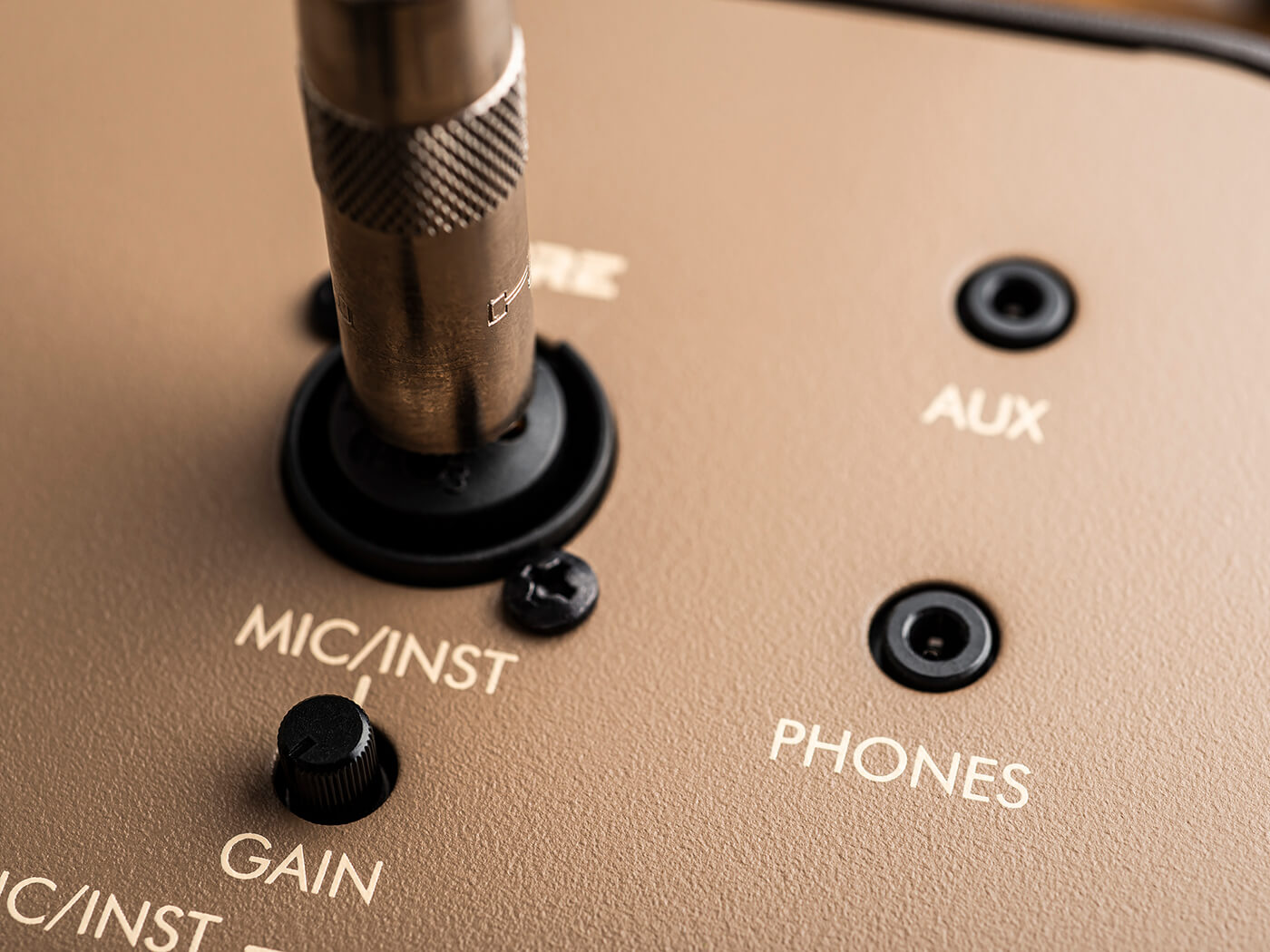 Plugging in a Kostal Modified Dreadnought with its K&K passive pickup, we go straight in with the flat setting illuminated on the tone select control (in this case the tone blend control adds gain rather than any wet/dry manoeuvres). With all the EQ knobs at noon and just a kiss of reverb, we are rewarded with a warm, natural sound that is very good indeed. Back in the day this was all anyone would reasonably expect of an acoustic amp and would be worth the price of entry alone, but these are new and interesting times and as such we delve further.

It is with the modelled microphone voices and blend knob that we find the most fertile ground. The condenser voice is open and airy in a way that suggests we’re hearing a model of a small diaphragm mic rather than a great big U87. The dynamic voice delivers an SM57 vibe with a mid-heavy and immediate sound – just the thing for cutting through a live mix. The tube microphone simulator is maybe the weakest of the three in that it begins to sound distant the more of it you blend in – that said, just a touch can be very effective. 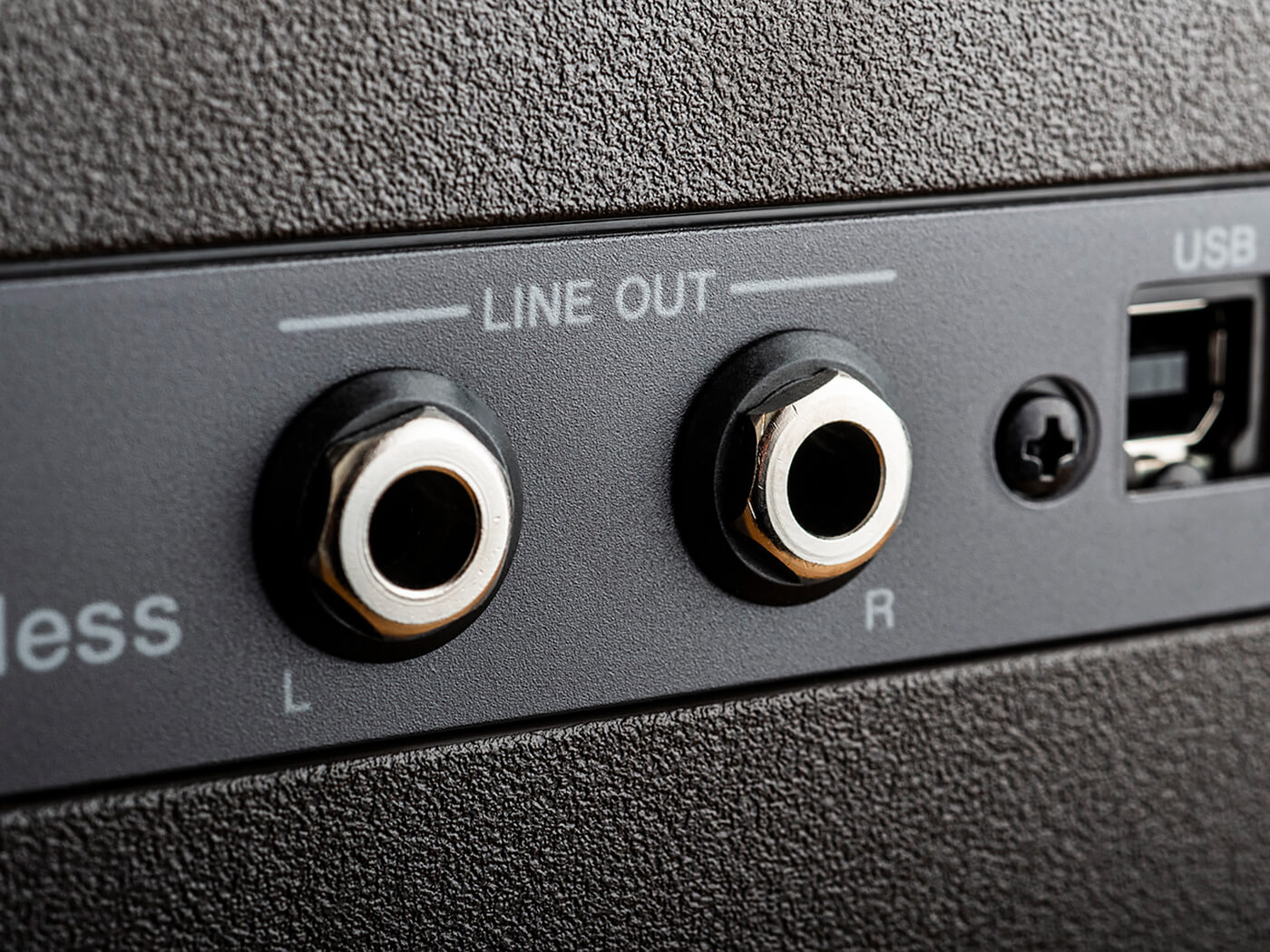 Perhaps the most impressive aspect of this system is that rather than stamping too much of their identity on your sound like an EQ might, the microphone models allow your playing hand position and attack to maintain an active role in proceedings while putting the aural equivalent of an Instagram filter over the sound. It’s a musical approach that encourages creativity.

We also give the nylon string voice a workout with a Yamaha SLG200N Silent Guitar with, it has to be said, sensational results for both classical and bossa nova approaches. 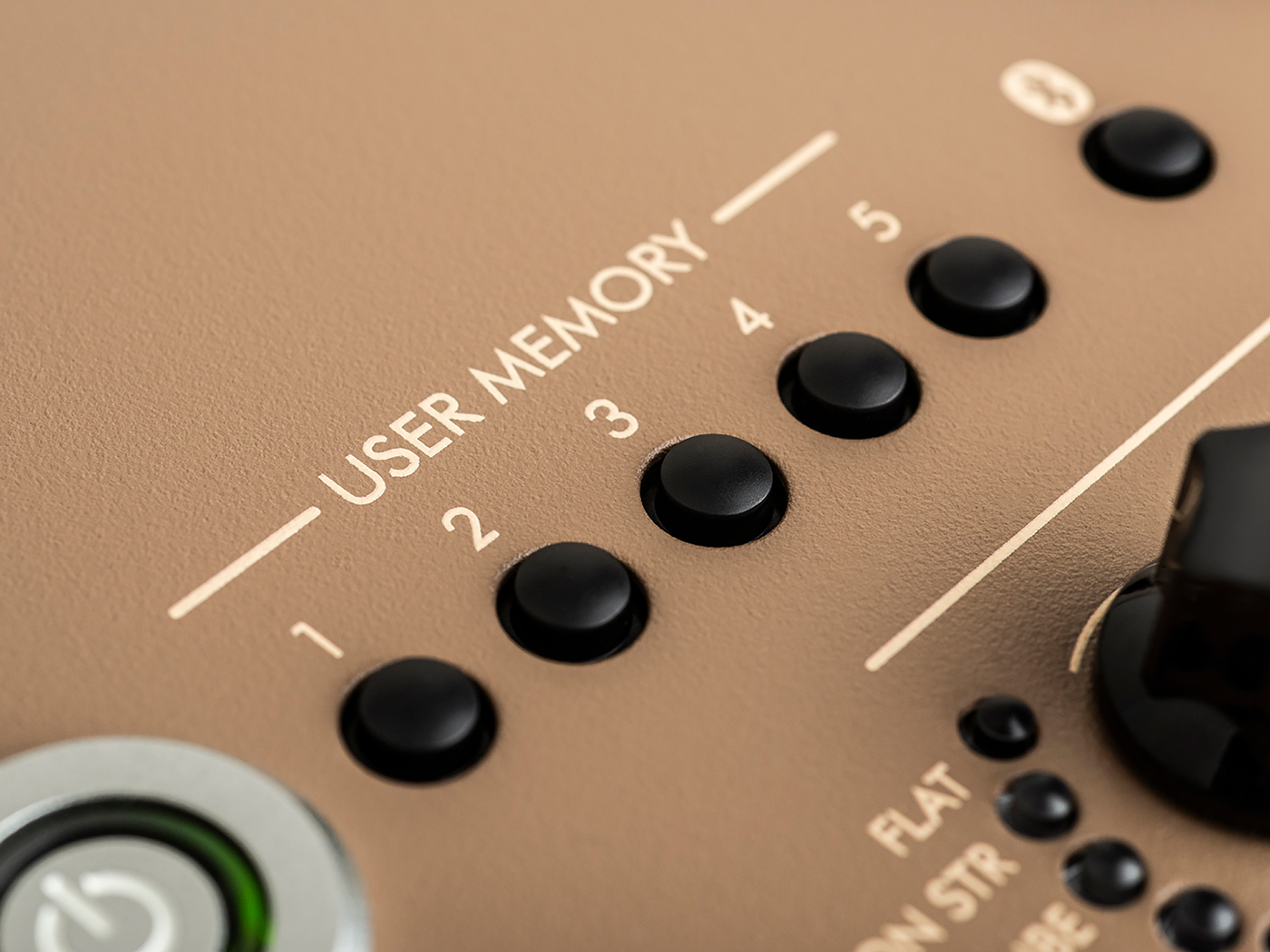 Reassured of the quality of the ‘clean’ sounds, we plunge into the potentially polarising waters of acoustic chorus and delay. This process is made more immediate with the THR app, which not only allows immediate control over the effects selection but also unlocks added perks such as a compressor, reverb EQ and other useful touches. If you’re looking for more than just a natural sound then this could be all you need. You can also mess with its little head – using the nylon-string voice on a steel-string instrument gives us a frighteningly good Dobro sound!

Whether the THR30IIA becomes your acoustic amp of choice may depend on the following. First of all, it’s not very loud. Yes, it’s rated at 30 watts (if you’re relying on the battery power alone then you’re looking half that) but it’s not the pokiest amp of this kind we’ve encountered. If that bothers you then you can use the line outputs on the back panel to send it to an external PA, but that possibly defeats the object. Secondly, the D-Pre does not offer phantom power, so that means your options are mostly limited to dynamic microphones. Finally the sound of the amp, in particular the bass frequencies, is very sensitive to placement; we got wildly differing results depending on its position and the type of surface on which we placed it. 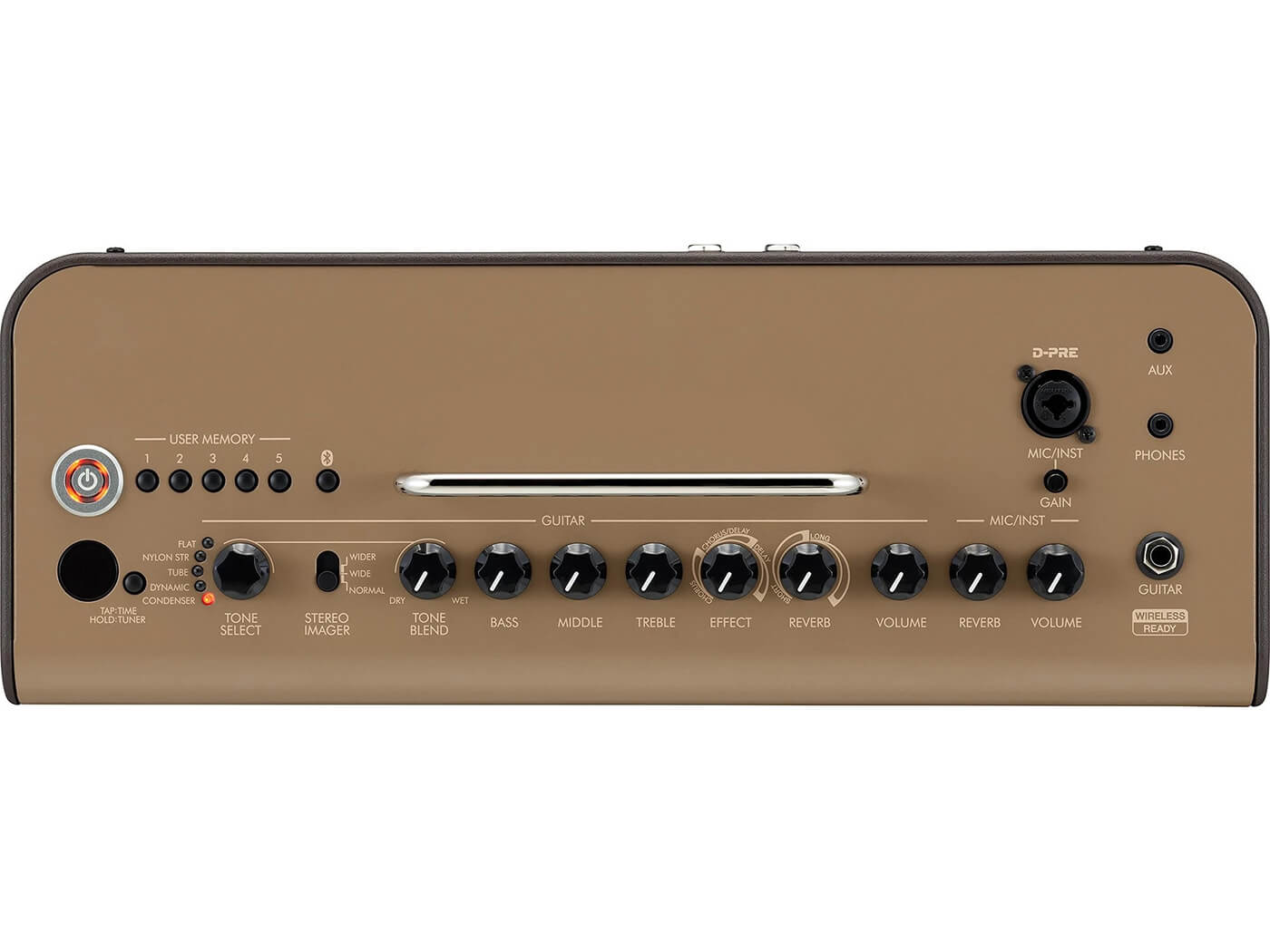 All that said, if you’re an acoustic player looking for a single source of sonic truth which will handle just about anything you throw at it with the minimum of fuss, then Yamaha’s latest THR should definitely be on your shortlist.