Faux distress isn’t for everybody, but in the case of Alister Atkin’s Buddy Holly-inspired dreadnought it’s more than skin deep. 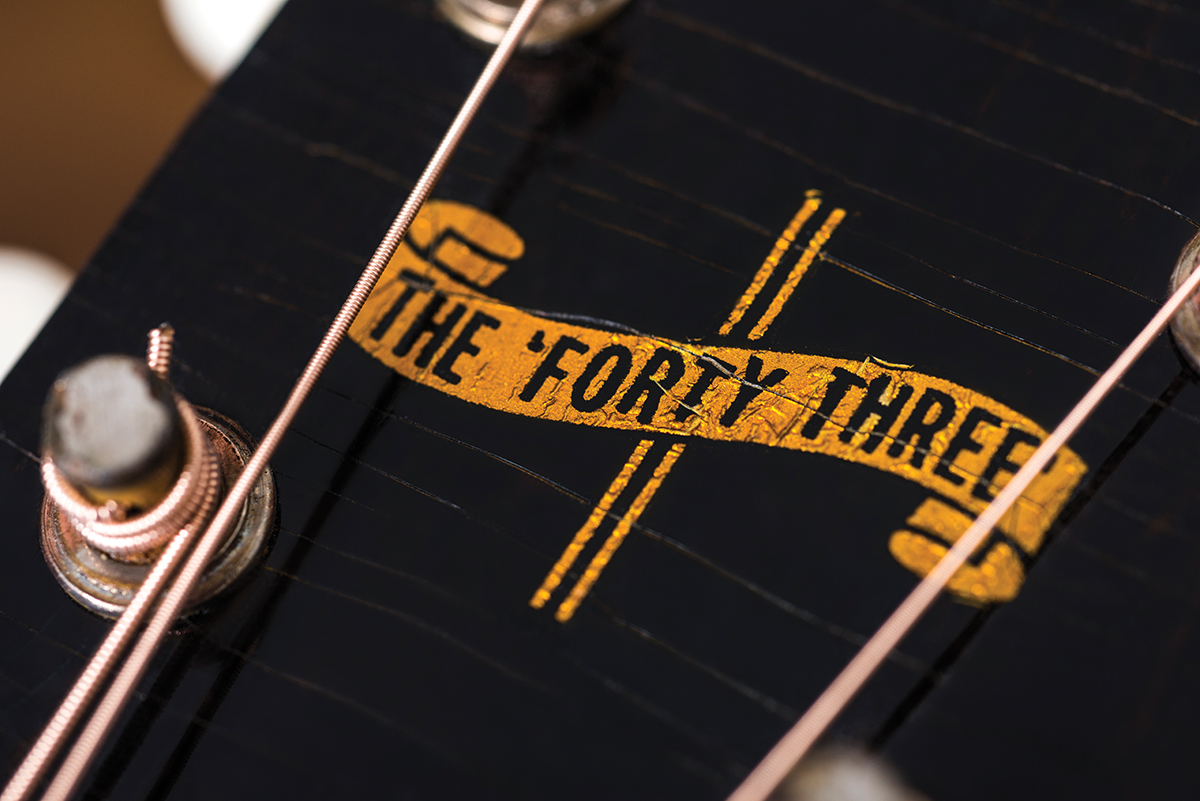 Artificially aged guitars have become commonplace in the electric market in the last two decades, but the opposite is true for acoustics.

This writer’s one previous encounter with a relic’d acoustic was inauspicious, to say the least, but times they are a-changin’ – as evidenced by Canterbury-based luthier Alister Atkin’s slope-shouldered dreadnought, The Forty Three. 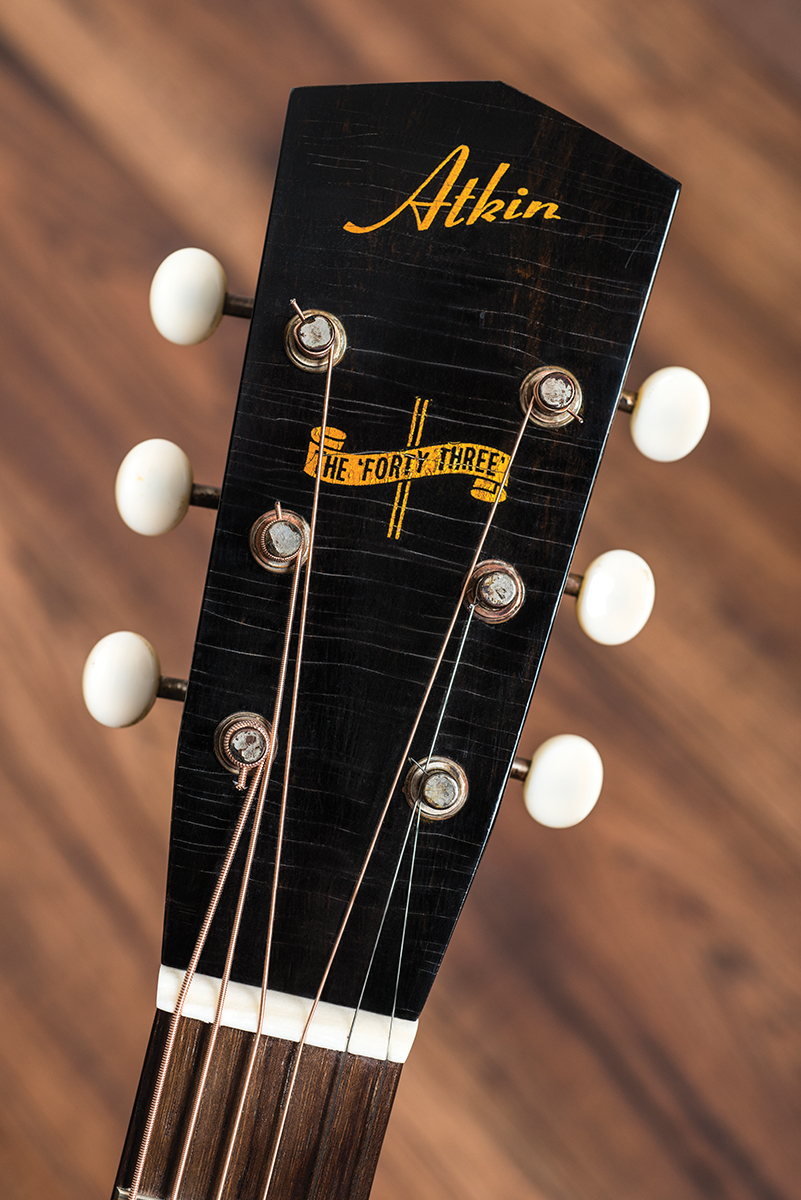 Rather than content himself with a straight-ahead vintage Gibson J-45 clone, Atkin’s aim was “to capture the aura of a guitar that has been played for the last 70 years”.

Atkin began distressing finishes by chance when building a limited run of J-45 replicas for the Buddy Holly Foundation. One of the guitars accidentally picked up a ding so Atkin figured ‘why not’ and set about copying the extensive play wear on Holly’s original. Originally intended as a one off, customers who saw the guitar soon began placing orders for relic’d finishes of their own.

Not all aged guitars are created equal but Atkin takes a holistic approach. Of course you get extensive lacquer checking and tinted lacquer over the bindings, but look inside and you’ll see dust on the back and the braces. Even the label looks a bit ‘tired’.

Digging deeper we learn that Atkin uses a different formulation of lacquer for those guitars destined for relicing and the thickness is reduced because up to 33 per cent less nitro is sprayed. Although Atkin’s website doesn’t make a big deal of it, the sitka spruce top is roasted. 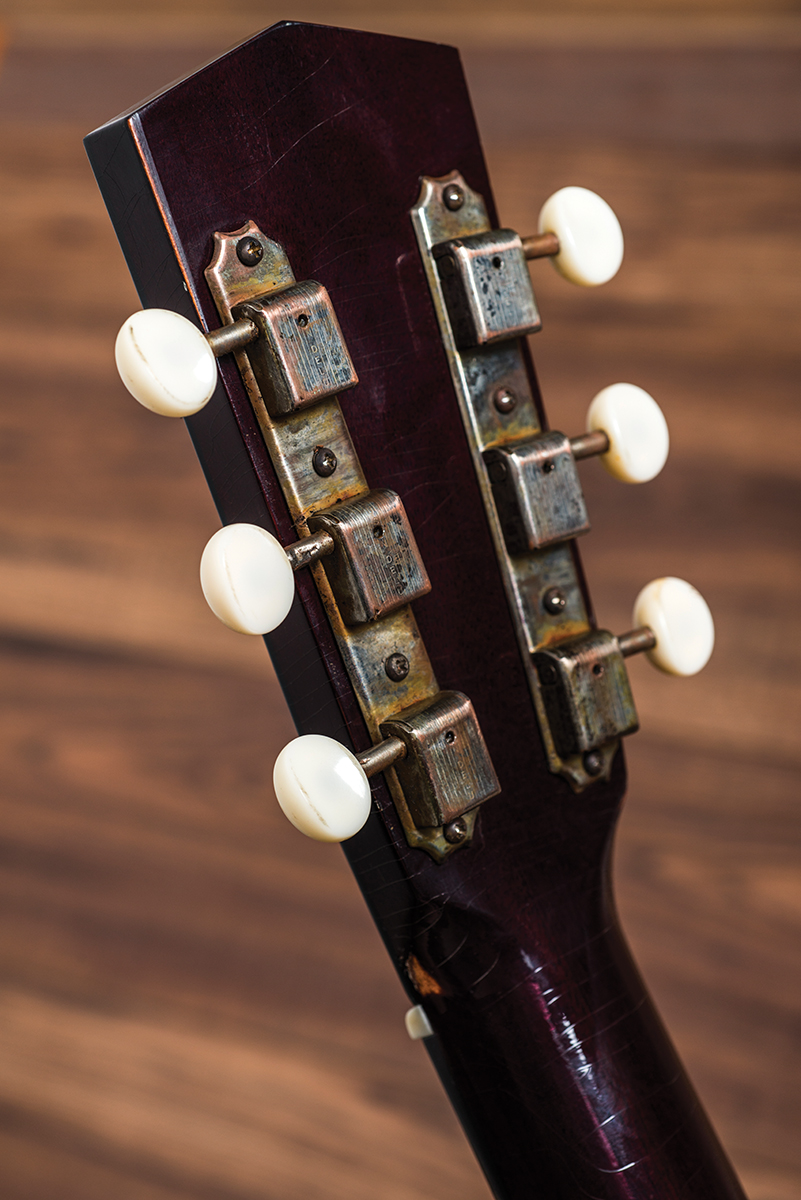 The process, also known as torrefaction, releases moisture from the wood and crystallizes the resins.

It’s argued the same things will happen to spruce over six decades, but Atkin’s method reduces this process to about 60 minutes. He also freezes the wood, with the intention of helping his guitars achieve a matured and played-in tone from the get go, and eliminating any potential shrinkage in the timber.

This is why the top plates are jointed after torrefaction, when the originals may have shrunk by up to 1/8-inch. 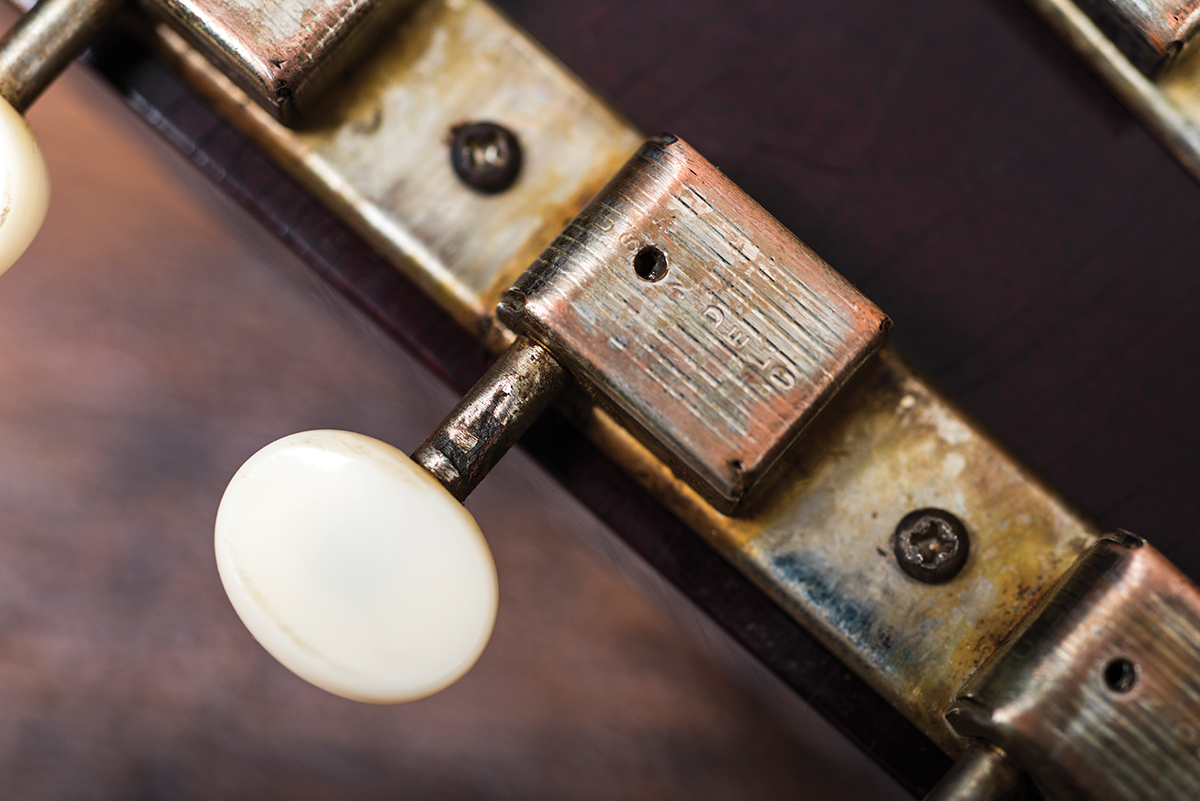 The hardware is meticulously aged, including the three-on-a-plate tuners

The result is a guitar that has a more ‘vintage’ voicing, but is more stable structurally, too. However Atkin is no slave to the vintage aesthetic because he incorporates a two-way truss rod and uses a two-bolt method for neck joints that’s similar to that used by Collings. Since Atkin’s clients include a number of pro players, ease of repair is considered as crucial as tone.

Fixtures and fittings include a bone nut and saddle, bone bridge pins and a set of appropriate ‘no line’ Kluson-style three-on-a-plate tuners. The tuners are artfully aged and have an encouragingly smooth and positive action, but we think unbleached bone might suit the overall aesthetic of this guitar a tad better.

Atkin informs us that the back and sides are Honduran mahogany and Indian rosewood is used for the fingerboard and bridge. The rosewood has a particularly beautiful colour and it’s sanded and buffed to create a smooth vintage feel that further enhances the playing experience. 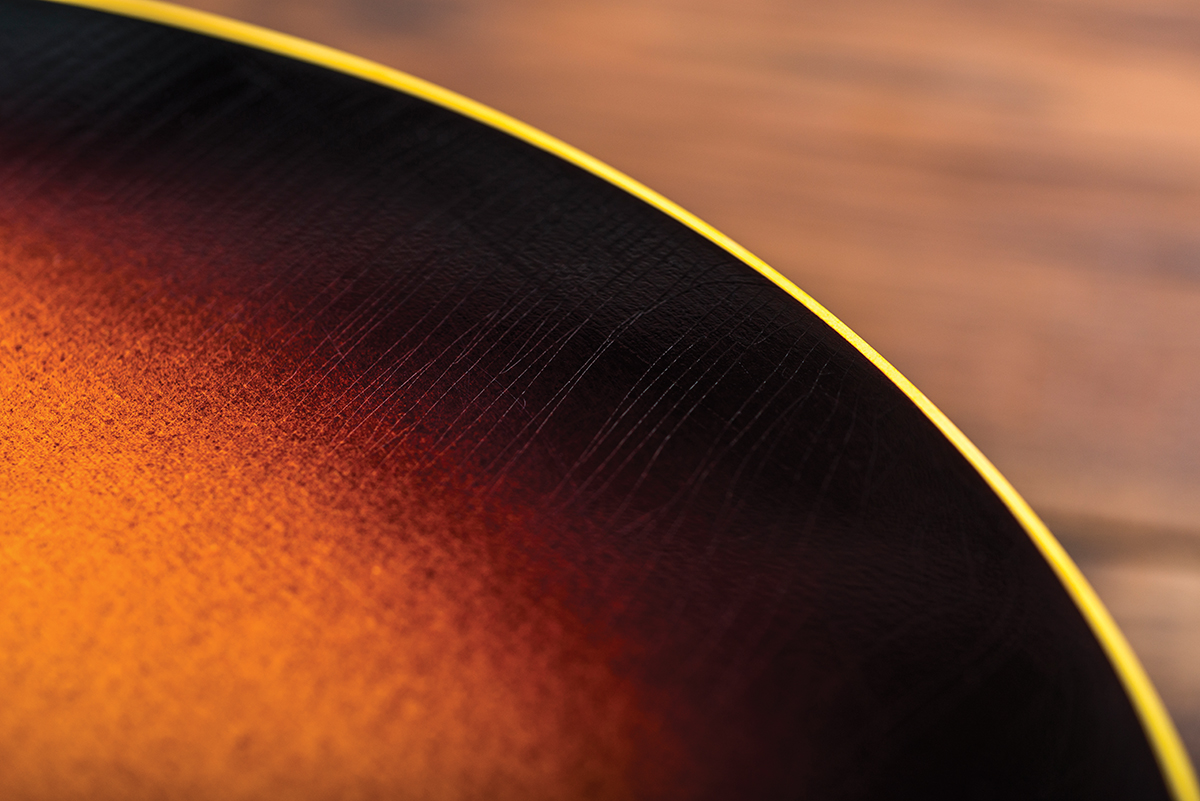 The lacquer checking is subtle, but artfully executed

The celluloid pickguard with its soft bevelled edges is another classy touch. Atkin has them made in the US, each with a uniquely individual appearance. We’re not certain if the headstock logos are decals or silk screened but they look utterly fantastic. The deep dark gold colour with subtle relicing is enhanced by lateral checking and grain sinkage.

In Use
Last month we looked at the Fairbanks F20-S – a recreation of the 1930s Gibson Nick Lucas model. Although the Fairbanks is a jewel of a guitar producing a very fine tone, there is nothing especially ‘vintage’ about its sound or feel. In contrast, in every department The Forty Three is one of the most convincing vintage-style acoustic guitars that this writer has ever encountered. 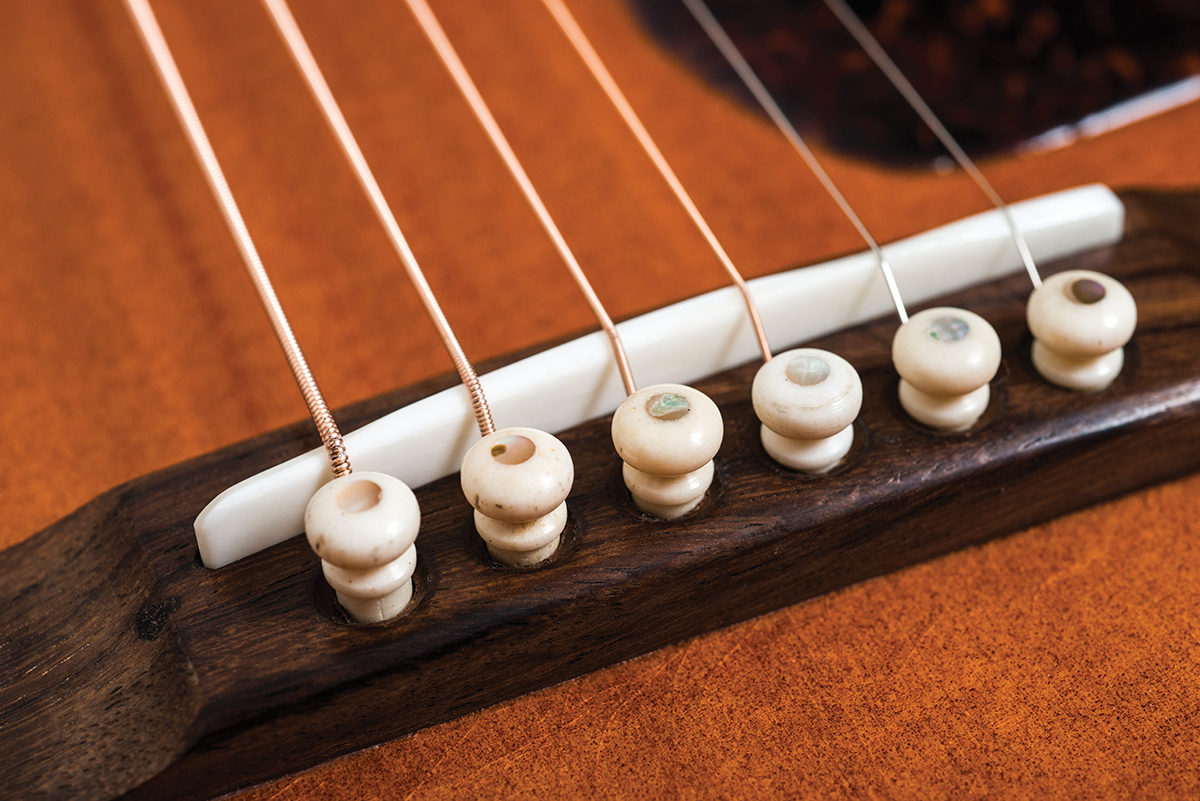 No doubt the looks would have a powerful influence on anyone’s perception but the effect would be fleeting if the sound couldn’t back it up. Based on our experience of various old Gibson guitars, we would say The Forty Three is eerily evocative.

Although it’s a slope-shouldered variety of dreadnought, the bass is powerful but well proportioned and far from boomy. It has an enjoyable punchiness, but there’s a woody and rounded quality to the notes rather than a cutting front end or a twangy bite. 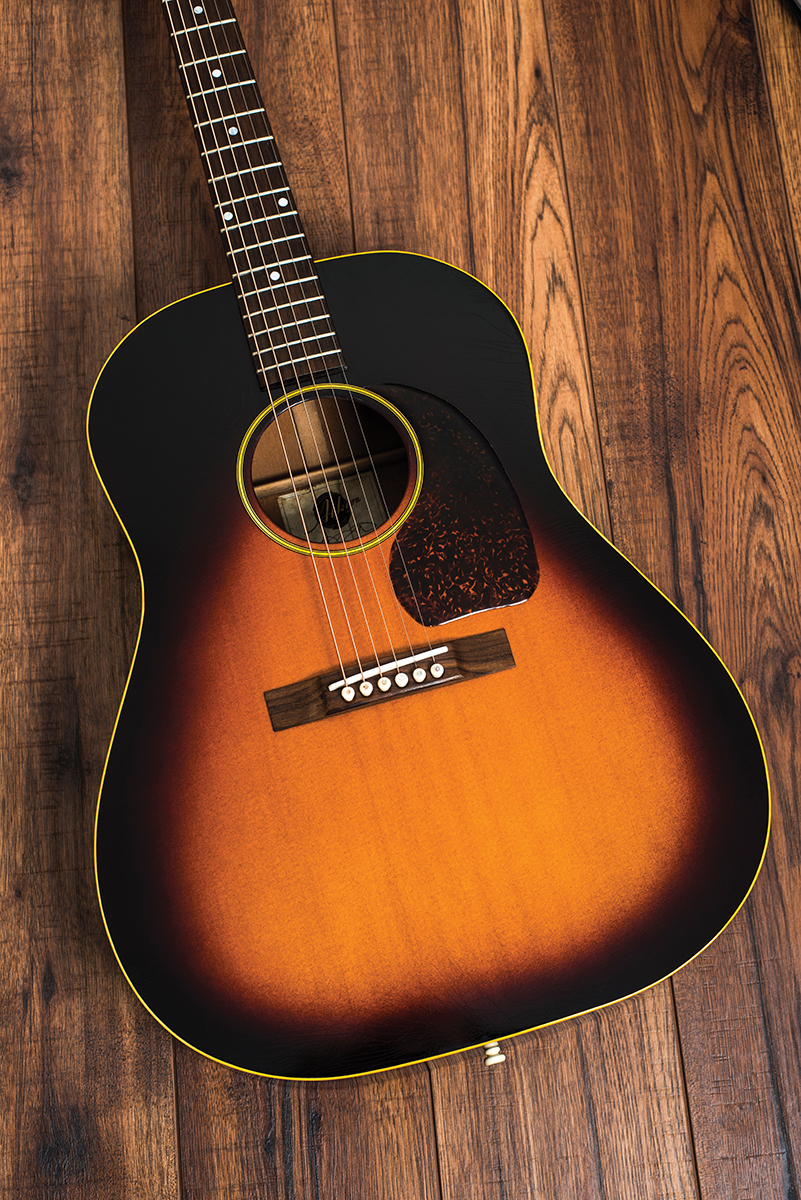 In a sense it’s a similar story at the other end of the frequency range because The Forty Three is totally devoid of shrillness. There’s more than enough brightness to provide clarity, but it’s a sweetly dark sparkle rather that a cutting ‘kerrchang’.

So instead of the classic scooped mid ‘boom-chakka’ dreadnought response, you get something far more refined and midrange focused. This contributes to outstanding string-to-string transitions and properly defined chord voicing. It also means The Forty Three is equally well suited to strumming and fingerpicking, so long as you’re a picker who can deal with the string spacing.

The medium depth ‘C’ neck profile may be slimmer than an original’s, but it contributes to the sense of old slipper comfort. When we first take this guitar out of its hard shell Hiscox case, country rhythm playing seems like the obvious place to start and we’re rewarded with the kind of tones you’ve heard on countless classic records. 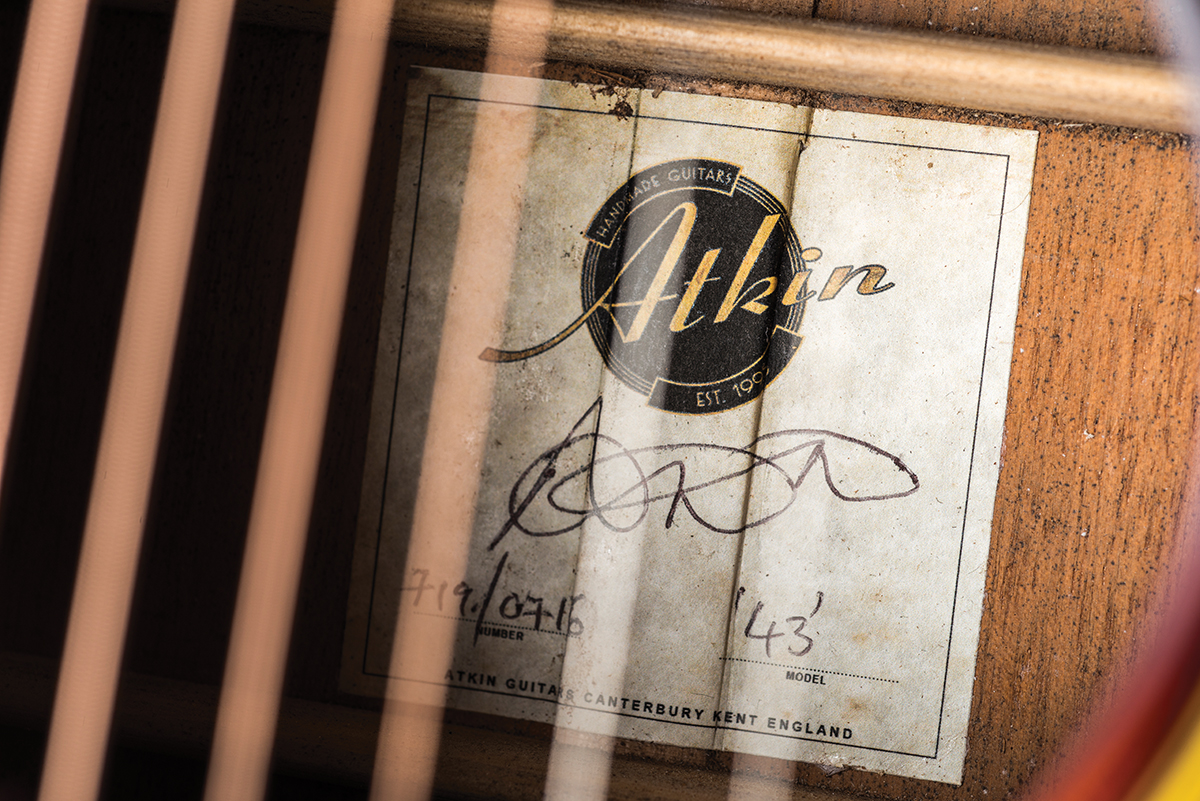 Moving onto fingerpicking, it’s like the brooding hush you might get from Springsteen’s solo work or the intimacy of early Davey Graham. The natural balance and compressed dynamics, combined with the rock-steady tuning and easy action, make it so easy to play.
You’ll find dreads that are louder, brighter and more powerful, but this guitar wasn’t designed for that. Instead Alister Atkin set out to replicate the look, feel and sound of a vintage ‘banner’ J-45 and we can report he has succeeded – and then some. 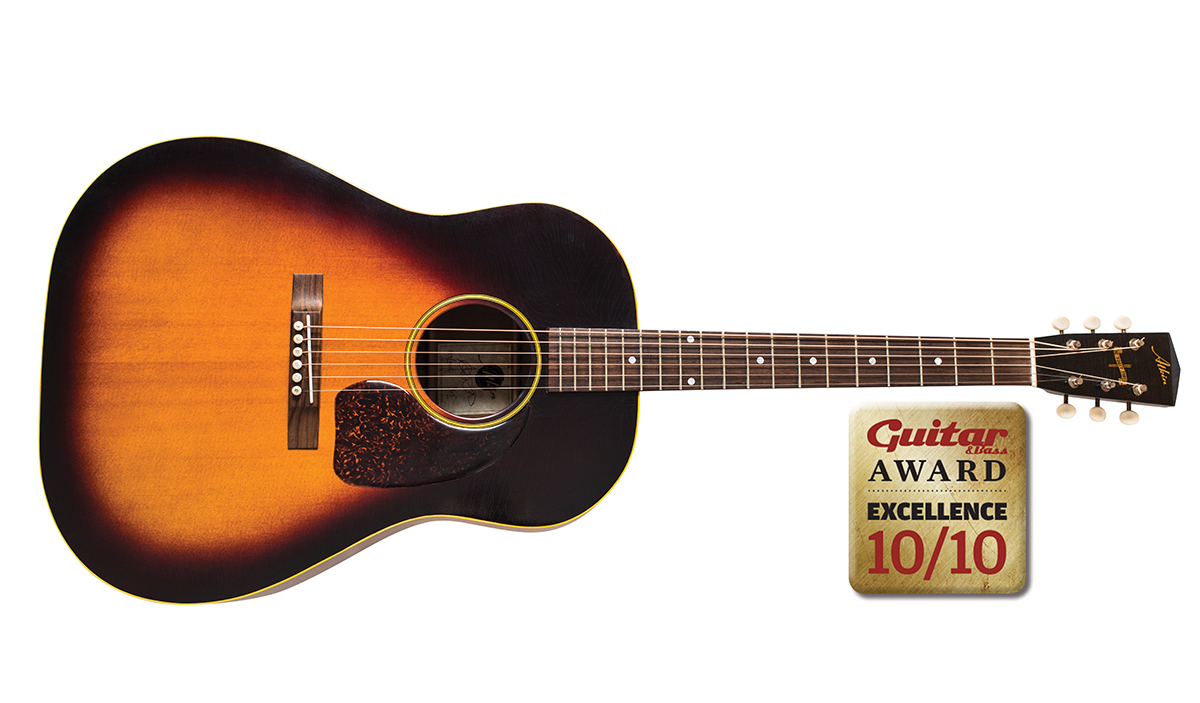 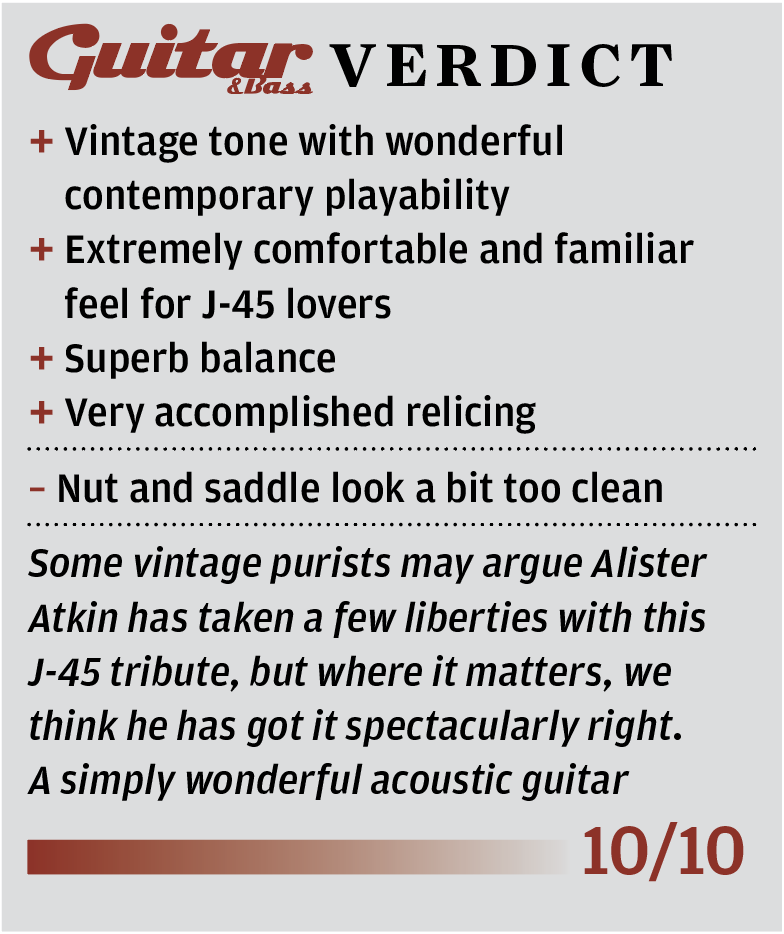