Audio-Technica’s foray into the wireless world comes with fine quality built in and the ability to switch between two amps, or an amp and a tuner. 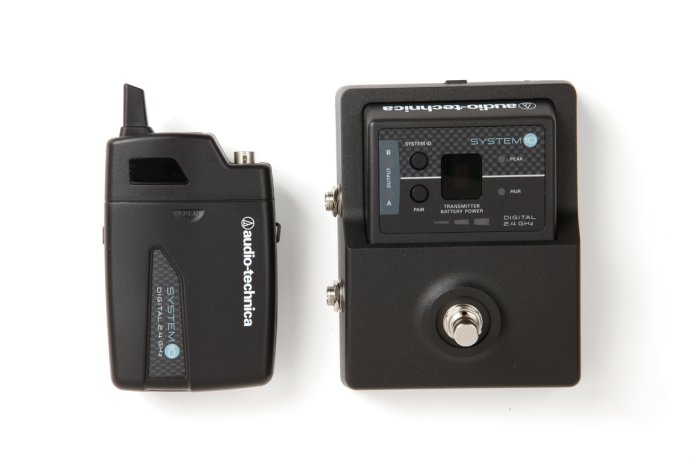 The best thing about guitar leads is the way they never get twisted, tangled, stood on, tripped over, mixed up or lost, and don’t restrict your movement in any way. Oh, and the way they don’t cause any signal degradation whatsoever, no matter how long they are. They’re great, aren’t they?

No, alright, they’re a pest. So it’s no wonder some people invest in a wireless guitar system – and no wonder a company like Audio-Technica, best known for its microphones and headphones, should want to get in on that market. But this isn’t just an invisible cable: it’s also an ABY switch, allowing you to hop between two amps (or between one and both, or between an amp and a tuner) without being wired up to either of them. Nice idea.

The System 10 Stompbox is a digital device but it’s 24-bit and we are promised ‘ultimate sound quality’. You’ll still need two leads to go from the receiver to your amps/pedals, but you’re all clear at the guitar end – with just a small transmitter clipped onto your strap or belt – and can crowdsurf freely until your worshippers’ arms get tired. Sadly there isn’t a second footswitch for choosing between ‘A or B’ and ‘A and B’ modes, just a little slider at the rear of the unit.

The digital display allows you to select which transmitter to link up with – it can work with up to eight – but if you’re using it with a single guitar you should never have to touch that stuff.

In Use
With two amps on standby, we power up the receiver’s 12v adapter, then plug the transmitter into a guitar and hold down the power switch for five seconds to turn it on. Almost instantly we have happy blue lights on both units, and when we switch on the amps we’re cooking. Wow, who said this wireless business was complicated?

There’s no obvious ‘digitalness’ in the sound – maybe just a bit more clarity and edge than going through two full-length cables. Audio-Technica claims an operating range of 60 feet in a clear environment with no interfering signals, and that doesn’t seem unrealistic. Plugged into an amp in my loft studio, I strummed my way down two flights of stairs like an electrified wandering minstrel and could still hear it blasting away; it only started cutting out at the very furthest corner of the building.

The only real pity is that there’s a slight delay between stomping and the actual switching. This is most noticeable in ‘A or B’ mode, where the little slice of silence as it jumps from one output to the other is quite jarring. Mid-song amp-hopping’s probably out, then.

Verdict
It has obvious limitations, but the System 10 Stompbox will impress you with its simplicity as well as its sonic purity – especially if all you want it to do is mute your amp while you tune up. Been thinking about wireless? Maybe it’s time to make the switch. 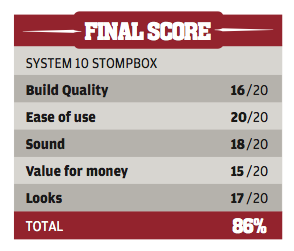