An attenuator and an amp, all in one? Yes, Bad Cat’s unique Unleash is all about volume – less of it, or more… or lots, lots more. 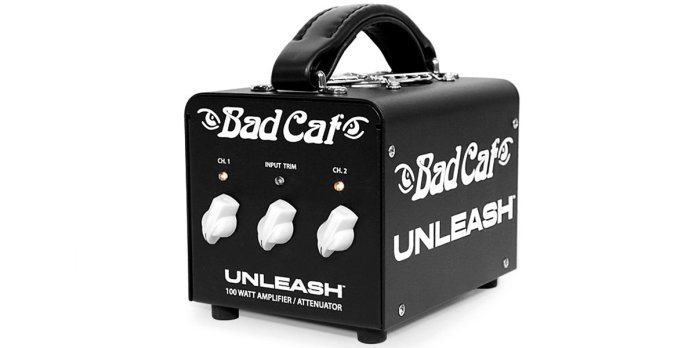 The Bad Cat Unleash is an attenuator, but it’s also a 100W Class D amplifier weighing in at a mere 4.5lbs and measuring 5.5″ x 5.5″ x 7″. Essentially it can make loud amps quieter, quiet amps louder and, more intriguingly, bolster your regular sound through an extension speaker.

Alternatively, you can leave your combo’s onboard speaker connected as usual and route the signal to the Unleash from the extension speaker output. Set your amp exactly how you like it, and then use the Unleash to send that tone through an extension cabinet with up to 100W of extra push.

There are three controls on the front panel. The best method is to start off with all three fully anticlockwise, then turn up the Input Trim until the green overload light starts to flash. Each channel has its own volume control, so you can pre-set two levels and footswitch between them. Since the Unleash runs completely clean, there’s no extra overdrive when the higher setting is selected.

There’s also an FX loop for time- and modulation-based effects, and a direct output. Sounds
Switching the source amp to standby demonstrates that the Unleash produces virtually no noise and its cooling fan is silent, so any background noise you may hear will be coming from the guitar amp.

A Speakon to jack cable is provided, which is fine for extension cabinets, but combo users may require a female jack coupler. Speakon connectors are sensible because they cannot be pulled out accidentally, but it would be better if a Speakon to female jack cable were included too.

With the Unleash used as an attenuator, you may notice some diminution in treble sparkle and transparency – and we felt low notes lost some snap and pop. These issues are most noticeable with lots of attenuation, and the Unleash sounds far better when less is applied.
Even so, we found the volume boost capabilities far more interesting and impressive. Although treble does seem to increase very slightly along with volume, the Unleash is essentially transparent. It’s a bizarre experience when a device that’s small and light enough to put in your pedal bag can turn your favourite small amp into a fully-giggable monster with no loss of tone or touch sensitivity.

Verdict
Using the onboard speakers our test combos seemed to sound just the same… but louder. With an extension cabinet they sounded significantly louder, but also bigger and clearer.
When you consider the alternatives are lugging around a second amp or going through PA speakers and relying on monitor wedges, the Unleash seems like a no-brainer. It’s a unique, practical and affordable product that could finally solve the tone-versus-volume dilemma for legions of small amp fans.