A cool semi-solid that takes its design cues from Fender offsets. Chris Vinnicombe finds out if they Bilt this pretty for rock ’n’ roll… 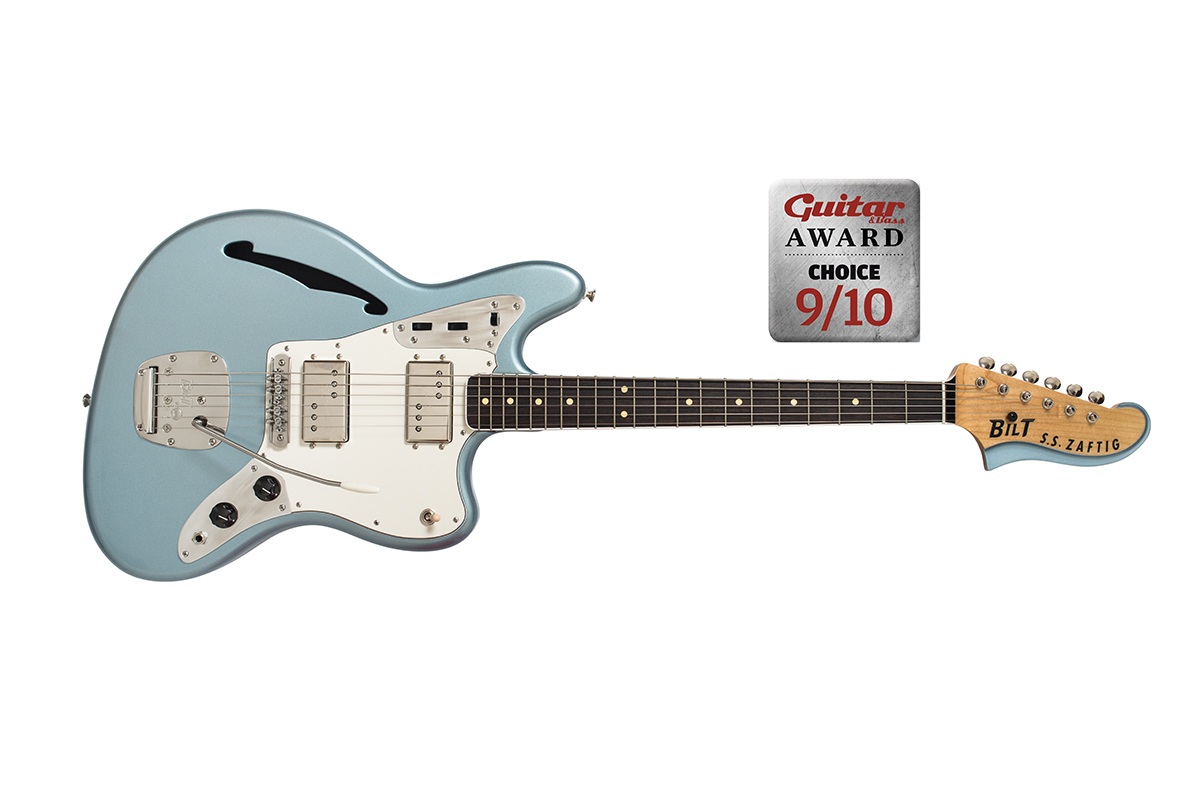 Like every one of Bill Henss’ and Tim Thelen’s creations, the S.S. Zaftig is made in Des Moines, Iowa – the Midwestern State Capital that also gave birth to masked metal titans Slipknot and travel author Bill Bryson.

Henss and Thelen describe their processes as employing “the latest building techniques as of about 1949”, but the S.S. Zaftig’s lines are drawn largely from 1960s inspiration, borrowing heavily from the Fender Marauder, Starcaster and Jaguar to create a kind of ‘guitar that might have been, but never was’, that’s similar in spirit to some of Dennis Fano’s instruments and Fender’s own recent Pawn Shop Series.

“Bill and I started making these out of our repair shop,” explains Tim, “so all of our design choices are informed by the need for repairability, which in turn makes for longevity, and that increases the chance that it’ll make music for a long time.”

The pair’s interest in offset designs was triggered when they collaborated on a rosewood Jazzmaster-style guitar for Nels Cline in 2008: “That was what kicked us into gear to start exploring offset guitars,” acknowledges Tim.

That exploration resulted in the Revelator, a Fender Marauder-inspired model loaded with onboard effects. It has now been joined in the range by the Revelator LS (‘less stuff’, sans effects), the Volare (a reimagined Starcaster-alike), El Hombre (a kind of mash-up of Gibson SG and vintage Japanese influences) and the generously proportioned, semi-solid Zaftig we have before us. 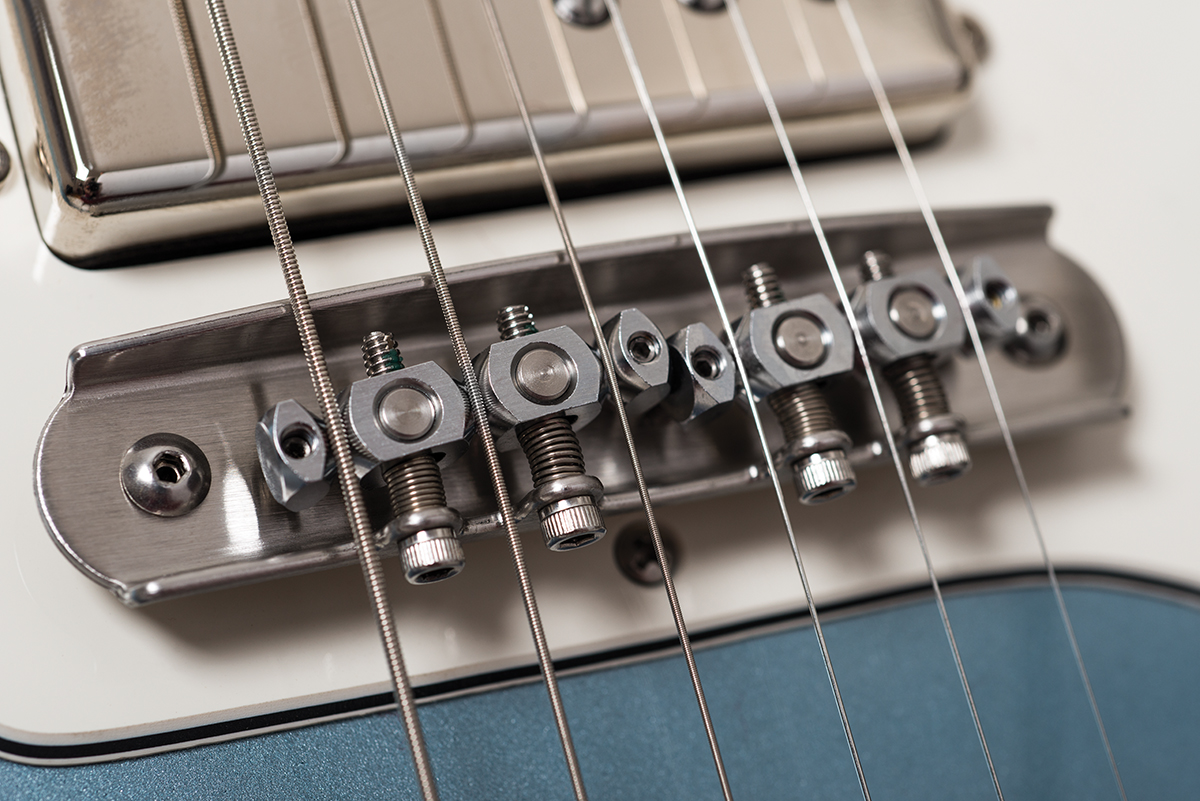 There are no onboard effects here (custom requests can be discussed with Bill and Tim), but there’s plenty going on all the same: Jazzmaster-style wiring on Jaguar-alike control plates governs a pair of Lollar Regal Wide Range-inspired humbuckers wound to a punchy 10.7k while a Mastery Offset Bridge and Vibrato tailpiece offer a beautifully machined, buzz-free upgrade on a vintage-style system.

The semi-solid alder body has a solid block that runs from the neck pocket to just behind the bridge and two 0.5-inch legs beneath the vibrato mounting screws. Tim estimates that the guitar is “76 per cent hollow” as a result. 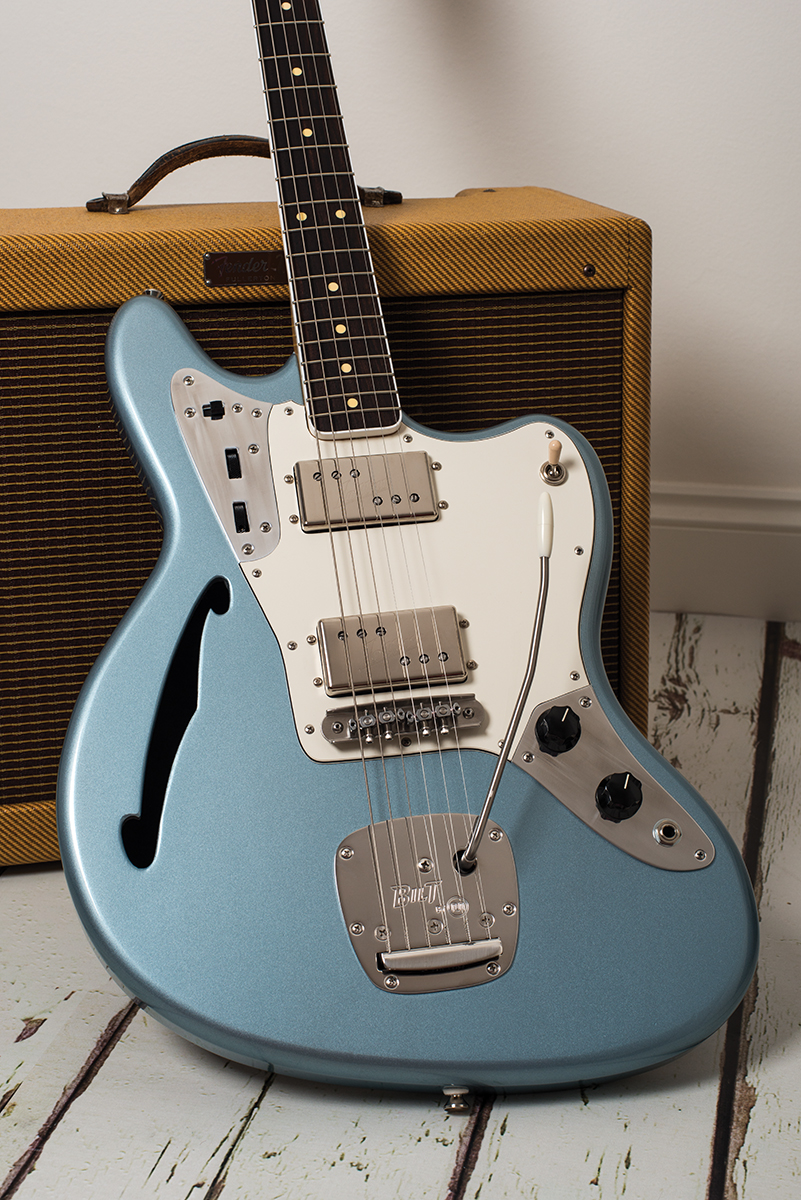 Some detractors may find the lack of a nitrocellulose lacquer finish hard to stomach in this lofty price bracket, but the thin poly Ice Blue Metallic that the Bilt guys have employed here certainly doesn’t inhibit resonance (more on that later) and doesn’t have that ‘dipped in plastic’ appearance of some poly-finished instruments, either.

There’s visible evidence of a human touch and even if that also manifests itself in the form of a slight scruffiness around the f-hole, we’re nitpicking – it’s a simply tremendous-looking electric guitar to behold.

S.S. Zaftig In use

We know what you are thinking: a massive headstock and semi-solid construction mean guaranteed neck dive, right? Happily, and perhaps miraculously, this is not the case and the Zaftig is very comfortable to play indeed when strapped on.

Despite the lack of forearm or ribcage/belly contouring, it lives up to its name and proves to be a figure-hugging experience, whether standing or seated. The combination of semi-acoustic air and the Mastery bridge delivers unplugged sustain that’s way beyond what we’ve come to expect from offset solidbody designs – particularly on the D and G string – and bodes well for the Zaftig’s electrified performance. 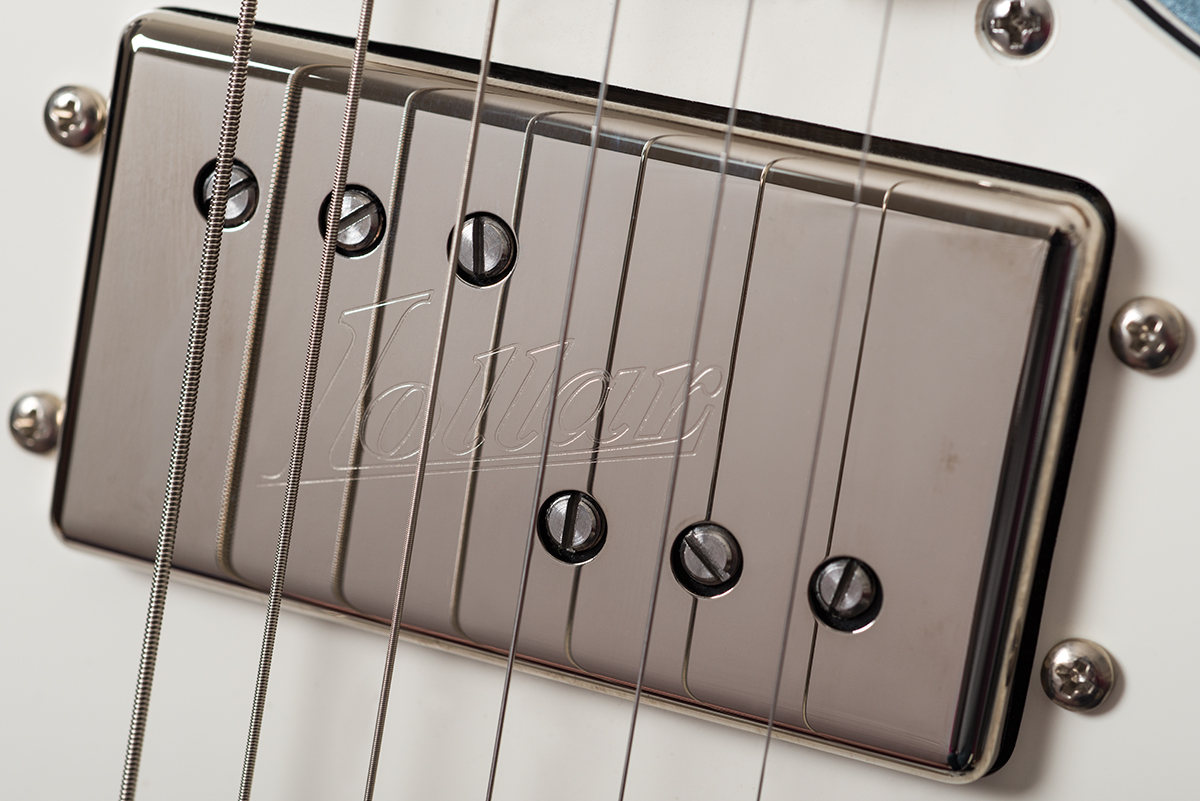 The presence of pickups bearing the surname of the man who literally wrote the book from which many of the modern boutique pickup winders learnt their trade is always reassuring. Plugging into our tweed-y review amp at stage volume is immediately grin-inducing; there’s a live, animal edge to the controllable way notes bloom easily into feedback that fans of Neil Young, Wilco, Daniel Lanois and the like will adore, but enough muscularity to ensure that proceedings don’t get too thin and scratchy.

A good set of original Wide Range humbuckers with CuNiFe magnets might offer a touch more complexity and richness, but that’s not to say these pickups aren’t an excellent match for the guitar – we wouldn’t change them for a minute. 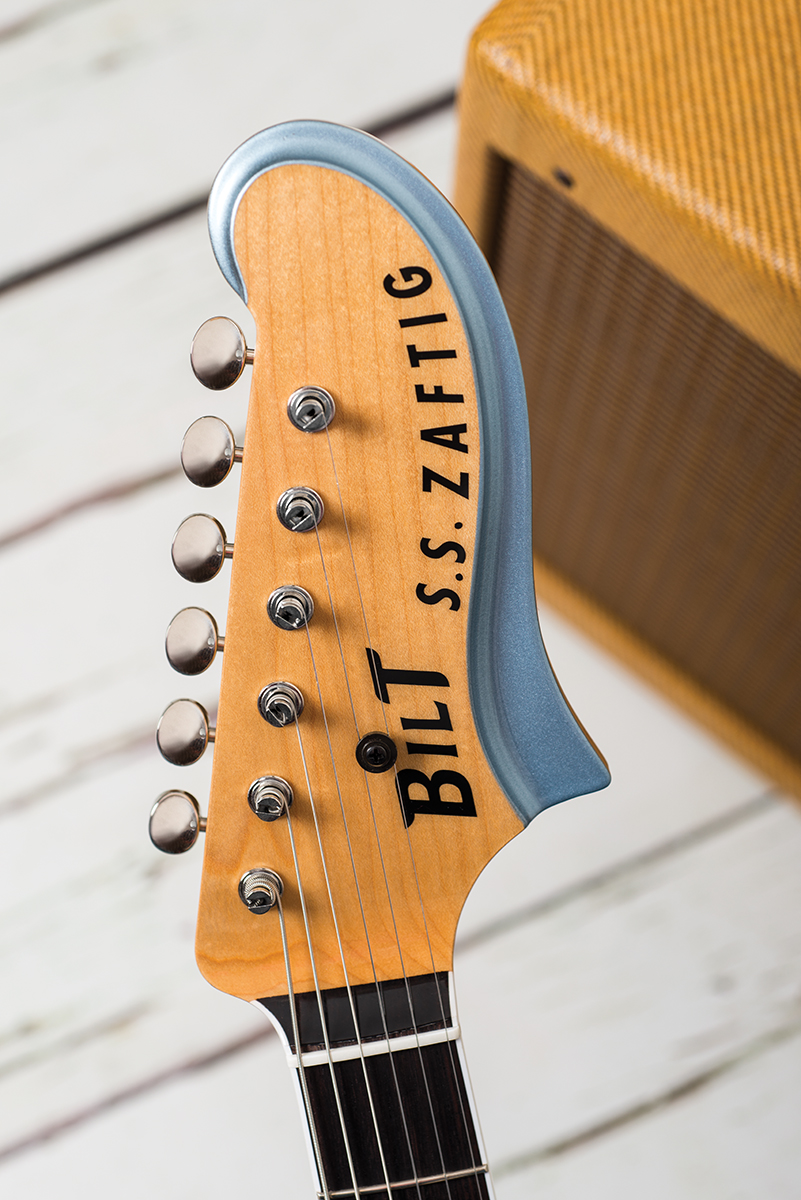 Up the dirt level and there’s a great punch and gritty jangle for indie power-pop and grunge, too, which makes this former mid-1990s teenager very happy indeed. There’s more high-end bite here than our reference set of Filter’Trons, but there’s a similar harmonic complexity and the Regals inhabit that delicious sonic space somewhere between single coils and PAFs very nicely indeed.

Switching to a blackface-style amp inevitably hollows out the midrange and opens up some of the Zaftig’s slinkier, springier tendencies. It proves excellent for Hendrix-y clean rhythm parts and snappy funk. It’s even an expressive lead machine, courtesy of both the neck and middle settings’ combination of rich depth and bite. Also – whisper it – the rhythm circuit sounds good and is a smooth and usable fourth voice, more useful than the woolly oddity found on vintage-spec instruments.

Once again, we’re enormously impressed by the smooth action and stability of the Mastery Bridge – if your offset doesn’t come with one as standard, it’s surely becoming a no-brainer retrofit. Straight out of the case, the Zaftig feels as though it’ll stand the kind of right-hand pounding that’ll make many a stock Jaguar or Jazzmaster exit the field of play, hobbling bloodied in the direction of the tech’s bench.

Given that this writer’s preferences lean towards beaten-up nitro finishes, the feel of bare wood, big 1950s neck shapes and jumbo fretwire, why is this slim and glossy section of timber so comfortable and appealing? The bound rosewood fingerboard’s 9.5-inch radius certainly helps offset (sorry) the skinny vintage-style fretwire when it comes to overall bend-friendliness but, ultimately, this is just an exceptionally good electric guitar.
Sometimes that fact alone tears the rulebook into confetti. 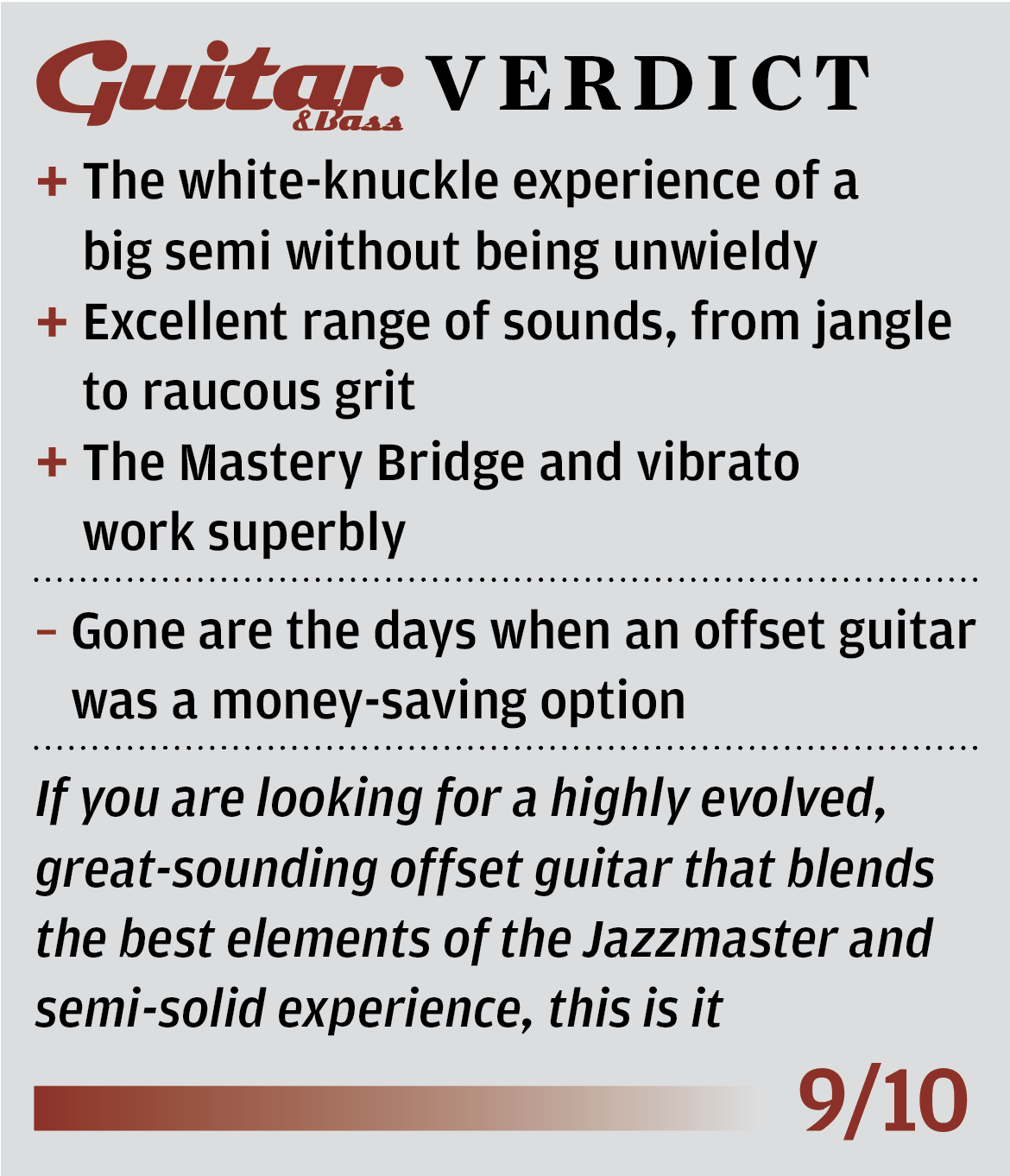