Compact, lightweight, loud and affordable – what’s not to like? Chris Vinnicombe goes on an adventure in Super Wide Stereo in our review of the Blackstar ID:Core Stereo 100 & 150 amps… 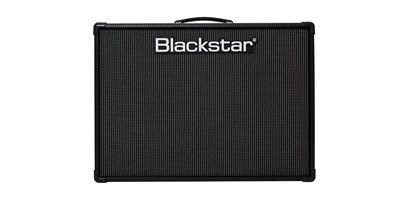 Over the last couple of years, Blackstar’s ID:Core amps have helped redefine expectations of what a home/practice amp can deliver. Imagine that the Northampton company took all of that clever functionality and proprietary tech – six voices, Super Wide Stereo sound, an array of digital effects, deep editing and patch storage via its Insider software, USB recording and reamping – and made it available in loud, giggable boxes that you can lift with two fingers?

That’s exactly what happened. First teased at Winter NAMM 2016 in January, then announced officially at Musikmesse in April, Blackstar’s ID:Core Stereo 100 and 150 not only offer all of the above, but the company has also introduced an onboard looper (accessible via the bundled two-button footswitch) with unlimited overdubs, undo and clear functions, a polyphonic octave effect and a stereo effects loop. All for very tempting prices indeed. 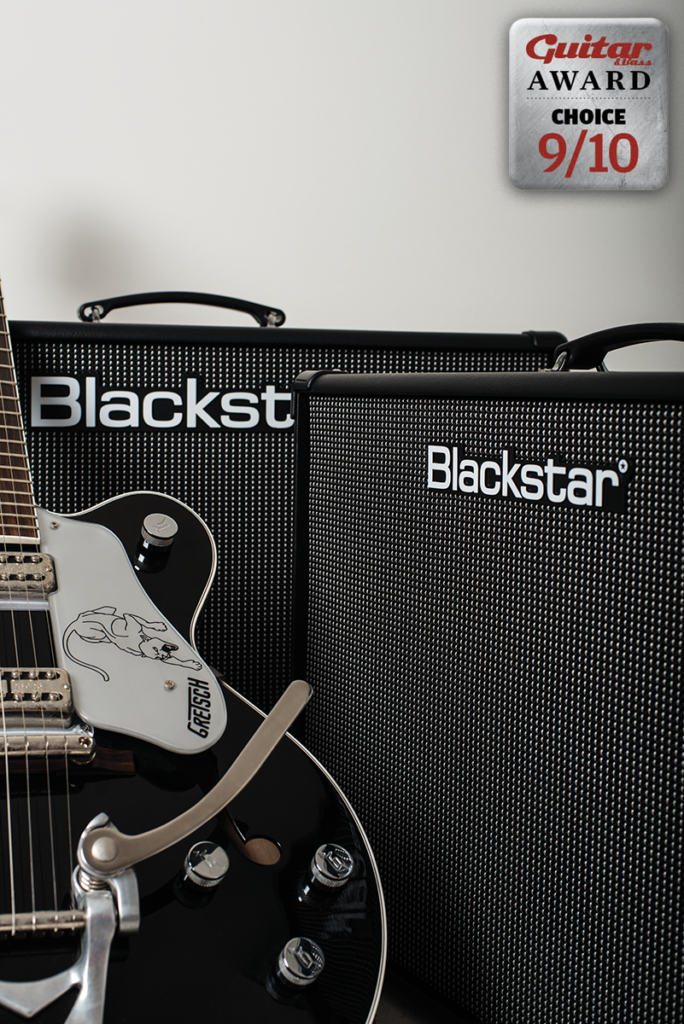 The six ID:Core voices – clean warm, clean bright, crunch, super crunch, OD1 and OD2 – have been enhanced to suit the larger-format models, which comprise the Stereo 100 (2x 50 watts) and Stereo 150 (2x 75 watts). Both amplifiers come loaded with a pair of 10-inch speakers, but the 150’s cabinet is bigger in every direction.

That said, 624(w)x486(h)x259mm(d) is still pretty compact, and its 14kg weight is a breeze to load in and out of venues and rehearsal rooms, compared to a valve combo of similar dimensions. 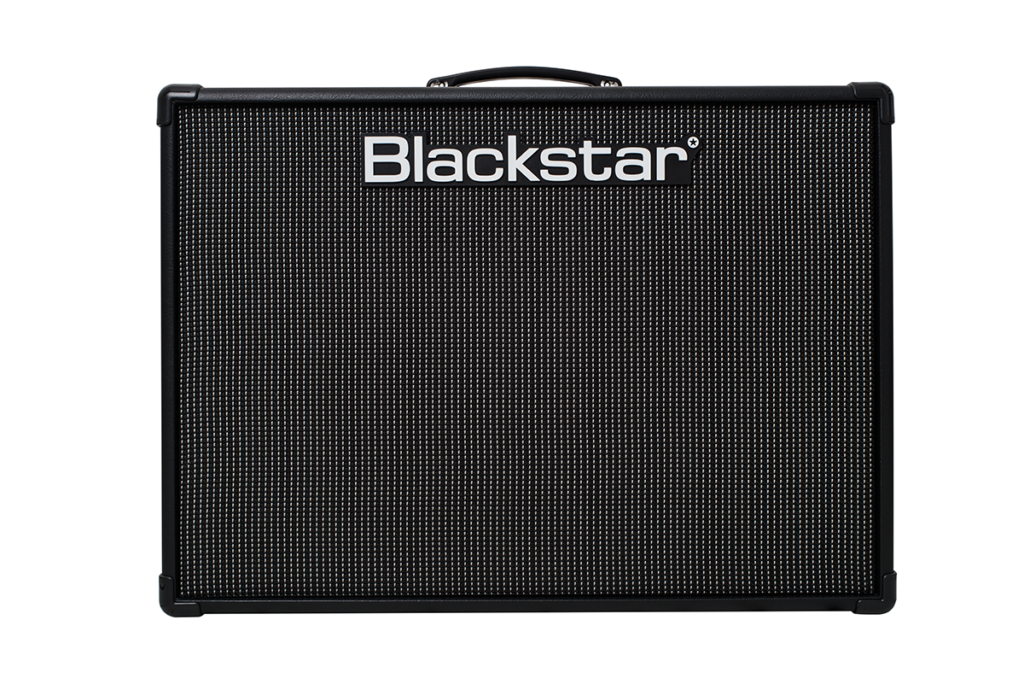 Apart from the differences in physical size and power output, both the 100 and 150 are almost identical.

In addition to a global master volume, you also get gain and volume controls, with the volume control simulating power-amp overdrive and compression in its higher reaches. A three-band EQ is joined by Blackstar’s ISF control for further sculpting of your chosen voice setting. 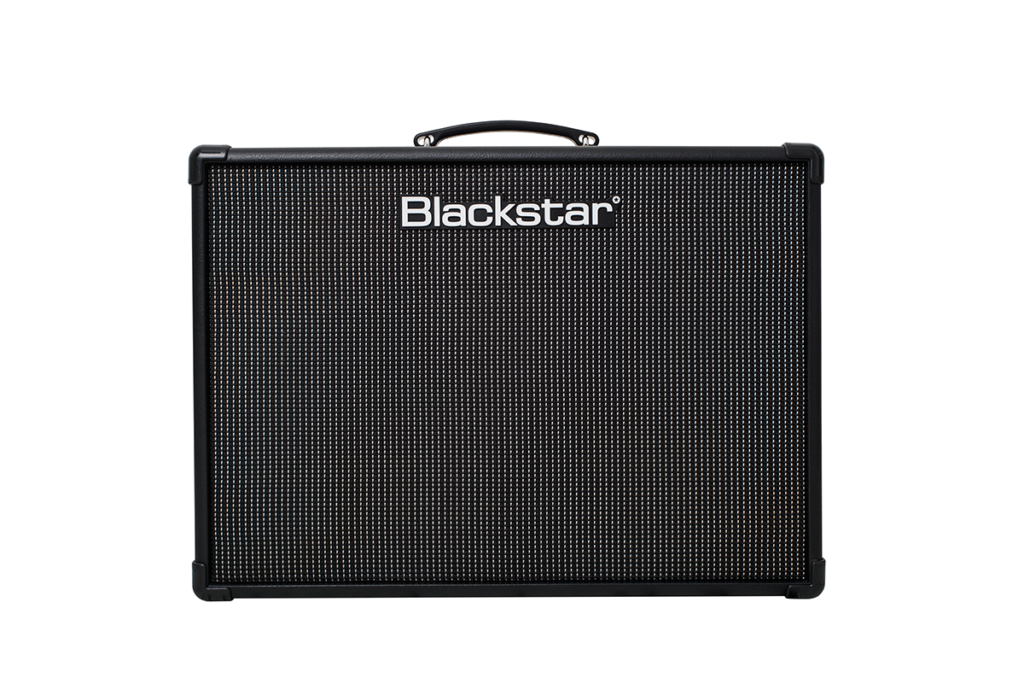 The 12 onboard stereo effects are organised into three banks of four. Phaser, chorus/flanger, octaver and tremolo live in the modulation bank, then there’s a bank of four delays (linear, analogue, tape and multi) and four reverbs (room, hall, spring, plate).
Each segment of the effect type control represents one of the four available within the chosen bank, while the travel of the pot through the segment adjusts an individual parameter, as does the effects level control, although the latter equates mostly to the depth or mix. The tap tempo button can be used to set delay times and modulation speeds, while holding it down – almost like a shift key – in conjunction with the bass control allows you to adjust the low-end resonance and, paired with the treble control, presence. Consult the manual for yet more hidden functionality.

Once you are happy with your sound, you can save it to one of nine onboard patch locations split into three banks of three. Further tone storage, under-the-hood editing and all kinds of clever extras are unlocked by connecting your amp to a computer via its USB port and using the aforementioned Insider software, which is available as a free download for Mac OS X and Windows machines via blackstarinsider.co.uk. 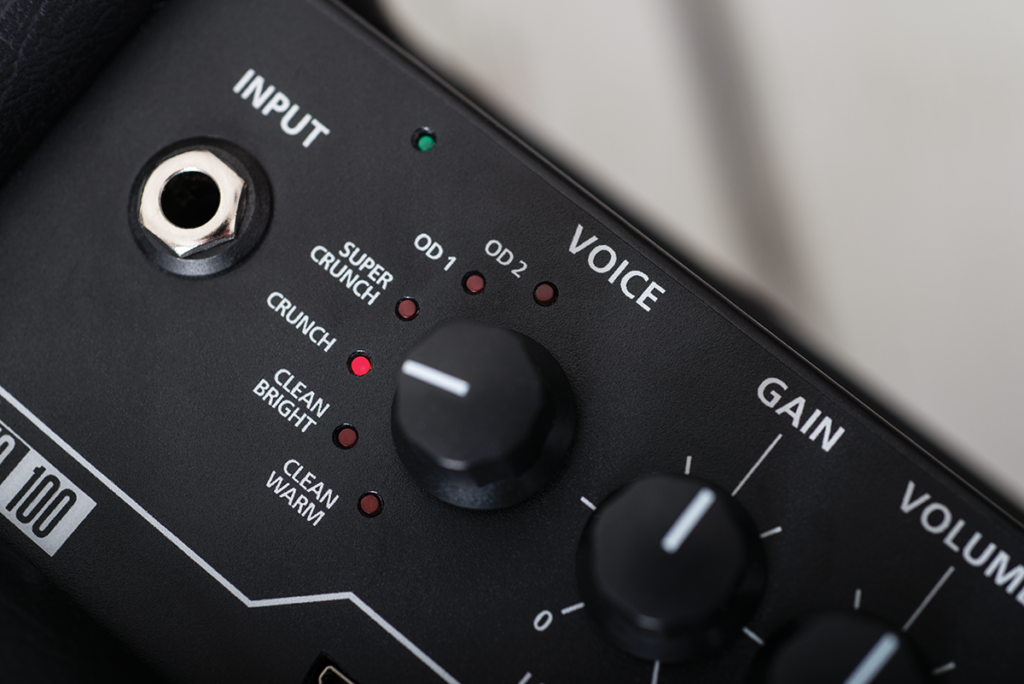 The voice control on both amps offers six distinct tones

Yamaha’s THR100HD £719 sees the Japanese company’s ‘third amp’ idea all grown up and getting a taste of life on the gigging circuit. It sounds excellent but you’ll need to shell out for an additional speaker cabinet. Due later this year, Marshall’s CODE100 combo £349 looks set to pack an awful lot of modelling power and effects into a gig-friendly box and the price is competitive too.

Being a self-confessed 1940s technology curmudgeon when it comes to amplifiers, the first thing this writer tends to do when confronted with a tech-loaded multi-tool such as this is put it into manual mode and attempt to dial in a sound that could get him through the average gig.

Happily, both ID:Core amps pass that test with flying colours: selecting the clean bright voice, setting the gain to three o’clock, rolling the bass back to 11 o’clock and the mids up to about half past two yields a satisfyingly organic, chimey Vox-type tone that bares its teeth nicely when you dig in. It sounds good with a Tele and an ES-335 and can cover 60s pop, modern indie and rootsy Americana, too.

It also responds well to variations in picking-hand attack and tonal changes via the guitar’s controls. Our experience of function-gig volume levels suggests the 100 is more than loud enough to cope – noise levels are low too, even with lively single coils –but if it you need more power then the 150 kicks out much more of everything, and it won’t be found wanting in many real-world scenarios. 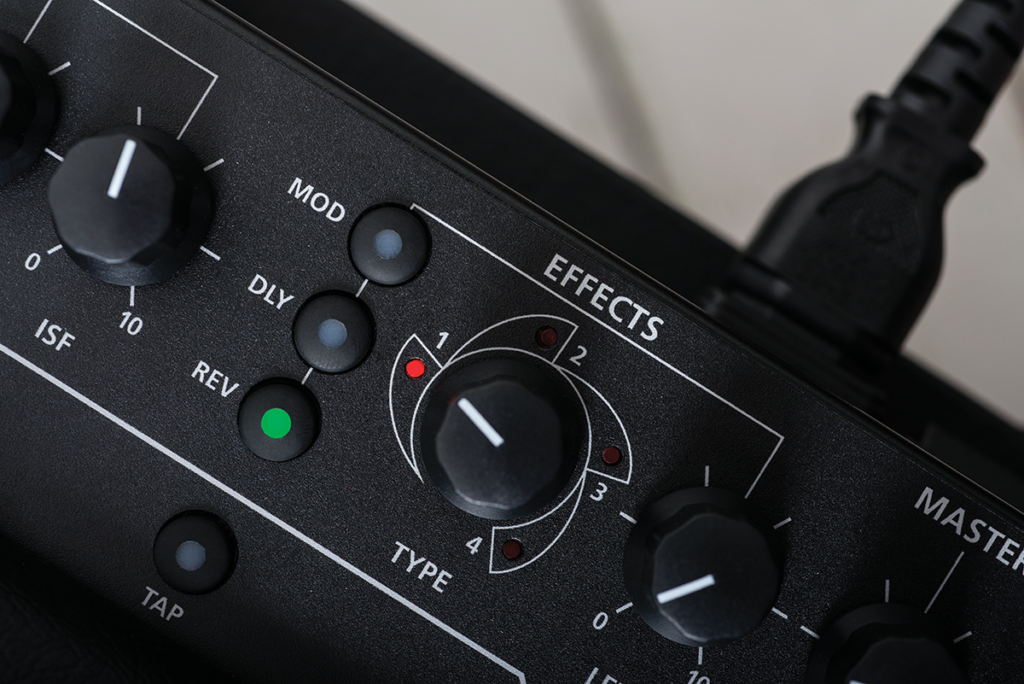 Turning to the effects section – reverb first for this dinosaur, naturally – we’re wowed all over again by how three-dimensional Blackstar’s Super Wide Stereo sound is and how much fun it brings to home playing. Throw the built-in, intuitive looper into the equation and, though it’s easy to spend hours getting lost in a more and more kaleidoscopic Escher painting of layered parts, it’s a powerful compositional aid.

Even if your pedalboard is in danger of becoming bigger than some of the stages you play on, it’s worth exploring the other onboard effects, as there are some nice, grainy delays – again enhanced by the Super Wide Stereo – that are genuinely as good as those we’ve heard from many standalone delay units.

The various higher-gain voices on tap are refreshingly chewy and organic-sounding, with decent string separation maintained and, even if you go looking for it, there’s very little of the fizz that so often plagues affordable high-gain amplifiers. Whether you are a classic-rocker, a metalhead, a punk or a post-hardcore player, there’s sure to be a suitably aggressive flavour of dirt here for you; OD1 and OD2 even come with a preset gate that keeps unwanted noise in check without snapping shut when you really don’t want it to.
At these prices, the amount that Blackstar has managed to cram in is bordering on the ridiculous – for many players in function bands, it would cost only your slice of the fee from one decent wedding gig to pay for either amp outright – so it seems almost mean-spirited to suggest that we’d like to have seen Bluetooth audio streaming thrown into the mix too. 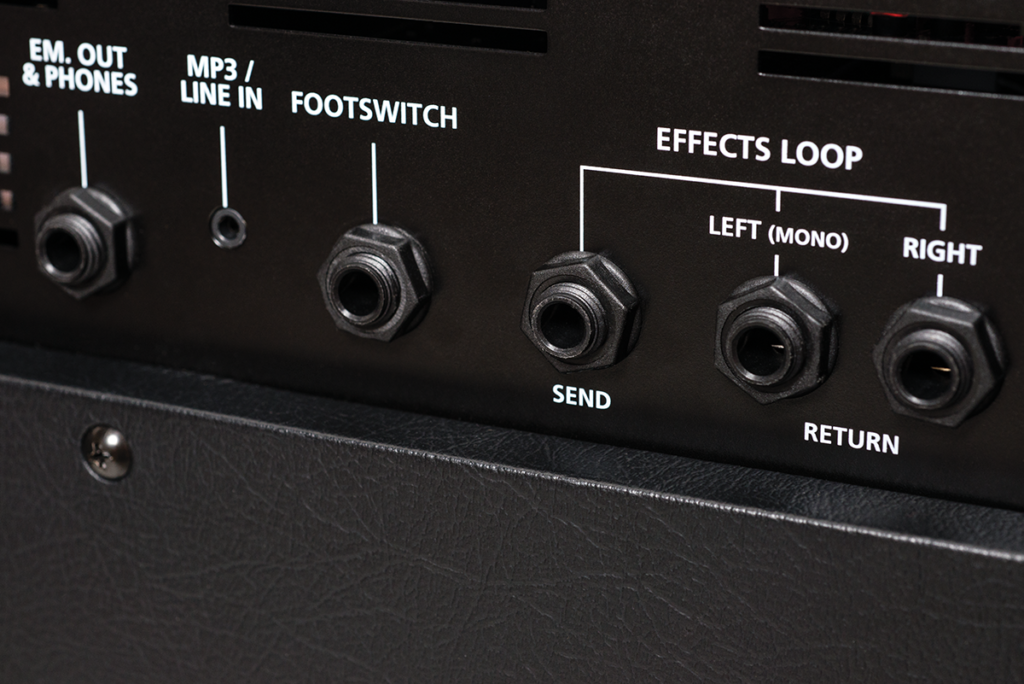 Regardless, we find ourselves edging dangerously towards a phrase that’s close to becoming as well-worn a cliche of guitar journalism as ‘the dusty end’ or ‘plays like butter’: ‘we’ve really never had it so good, have we?’ So, which one to buy? If you are regularly playing unmic’d pub gigs with a hard-hitting drummer, then go for the 150 just to be on the safe side. Otherwise, pocket the difference: the 100 will do nicely. 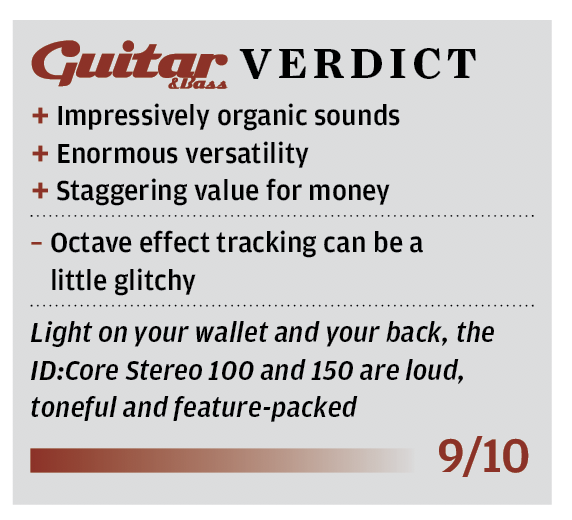