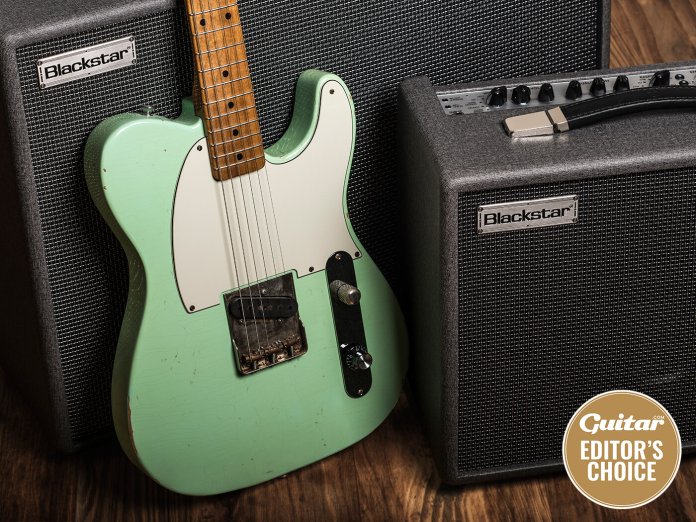 From humble beginnings in a garden shed in the mid 2000s, British amp company Blackstar has become one of the guitar-amplification world’s major players. Although problem-solving tech and form-factor innovations have brought the Northampton brand major successes in recent years, valve-amp knowhow has always been central to its identity, not least thanks to Blackstar co-founder and former Marshall technical director, Bruce Keir.

For Keir: “Amp design has always been about applying elegant engineering solutions to enhance the creative experience of musicians.” Blackstar’s new Silverline Series sees a number of these solutions coalesce in a stylish new range that combines affordability, versatility and broad appeal.

Let’s begin with the cosmetics – aren’t these the sexiest looking Blackstar amps to date? The smart silver-grey cabinets remind us of the White-branded amplifiers (named after Fender’s former production manager and vice president Forrest White) which were designed by Leo and sold with a matching steel guitar between 1954 and 1962. It’s a cool callback to one of the most important periods in tube-amp history, as is the Silverline’s cheeky coffin-style logo, reminiscent of the earliest Marshalls. 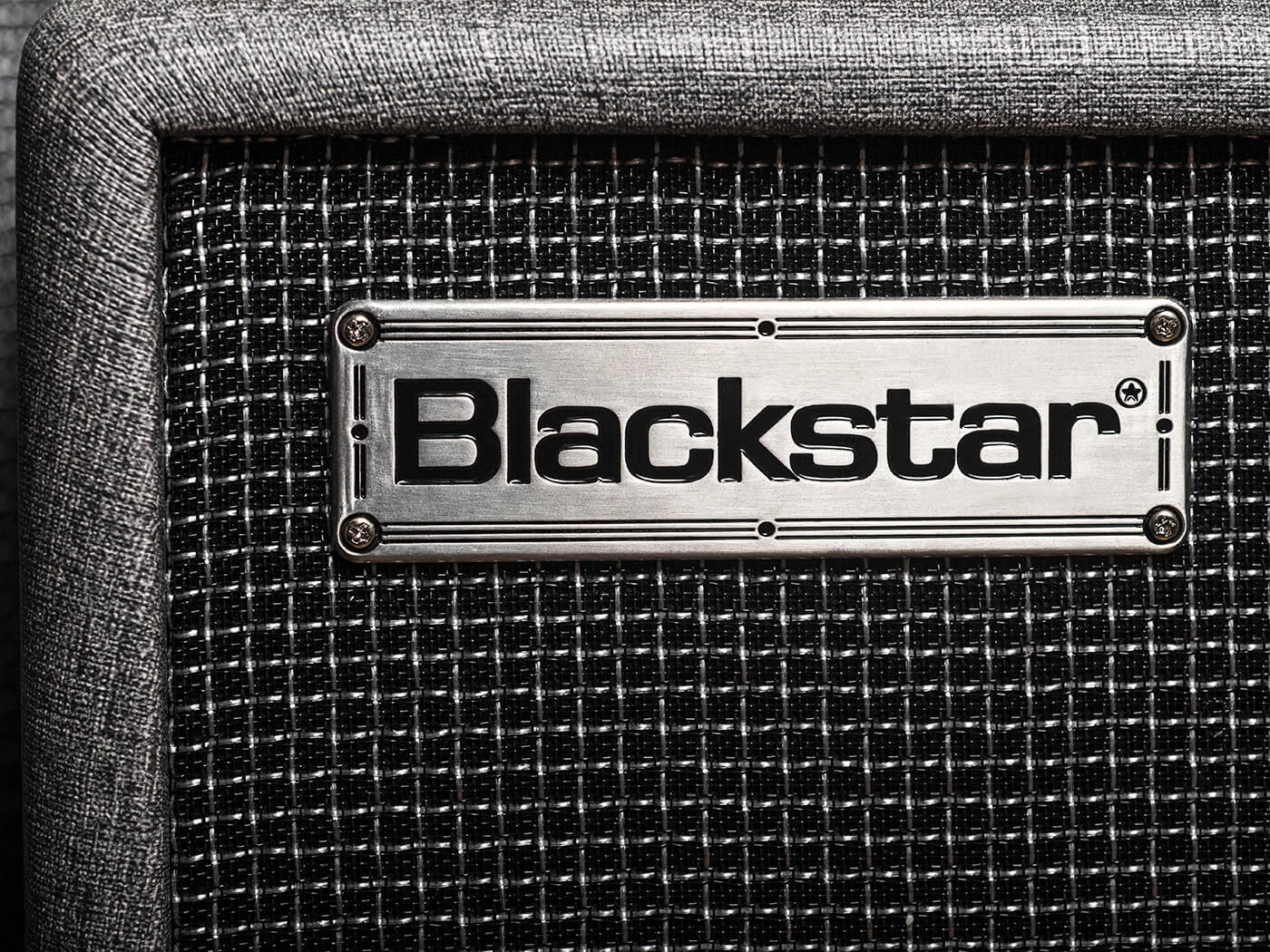 Like a Fender narrow-panel tweed amp, the Silverline cabinet fronts are back-angled to aid projection. But while the mini chicken-head knobs on the brushed control panels tie in with the retro/boutique aesthetic, the technology inside is bang up to date.

Although there are no thermionic valves in sight, a high-performance SHARC floating-point processor is claimed to have the gas to reproduce the interdependent non-linear circuit parameters that tubes and other components bring to the amplifier signal chain. Meanwhile, Blackstar’s proprietary TVP technology (aka True Valve Power, first introduced in 2013) simulates the way in which valve power stages interact with loudspeakers.

The Silverline Series includes a 100-watt head and matching 2×12 cabinet, but our review amplifiers bookend the combo offerings in the range. The Standard kicks out 20 watts from its 10-inch Celestion VT-Junior driver, while the Stereo Deluxe delivers a massive 100 watts from either side via a pair of 12-inch V-Types. Also available are the 50-watt 1×12 Special and the 100-watt 1×12 Deluxe.

The control panels here are broadly similar, although the Stereo Deluxe gets a middle control in addition to the Standard’s treble, bass and ISF. The Stereo Deluxe also benefits from physical resonance and presence controls in the master section and the larger amp’s stealth effects loop can be activated via Blackstar’s Insider software, which swaps the speaker-emulated output and MP3/line input for a preamp out and power-amp in.

In addition, Insider facilitates deep editing, preset organisation and patch sharing. You simply download the free software and connect any of the Silverline models to your computer via USB, which also enables direct recording and reamping functionality.

The grab-and-go nature of the Standard seems ideal for rehearsals and small gigs, so we jump in at the deep end. Up against a drummer using sticks in the potentially tricky environment of a small, rather dead-sounding room, the 20-watter has no trouble making itself heard and has clean headroom to spare, albeit in the context of a pretty laid-back Americana band. Still, it’s a very good start.

With preamp voices built on Blackstar’s own decade or so of sonic heritage and an array of simulated power amps from which to choose, there’s a tonne of tones on offer. If you’re looking for a classic Vox AC30-style sound, for example, it’s incredibly straightforward to dial in.

With the ‘clean bright’ voice and EL84 response selected, crank the treble, roll the ISF back to about 10 o’clock and, depending on where we set the level control, an array of Petty/Beatles/early Who tones are readily available. And don’t be shy with that treble – it really is the key to an authentic-sounding, valve-amp-like bite that occupies the right space in a band mix.

Don’t be fooled by the compact 1×10 cabinet, either – there’s a lot of bass on tap from this closed-back unit. At the opposite end of the musical spectrum to our Tele/EL84 duo, we plug in a Charvel seven-string, flip the response over to KT88 mode and the voice to ‘super crunch’ and the Standard copes remarkably well with the low B – only when we drop down a whole tone to A does it feel like we’re going to need a bigger boat.

Enter the Stereo Deluxe, then – and with mirrored settings, it’s clear that the sheer scale of sound has been conceived for much bigger physical spaces. Even without engaging the effects that exploit the amp’s stereo capabilities, the cabinet’s partial open-back construction helps kick out an expansive racket that belongs in large clubs, concert halls and at festivals.

Returning to our AC30-style sound from earlier on, the air being pushed by the Stereo Deluxe’s pair of 12-inch Celestions and large cabinet makes for an experience that’s much more visceral than with the Standard.

The additional physical controls offer an increased level of refinement, too, with the resonance and presence useful for tuning your favourite tones to the room on the fly. You also don’t need to push the treble as hard to get airy highs as you do with the Stereo Deluxe’s smaller sibling.

The onboard effects – a useful addition to the Standard’s toolkit – blast off into the stratosphere on the Stereo Deluxe. Be prepared to lose hours sat at the other end of the room listening to your guitar dance from one side of the Super Wide Stereo image to the other – the combination of long delay and reverb settings here is so musical and inspiring that it will surely be the jumping off point for a lot of music. Throw some of the onboard tremolo into the mix and your audience will be wondering where you’ve hidden your massive pedalboard full of boutique stompboxes.

Recreating valve tones using a mixture of digital and solid-state tech isn’t only about the sound, of course – feel is a real deal-breaker for many players. There definitely seems to be a greater immediacy from both amps here than we’ve experienced with Blackstar’s prior digital designs, which further adds to the impression that Silverline is a culmination of ideas rather than a stopping point on a journey.

2019 feels like the year in which digital amplifiers have grown up, with some of the industry’s biggest brands bringing products to market that ought to make even the most curmudgeonly vintage obsessives sit up and take notice. The Silverline Series is definitely on that list.