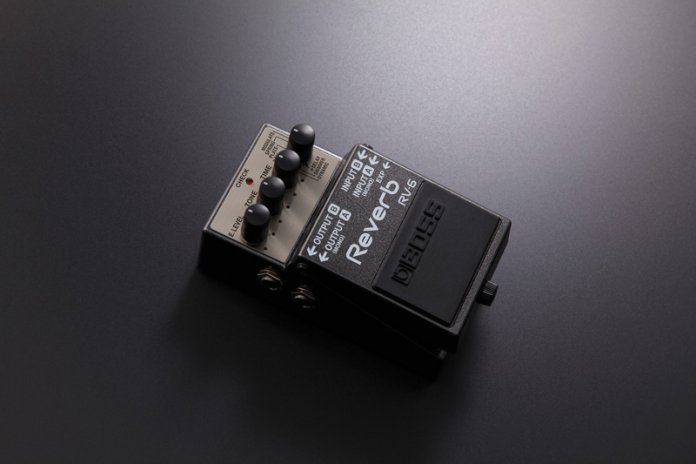 Not so long ago, reverb was basically an amp thing. Most likely, you’d have a delay of some kind on your pedalboard, but the only people enjoying authentic `church hall’ sounds were rackmount-flexing studio pros and vicars. For stompbox makers, it seemed, space really was the final frontier – and for a long time after Boss launched the RV-2 Digital Reverb pedal in 1987, there wasn’t an awful lot of competition.

But then came a revolution in DSP technology, making it far easier for the sonic boffins to put a convincing simulation of cavernous space into a box the size of a hamster’s garden shed. Of course, plenty of amps still come with onboard spring reverb, but many players would happily do without that extra bulk now that a compact stompbox can so easily fake it, and offer so much more besides.

Thus, handy little floor-dwelling ‘verbs are seemingly suddenly everywhere and a lot of them are pretty darned tasty, meaning that Boss’s new RV-6 is taking on a much stronger field than the original RV-2 ever had to contend with.

Boss has responded to the challenge by improving on the existing RV-5 with more powerful processing and an expanded palette. The RV-5 has six reverb types, which may have cut it a few years back, but starts to look a bit stingy now.

The RV-6 ups that count to eight, losing the gated effect and adding three new ones: dynamic, shimmer and +delay. Long-time Boss geeks will recall that the old RV-3 included delay, and some of them will surely be delighted to see its return.

There are three more differences that you may spot before you’ve plugged in the RV-6: the control panel has changed from white on black to a classy brushed metal look, the word `Digital’ has disappeared from the name and there’s a third input on the right-hand side. 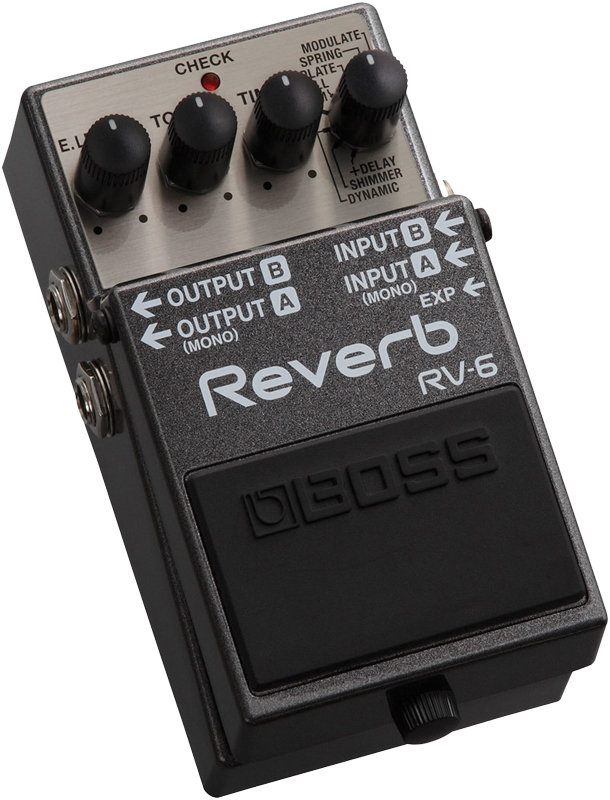 This is for an expression pedal to control the effect depth – the manual recommends parent company Roland’s EV-5 unit (RRP £55) and warns of scary consequences if you use anything else.

That leaves two guitar inputs, which can work with stereo sources, and also hide a clever little trick – the dry signal passes through the pedal from input A in unmolested analogue, but if you use input B instead, what comes out is a `wet only’ sound. It’s the twin outputs that promise to be the real secret weapon, though – hugeness sounds so much more compelling in stereo.

The RV-6 is built to the familiar Boss format, in a brick-like metal enclosure with the battery compartment nestling beneath the footswitch, and it’s easily accessed via the screw at the front. Mind you, it should be said that digital effects pedal such as this get through batteries like my Auntie Liz gets through cream cakes, and you’re better off with a nine-volt mains adaptor.

Before we get to the sound of the unit, we do need to mention a couple of design shortcomings. Firstly, the input/output arrows on the top of the pedal aren’t aligned with the output sockets. A more significant issue is the way the eight reverb modes are accessed via a tiny rotary control, which has the names so crammed around it that fiddliness is taken to a whole new level.

Both of these gripes are a direct result of the RV-6’s heritage – the classic Boss layout doesn’t really leave room for anything better, so until someone decides to think the unthinkable and make that monster footswitch a bit smaller, there isn’t really an easy solution to the issue.

We’ll work our way around the mode dial from the top, leaving the new additions until last, and that means starting with the modulated setting. This is the ‘verby equivalent of the chorus-treated delay repeats in an Electro-Harmonix Memory Man, adding just enough wobble to give a hint of added warmth and depth. 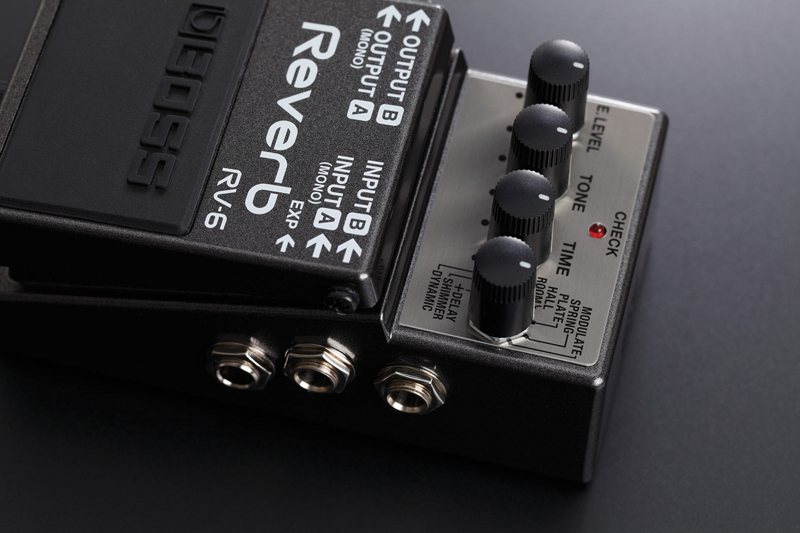 It is, in two words, ridiculously pretty. The modulation is rich yet subtle – there’s no throbbing or swamping of the dry notes, just an intangible lushness. It’s deeply addictive, especially in stereo. It would be nice to have control over the degree of modulation, but why tamper with perfection?

From this, we move to the relatively mundane spring setting and now we’ll need our hyper-critical ears on: it’s going up against the real spring reverb in a 50-year-old blackface Fender, and if there’s an audible difference, it’s failed. Well, it takes a bit of tweaking to match up the Boss to its vintage inspiration, most notably with the tone control, but once we get there it really is just about identical – and with virtually zero background hiss.

The plate, hall and room modes sound every bit as pure as they should, with the tone control again nicely judged to damp down the top end just as much as needed. In hall mode, there’s a full-size cathedral of ‘verb on offer when you max out the effect level and time. The pre-delay is totally natural and you can almost hear the congregation shuffling their hymn sheets.

And so we come to the three new modes. The dynamic reverb is another with modulation – slightly more of it, in fact – but its defining characteristic is the way it responds to your playing, much like Line 6’s `ducking’ effect: hit the strings hard and it will retreat into the background, then swell again when there’s space to be filled. Awesome stuff.

Shimmer is the RV-6’s most obviously digital voice. It’s essentially reverb with an added octave effect, but pull back on the tone and it becomes something less shrieky and more textural – it’s a specialised sound, but one which offers great creative potential. Finally, +delay creates an atmospheric blend of hall reverb and digital delay, with the tone knob now controlling delay feedback, and while there’s only minimal treble filtering on the repeats, it sounds – like just about everything in this amazing box – very nice indeed. 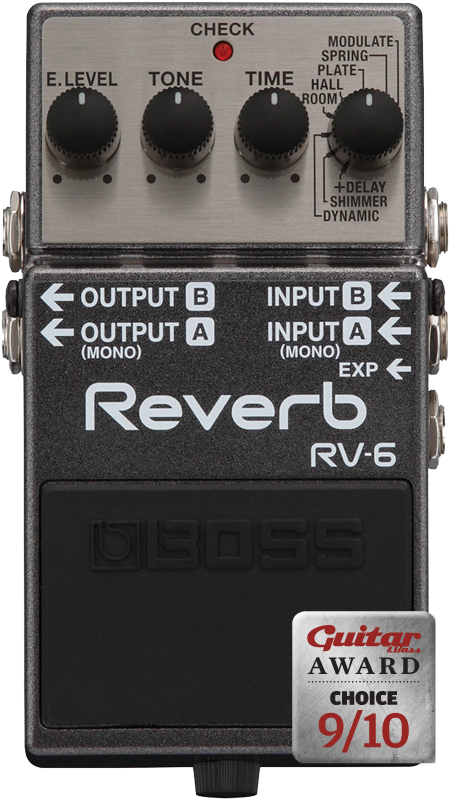 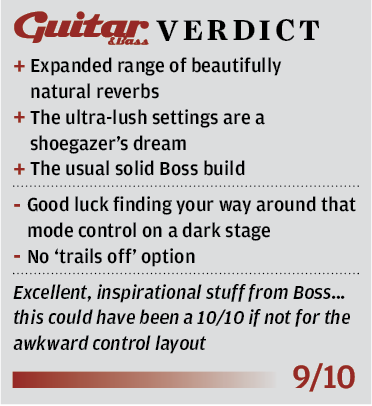