Waza Craft, the posh end of the Boss stompbox line, takes on two of the best-known overdrives in the world. 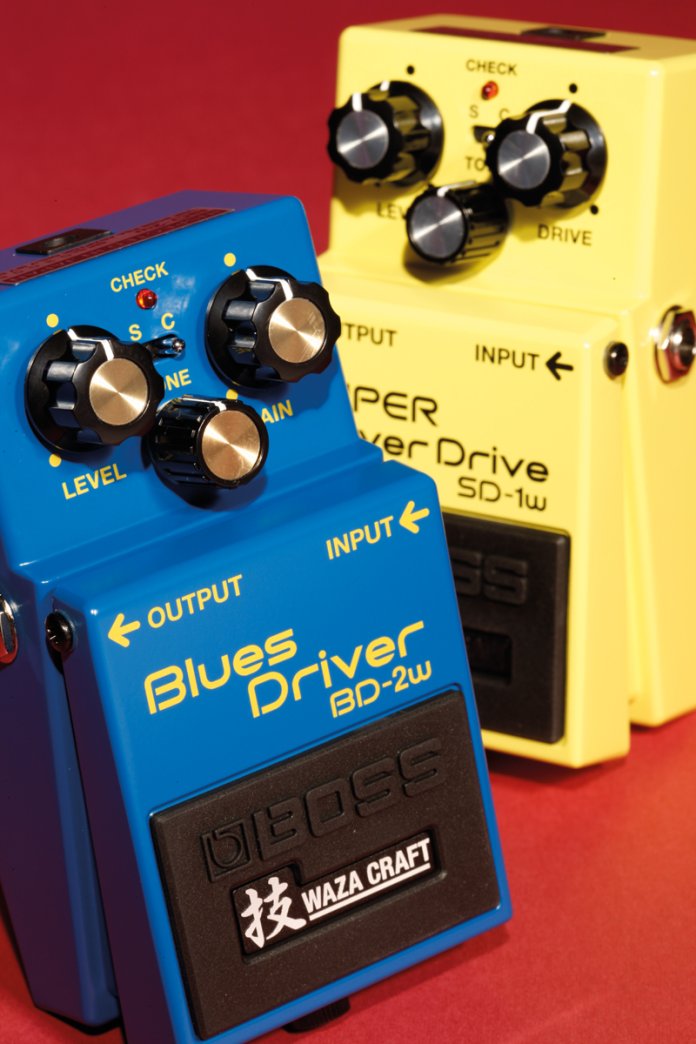 There was once a thing called the 1980s, and some of us learned to play the guitar in this mystical, near-forgotten kingdom. We stumbled along the stony road to competence with very badly made guitars and terrible solid-state amps… and as for pedals? Well, we dreamed of Boss but generally had to make do with flimsy imitations. It was a nice place in some ways but, dear God, please don’t make us go back there.

There aren’t many things that are still as they were in the ’80s. So how about Boss? The stompboxes certainly look exactly the same as they did back then, and they seem to be every bit as popular among guitarists of all kinds, but they’re occupying a slightly different slot in the marketplace.

When you can easily pay £200 or more for a boutique overdrive, today’s RRP of £45 for the trusty old SD-1 Super Overdrive seems like a street urchin’s loose change. Not bad considering three decades of inflation – and the fact that, at least since manufacturing moved from Japan to Taiwan some time around 1990, nobody seems to have complained much about any perceived drop in quality.

There has been some fresh thinking at Boss HQ, however – and these Waza Craft units are two of the latest products to come out of it. Yes, they do look very much like just another SD-1 and a BD-2 Blues Driver; but there are a couple of clues on the front of each pedal, and one more right at the top of this page. £135 is precisely three times the RRP of a standard SD-1, and almost twice that of a non-Waza BD-2 (£75). So what makes them so special, apart from a ‘W’ in the name and a bit of Japanese script on the black stompy area?

The answer to that question lies in the pedals’ innards, which, we’re told have been revised for ‘premium sound’ using 100 per cent discrete circuitry rather than op amps – that is, separate components instead of IC chips.

Now, there’s nothing wrong with chips, as long as they’re part of a balanced diet, and in fact some of them are highly prized by tonehounds: the JRC4558, for example, is often cited as a crucial ingredient of the classic Ibanez Tube Screamer sound… and there’s a version of it at the heart of the SD-1. But Boss has decided there’s no place for such shortcuts in the Waza Craft range.

The other difference is the little slider switch squeezed into the middle of each unit’s control panel: the initials stand for Standard and Custom. Standard is essentially a refined version of the original pedal’s sound, while Custom promises something new. But don’t get too excited, because we’ve been warned not to expect two pedals in one here – just a slightly different flavour with more fullness and sustain. 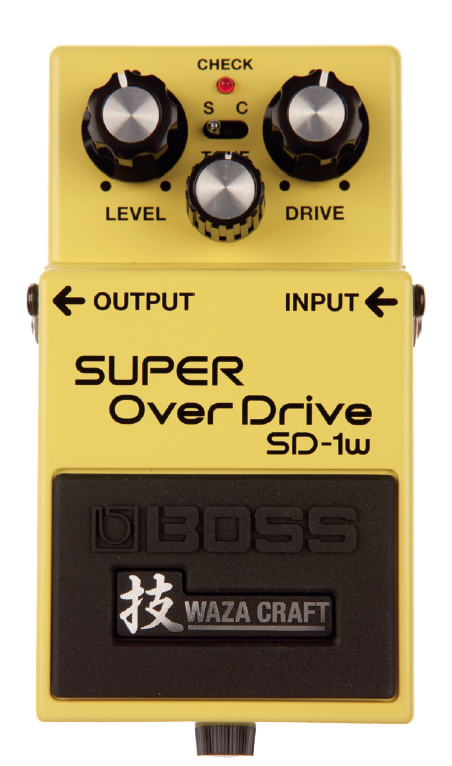 Let’s start with the basics that you’d expect from any Boss compact pedal, Waza or no Waza: it’s a sturdy little metal box with a grippy rubber base, metal in/out sockets and a 9V adapter input at the top end. The knobs sit safely below the level of the giant footswitch, which doubles as a battery cover thanks to a screw at the front that’s easily ‘unlocked’ with a gentle squeeze on the spring-loaded switch. It’s a very clever piece of design – no wonder it hasn’t changed in over three decades.

It does have one limitation, though. Because that switch takes up almost two thirds of the surface of the unit, there’s not an awful lot of room left for the controls. It isn’t a problem with just Level and Drive plus the slightly skinnier Tone dial, but there’s only a half-inch gap for the Waza version’s new Standard/Custom mode switch.

It’s too tight – you cannot access it without touching the other controls, unless you have tweezers for fingers. Surely side-mounting it would have made more sense. Still, there is plenty of resistance in all the knobs so you’re unlikely to mangle your settings by accident.
Now wouldn’t it be handy if we could pull out a standard SD-1 for comparison at this point? Alas, my pedal cupboard says no… but it turns out there are advantages to being married after all, because ’er indoors has one: a somewhat scuffed and dusty but still fully operational ’90s sample.

The two really are close to identical on the outside, but the differences are more apparent once the baseplates (and the protective sheets of clear plastic behind them) have been removed. The SD-1W’s main board has a more angular layout, with smaller components, and ribbon cable strips have replaced much of the spaghetti-like wiring of the basic unit. More importantly, a search for the telltale squat black rectangle confirms that the Waza circuit is indeed chip-free.

Sounds
Like the Tube Screamer, the Boss SD-1 is not renowned for luscious bottom end. It’s a mids-focused overdrive, designed to cut through a mix and leave the lower frequencies to the bassist. The SD-1W is no different: engage the pedal with Drive low and the other two controls at noon, and chords are noticeably thinned out. It’s a pretty traditional rock sound, throaty but not too harsh.

Side by side with the standard SD-1, it feels just a little more full and pure, with less wiriness in the high notes. It’s an improvement, but not a dramatic one. The gain range is moderate – you can crank Drive to full without being dragged into psycho country – but it’s aggressive enough for screaming solos and menacing power chords.

So now we poke a delicate pinkie into that tiny gap and switch to Custom mode. Yes, it’s clearly the same pedal, but the overdrive is now distinctly smoother, with more body and sustain. There’s still a midrange hump and a drop in the bottom end, but it’s less pronounced – and the more you push the Drive, the more obvious the difference becomes.

In short, this is the DS-1 grown up. It seems that, after years of seeing other companies clogging up the internet with mods and DIY kits to make pedals like the DS-1 sound less scratchy, Boss has decided to stop sulking and join the game. 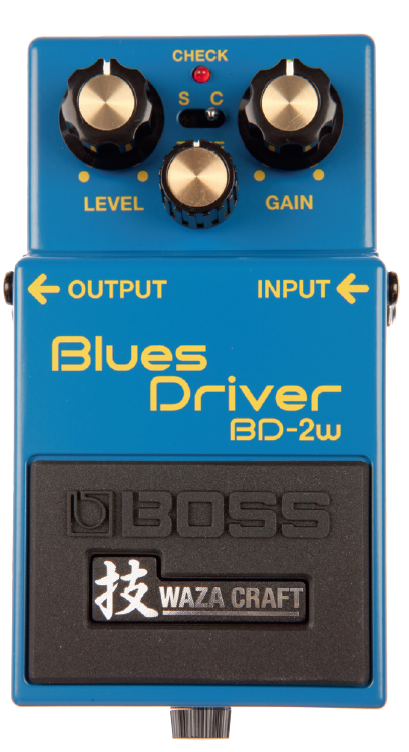 The Blues Driver is a drive pedal for blues. Incisive, eh? Of course, it doesn’t have to be limited to blues: it’s for anyone who wants tasteful levels of gain without the thinning effect of a Super Overdrive. Our Waza Craft version is exactly like the SD-1W, with the same Standard/Custom switch in the same little gap, but Drive is now called Gain.

Sounds
This time there’s no drop in bass, and the overdrive is smoother all round. Any blues-minded stompbox should sound nice at low gain settings, acting as a booster for an amp that’s waiting to be pushed into overdrive, and the BD-2W handles that task like a pelican handles fishing. It still sounds surprisingly amp-like when you let the pedal do all the work, and there’s no loss of fatness with the dirty stuff cranked. 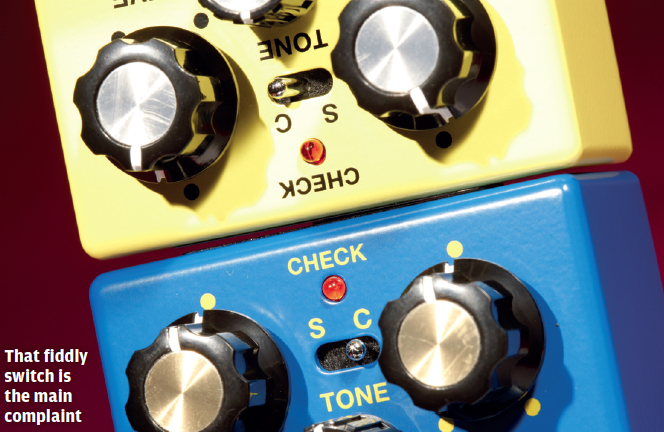 Some players find the BD-2 too spiky, and this problem has not been entirely cured by the new circuit – if you’re using single-coil pickups and a bright USA amp, you might struggle – but it can be controlled to an extent with the Tone knob. Turn it down to 10 o’clock and a Les Paul will retain its clicky attack but not at the expense of needles jabbing at your eardrums with every pluck.

Engaging the Custom mode has the same effect as it does on the yellow pedal: more warmth, more silkiness. It’s enough of a difference that you’ll be glad it’s there, but it doesn’t completely undermine the Standard setting – in some situations you’re likely to prefer the lighter, more open-toned option, so it is a real bonus to have both.

Verdict
These are pedals for Boss lovers – if you’re not a fan of the non-Waza versions, they’re unlikely to convert you. But they’re interesting new takes on familiar voices, adding just enough boutique-style sophistication to make the three-figure price tags realistic. And, of course, like all of Boss’s classic compact stompers, they’re simple to use and solidly built, with a footswitch that you just can’t miss. 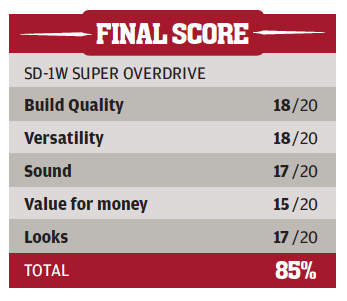 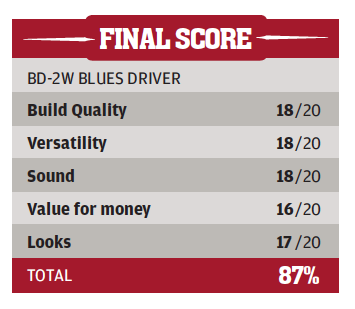