Nothing brightens up our day like a quirky British-designed guitar, and the Burns Steer reissue combines tradition with weirdness in a unique way. Marcus Leadley takes the bullock by the horns 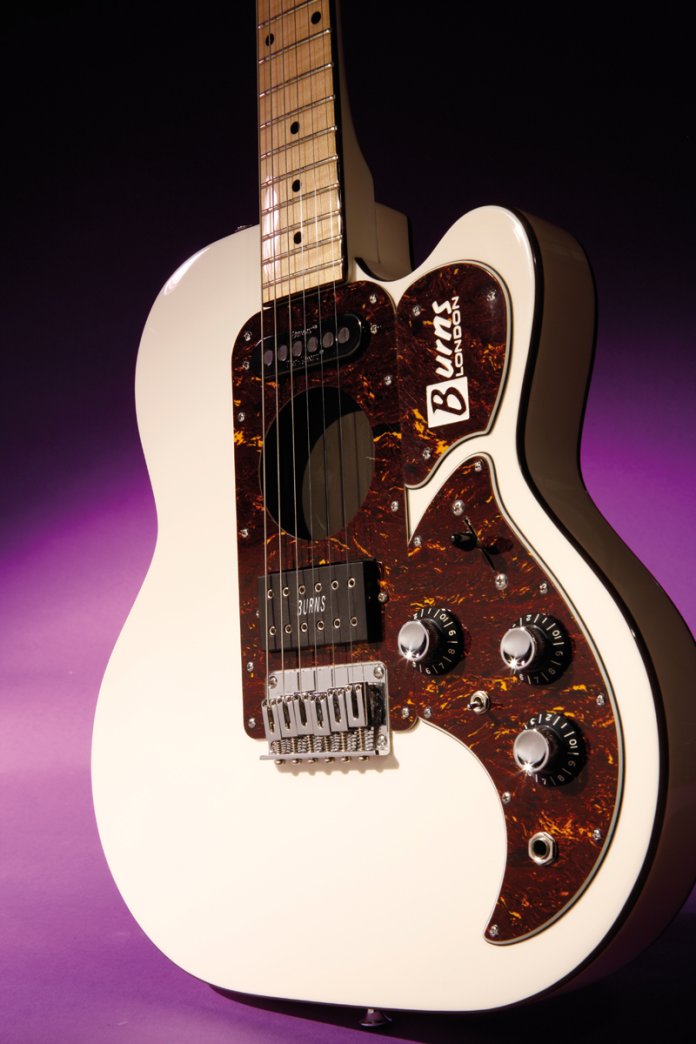 Jim Burns designed a lot of guitars during his long and illustrious career. The original Steer dates from the early 1980s; legend has it that only 40 were produced, and one of these subsequently became Billy Bragg’s favourite instrument. Later, when the Steer was reissued in the late 1990s, its unusual looks and tonal flexibility attracted players like Phil Solem of the Rembrandts and Earl Slick.

There are a few differences between the original model, the first reissues, and the new version we have on the test. While the build and electrics have remained fundamentally the same throughout (’80s models had a smaller Burns single coil pickup, not a Tri-Sonic, in the neck position), the bridge was initially an integral part of a large metal plate that also held the pickups – a format that loosely echoed the design of the Fender Telecaster. There was also a metal front-plate for the headstock, and the instrument only existed in a non-cutaway form.

Since the 1990s, Steer bridges have been separate units attached directly to the guitar’s body. A cutaway version was also introduced, and this has become by far the best-selling model. While the basic specification remains the same today as for the Korean-built guitars of the early 2000s, today’s Steer is manufactured in China – and, Burns says, to a higher standard. Final assembly and set up is carried out at Burns London’s UK workshop. The guitars also feature improved, handwound pickups.

There’s nothing ‘me too’ about a Steer. The simplistic ‘Spanish guitar’ body shape conceals a routed and chambered interior that remains innovative to this day. It isn’t exactly a semi-acoustic, and nor is it simply a chambered solidbody, as the acoustic-like soundhole vents the chamber – and it is most certainly not an electro-acoustic. The neck has a uniquely British feel and the high-gloss finish over a maple fretboard with an edge binding to hide the fret tangs reminds me of a vintage Shergold, but without the zero fret.

The feel is bright, twangy and very fast and the 25.5″ scale length gives the Steer a Fenderesque tension. However, with only 20 frets, top-end widdlers may not be best pleased. The headstock design tops off the guitar’s maverick look, but it totally fits in the Burns catalogue where obscure shapes have always been the preference. Note the four string trees, which are designed to increase tension over the nut. Add the separated, three-piece tortoiseshell scratchplate and the chunky amp-style control knobs and there is no doubt of the Steer’s Burns heritage. 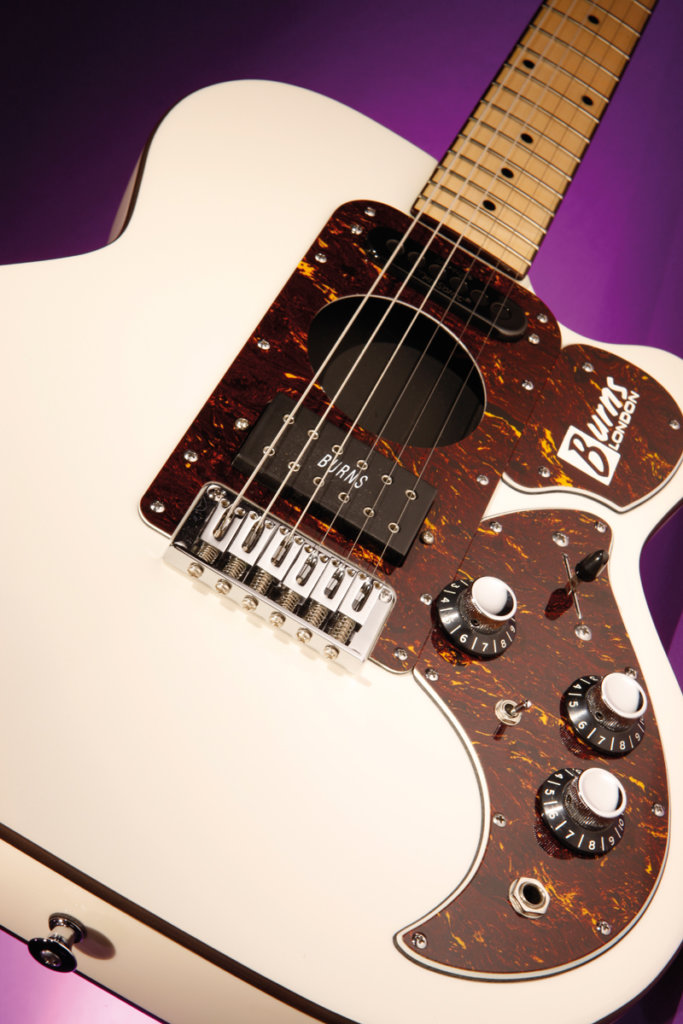 Hollowed body keeps the weight to less than 8lbs

The bridge humbucker and the neck single coil are both mounted directly into the scratchplate and hang in the cavity below. There is a two-way mini toggle that acts as a coil tap for the bridge pickup. The neck unit is a vintage-style Tri-Sonic, another unique Burns design, featuring a loose-wound coil of wire and a pair of ceramic magnets. They are highly valued for their rich harmonic character and have always been Brian May’s weapon of choice for creating killer rock lead voices, but they can also be angular and cutting when used in the context of choppy rhythm playing.

One thing that becomes clear is that the Steer seems best when approached as an instrument with single-coil pickups. Then, flicking the bridge pickup to humbucking mode works like a booster for solos and lead playing. This is an extremely effective way of creating over-the-top sounds for those moments when you really want to rock out.
While the humbucker works effectively for clean voices and combines well with the Tri-Sonic for a range of chord voices, the edgier brightness of the coil-tapped sound has more clean presence, creating snappy country and blues riffs and plenty of jangle for classic pop. As a tool for overdriven sounds the coil tap is very it’s very Strattish: even, chiming and bright, so it will cut through the muddiest live mix. 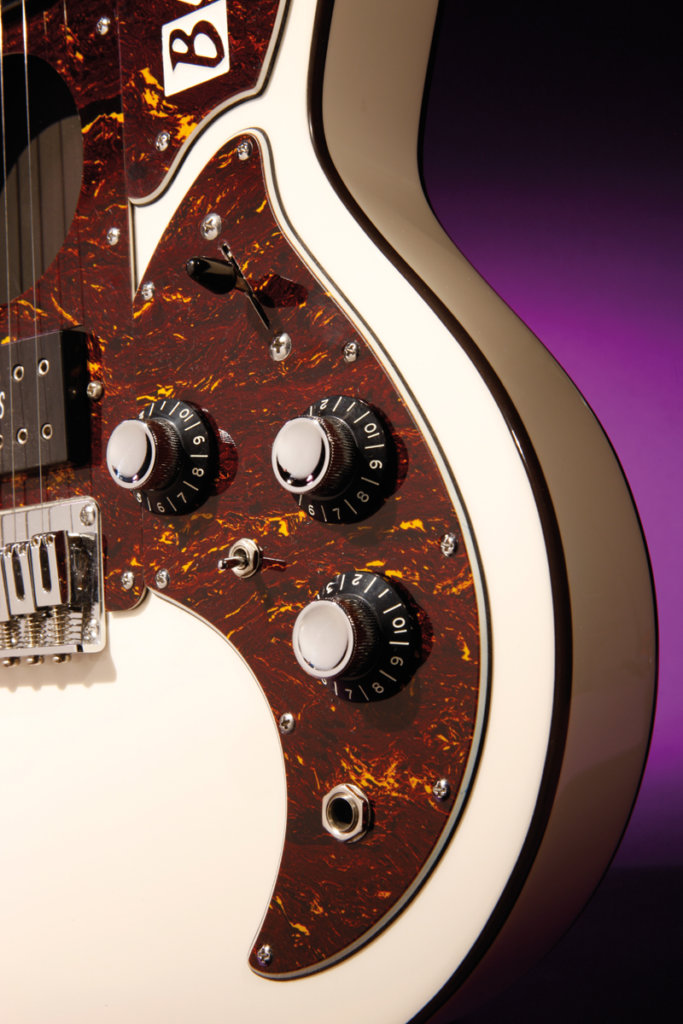 Switching to humbucker mode brings on some rich crunch for power chords, and classic hard rock riffs feel right at home. Switching between the bridge pickup in humbucker mode and the Tri-Sonic is more difficult as there is a noticeable difference in output, so if you start with the humbucker sound it’s hard to go anywhere other than to quieter parts without resorting to a boost pedal or an overdrive.

On its own, the neck Tri-Sonic is brilliant for clean chord strumming behind vocals and there’s an underlying warmth that’s very pleasing. Push the amp a little harder and the break-up tone has an angry, forward bite that’s positively exciting. Pushing the gain hard brings on a classic ’70’ style singing lead tone with excellent sustain. Pulling things back a little but keeping the volume quite high creates an almost Gretsch-like vibe. 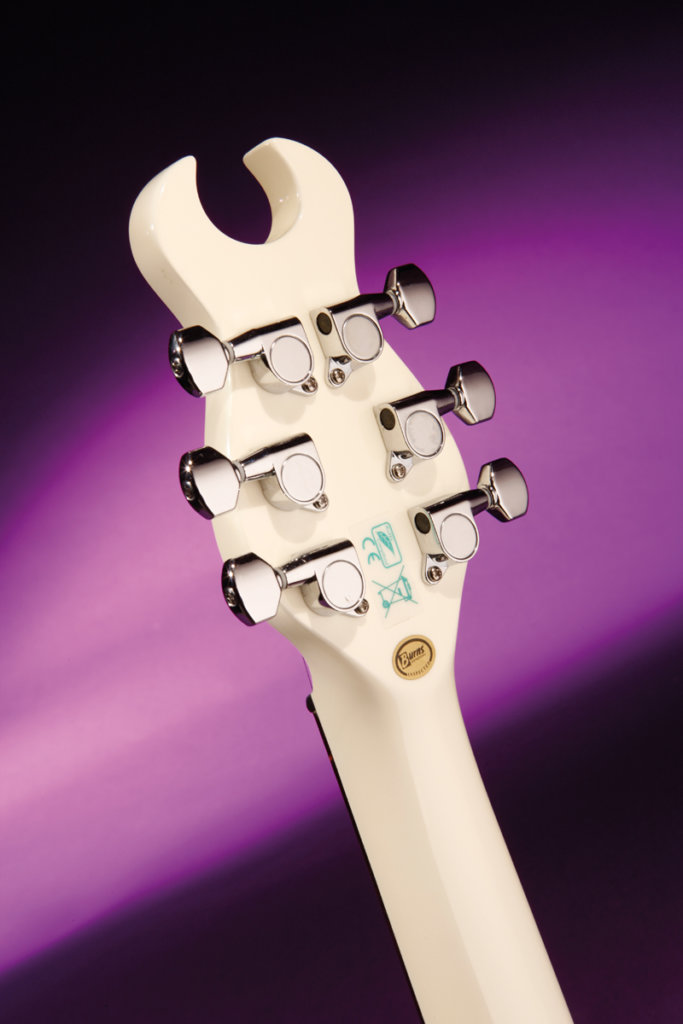 If you pinned me down and demanded a comparison between the Burns Steer and another instrument, the closest one I could give would be a maple neck Fender Telecaster Deluxe with a coil tap mod. However, the Steer is far more than this. While the looks won’t appeal to everyone, it’s an immensely fun instrument to play and the range of different sounds that can be created is quite awesome.

The neck is a real peach to play and again, offers something a little different. One of the nice things about contemporary Burns guitars is that they come with a lot of extras – so you get a really solid fitted case (in silver snakeskin tolex, no less), a strap, cleaning cloth, manual and tools…all indicative of an overall commitment to value and detail. In an era where all too many more expensive guitars simply arrive in cardboard boxes, it’s an attitude some other manufacturers might do well to adopt. 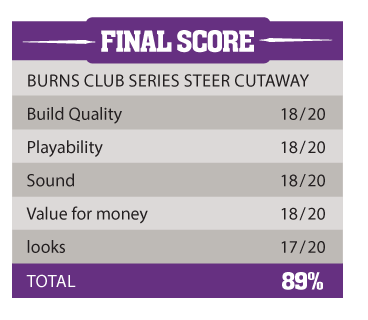