If you’re looking for light weight and impeccable ’60s credibility then the weeny but addictive Nu-Sonic might be for you. Review by Gareth Morgan 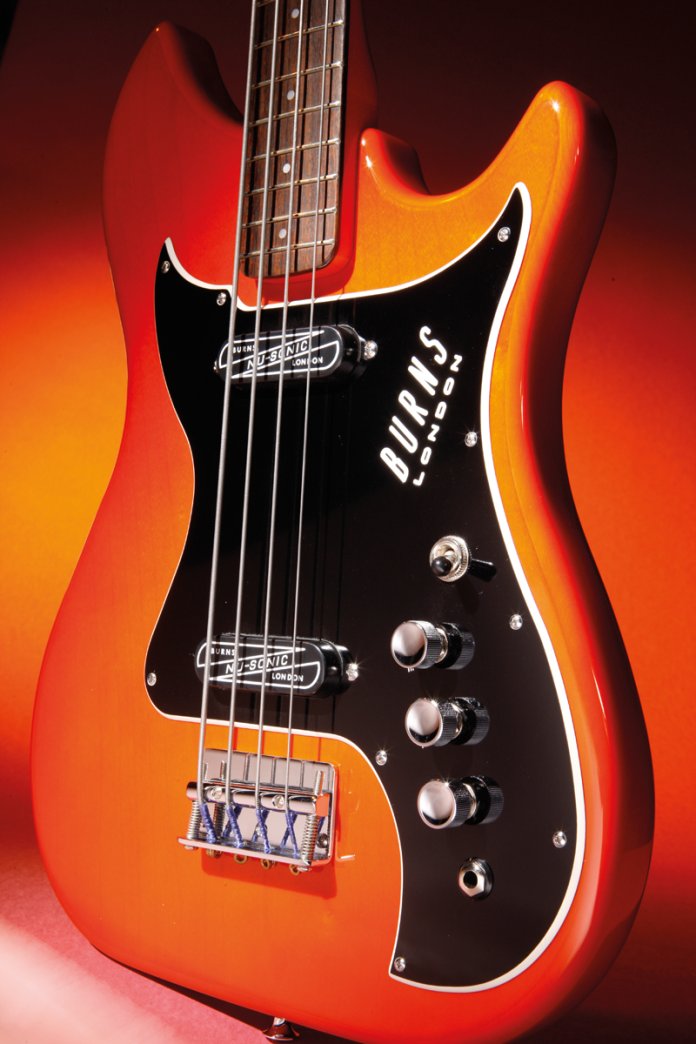 With short-scale basses like the Epiphone EB-0 and assorted Fender/Squier Mustangs, Broncos and Jaguar Specials currently so popular, it seems only right and fair that the designs of the late Jim Burns – so often dubbed ‘the British Leo Fender’ – should get a piece of the action.

This month, we’re looking at the new, or quite possibly nu, Nu-Sonic… an instrument not as famous in British rock history as the Marvin or Bison versions, true, but a bass with a certain charm all of its own. 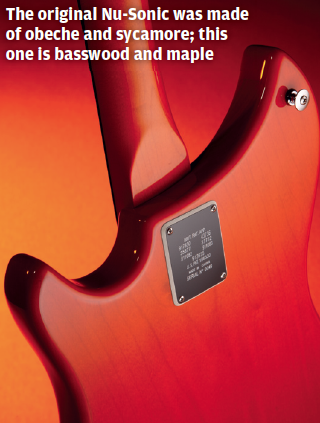 In 1965 he sold the operation to the Baldwin Piano and Organ Company of Cincinnati for $380,000 and company fortunes fluctuated through the ’70s and ’80s until 1992, when Barry Gibson restarted the brand, employing Jim as a consultant. Since then, Burns has provided us with eye-catching reissues and developments of instruments plucked from a period of intense creativity for British guitar builders. 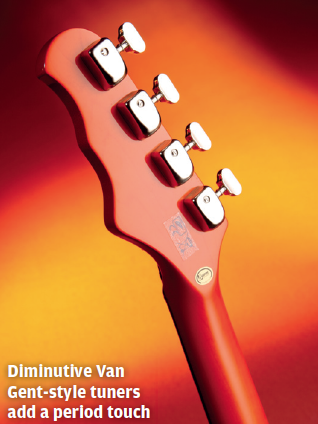 ‘Nu-Sonic’ was originally the name of a short-lived guitar from 1964, a budget model which replaced the earlier Sonic of 1960, with a bass version in limited numbers appearing a little later. Today’s Nu-Sonic bass is an almost exact replica of its forebear, save for an additional wavy detail on the lower edge of the headstock, often described as a batwing.

The body, however, is exactly like that of an original Nu-Sonic bass that Barry Gibson acquired in the late ’80s, a reproduction of the guitar design in slightly enlarged form.
The compact dimensions and the cheerful red finish give it a toy-like appearance, and the 30″/760mm scale will be just the ticket for new converts to the instrument, bass-doubling guitarists, or those in search of that ’60s feel.

The Nu-Sonic is made in China and has a basswood body with a maple veneer to show some quality grain pattern through the transparent finish.

A double-cutaway design, it has a chunky shark-fin upper horn and a flat section just behind the bridge, and there’s no belly or forearm chamfering, just neat and tidy heavily-bevelled edges all round. We love the scratchplate, a stylish and expansive three-ply black/white/black traffolyte affair, and in classic Burns fashion the four-bolt neck plate is designed to match the scratchplate, with the model information neatly etched into it. 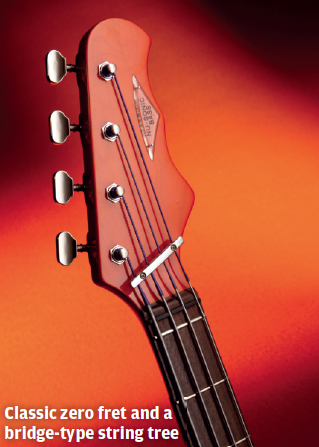 The bridge is unusual, scorning the adjustability we take for granted these days with a single – yes, single – chromed steel saddle, tweakable for overall height and back-and-forth intonation, but no more. This isn’t about modern-day cost-saving… it’s actually the same as the super-simple unit on the original, but minus the cover.

As far as electronics go, the Nu-Sonic is passive and kitted out with a pair of single-coil pickups with black plastic covers and cool white stencilling. It comes with three knobs – individual pickup volumes and a master tone – plus a three-way pickup toggle switch. 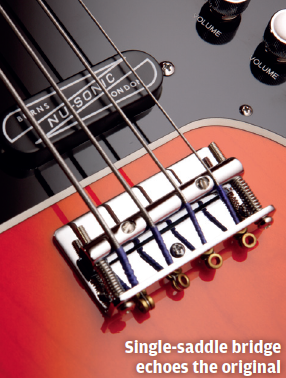 The neck is maple and finished in red to match the body, and the shorter scale length and pleasingly slim profile make it a very enjoyable playing experience. At the top the headstock is nicely recessed to give the strings a healthy break-angle as they cross the black composite nut, and the four Burns closed-gear tuners are copies of the original Van Gent units.

They’re just about the smallest machineheads we’ve ever seen fitted on a solidbody bass, so small that they actually fill you with a weird trepidation about using them; it’s a worry that proves completely unfounded, as they function exactly as they should.

A zero fret stands as the gateway to the rosewood fingerboard, and the official fret count is 21, these being joined by white pearloid dots with three lining up at the octave, plus speck-sized versions along the top edge. You’ll also notice the factory strings are flatwounds, and considering the Nu-Sonic’s nostalgic inclination, that’s a move we heartily approve of.

Sounds
Before we get down to business we must note a certain quirkiness when it comes to the controls. While clicking the toggle up or down solos the individual pickups as usual, and though in these positions the volume knobs work as expected, in twin-pickup mode muting either pickup via its volume control cuts the overall output. This seems a bit weird but the upshot is actually positive, as various combination levels produce variations of similar quality to those attained by tweaking the tone control.

That said, the twin-pickup sound is agreeable, with the flatwound strings producing a pleasing combination of throaty growl and soft thud. There’s plenty of throaty low-mids in the sound, with decent clarity hand-in-hand with a slight nasal edge as you move across the fingerboard. 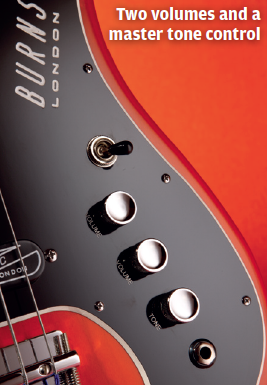 The G string has plenty of body with a slightly honky edge, and if this is a little more lively than you’d expect, you’ll get good results when you reach for the tone control. For a passive roll-off system it really does offer a quite eyebrow-raising level of variation – more than any other passive bass we’ve ever come across.

At about three quarters-cut you’ll unearth a wonderful warm, sweet, thuddy sound, a springy, pseudo-upright tone that’ll have you jumping from walking bass to melodic hip-hop grooves in no time.

The bridge pickup unleashes a tight, barking noise with a gurgly edge, surprisingly modern and almost Warwick Thumb-like in quality, and again the tone knob locates a nice, softer edge.

The neck pickup is rich and earthy with a dark, punchy midrange that suggests its upright forebear and clean highs that sing through, rather than carving their way. A top spot for bluesy rock, this sound gets more rootsy as you roll off the tone, with a throbby dub sound at three-quarters cut.

Verdict
While it’s not likely to be the only bass in your arsenal, there are plenty of reasons to own a Nu-Sonic. The shorter scale length will appeal to smaller folk, beginners or occasional bass-playing guitarists, and the tone has more to offer than the merely old-fashioned.
Yes, it feels a little toy-like, but the Nu-Sonic has real individuality, the kind of character which reflects the sense of adventure felt by instrument designers such as James Burns in the UK at the time. It’s decent value for money, and it’s massive fun to play. 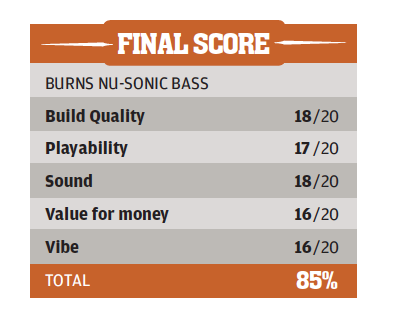