With evocative styling, a lush spring reverb, a mighty clever power attenuator and the ability to swerve from righteous tweediness to chiming sparkle, the Skylark may be Carr’s best yet. 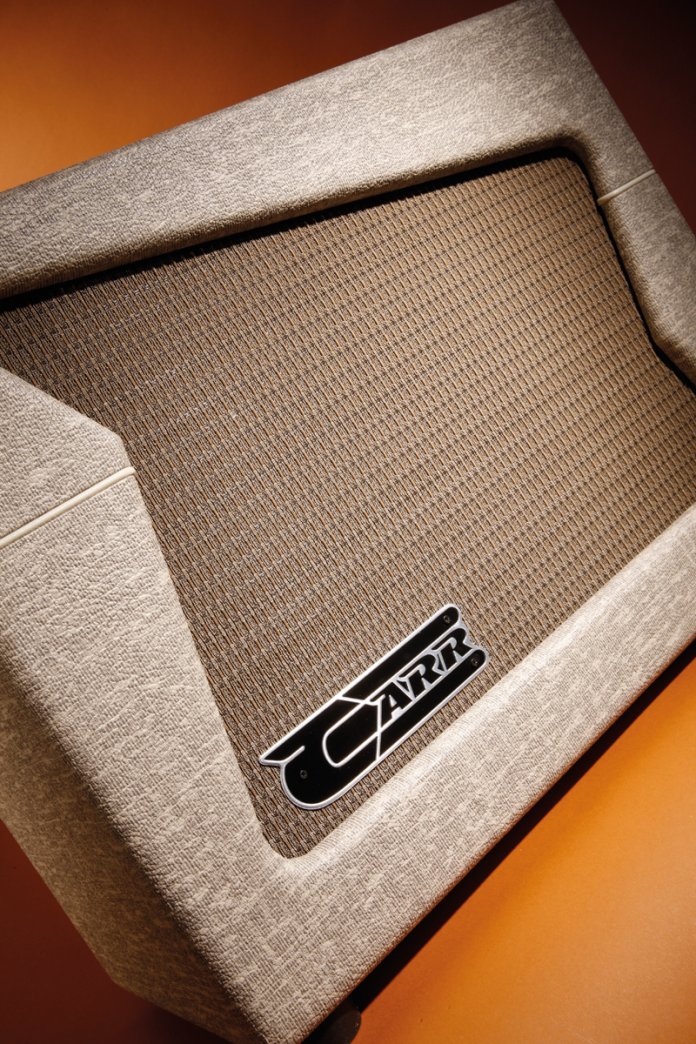 The dual 6V6 Fender Harvard of the 1950s provided the inspiration for the new Carr Skylark. This model may be less familiar to readers than the Champ and 5E3 Deluxe that flanked the Harvard in Fender’s late-’50s catalogue, but you will have heard Steve Cropper playing one on all those classic Stax recordings.

In fact Carr could easily have kept quiet about the Fender Harvard inspiration because the Skylark has so many extras that it surely qualifies as an original design. Interestingly, the company has chosen to combine fixed and cathode biasing to balance the thickness and dimension of the former with the firmness, clarity and punch of the latter. A single input with a Hi/Lo gain switch is followed by a full complement of EQ controls that include Treble, Middle and Bass. Whether you consider Presence as equalisation or feedback adjustment is up to you, but the Skylark has one of those too. 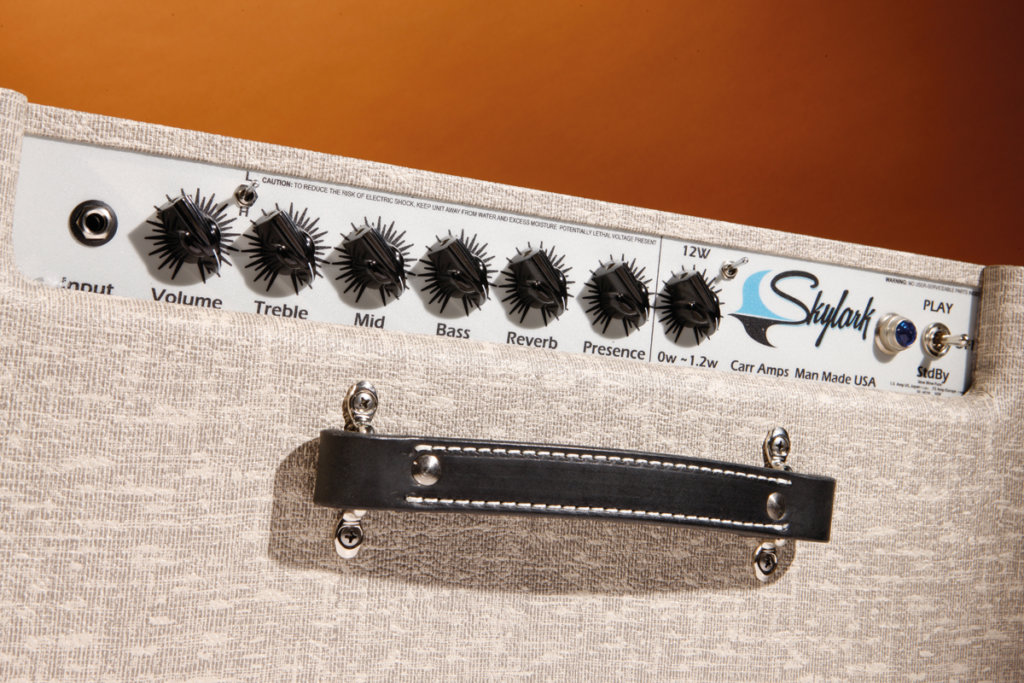 Then there’s the onboard spring reverb with all-valve circuitry and a proper 17″ spring tank, plus a built-in switchable attenuator that goes from 1.2W to 0W. Dropping down that far may seem drastic, but it will make perfect sense to anybody who has ever bought a 4W Fender Champ in the mistaken belief that they will get low-volume overdrive. In reality 4W is pretty loud, but 1.2W is just loud enough to be fun without annoying your neighbours.

Other features include a bespoke saddle-leather handle that looks seriously over-built. Carr has also chosen to eschew the Harvard-spec 10″ speaker (plus Carr’s usual Eminence ) for a 12″ Celestion A-type. The A-type is Celestion’s spin on classic US guitar speakers with a ceramic magnet and a respectable 98dB efficiency rating.

Sounds
From the outset it’s obvious that the Skylark spans the tonal time zones with ease, and Carr has achieved this by tweaking the controls to provide Skylark owners with the tools to swing the sound towards raw ’50s tweed or cleaner ’60s blackface as mood or circumstances dictate.

The Bass and Treble controls seem to have more range than usual, but Middle is the real star because it goes from serious scoop to a substantial boost with an accompanying increase in gain. Presence can be used to add top end, but it works by adjusting negative feedback. When you turn up Presence you are actually reducing the negative feedback, which results in extra high-frequency sheen and overdrive.

So how does all this work in practice? For a tweedy tone you should crank up the Middle and Presence controls – and don’t be shy about using the maximum settings. At this point the Skylark may sound a bit too bright, so consider the Treble control as a kind of a high-frequency roll-off. You may find that you’ll end up with it almost completely flat, then you can simply dial in the Bass to taste along with the Volume. 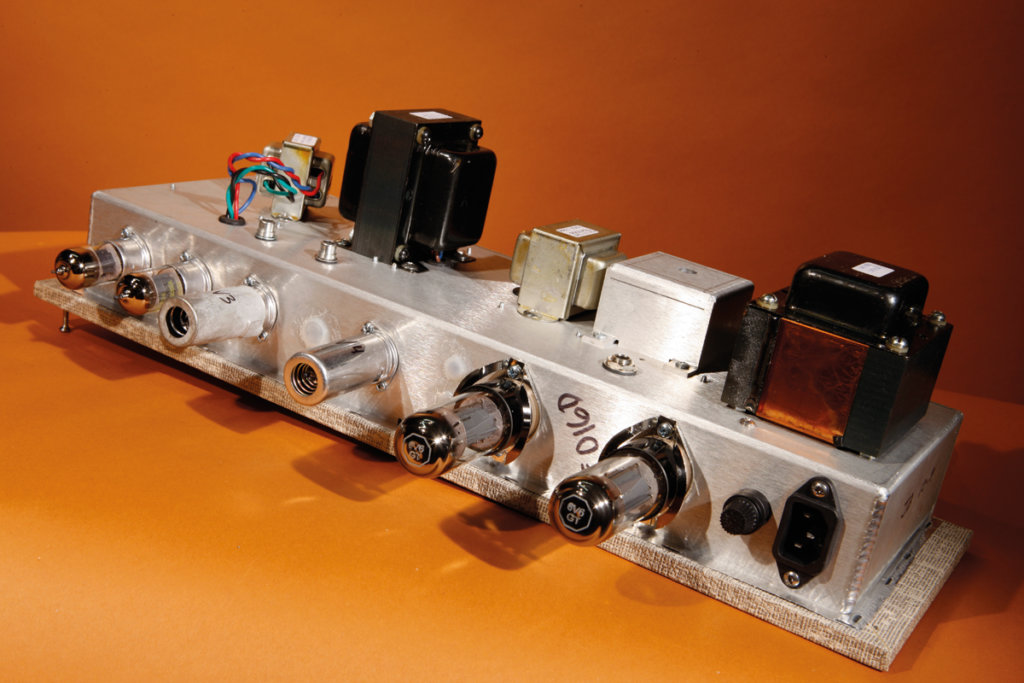 The Skylark delivers thick, juicy overdrive, joyous harmonic overtones and ample sustain for soloing. The bottom end may be slightly loose and spongy, but the chewy valve grind combined with the sparkling trebles will make you feel like a youthful Billy Gibbons on a good day.

The problem with tweed replicas is that they tend to just do one thing really well. With the Skylark you can roll the Middle and Presence back, set the Bass and Treble anywhere around halfway, dial in a bit of reverb, and you’ll have clean tones to die for. It can be pure country, Stax soul or sweet and bluesy; you can still get overdrive with these settings, especially in High Input mode, but it’s a glassier, chimier affair without the midrange bark and grind.

So that’s how you move from ’50s to ’60s, but you can also get to all points in between. After a while you’ll discover how you can tighten tweedy lows by reducing Presence and compensating with a touch more Treble and Volume… or you can fatten and loosen up a blackface tone by doing the contrary.

The Reverb control provides a gradual increase rather than the too little/too much transition that is all too often the case. It’s just as well, because this reverb unit really does sound delicious. It’s eerily three-dimensional, and can go from just a hint of ambience to dripping off the walls.

Carr’s attenuator employs high-quality Solen aerospace capacitors and a real speaker voice coil rather than power scaling or a resistive network. The attenuator control is continuous rather than stepped so as not to adversely affect the Skylark’s tone, and it’s comfortably the best built-in attenuator we have encountered. The lowest position silences the Skylark and you can easily set it to the point where the amp level is more or less equal to the acoustic sound of a solidbody.

We were able to use the attenuator to jam along with backing tracks playing through the speakers of a laptop with no difficulty, and at 1.2W it’s loud enough to overpower an acoustic guitar and most singers.

Verdict
True, very loud cleans aren’t on the menu – this is a 12W amp, so that’s hardly surprising – but an extra 3W or so might have been nice, as would an alnico speaker option. Even so, the Skylark is pretty much perfect as a home, studio and small gig amplifier for fans of classic American tone. It’s our favourite Carr model so far. 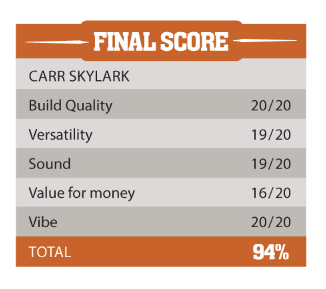