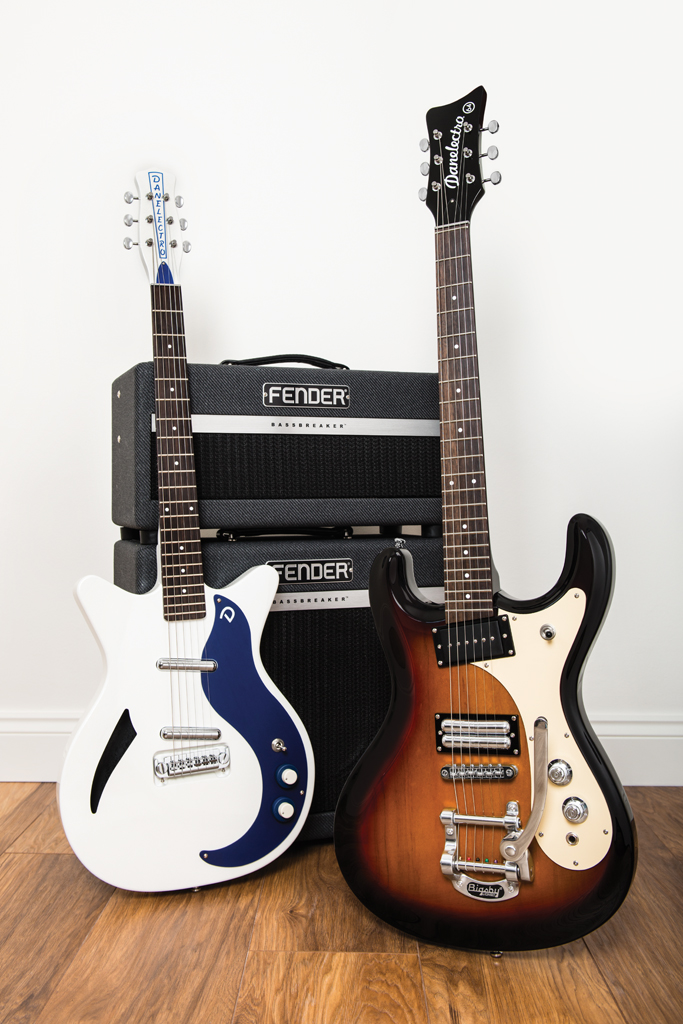 As well as its legacy as a classic guitar brand of the 1950s and 60s, Danelectro’s contemporary incarnation has amassed its own very interesting history. There was a time in the early 2000s when it seemed as if not a week went by without a budget Dano release.

And when the roster became too unwieldy, the company pulled the plug on guitar making (with the exception of the classic ’59 Double Cut) and concentrated on its pedal catalogue. Some years on, we have a respectably varied, nicely contained selection of instruments. These two new models push the price point a little and introduce some extra options at the higher end of production. 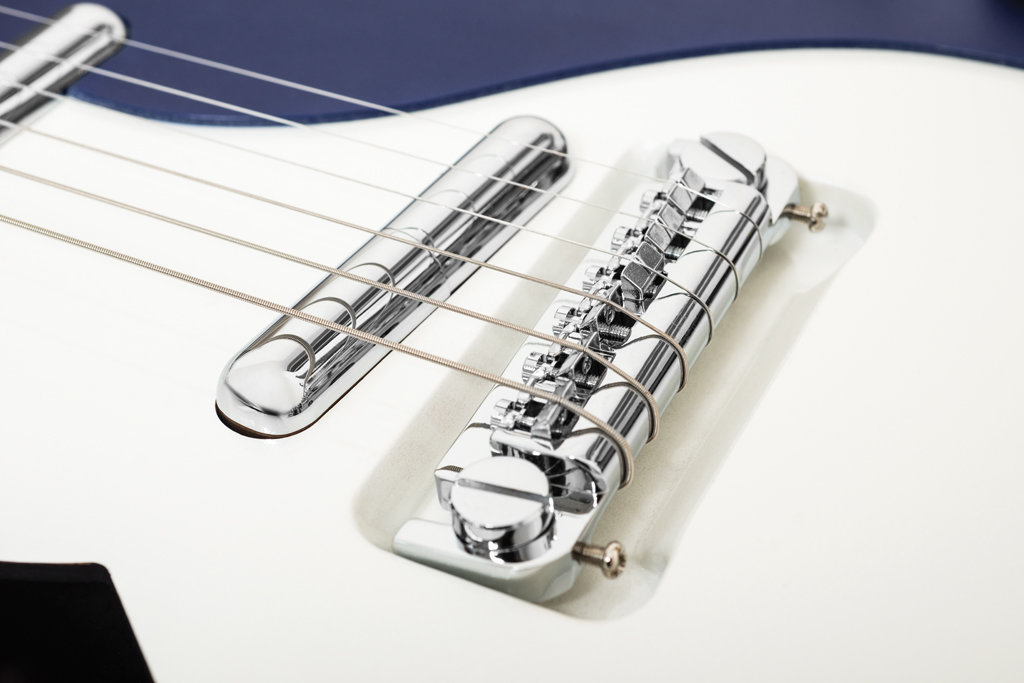 The classic Dano body is still constructed using Masonite (a type of hardboard) over a pine frame; it’s part of the Dano magic, and it remains the form for the standard double cutaway. This new ’59, however, has a spruce top and rims and – unlike most previous ’59s – the body cavity is vented with a single f-hole; it’s actually more of a Rickenbacker-style slash.

It looks stunning in Vintage White with a blue scratchplate. In other respects, the ’59M retains all the elements that make it a ’59. The company abandoned the single-piece wooden bridge saddle for this model in favour of an intonatable metal bridge long ago, and the Spruce features a chunky and reliable wraparound unit.

This is, however, recessed into the top to give better control over string-height adjustment. The bolt-on neck itself is a peach: the slim C profile fits nicely in the hand. The 21-fret rosewood fingerboard feels fast and smooth. Its edges are nicely finished, with no exposed fret tangs or finishing issues. I’ve never been 100 per cent convinced by Danelectro’s use of aluminium nuts – it’s part of the heritage and part of the reason why the instruments sound so open and bell-like. 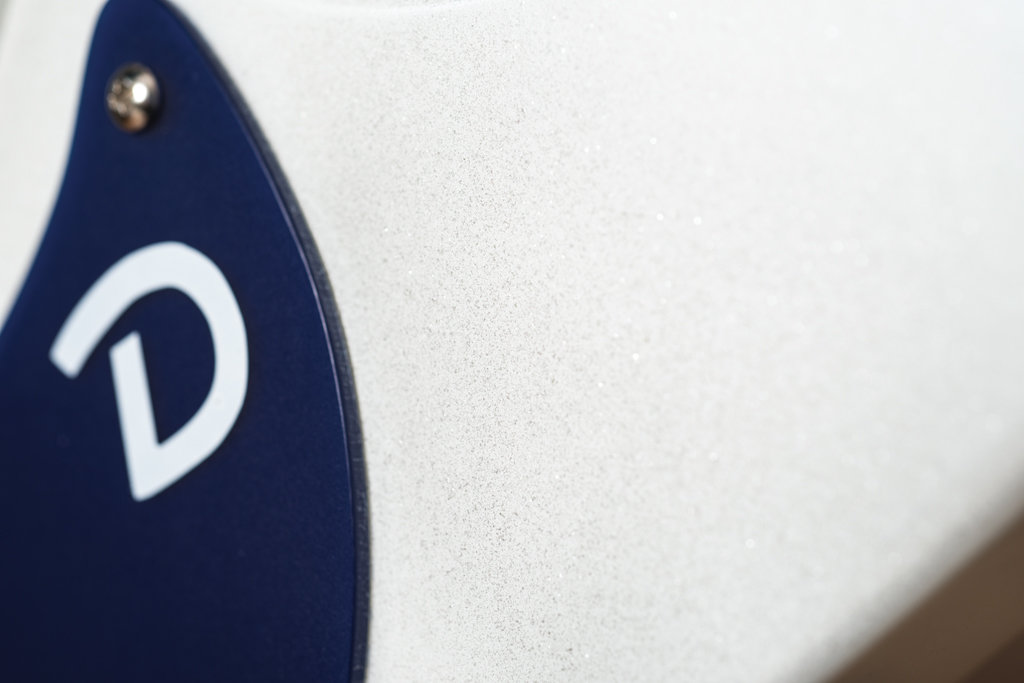 However, they need to be very well maintained and potentially lubricated to avoid string creep and tuning issues. While the electrics are simple enough, there’s an inevitable Dano twist: the cylindrical Lipstick pickups (so called because of the metal tubes that were used initially in the manufacture) are spring mounted and height adjustable from the back of the guitar.

They’re wired in series (unlike most electric guitars), so instead of hum-defeating phase cancellation with both pickups on we get a higher-output sound that’s very full and rounded. As well as a three-way selector switch, we also get dual tone and volume controls – these are stacked rather than separate, and this seems to work well in practice.

Wow! The construction really makes a difference. Traditionally, the closed-chambered construction of a ’59 gives a controlled acoustic tone with a strong emphasis to the upper-midrange. This instrument immediately sounds more open, with a very even frequency response.

There’s a charming, piano-like clarity that’s very appealing. The sound is more rounded than, say, a chambered Telecaster but less acoustic than a centre-blocked ES-335. A surprising amount of sound is projected from the f-hole itself, so the guitar is louder acoustically than the standard Double Cut. 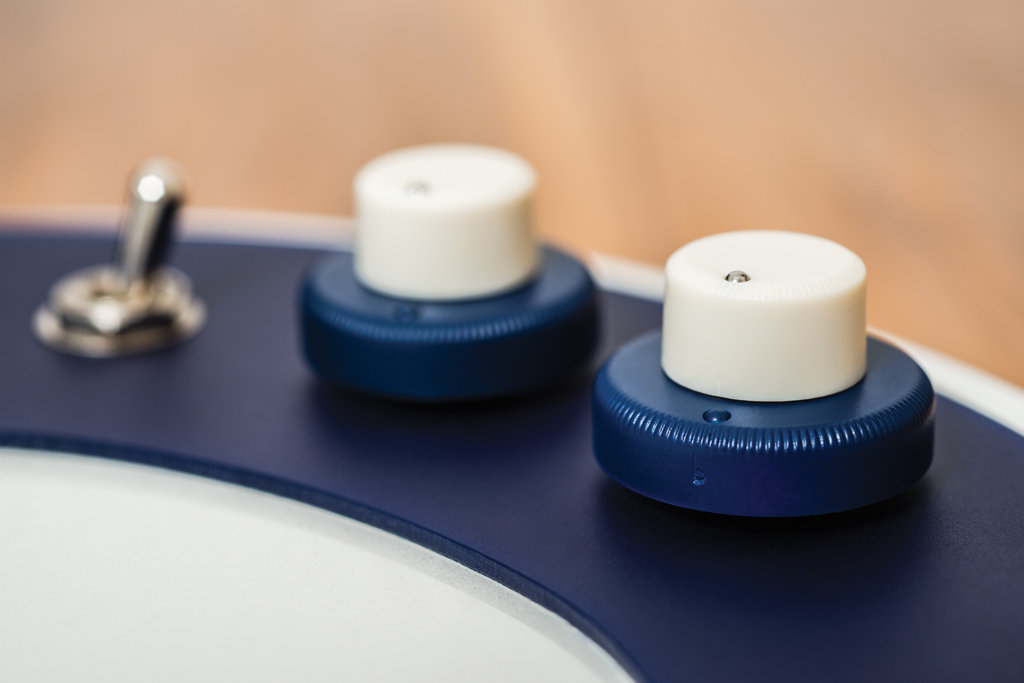 All of this translates well into the electric character. The single-coil pickups are adequately microphonic to pick up all the tonal nuances and playing inflections the instrument can deliver. The Spruce will certainly feed back if you want it to, but not in an uncontrollable way.

The bridge pickup delivers biting lead tones and plenty of 60s-style jangle. You might find yourself wanting to tame its surgical brightness at times – this is easy to do at the amp end of things – however, the onboard tone controls are a bit `all or nothing’. 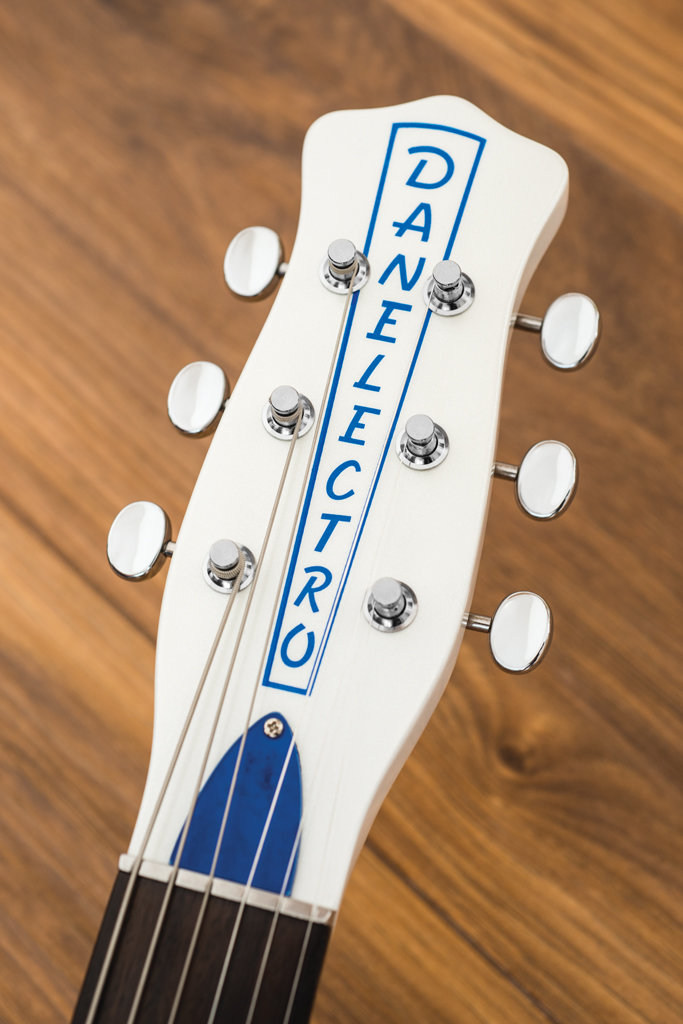 Experimenting with capacitors post-purchase is neither difficult nor expensive. The neck pickup is much more mellow; together, the pickups represent possibly the best-kept Dano secret: a big, wide-spectrum voice. It’s great for simply strumming chords and, while it loves to be driven hard, my preference is for an amp running around its break-up point. Sauce things up with some delay and reverb and forget about the rain outside!

The ’64 created quite a stir at this year’s NAMM show; while Danelectro’s Hodad, which came out in ’99, had a clearly Mosrite-inspired shape, this ’64 is nothing short of a loving homage to the Ventures model and the two-piece solid body boasts the distinctive German carve.

It’s not a slavish copy, though; the presence of a dual humbucking Lipstick at the bridge with a coil split to enable humbucking/single-coil operation is pure Hodad. There is, however, a traditional-looking single coil in the neck position and – Mosrite-style – it’s angled for a more even response. 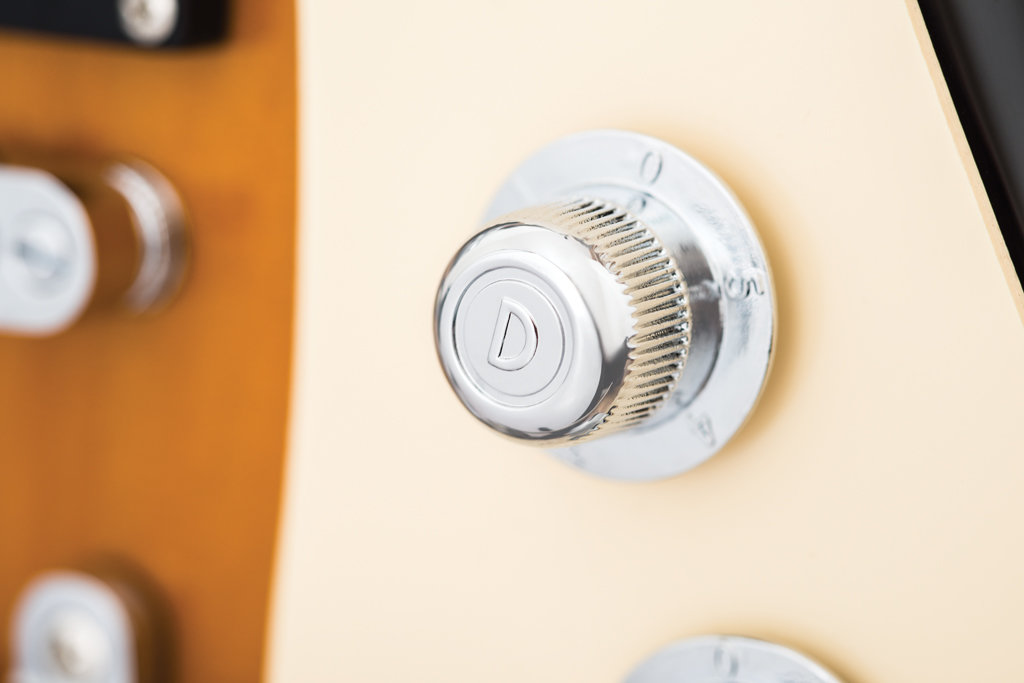 The neck is bolted on using a peanut-shaped metal plate. Technically, it’s a 22-fret instrument, but that includes the zero fret. This is a feature common to many guitars from the 50s and 60s, Mosrites included. The nut serves simply as a string guide and the strings intone over the zero fret, where they contact directly.

This can precipitate a particular slinky action. Not everyone likes zero frets (for a particular generation, the memory of busted and badly set-up English and European guitars is hard to dispel), and for the most part they’ve dropped out of common usage. Personally, I love the feel of a neck with a zero fret, and if you’ve never tried one I recommend it. 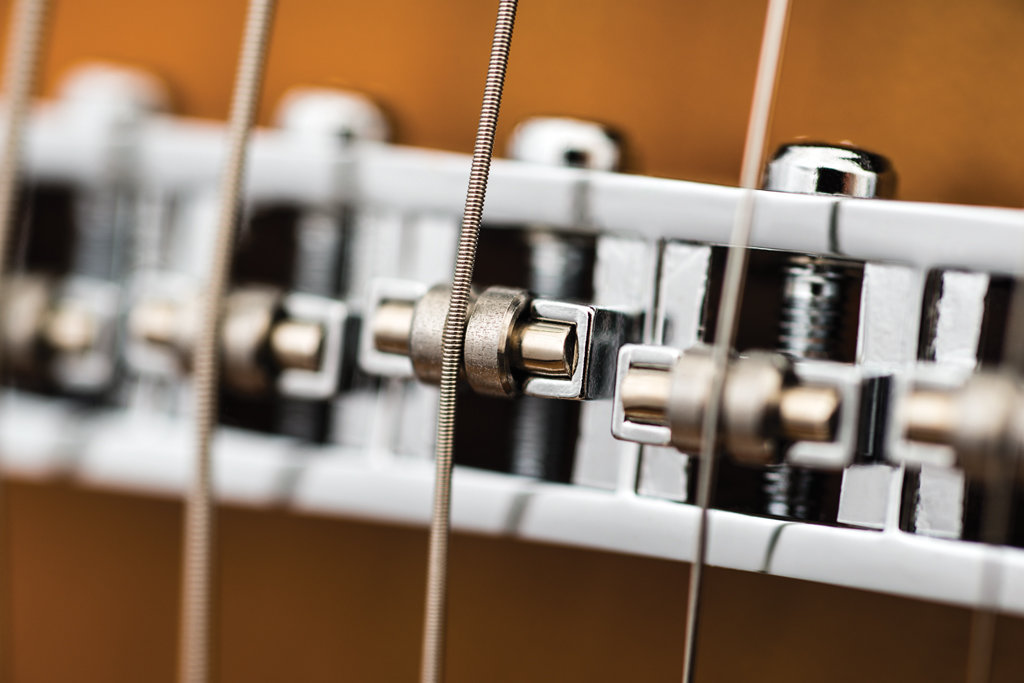 The ’64 features a licensed Bigsby vibrato; a suitably classic touch but not quite the same beast as the Mosrite Vibramute. The Bigsby is an ideal alternative and, if treated respectfully, will deliver vintage-style bends while the guitar remains in tune. The tune-o-matic bridge’s roller saddles help this a great deal.

While the Hodad pays more lip service to the Danelectro tradition, the ’64 riffs on a different theme. That’s not to say it doesn’t feel and sound great – it does. However, it doesn’t feel especially like a Danelectro. Realistically, the bridge pickup is the only signature Dano feature.

Using the coil split means that the bridge pickup can deliver a huge range of different voices – and the single-coil tone is the most definitively Danelectro. You can switch very effectively between single-coil and humbucking modes for rhythm and lead parts, too. However, there is an ergonomic issue; unless you use an angled jack plug, the bar of the Bigsby rests over the tone knob, making it hard to engage the coil split. 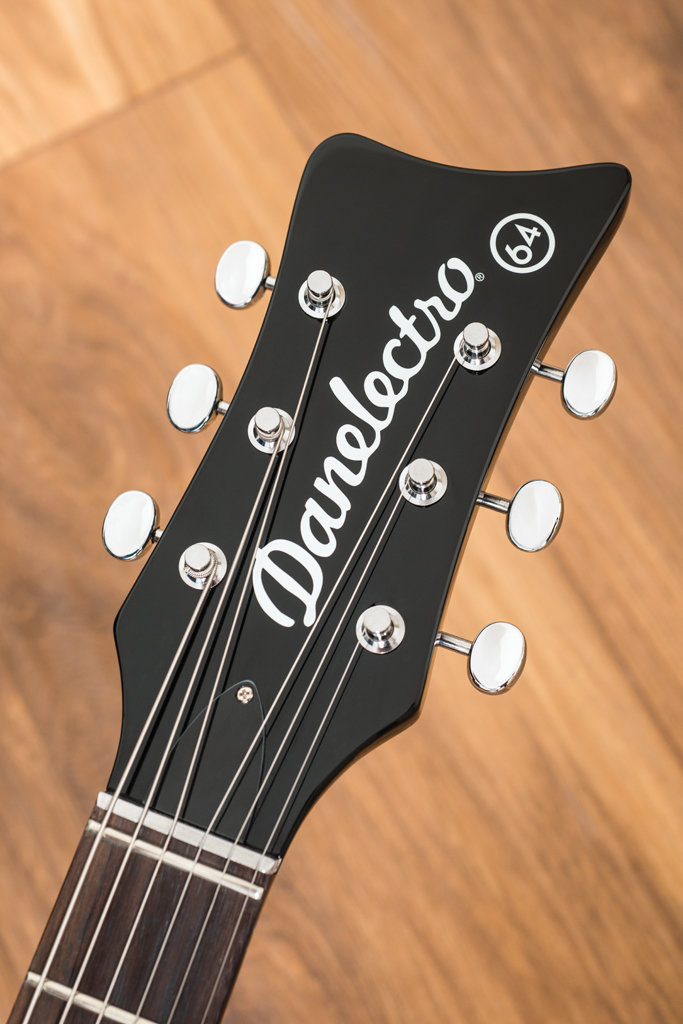 Played clean, the humbucking mode has something of a midrange hump that feels a little boxy. However, this translates into exceptional lead tones when driven hard because these forward mids are where you find singing tones and a lot of the pick-edge articulation. The neck single coil has a character all of its own: very open and more toppy than a P-90, but not exactly Strat-ish either.

It’s warm, but chimes nicely and is great for pop, country and jazz. It’s better at bluesy midrange break-up than it is at high-gain hard rock, but that’s to be expected; you can combine it with both bridge pickup settings, so there’s bags of flexibility and some signature sounds to be had. 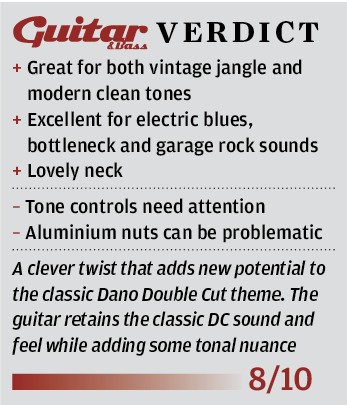 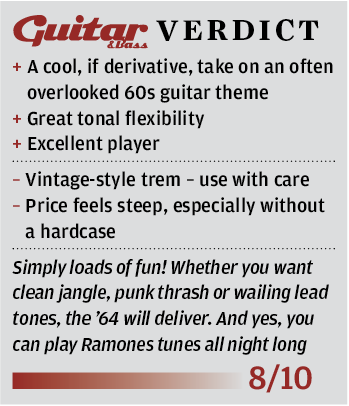