If you’re looking for some real jazz-age glitz and glamour then these handsome D’Angelico archtop electrics will teleport you back in time. 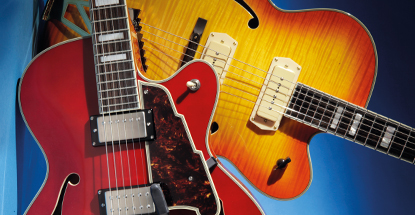 There’s no denying that D’Angelico guitars make a strong visual impact, and there are plenty that will fall in love with them on looks alone.

These instruments can trace their origins back to the New York workshop of John D’Angelico during the Jazz Age, and although the brand’s new owners have moved production to Korea, art deco styling still abounds, with a brushed metal ‘skyscraper’ truss rod cover and classic ‘stepped’ motifs on the tailpieces, the pickguards and the Grover Super Rotomatic tuner buttons. 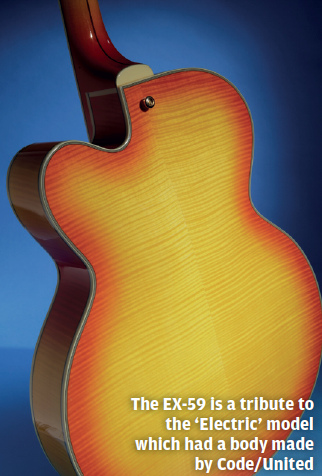 EX-59
The EX-59 is fitted with two P90s, and the body is made from flame maple laminate with five-ply binding on the top and three-ply on the back, plus bound f-holes. The finish is vivid, graduating from a yellow amber centre to a darker edge that’s on the orange side of cherry. In classic jazzbox style the neck has a sandwich construction, with two sections of hard maple and a centre strip of walnut. Despite the sizeable body, the neck profile feels fairly slim and fast.

Some artifice occurs at the headstock with a faux ‘stinger’ that is actually painted rather than a strengthening veneer. In jazz circles the D’Angelico headstock shape is as iconic as anything Fender or Gibson ever dreamt up, and although the classy pearl inlay appears to be some sort of plastic overlay, it looks great. 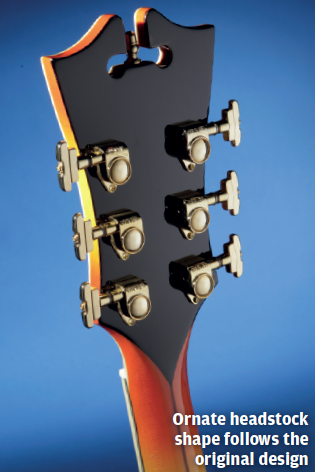 However, the headstock is so thin and the nut so thick that the back edge of the nut makes no contact with the front surface of the headstock; the truss rod cover appears to be holding it in position. It’s the same situation on both guitars, and this poor nut installation is at odds with the otherwise precise detailing.

Real pearl is used for the block inlays along the bound fingerboard, which is rosewood to match the carved bridge. All the hardware is gold-plated and matched with cream plastic parts, aside from the black chickenhead pickup selector. Unfortunately, the knobs, pickup covers and surrounds don’t have the same ‘high end’ look about them, which is a shame considering that this otherwise impressively-built model retails for over £1000.

We were also disappointed to see that the thickness of the bridge pickup surround is not tapered to compensate for the arch in the top, and consequently the pickup leans towards the bridge at an angle. 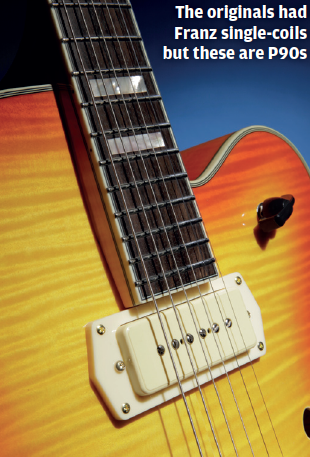 Even if you’re used to playing acoustics or hollowbody Gretsches, you might find the EX-59 a bit of an armful. The big, heavy headstock, combined with a full 17″ wide, 3″ deep body means the EX-59 takes some getting used to on the strap, but played sitting down it’s fine. Our guitar arrived with an action that was higher than necessary to ensure buzz-free fretting, with little scope left for downwards adjustment, but lowering the bridge a touch did improve the playability.

Sounds
The EX-59’s acoustic response is so loud and lively that quite some time may elapse before you feel inclined to plug it in. As you might expect from a maple bodied guitar (laminated or otherwise), the tone is bright and fairly percussive. String-to-string balance is good too, and the ample sustain makes unamplified soloing just as pleasurable as comping out chords.

For reference we compared the EX-59 with a fully hollow Gibson ES-330 in order to gauge the tone of the D’Angelico’s P90-style pickups. Although the acoustic tone of the body obviously plays a part, we found the D’Angelico versions somewhat brighter and clearer, although perhaps not quite as smooth and sweet. 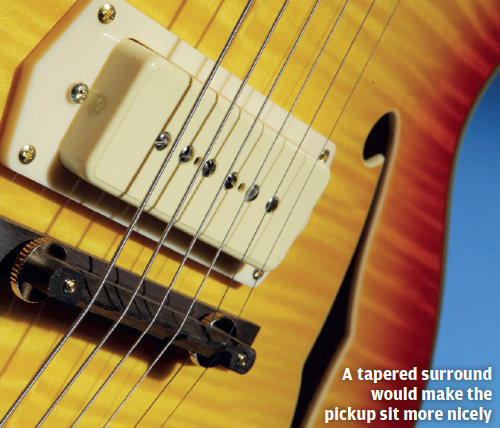 The rotary pickup selector switch isn’t designed with ultra-fast changes in mind, but don’t ignore it as all three settings have much to offer. The neck position is free from bass boominess and stays clear and controlled across all the strings. This is where single notes sound their fullest and roundest, and the tone is well suited to blues and jazz – particularly when the tone control is backed off slightly. In contrast, the bridge pickup provides a solid thump in the bottom end, laced with a surprising degree of twang.

For us the standout pickup setting is the middle position, for this is where the EX-59 acquires a hint of phasey hollowness with a particularly interesting harmonic chime on top. Try some Travis picking, and you’ll find you can pull off a fairly decent impersonation of a DeArmond-equipped Gretsch hollowbody or even Scotty Moore’s Gibson ES-295 (the other thing worth mentioning is that an even more mellow sound can be achieved by lowering the pickups). This guitar has a range of fine hollowbody tones that cover old-school jazz and beyond.

The pickups are very sensitive and articulate, so you can alter the attack and overall timbre by using various gauges of plectrum – on balance, we preferred the way the EX-59responded with thick jazz-style picks. 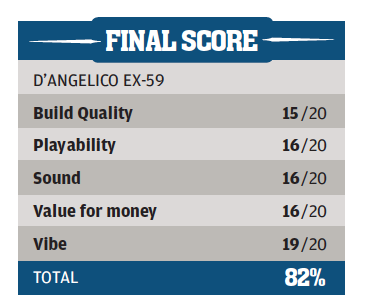 EX-175
Although it’s a new design, the EX-175 retains many of the characteristic D’Angelico features and one look at the headstock will leave you in no doubt about this guitar’s origins. Then there’s the stepped pickguard with its multi-layer binding, and a set of art deco-inspired control knobs that wouldn’t look out of place on a Bakelite radio.
Even so, the EX-175 is something of an enigma. The ‘175’ model designation was almost certainly co-opted for a purpose, but there’s no Florentine cutaway… in fact the body shape most closely resembles the models Yamaha started producing for artists like George Benson back in the 1980s. 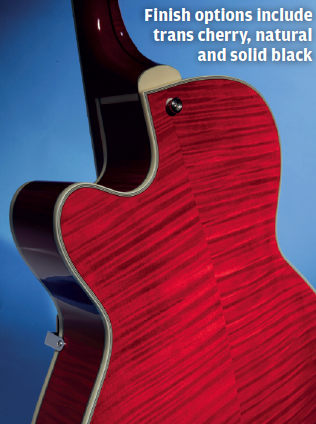 Both the neck and bridge pickups are humbuckers, and they ohm out at 10.8K and 12K respectively. The neck pickup looks like a conventional PAF-style unit, as you might expect, but the bridge unit’s two rows of height-adjustable polepieces are probably intended to make it resemble a Filter’Tron.

A Bigsby is supplied, along with a roller bridge, but there are some issues here. Only the front end of the unit is intended to make contact with the body – albeit via the cushioning effects of two felt discs. On the EX-175 the bass side is floating above the body so the whole assembly twists on its hinge whenever it is being used. We placed a wedge underneath to stabilise the unit, which made a noticeable improvement to the Bigsby’s responsiveness. 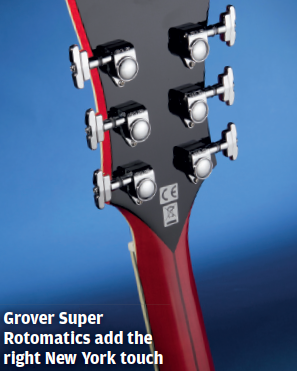 The EX-175 has a fully hollow body with a 15.5″ wide lower bout and a depth of 2.75″, with no Gretsch-style trestle bracing nor even a soundpost to hold the structure together more rigidly. The top is formed from laminated spruce, with a flame maple laminate for the back and sides. The front and back of the body have off-white seven-ply binding which contrasts well with the cherry finish.

The materials, construction and decoration of the EX-175’s neck are identical to the EX-59’s; our example had a hint of flame in the maple, but this will vary from guitar to guitar. The EX-175 is also available with natural and black finish options.

Sounds
Compared acoustically to the EX-59, the EX-175 is noticeably less resonant and lively. It has quite a sweet and pleasant unplugged tone, but the reduced volume and brightness is indicative of a more solidly-braced instrument – which fits with D’Angelico’s statement that the EX-175 is ‘made for players seeking the new rock edge D’Angelico provides’.

The advantage of the sturdier build is that the EX-175 is slightly easier to handle because the transient response is a little more subdued. This, in combination with pickups that are smoother and less bright, makes for a guitar that requires a lot less amp tweaking to dial in a tone… although players who prefer edgier instruments with more distinct sonic character may find they prefer the EX-59. 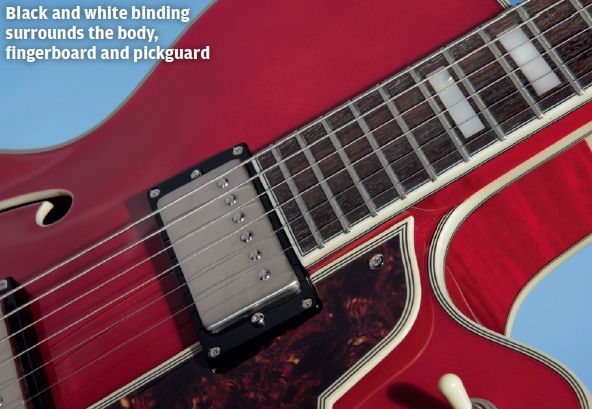 The EX-175’s pickups produce a strong tone but they do not have inappropriately high output. There’s a pleasing degree of sonic contrast between the pickups too, with a conventional but very pleasing jazz tone from the neck and a bit of midrange honk from the bridge. Through an amp’s clean channel you should be able to maintain an overdrive-free tone without needing to turn the EX-175’s volume controls down.

Those looking for a big-bodied guitar for playing overdriven solos may find the EX-175 lacking in sustain and a little prone to feedback. Then again, there’s no centre block, and its character is certainly commensurate with most fully hollow guitars. Another issue, which would be easier to remedy, is the slightly stiff playing feel. The scale length is a full Fender-style 25.5″ and this, combined with the fairly robust set of strings supplied, didn’t make for finger-friendly bends or vibrato.

Overall, however, the setup does demonstrate that the EX-175 has the potential to be whatever you want it to be. String it up with heavier gauge strings, or even flatwounds, lower the pickups and it would be a more than capable instrument for the jazz purist; set the pickups closer to the strings, put on a set of 10s and you could have a lot of fun playing rockabilly, rock or even fusion-style material.

Verdict
Although both guitars are solidly made and well-finished, there were some causes for concern with the nuts and the Bigsby installation. Even so, these are fine-sounding guitars that offer different takes on the jazz formula. With a little more attention paid to detail, they would be very hard to fault. 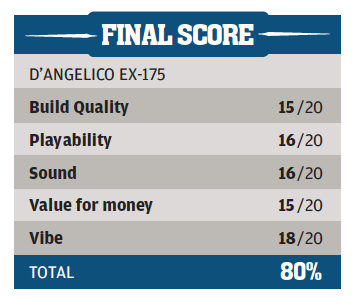