This ‘polyphonic detune pedal’ promises to make everything sound better – and that is a very, very big claim indeed. 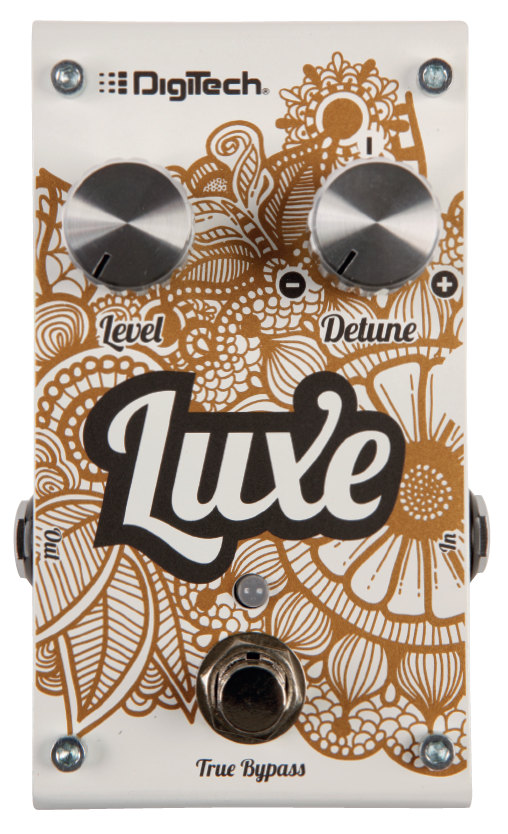 The first few decades of pop music saw engineers tampering with studio equipment to create a host of wondrous ‘colour’ effects, from chorus and flanging to swirly phasing and Leslie-style vibrato… and we’ve pretty much stuck with them ever since.

Well, what else can you do to a guitar without making it not sound like a guitar? The appeal of a pedal that can add shimmery depth to your tone in a new way is obvious – and Digitech reckons it has just such a product. They’re calling it an ‘anti-chorus’, and we’re about to find out if the story of guitar effects is suddenly in need of a new chapter.

The Luxe uses digital pitch-shifting – specifically, an algorithm borrowed from the company’s infamously zany Whammy pedals – to add an extra ‘voice’ to your signal.
The detuned sound is not modulated, as it would be by the low-frequency oscillator in a standard chorus pedal, so we’re promised all the lushness with none of the pulsating wobble. It’s not the first time anyone’s done this, but it might be the first time the effect has had its own dedicated stompbox.

The Luxe lives in a low-slung white metal case with an extravagantly flowery design and two encouragingly ‘industrial’ silver knobs. It’s a neat little chunk. There’s no battery operation – digital effects munch through PP3s like rats through a Christmas pudding – but the power supply is included in the box.

On the front of the pedal we have a Level control for adjusting the depth of the effect, and a Detune dial with 50 cents below pitch at one end and 50 cents above at the other.

Sounds
If we start with the Detune knob dead on the halfway line, the affected signal will be in tune with the dry – so will the pedal be effectively off? Not quite. Bringing up the Level gradually, we hear just a hint of watery strangeness seeping into the tone, and if we then knock the effect out of tune by just a few cents either way, the lushness begins to flood in.

It’s basically a chorus/flange-type effect, adding an artificial kind of depth to the tone that can get rather metallic. Still, while the core sound is more or less familiar, it’s true that the rhythmic element is greatly reduced… though not gone completely.

As you’ll know if you’ve ever played octaves on a guitar with dodgy intonation, two notes that are not quite in tune will create a bit of a throbbing effect anyway. It’s nature’s way of begging you to adjust your bridge saddles.

This is a two-knob pedal, but you could almost call it one and a half: the detuning is symmetrical, so the effect sounds virtually identical at nine o’clock and three o’clock. Only at the furthest extremes can you really feel the detuned signal veering away from the original note in one direction or the other, and here the modulation is fast and heavy – it’s a pretty freaky kind of sound, not quite as atonal as a ring modulator, but close.

Verdict
Sadly for anyone expecting a revolution, the Luxe is at its best when it’s subtle – which is exactly when it sounds most like a conventional modulation pedal. Still, Digitech deserves credit for doing something different, even if it doesn’t sound quite as different as it looks. 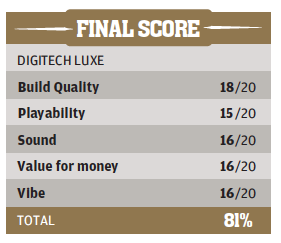