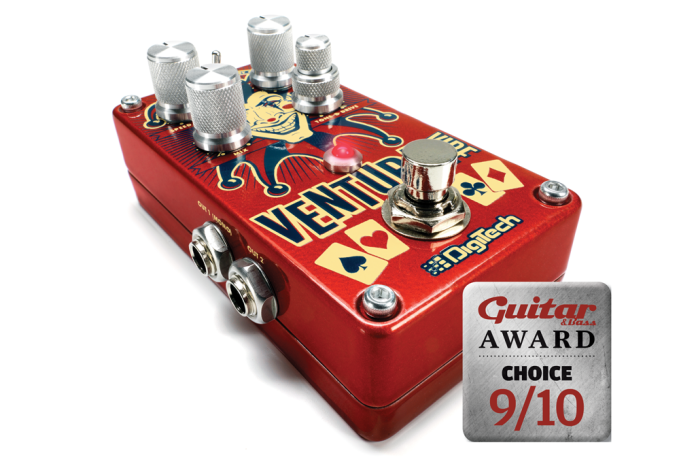 What fools we are. We spend all our time and money trying to get our guitars sounding as pure and perfect as a freshly ironed wimple, then go and garble them up with modulation effects. Maybe that’s why DigiTech put an image of a medieval fool on the top of the Ventura Vibe.

Of course, there’s nothing wrong with a bit of `garblage’, and the vibe effect – not pure pitch vibrato, but somewhere between the sweet wibble of a chorus pedal, the vocal throb of
a fast phaser and the woozy swirl of a Leslie rotary speaker – can be a real song-lifter.

The original Shin-ei Uni-Vibe was intended as a rotary speaker simulator, but didn’t quite nail it; thus, a whole new effect category was born by accident. This digital unit offers two variants on the Uni-Vibe sound – vintage and modern – plus a fresh stab at the Leslie thing. It has stereo outputs, and we’ll be making use of them for maximum immersion.

There are also a couple of other features that recall dedicated rotary sims such as the wondrous Neo Ventilator: onboard overdrive and a speed-ramping feature accessed by holding your foot down on the footswitch. Other than that, you get controls for speed, depth, mix and toneº and no battery compartment; you’ll need a nine-volt power supply to feed that greedy digital processor.

Leaving the drive at zero for now, we’ll kick off in vintage mode with the other dials at halfway. It’s vintage alright – like an asymmetrical phaser with a deeply liquid quality. Pushing the mix past halfway reduces the tonal sweep, emphasising the pitch-changing vibrato aspect; the other controls behave as you’d expect, offering a wide range of sounds.

Dialling in some drive thickens things up in a nicely musical way, but if you want to replicate Jimi’s Uni-Vibe sound from Woodstock, you’ll need a fuzzbox (plus a couple of Marshall stacks and a big field).

Flicking over to the modern setting, the first thing we hear is a second or so of silence – don’t do this mid-song. Then, we get a more bright and chorus-like sound, quite flange-y at low speeds, and with even-more-pronounced pitch wobble when you crank the depth and mix knobs. Rotary has a more gentle, almost mid-scooped voice, and here’s where the tone control might be useful for bringing out the top end. The effect itself is pretty good clean and gets more interesting when you push the drive – it really has that Leslie grind, and will get you very, very close to the Badge sound.

The stereo effect works well in all three modes, and so does the ramping feature: keep your foot on the switch and the modulation will wind up quickly to maximum speed, then slow down as soon as you lift off.

All in all, the Ventura Vibe is a fun pedal to use, with three highly creative effects, plus useful acceleration and overdrive features. 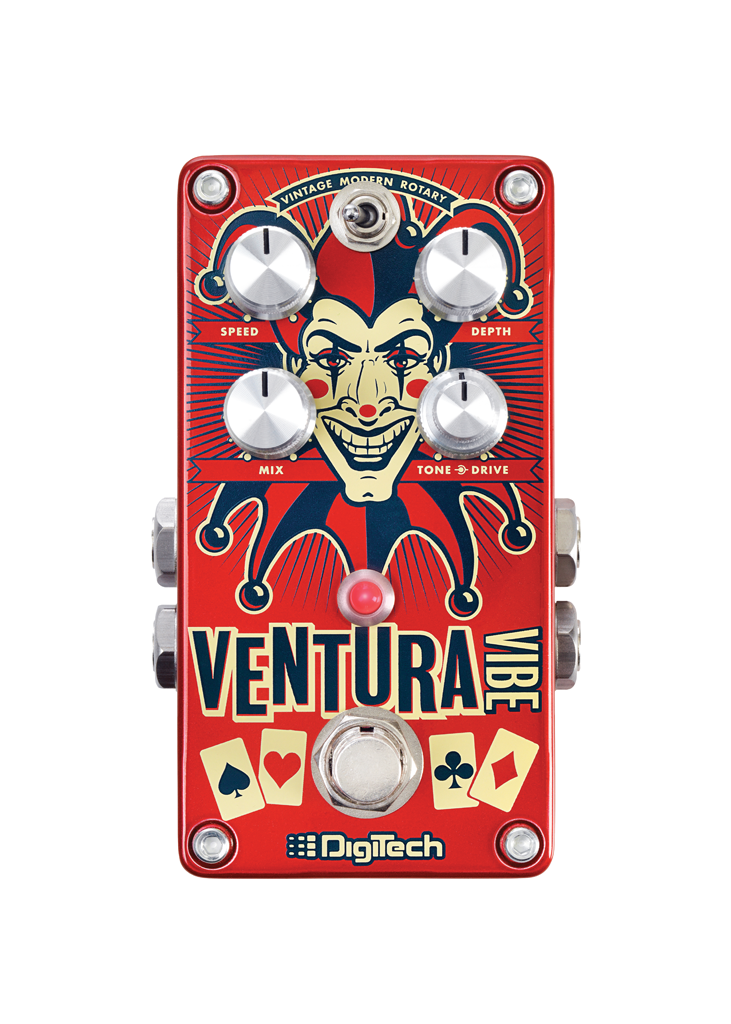 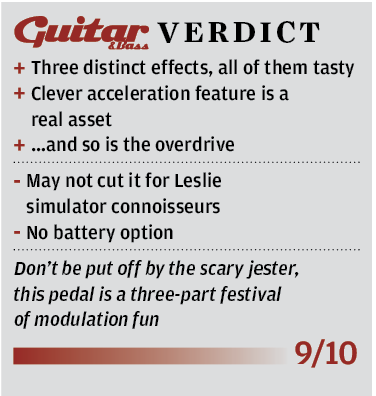